LEGO Ideas sets are set apart by their uniqueness and creativity, and the #21315 LEGO Ideas Pop-Up Book is no exception. Trying to recreate a paper origami design with bricks is mind-blowing. Actually doing it is incredible. 🙂 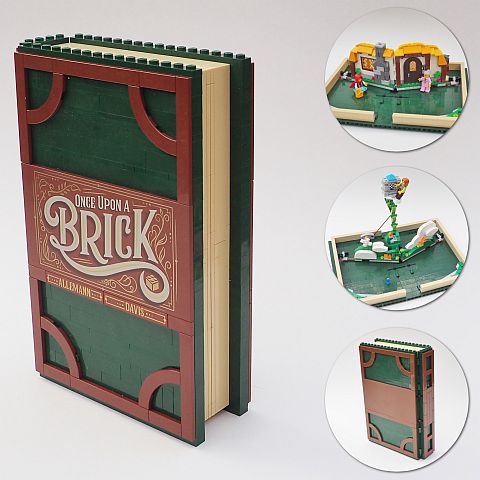 As a LEGO builder, one of the first things that grabbed my attention with this set was the potential for building MOCs (My Own Creations) that could work seamlessly with the book template. So for this review, I am going to focus on explaining the dynamics and dimensions of the LEGO Ideas Pop-Up Book. Whether you have the book or not, exploring the functions built into this LEGO set is a rewarding experience! 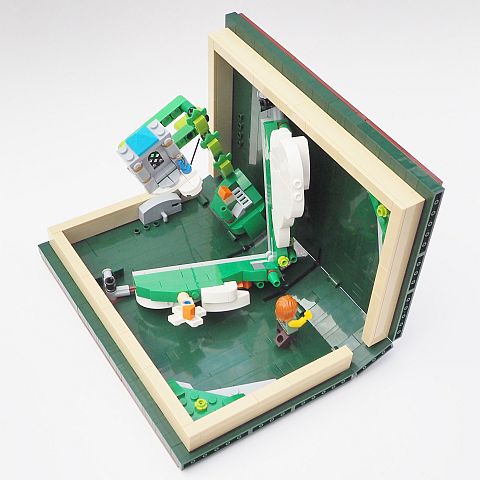 In many respects, the mechanism for creating the basic pop-up scene is simple, but it’s also brilliant. The main part of each story scene (Jack and the Beanstalk and Little Red Riding Hood) is built on top of a pair of basic 12-stud long by 2-stud wide LEGO plates. These two plates are attached by a hinge-brick that will allow them to fold on top of each other, making for a 4-stud wide scene when folded, and a 24 stud long scene when unfolded. Take a look at the folded Jack and the Beanstalk scene to see what we’re talking about. 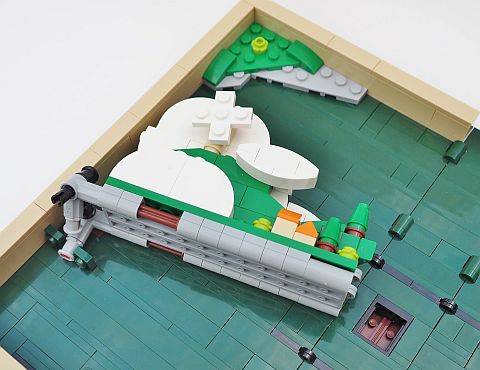 Notice that nothing is sticking out beyond the 4-stud width, and note that 4 studs is the exact width of the spine. Notice also the green cheese-slope coming out on the right which will help prevent the final scene from opening more than it should. For a more in-depth explanation of the hinges and the window built into the spine, see William’s Brick Breakdown: LEGO Ideas Pop-up Book article.

Grandmother’s cottage from the Little Red Riding Hood scene makes even better use of the available space. Almost every nook and cranny left open by the fixed bits of scenery is used up! 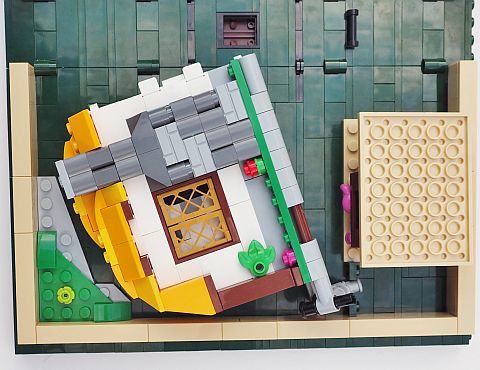 The second technique used for the scenes is fixed scenery. Obviously, height is strictly limited in these cases, so a bit of grass or a bed and table have to cover all the bases. As you can see in the above picture, it’s important to make sure that fixed parts of the scene won’t clash with each other; notice how grandmother’s table and bed are located on opposite sides of their respective 6×8 tan plates. In fact, grandma has to be careful not to leave the handle of her teapot sticking out, or the book won’t close! 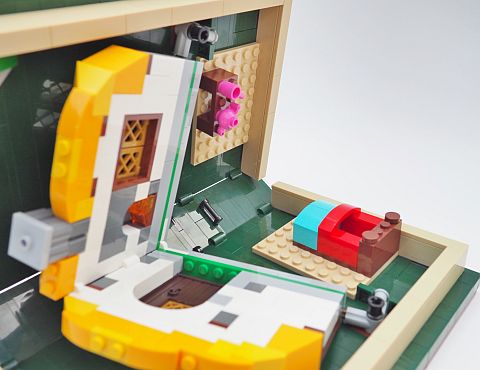 A third technique used in the set involves a double hinge that allows the Giant’s castle to be lifted about two inches higher than anything attached to the spine could otherwise reach. In order to achieve the height, it was important that the width of the closed contraption is only 4 studs. This is why the beanstalk is off center; when closed, the rest of the beanstalk can lie next to it on the left side. I have to say, I am in awe of the ingenuity of this mechanism. While grandma’s house is bigger, it feels like something I could possibly have invented myself. The rising castle, on the other hand, is simply brilliant and so much fun to watch unfold! 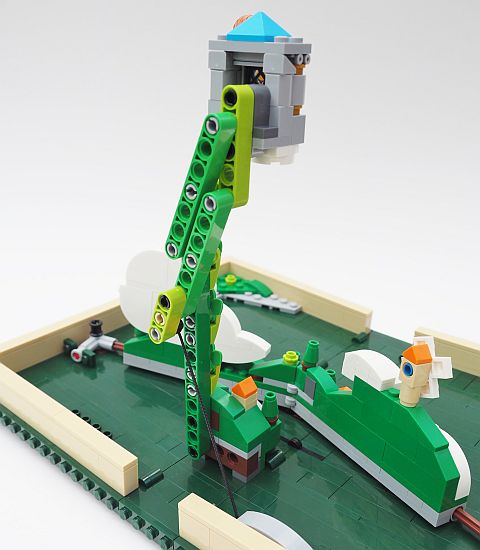 The attachment points for the fixed scenes are 4 studs in each corner and 4 studs along the top. The folding main scenes are attached with LEGO Technic pins, sandwiched between 2×1 plates that stick up out of the book, keeping the scene at an angle. You may also have noticed the brown LEGO Technic bars that the scene slides on in order to open smoothly. And, finally, the attachment for the beanstalk is a clip and bar connection built into the spine and the base of the hill. 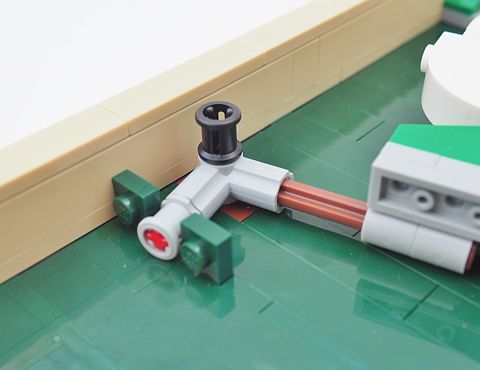 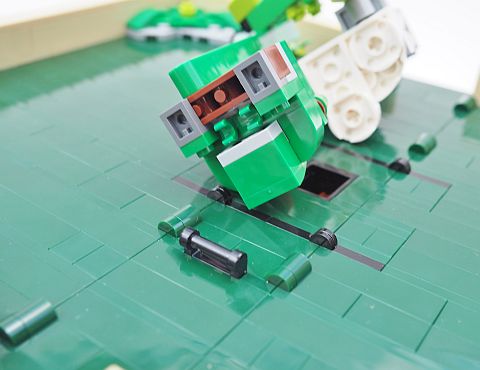 Now that we’ve explored the mechanism behind the LEGO Ideas Pop-up Book, let’s discuss the looks of the set! First of all (true story!), you know you’ve got a great LEGO set when the TSA agent inspecting your backpack exclaims in awe when she opens it up. I have been showing this set to everyone I can; all their reactions have left me wishing for that I was one of the original creators! This set really pushes the boundaries of what can be done with LEGO bricks. It’s great as a display piece, and it has lots of play value as well. Not only is it a pop-up book (which, I guarantee, you will never get tired of unfolding), but in true LEGO fashion, there is a story – actually two stories – begging to be told. In this respect, the scene for Little Red Riding Hood scores one over Jack and the Beanstalk. Three minifigures, a bed that a minifigure can slip into, and a pink teapot definitely offer more storytelling potential than an oversized beanstalk, undersized village, and a castle that is about the right size for the Giant’s oven. 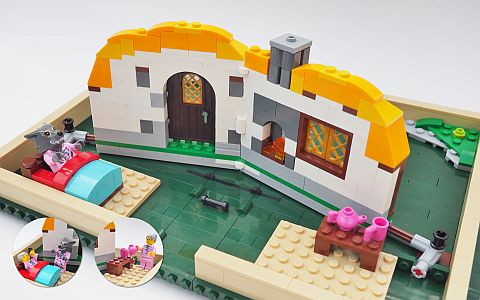 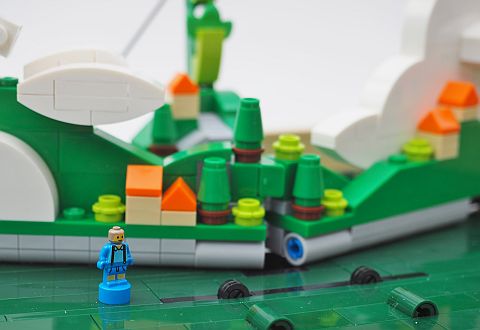 On the subject of the Giant, he does look somewhat like what I imagine Little Red’s lumberjack father would look like (if that’s your version of the story). It’s too bad the set doesn’t come with an ax!

As you can see, all four minifigures and the nano-figure are carefully printed. I’m especially impressed with the goose and golden egg on the Giant’s torso! Little Red’s skirt is also worth pointing out.

When it comes to the exterior of the pop-up book, the printed 8×16 “Once Upon a Brick” tile is beautiful, although, sadly, the gold on that tile is not quite the same shade as on the smaller tiles with the fan designers’ names.  It also scratches pretty easily. Personally, I don’t really appreciate the exposed studs on top, but that’s not difficult to change (provided you have enough dark green tiles). And I do appreciate the motivation if the designers wanted to keep a LEGO look a bit LEGO like to what otherwise is very much like a large book. Lastly, the spine view of the book is pretty awkward, which is mostly inevitable in order to allow room for the hinging covers, but could perhaps be toned down a little by using two 4×2 brown tiles and a few 4x1s instead of two 8×1 tiles and six 3x1s (which leave quite a few strange lines, not to mention some glaring asymmetry). Below left is the actual spine, right is my suggestion. 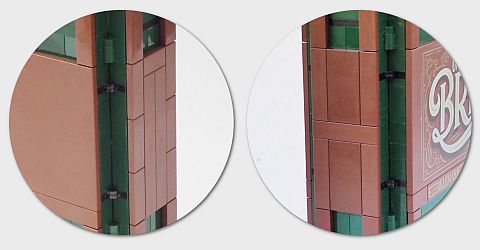 In summary, this is a LEGO set that will impress casual viewers and die-hard fans alike.In many respects, this set goes the extra mile in creativity and cleverness. I for one am looking forward to experimenting with some scenes of my own! 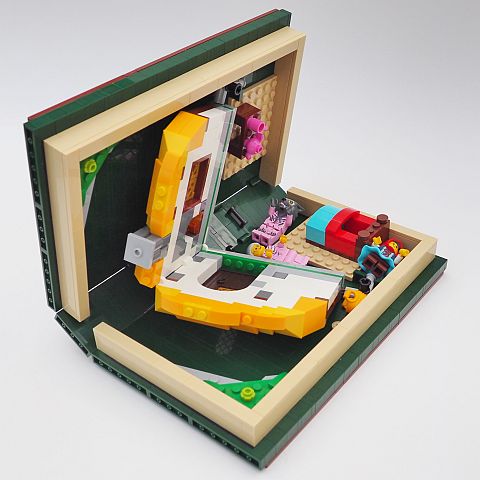 What do you think? How do you like the LEGO Ideas Pop-Up Book? Are you planning to try your hand at some alternate scenes? Were you also impressed by the clever techniques used to make this book work? Be sure to share your comments and questions below! 😉 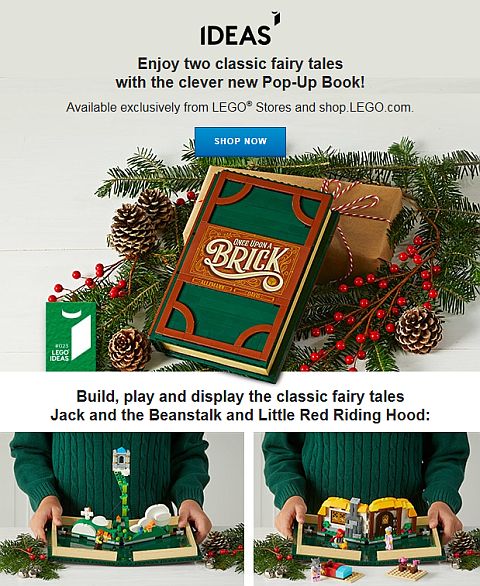