In this series, I have been sharing my own personal story in the LEGO hobby, including slowly building up a collection of sets from the 1970s to the 1990s, and constructing a LEGO city. If you like, you can read Part 1, Part 2, Part 3, Part 4 and Part 5 by clicking on the links. For today’s chapter, I will discuss the transportation system in my LEGO city… 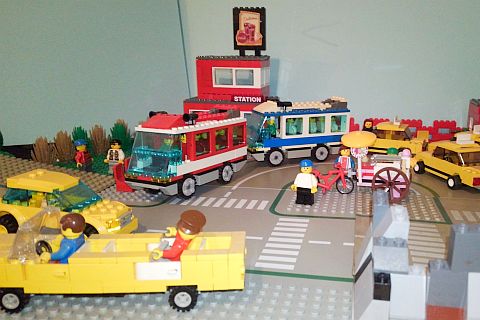 What’s a town without a transportation system? What’s a city without train connections to the outside world? My LEGO city railroad has three independent sections. The main line is built on the floor and can be described as a lop-sided dog bone that more or less circles the layout. It crosses bridges going across the river to and from the port/peninsula area. There’s an industrial spur going to the paper factory and a short passing siding by the port. 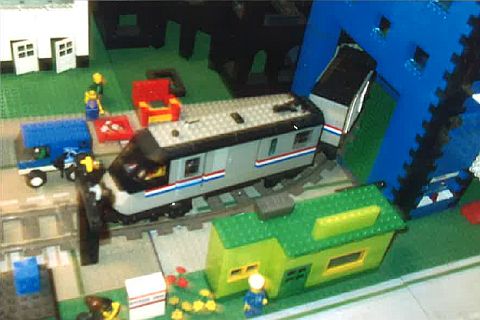 The second train line is about twenty feet long. It starts as an elevated line and becomes ground level when it crosses to a slightly higher shelf. The line serves both passenger and freight traffic, and has a siding for freight cars at one end, as well as a passenger terminal. Since it does not make a continuous loop, I haven’t bothered figuring out how to electrify it. 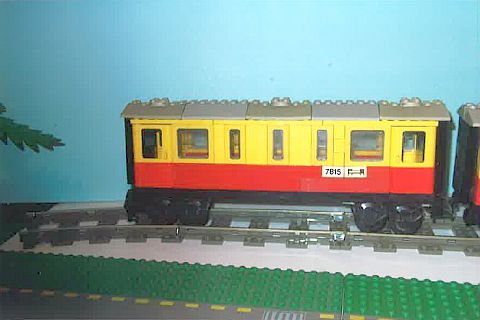 The shortest train line is only about eight feet long. Built on a shelf, it comes out of a “tunnel” (the wall) and has several sidings serving various industries. There’s a small switcher permanently assigned to the area, as well as a caboose, which is used to transport workers into and out of the area. At the far end is a covered platform for workers to disembark and report to their factory jobs. This part of the railroad uses the old gray plates with several switches (points.) 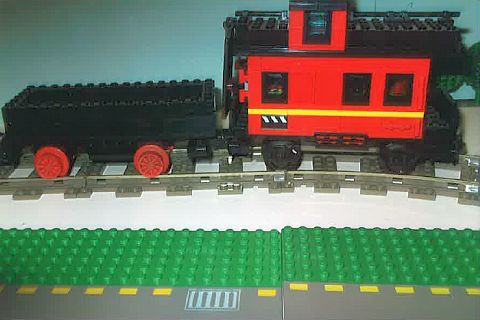 It is not worth the space for me to try and build ramps to connect the sections. I just pick cars up and move them between levels when necessary. 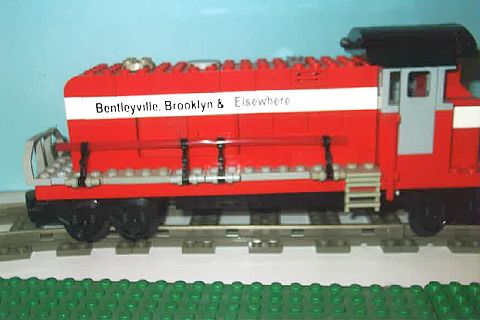 My railroad is named the Bentlyville, Brooklyn and Elsewhere Railroad, or BBE for short. Bentlyville (PA) was the small town where my mother grew up and Brooklyn is where I’ve lived my entire life. My town brochure describes the system as follows: There are four types of trains operating in and through the town. (a) Commuter trains which both circle the town and take passengers to and from town to the rest of the state. (b) Freight trains which make deliveries of raw materials and pickups of finished products in town. (c) Repair and service trains which are based in the local train yard. The yard performs routine maintenance and minor repairs on rolling stock, regional track, and railroad buildings. The engine sheds hold three large locomotives for servicing. (d) Tourist trains which provide service both in town and on excursion trips. Many of them are old steam locomotives and cars that are based in town.

When I first became interested in LEGO, trains were non-existent in the U.S. Eventually the company introduced grey plastic tracks in the states, with battery operated engines. Soon, there were also road crossings, freight loading platforms, and assorted train cars. At some point LEGO expanded their train line in the United States and introduced the nine-volt trains with metal tracks, mostly available through LEGO Shop-at-Home. I started buying train cars and eventually sets and additional train track. 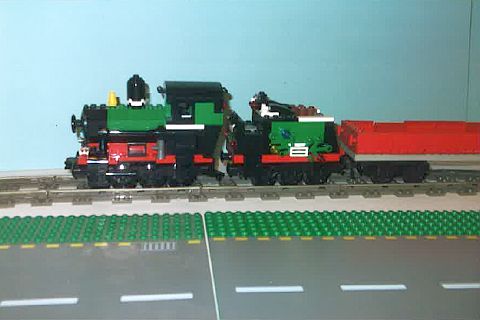 LEGO trains became its own obsession. I think the highlight was when I purchased the Metroliner (I think at full price) and it still circles my layout with a matching baggage car that I built. The #4561 LEGO Blue Railway Express was on sale. That’s also in my current layout (I think there’s another one or two in storage). The same goes for the original unpowered #10173 LEGO Creator Christmas Holiday Train from 2006, which I recall was on great discount at some point. I built two of them (I should probably remove the Christmas decorations) and there might be more packed away. The #10017 LEGO Hopper Wagon, the #10016 LEGO Tanker, and the #10013 LEGO Open Train Wagon were part of a nine-volt series. I have all three of them. And I also have the #10170 LEGO TTX Intermodal Double-Stack Car, the #4544 Car Transport Wagon with Car, and a four unit set of freight cars. I have a motorized trolley (my own design) that circles the town as well. 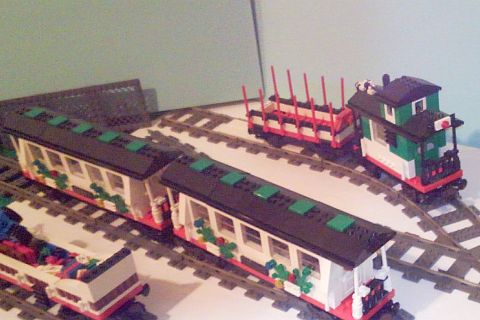 The town also includes various train buildings. There are four full-sized train stations, including the yellow #4554 LEGO Metro Station, the #7824 LEGO Railway Station, and a custom station built after I saw a train station pictured in the travel section of a newspaper. I also have the recently released #10259 LEGO Creator Winter Village Train Station, which I haven’t built yet. Then there are the nine-volt train accessories, like extra straight and curved track, points (I have about four – I should have bought twenty), and even a cross-track. 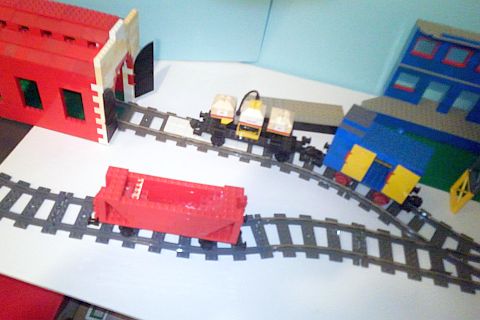 I also have the #7838 LEGO Freight Loading Depot from 1983, a train crossing set, and others. There are two road/track vehicles and an old fashioned handcar that I built. The #4534 LEGO Express with a blue passenger car was a Target exclusive, and the #4535 LEGO Express Deluxe with a green passenger car, log car, and caboose was a Toys’R’Us exclusive (I never actually built either of them.) And there is the #10183 LEGO Hobby Trains set from 2007, for which I only built the basic model. 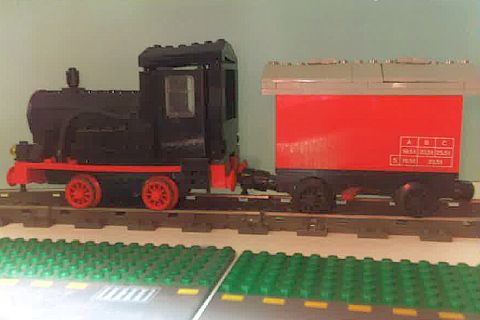 If only I had enough track space (even plastic) to show off all these wonderful engines and train cars! At this point, I think some are rare collector items. 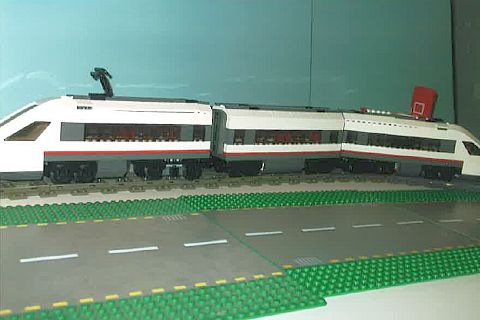 By 2006, LEGO had introduced remote control trains with plastic tracks (supposedly, metal tracks were too expensive to produce). I refused to go along with the change, however soon enough I couldn’t find any metal tracks to purchase, and no more individual rail cars being sold either. In 2016, I finally gave in and purchased my first two RC trains; the #60052 LEGO City the Cargo Train and the #60098 LEGO City Heavy-Haul Train. Just my luck, in 2018 LEGO introduced yet another new, non-compatible electric train system, but thankfully, at least it is using the same tracks. I’m not quite sure what to do at this point. After all, I have more than enough locomotives to service my town.

Public transportation should be a lot more than just trains. I have a custom-built open-sided trolley that is powered by a nine-volt train engine and runs on metal tracks. There are a few yellow taxis, mostly from the #4852 LEGO Spider-Man vs. Green Goblin The Final Showdown set. One day, I’ll get around to making them a little higher, so minifigures can properly fit in. There are also a couple of busses, and minibuses (vans from the LEGO Soccer sets). 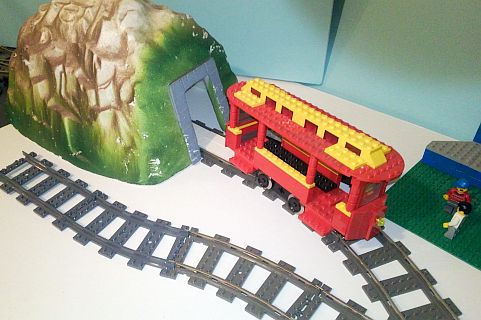 I recently built a 2 baseplate x 2 baseplate transit hub, so I could bring all the public transportation together – at least for a picture. However, I have no empty space in Legoland to place it. The hub has lots of indoor and outdoor seating, parking for waiting vehicles, a bus station with a bus dispatch office on the second floor, and a taxicab office. I also added a food cart, with a second one on the horizon, along with a bicycle stand. 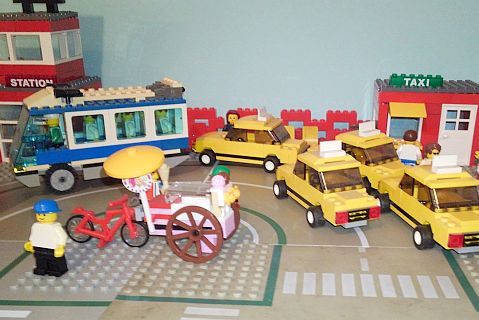 A recent trip to San Antonio, Texas inspired me to build a simple, colorful mini-barge so tourists can take water tours of the harbor area. As in other area of my town, the transportation system is an ongoing project. 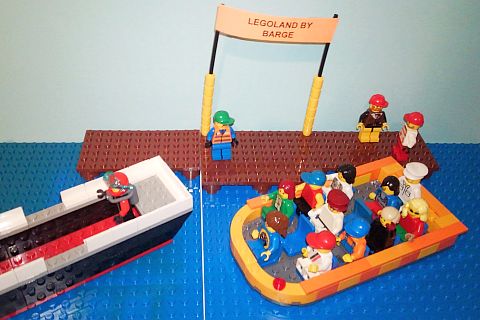 I hope you enjoyed this story. Next time, I will discuss my experiences with model railroading and the connection to LEGO trains and cities. Your comments, questions, and feedback are welcome. Thanks for reading!