As discussed in last week’s review (see here), LEGO FORMA is the result of a unique collaboration between LEGO and Indiegogo to test out a new product concept as well as a new marketing strategy (see: LEGO FORMA Set & Skin Packs Review). The main #81000 Koi Model is a kinetic sculpture that, when activated, simulates the movement of a fish. Backers of the project could also get additional skins (#81001 LEGO FORMA Shark Skin, #81002 LEGO FORMA Splash Koi Skin, #81003 LEGO FORMA Ink Koi Skin) to change out the look of the model. 🙂 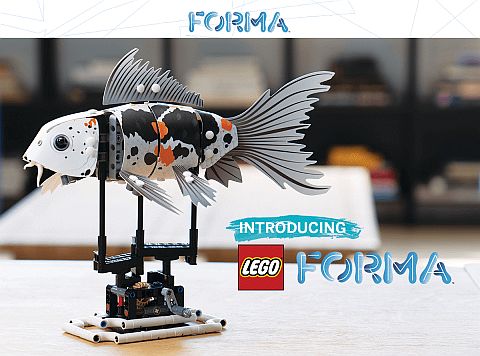 I was also a backer in this campaign, and having built the model a few days ago, I have to admit the spirit and purpose of LEGO FORMA feels like a dramatic departure from what I’m used to with LEGO sets. The closest to this model I’ve worked was Jason Allemann’s Sisyphus (see: LEGO Sisyphus Automata Hands-On Review). LEGO FORMA builds like a LEGO Technic creation, but attempts the slick appearance of a regular LEGO System set. In truth, there are very little LEGO System pieces in this model, which indicates that this is more like an alternative way to view LEGO Technic. Honestly, I do prefer learning to use LEGO Technic this way, since it does not short-change us on the beauty that is possible with LEGO elements. Gone is the herky-jerky utility of a construction vehicle so common in the LEGO Technic line. It is replaced by much more fluid movement and organic shapes. For a full review, please refer to LEGO FORMA Set & Skin Packs Review, and today, we will look at the interesting building techniques found in this unique model. 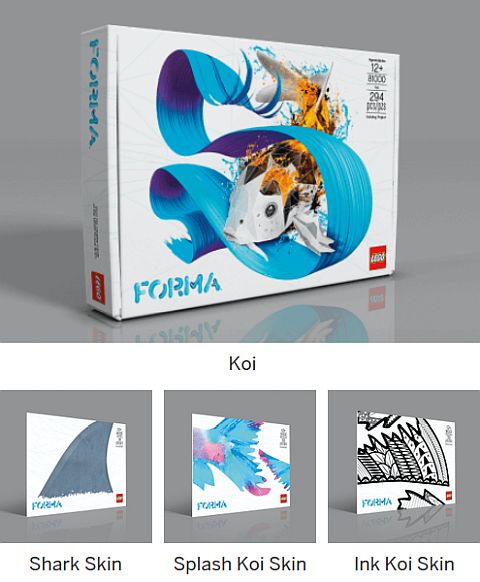 To design a kinetic sculpture with LEGO, it’s important to understand how it will move. Or at the very least, what are you trying to accomplish? The points of movement are where you will make some very important decisions, as these are the areas where hinges will need to be added. Part of this decision making process involve considering how strong the joint needs to be, whether or not you need to control one of the sides of the joint, and if any resistance is needed in the joint. The rule of thumb is to keep things as simple as possible. The more hinges you add to a creation, the more chances there are for something going wrong. 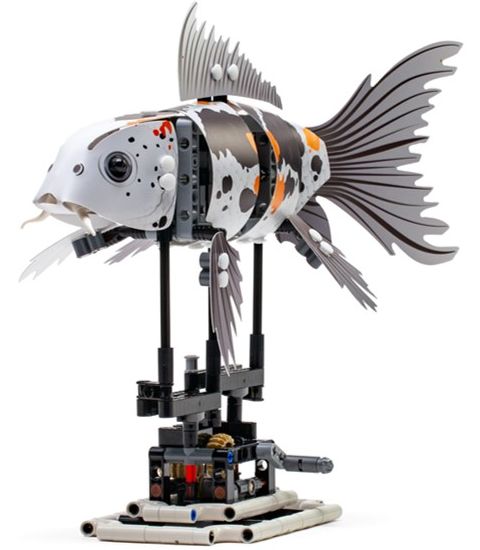 For the LEGO FORMA Koi, you have three major points of articulation. There are additional points that can move like the fins, but those are cosmetic elements only. Looking at the underlying frame of the fish, you can see the body is divided into four main sections. Between these sections are three hinges. The end sections (head and tail) of the fish are made to be fixed to the axles in order to control those sections more precisely. The remaining hinges are meant to be loose to respond to the changing position of the axles. 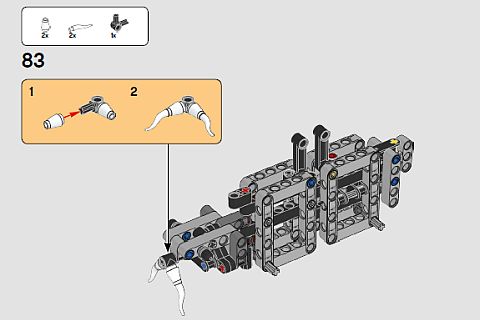 The actual hardest part of figuring out the points of articulation comes not from designing the joints, but from figuring out how do you support the weight of the model. In the case of the LEGO FORMA set, LEGO designers came up with an ultra-light design that could use the controlling axles as the rods that hold the model up.

Once you have all the joints figured out, there is another major feature of a kinetic sculpture you need to consider; how to control those joints. Joints come in two types; they will either be actively controlled or passively controlled. In the LEGO FORMA Koi model, the three major joints are all actively controlled, as they’re directly in contact with what moves them. The only passive point of articulation is in the top fin. One of those connection points has some give in order to absorb excess movement. 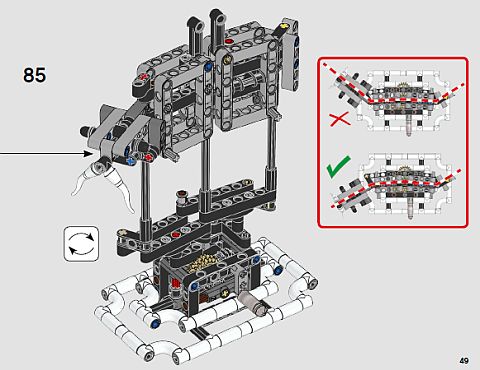 The Sisyphus model we mentioned above is a better example of passive points since the elbows, shoulders, hips, and knees were all passively controlled and just reacted to the other movement. The ultimate goal is to identify which joints will need to be actively controlled and which you can leave alone. The fewer points of control you have, the more likely you are to succeed at something that looks impressive and works well. Just like with the points of articulation, the more points of control you have, the more complex your creation becomes.

As for deciding where to put the points of control, you need to determine what the most specific movement you want to recreate is. The more specific a movement, the more likely you’ll need a point of control. For instance, it is important to have the timing of the movement match with each of the sections of the fish. This means not only do you need points of control in every section, but each of these points need to be tied together in some way to sync them up.

The goal of figuring out what points of control are needed is to give you some idea what you need to build towards. Is the movement circular? Does it need to move vertically or side-to-side? Do you only need a partial rotation? Is there a swaying or rocking motion involved? You can get as detailed as you wish. Whether or not you can achieve this motion will then determine if it is possible to build the rest of the model.

Most LEGO sets will use a crank to power what they supposed to do. Therefore, it is common in LEGO sets to change rotational movement into all sorts of other movement. Since using gears is pretty self-explanatory in how it can speed up and slow down rotation while changing directions, we’ll cover a bit more of an advanced motion in the LEGO FORMA set. 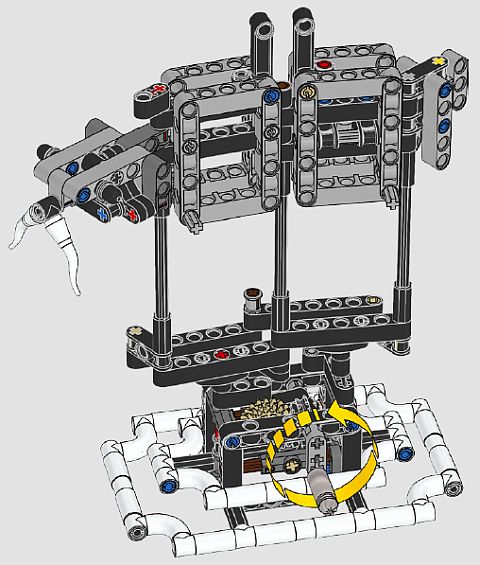 The hardest type of movement is defined movement. These are the times when you only make a partial turn or slightly move back and forth in a specific area. The key to this type of movement is to create a beam at the end of an axle. This beam acts a lot like a crank. The length of the beam will determine how much potential movement is possible. Short beams will give very little movement, while large beams can make wide and sweeping motions. At the other end of this beam, you’ll connect yet another beam. This will be the first beam that won’t necessarily need to move in a circular pattern. 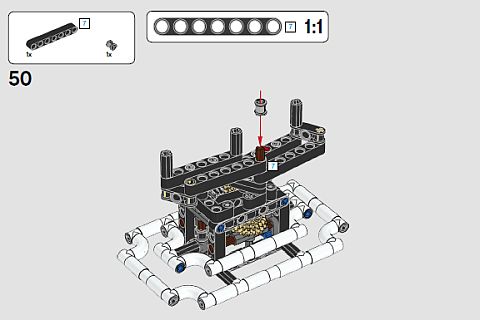 What happens from here is all about defining the movement. You will begin anchoring down this last beam with other connections. Each of these additional connections will still need to allow the beam to move, but they will also direct that movement. As more connections get added, you will create a whole new movement that is vastly different from the original crank.

This type of movement can even be what you need to build yet more distinctly defined movements. In the LEGO FORMA Koi model, we see all of this in action with the various lift-arms that control the axles and connect into the fish. Each piece is helping the other beams to either move in a certain way or connect with the rest of the movement. It is one of the most intimidating things to attempt to design, but it can be one of the most rewarding.

➡ APPLYING WHAT YOU LEARN:

Kinetic sculptures are some of the most impressive things to build out of LEGO. The sheer imagination that goes into them, much less the skill, is awe-inspiring. However, by not overwhelming yourself it is possible to build your own. It is my suggestion to start off simple. Perhaps you try a single moving element. Perhaps a waving hand for an animatronics sign. You have one point of articulation, one point of control. Now figure out how to make that happen by turning a crank.

Just remember to set goals for yourself. Figure out what needs to move, how can it be powered to look right, and then finally, how to make that movement possible. It may even be helpful to create skeletal structures to allow you to experiment. Because that’s where most of your time will be spent; experimenting. 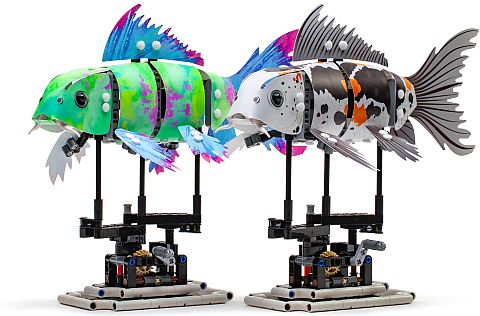 What do you think? How do you like the LEGO FORMA set? Do you have the set? Have you built it already? And what do you think of the building techniques we discussed here? Have you ever attempted to build your own kinetic sculpture out of LEGO? Feel free to share and discuss in the comment section below! 😉