I have always been interested in the large LEGO brick-built sculptures, so I was very excited when I got the opportunity to review the #75187 LEGO Star Wars BB-8 set. Even amongst LEGO sculptures, BB-8 is unique due to its spherical shape. LEGO sets shaped like balls are not very common, and studying the techniques is always a great learning opportunity. 🙂 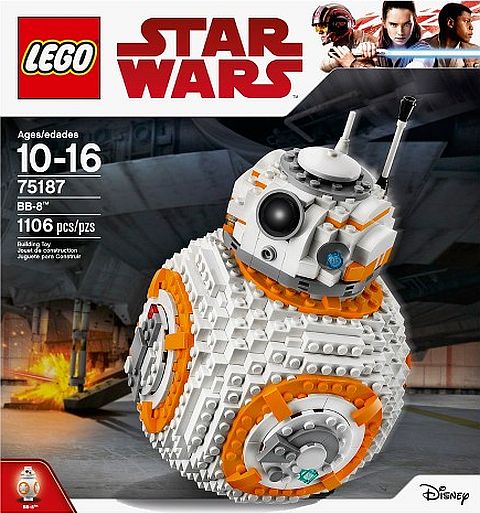 But before discussing the building techniques, I wanted to briefly mention my overall impression on the set. BB-8 is a solid build! The weigh of the model is satisfyingly dense, although holding it for too long is not too fun due to all the tiny little edges that make up the curves. The play-features are awesome and really capture BB-8’s character. I plan to donate the set to my local LEGO User Group, as we often do Star Wars related shows, and our name is SacBB (for Sacramento Brick Builders), I figured this set could be our mascot; a fun little SacBB-8. I almost regret parting with it, but more people need to experience this quirky little droid, so off he goes! And now let’s talk about the building techniques.

Having built the LEGO Star Wars BB-8 as well as a custom model that also included a sphere, I can say that there are some commonly used techniques that make sphere building fairly easy. First, you need to build a square box, with connection points on all six sides. With all the LEGO bricks with studs on their sides, as well as various brackets, this is not a terribly though feat. 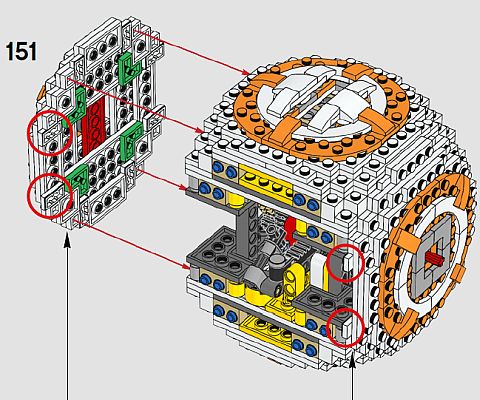 In the case of BB-8, the square box is made up of a top and bottom section, which are then joined together with four lift-arms. The top and bottom also have connection points for the remaining four sides. (When making the core of your own custom sphere, consider that you don’t necessarily need to incorporate the sides of the sphere, but it does help.)

Along with the interior box, you’ll need to make three sets of panels for the sphere. The top and bottom are one set. Left and right are the next set. And front and back are the last set. It is common for the panels to overlap each other. In doing so, some panels will naturally stick out farther than others to help with the blending process. As a side note, it can be helpful to color code the interior box so you know which side is which. For BB-8, LEGO designers used yellow for the front and blue for the back.

The next tip we can learn from BB-8 is that you should typically make the curves using a two-plate thickness. A 1×1 plate section is two and one half plates thick. Therefore, when viewing a sphere from the side, the two plate thickness easily deceives the eyes and makes you think it is a seamless transition from one panel to the next. Two-plate thickness also has the added benefit of being easy to interlock and make more stable when using two layers of plates. 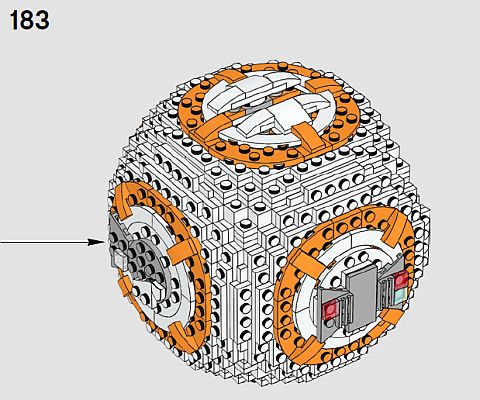 Finally, a good rule of thumb when making a sizable sphere is to have the longer panels hang out by two studs. Or in the case of larger spheres, use increments of two studs for the overhang. The reason why this is helpful is because two studs of overhang equal five plates of thickness. This ultimately makes it so that the lines on the bricks line up. Again, this tricks the eye in seeing a coherent shape rather than a layered appearance that looks off.

Other tricks you can use are adding jumper-plates to soften the curve of a really sharp angle, and use actual round pieces in the centers of the panels (it’s hard not to think sphere when you see something round). Also, use similar colors at the points where the panels meet. Anything and everything you can do to distract the eye will work in your favor.

I’m always delighted to discover new techniques to build mechanical parts. Thus, I was fascinated by BB-8’s extending arm. Not only does it go out and come back in when you twist a knob, but it also folds out and folds back in. 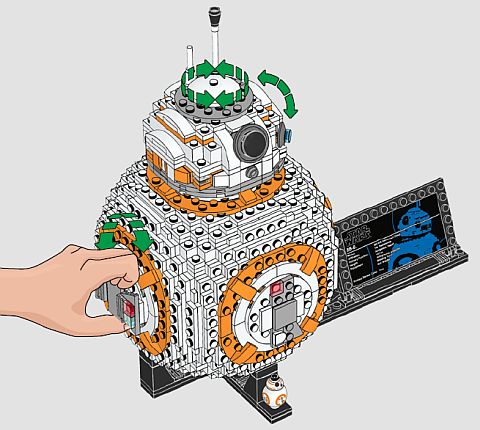 The first mechanism is simple. You use what is called a gear-rack. This takes the form of a straight piece with gear teeth on one side (in this set, it’s part of a lift-arm) to change rotating motion into linear motion. LEGO designers then added an expandable joint on one end, which is then connected to a regular lift-arm. Both of these are then placed into a framed network of other beams and held in place by the geometry of the parts. (A couple of smaller lift-arms are also added to prevent the bigger contraption from sliding out.) 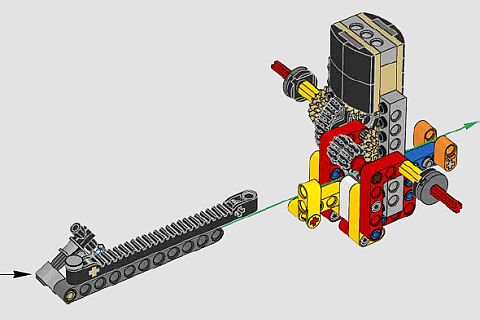 Ultimately what happens is that the lift-arm with the gear-rack moves first. It doesn’t immediately move the second lift-arm that is under it. Instead, it moves whatever it can using the expandable joint. This small, yet crucial movement is where all the magic happens. Whatever is attached to this expandable joint will look like it is unfolding. 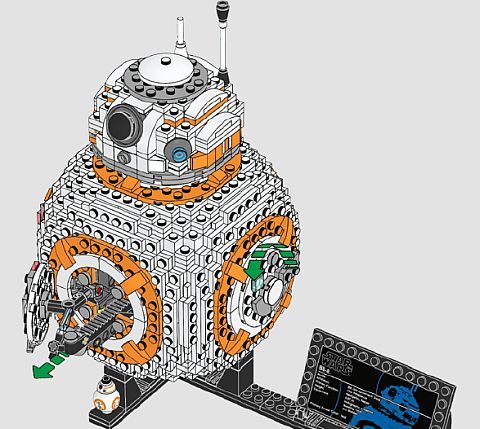 This is an interesting way to get a little more out of something that just extends or unfolds. The combination of the two techniques gives us a very complex looking movement without it being too difficult to replicate. In fact, the only reason this even looks remotely complicated is due to the fact that LEGO designers added in another gear to change the speed at which the arm unfolds.

➡ BUILDING A BOBBLING JOINT WITH LEGO

We’ll end with a technique I have never seen before. Activating the rotating head of BB-8 will also produce this almost comical bobble to the head. It quickly rights itself, but seeing it in action gives the droid so much personality. And how it is achieved is remarkably simple.

It starts by creating a rotational gear system that is mounted on a frame that can tilt. The frame is large enough that it will stop eventually. You turn the knob one way and the whole frame tilts in one direction, turn it the other way and the frame tilts in the opposite direction. Next, this frame is surrounded by a rubber band.

The rubber band sort of keeps the whole frame upright, which can make you wonder why LEGO designers even bothered letting the frame tilt in the first place. But then you add the head, and it turns out the extra weight now allows the frame to move once the head is in motion. The end result is the slightest bobbling bounce as the head spins and re-orientates to its upright position. This makes the model feel alive in a way you probably don’t expect. I think I even giggled when I first noticed it. Then I couldn’t put it down.

For many LEGO fans, building a LEGO sphere acts as some sort of milestone in their perceived expertise. I have to admit, it’s an experience where LEGO the toy really feels like LEGO the art project. It takes a level of spatial reasoning that can be intimidating for many. Thankfully, this set does a pretty good job at walking you through all the steps of making a really impressive sphere.

As an added bonus we also get some cool mechanical features. Expandable joints are still an area LEGO fans are exploring (think of the #21315 LEGO Ideas Pop-Up Book), and seeing them paired with other mechanisms, it is not surprising that the result is so stunning. This brings up the point that it might be worth your time to try to combine two mechanisms you are familiar with to see what type of action they can produce.

Finally, rubber bands are still a strange part to think of when building with LEGO, but LEGO designers themselves use them regularly. The thing is, rubber bands are readily available, and they don’t need to be official LEGO. Seeing them used for the bobbling action shows that they have the potential to make a self-correcting model. Normally, we have to rely on gravity to reset the position of a model, but this set shows that a rubber band can automatically straighten the position of a piece while still allowing movement. And we can also consider what other movements and mechanisms rubber bands allow us to do.

I put together a little video showing how the mechanisms of the set work (watch above). Although the #75187 LEGO Star Wars BB-8 set was first released in 2017, it is still available. So, if you want to give it a try, visit the LEGO Star Wars section of the Online LEGO Shop. 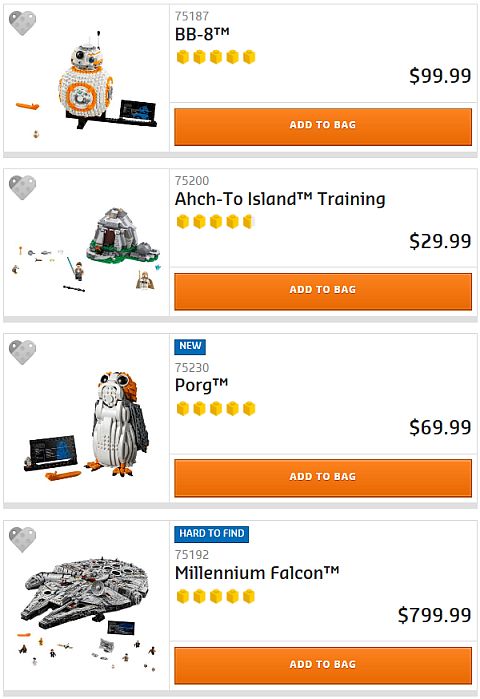 What do you think? Do you have the #75187 LEGO Star Wars BB-8 set? How do you like it? And what do you think of the techniques we discussed here? Are there any other interesting techniques you noticed in the set? Feel free to share your thoughts and own discoveries in the comment section below! 😉