Guide to feeling for The LEGO Movie 2 Minifigs

Finding The LEGO Movie 2 Collectible Minifigures has been tough, as the stores around me still carry some of the earlier series. In addition, this series is likely in higher demand due to the recent release of the film. Below, we will take a look at what is the best way to find the figures that you want to add to your collection. 🙂 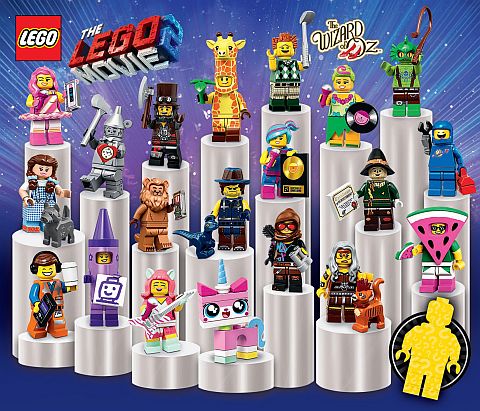 Before we begin, it’s worth pointing out that there are 20 different characters in The LEGO Movie 2 collection, with a very even distribution of three of each character in a full box (for a total of 60 minifigs per box). Thus, if you purchase a full, unopened box, you can get three complete collections! Another nice feature of this series is that it includes all four main characters from The Wizard of Oz!

➡ TLM2 – APOCALYPSE BENNY: Benny’s air tanks piece is the most distinct part in this bag, so that’s what I would look for first. Chances are you will also run across his toolbox, but it feels too close to Unikitty’s head, so verify by feeling for the other pieces.

➡ TLM2 – APOCALYPSEBURG ABE: The 4L bar is a fairly distinct piece that you can easily feel for. But you’ll need to watch out to make sure it’s not the Tin Man’s axe or President Business’s golf club. That’s why I like to verify by finding Abe’s hat. The hat has the hair attached so, it feels somewhat odd, but the shape of the stovepipe top hat is recognizable.

➡ TLM2 – AWESOME REMIX EMMET: To identify this minifigure, you will need to find his coffee cup. It feels a lot like a normal 1×1 round brick in general shape and size. The 1×2 tile is not unique enough to be certain.

➡ TLM2 – BATTLE-READY LUCY: This minifig is easy. Look for her quiver, and you’re done. The binoculars will work too, but the quiver is easier to grab and identify with your fingers.

➡ TLM2 – CANDY RAPPER: You’ll need to locate her ballerina skirt. It’s hard plastic and feels really flat. In fact, you might mistake it at first as a regular minifigure stand. However, the skirt is oval in shape, and does have some ruffles on the edge that can help distinguish it from the standard rectangular base.

➡ TLM2 – COWARDLY LION: When looking for this minifigure, I usually found his rubbery tail first. It’s not the greatest piece to feel for as it does flex and bend under your touch. Nevertheless, if you think you found the tail, you can verify by looking for the hairpiece. It’s big and lustrous like Chewbacca’s or Hagrid’s hairpiece. Just make sure it’s not a shoulder-length female style with a flip at the bottom as that would indicate Kitty Pop.

➡ TLM2 – CRAYON GIRL: When I was searching for this minifigure with others, all of us could easily identify the large crayon costume shape. My only word of caution is to make sure it’s not the Giraffe Guy. Crayon Girl comes with a 2×2 tile piece, whereas the Giraffe Guy does not.

➡ TLM2 – DOROTHY GALE & TOTO: Even after feeling through so many Collectible Minifig bags, it’s still odd to me to feel for a dog or a cat. I tend to initially think it’s an odd shaped torso. Unfortunately, with this minifig, you will need to start by finding her little dog. Then you need to make sure it’s not the cat lady. Do this by locating the hairpiece and see if it is rubbery. If it is, then you got Dorothy.

➡ TLM2 – FLASHBACK LUCY: All you need to do here is to look for the 2×3 tile that comes with her. It’s an easy piece to find, and it immediately identifies the minifig as Flashback Lucy. 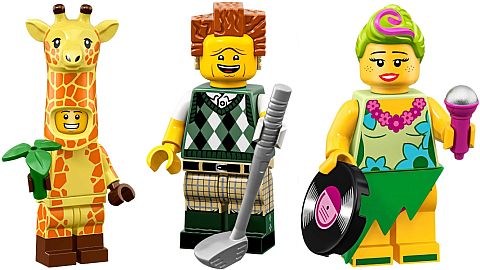 ➡ TLM2 – GIRAFFE GUY: The long neck costume piece is pretty easy to find. But if you are concerned it might be the Crayon Girl, then you can do one of two things. Find the leaves piece, which kind of feels like grappling hooks. Or, you can see if there is a 2×2 tile. If there is, you got Crayon Girl. If not, you got the Giraffe Guy.

➡ TLM2 – GONE GOLFIN’ PRESIDENT BUSINESS: It’s pretty much all about the golf club to find this guy. Once you identify a bar shaped piece, grab it, and work your way down to both ends. The gold club will have a strange protrusion at one end. It’s not flat, so it won’t get mistaken for an axe or a guitar very easily.

➡ TLM2 – HULA LULA: This minifig is another easy find. She comes with a 2×2 round tile. Once you have that, you’re done.

➡ TLM2 – KITTY POP: I recommend looking for her guitar. If you find a rubbery tail, you’re going to want to make sure it’s not the Cowardly Lion. The guitar is the best way to accomplish this. Although you might be familiar with her hair mould, as it is the same as the various cat ladies LEGO released thought the years (shoulder length with a flip at the bottom and two cat ears on top), there are too many large and bulky hairpieces in this collection to mix it up with.

➡ TLM2 – SCARECROW: The hat is like a pointed wizard’s cap, which is fairly easy to feel for. You can confirm it’s not the Tin Man’s pointed hat by finding a 2×2 flat tile. Also, the Scarecrow’s hat is a bit larger.

➡ TLM2 – SHERRY SCRATCHEN-POST & SCARFIELD: Find the cat like you found the dog for Dorothy, then identify the hairpiece. Sherry’s hair is hard plastic and full bodied, so it stands out fairly well. You just want to make sure it’s not Dorothy’s rubbery hair. 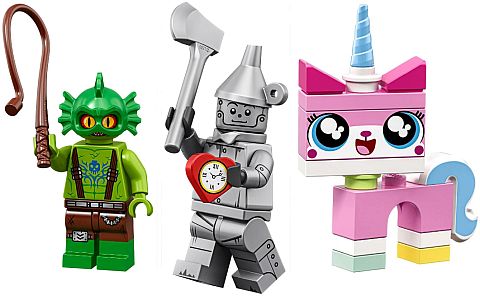 ➡ TLM2 – THE SWAMP CREATURE: The whip in this bag is easy enough to locate. It’s not the curly whip we find in some sets, but the one that looks like an elongated “U”, used for the Ghostbusters proton pack. It’s a soft plastic piece that is quite distinct.

➡ TLM2 – TIN MAN: For this minifigure, I’d recommend locating his bowtie. He may have more than one, as LEGO included an extra piece in some of the bags. They feel like little rings, and there are no similar pieces in the series.

➡ TLM2 – UNIKITTY: Unikitty feels more like a polybag than a Collectible Minifigure. So, if you find small plates that are square and round as well as small slopes, chances are you got a Unikitty that’s ready to play. 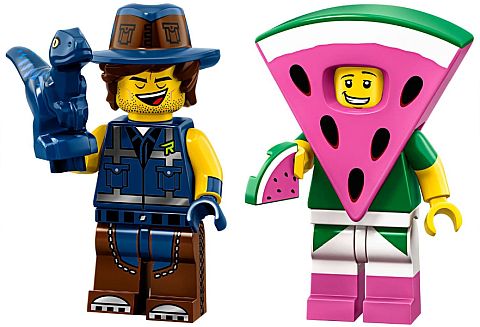 ➡ TLM2 – VEST FRIEND REX: When I first felt the little dino, it threw me for a loop. I thought it was some oddly shaped ray-gun. So, I ended up going for Rex’s hat. It’s a lot like a cowboy hat, but with a hairpiece attached. Although you could always try going for what feels like a ray-gun and hope for the “vest”.

➡ TLM2 – WATERMELON DUDE: The giant watermelon slice is a hard piece to miss. It’s sort of like a pizza slice; rounded on the curved end and comes to a point at the other side. It’s so big, that you may think that you accidentally picked up some other bagged toy and not a Collectible Minifigure.

And that’s all there is to it to find all twenty of The LEGO Movie 2 Collectible Minifigures! As usual, it’s best to shake the bags a bit before start feeling through them, to make sure that all the little and easily identifiable pieces fall into a corner. It also helps to have a picture of the minifigs in front of you, so you can visualize the parts you are feeling for. The LEGO Movie 2 Collectible Minifigs should be available from various retailers, although, as I said, it has been a bit difficult to find them. You can also order them from the Online LEGO Shop, however please note that you may not get all the minifigs you want, or you may end up with duplicates of some of them. 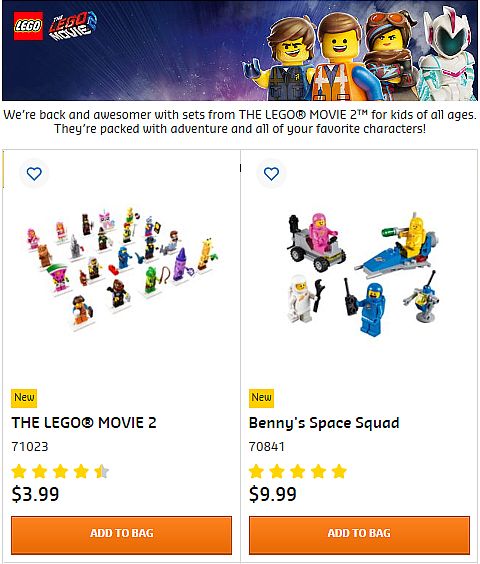 What do you think? Do you have any of The LEGO Movie 2 Collectible Minifigures yet? Are you planning to collect them all? Which one is your favorite? Feel free to share and discuss in the comment section below! 😉