Earlier this year, I visited the medieval fair that goes through our town once a year. The event is set up like a medieval village and marketplace, with all the vendors, performers, and even the visitors dressed up in medieval garb. This allows you to fully immerse yourself in the atmosphere of medieval times. One of the vendors I really liked built handmade puzzles from wood. Some of the boxes were simple with only one or two hidden components to open it, while others were quite complex and required several steps of turning, pulling out, and removing various levers. The most complicated puzzles also included fake solutions to lead you to dead ends. 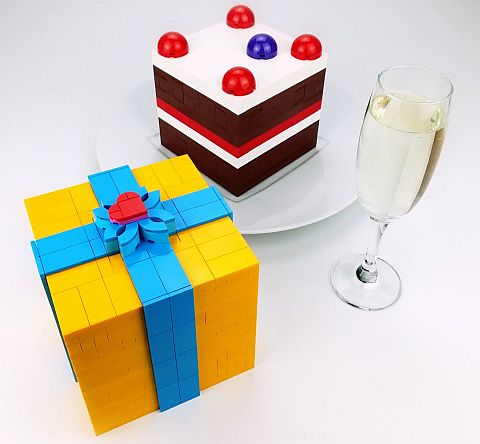 Puzzle boxes are a fun way to make gift giving more engaging (the receiver has to solve the puzzle to be able to get remove the gift), or it could simply be used as a puzzle game. You could even use puzzle boxes to hide your most precious treasures. And building puzzle boxes is a great hobby in itself. So why are we talking about puzzle boxes? Well, because they are also a natural fit for LEGO fans! Building puzzles from LEGO bricks means you don’t have to do any woodcarving, and can fully focus on assembling clever mechanisms. 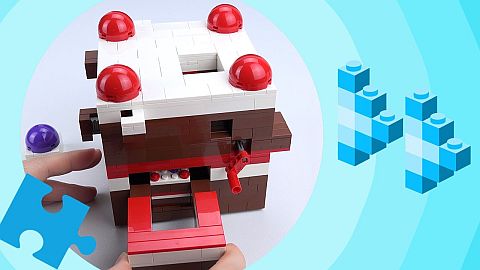 Today, I will show you a couple of puzzle boxes built by Norwegian LEGO fan legolamaniac. The simpler puzzle resembles a slice of decorated cake (with a smaller cake hidden inside as the coveted prize, while the more complex puzzle looks like a gift box with hidden gems. Watch the videos below to see how the boxes work.

As you can see, it takes many steps to open these boxes, using several different lifting, sliding, pushing, turning and other mechanisms. Legolamaniac shares that the shortest amount of time someone solved the gift box puzzle was 45 minutes, and this was a person who already solved the cake box puzzle. It’s not uncommon to spend a couple of hours or more to solve a puzzle like this. 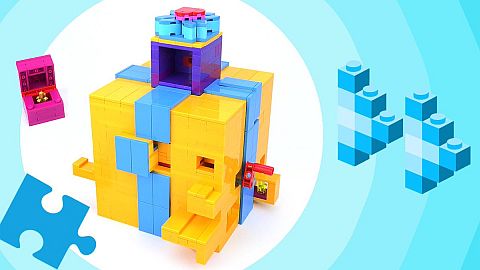 To build such puzzles, legolamaniac starts by figuring out the final reveal of the puzzle and working backward from there, adding various levers and mechanisms. He comments that thinking about how to start the puzzle also helps, as it gives him two finite points to connect. Legolamaniac uses real LEGO bricks to make a crude but working prototype. 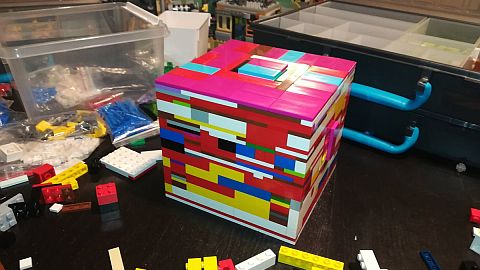 Once the brick-built prototype is in somewhat working order, he transfers the project to Stud.io, BrickLink’s free virtual building program. Stud.io is used to improve the design, work out the details, and finalize the color-scheme. This can be a time-consuming process, as some LEGO pieces are not available or rare in certain colors. So, the puzzles may have to be adjusted to accommodate the available colors and shapes. Stud-io is fully integrated into the BrickLink marketplace, so purchasing the necessary pieces is relatively easy. However, it may take some time for the pieces to arrive, especially if several sellers from different countries are involved. Once the pieces arrive, it’s time to build the puzzles for real! At this stage, some further adjustments may need to be made, as building with real LEGO pieces is always different than building virtually. When the puzzles are finished legolamaniac tests them on his coworkers to make sure the puzzles are solidly built and the difficulty is just right. (Puzzle box progress picture below with legolamaniac’s trusty helper). 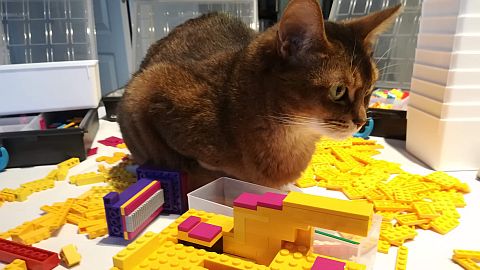 If you would like to build your own LEGO puzzles, you can find many great tutorials on YouTube. Legolamaniac’s puzzles are some of the most complex ones I have seen, so it’s probably best to start with something a bit easier until you get the hang of it. Most LEGO box puzzles use simple LEGO elements that you probably have already. Don’t worry about using perfect colors or shapes. Just work with what you have to get the mechanism down. If you really get into puzzle building, you can always get the right colors and pieces later. There are also LEGO box puzzles which use mostly LEGO Technic elements, which are more for the mechanically inclined. Try out a few different ideas until you find the style that you like. 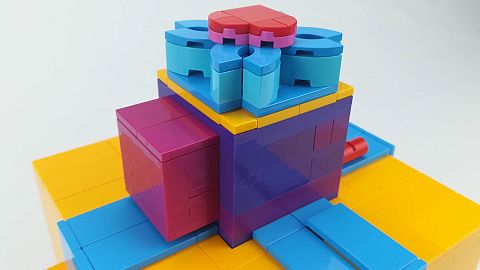 It’s also worth noting that puzzles can be incorporated into larger LEGO dioramas. Consider using puzzle mechanisms to add secret passages and traps to castles, or for the complex locking mechanism of space stations. Once you start playing with puzzles, you will find lots of opportunities to use them.

What do you think? Have you ever played with box puzzles? And did you ever build any, either from wood, LEGO or other materials? Feel free to share and discuss in the comment section below!