The Ninjago: Masters of Spinjitzu animated television series premiered back in January 2011, and it is currently the oldest show still airing on Cartoon Network. Each season of the TV show comes with accompanying LEGO sets, which allow kids to play out and expand on the adventures a group of young ninja and their battles against evil forces. The Ninjago saga has been capturing the imagination of kids around the world for over eight years and it has a tremendous fan base. Children could identify with the characters and their struggles while being immersed in an awesome fantasy world populated by ninjas, dragons, pirates, cyborgs, and more. Young Ninjago fans who have been following the story from the beginning are now in their mid to late teens, yet their passion for Ninjago is still strong. 🙂

Last fall, there was a public call for Ninjago fans to share their story. The result of this collaboration is a series of video-interviews, which are now published on LEGO’s YouTube channel as the Meet Ninjago Super Fans series. In the first video, we meet Omar, a Ninjago fan with a true ninja’s passion for dragons, details, and design. He has even memorized the Ninjago alphabet! Since Omar was 10 years old, his grandmother has fueled and shared his love of LEGO Ninjago sets, and they still build together.

In the second video, another Ninjago fan, Molly, talks about how she became an instant fan of the TV show since the first time she watched it with her brother. The two of them still play together and have a large collection of Ninjago dragons, minifigs, and more. In the third video, we get introduced to friends Matthew and Jonathan, who train together in Taekwondo, and expand their ninja training by watching the Ninjago TV show and building Ninjago sets. You can watch all three interviews in the player below, and if more videos are added to the series, I will include those as well.

Really nice interviews, aren’t they? Teens often become self-conscious and unsure about being involved in the LEGO hobby due to peer pressure and changing interests, but it seems like the story of Ninjago captured the hearts and minds of young LEGO fans so deeply, that they continue even thought their teenage years. 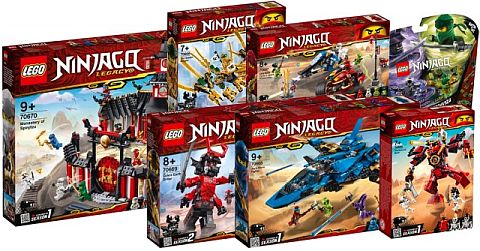 Ninjago’s popularity took the show well beyond its planned lifespan, and it even got a feature film! The Ninjago story and the accompanying LEGO Ninjago sets evolved through the years with new suits, weapons, vehicles, and dwellings for the ninja, and new opponents to fight. LEGO recently released the LEGO Ninjago Legacy Collection with upgraded versions of some of the earliest LEGO Ninjago sets, and we also got amazingly detailed large sets like the #70618 LEGO Ninjago Destiny’s Bounty, the #70620 LEGO Ninjago City, and the #70657 LEGO Ninjago City Docks. In summary, being a LEGO Ninjago fan has been awesome, and continues to be awesome! If you would like to check out the current selection, they are available at the LEGO Ninjago section of the Online LEGO Shop.

What do you think? Are you a Ninjago fan? How did you get introduced to the story and the LEGO sets? What is your story? Feel free to share and discuss in the comment section below! Who knows, you might be in the next episode of the Meet Ninjago Super Fans series! 😉