Just a quick reminder that the LEGO City Space exploration sets are now available. This is a fantastic selection of LEGO City sets, inspired by real space exploration, including vehicles, spacecrafts, research station, and more. Below is an overview of the sets in the new collection, and I have also included video-review by JANGBRiCKS, so you can see the sets in detail.

➡ #40345 LEGO CITY MARS EXPLORATION MINIFIG PACK: This small set includes two astronauts, two space technicians, a brick-built portable lab, and a bunch of accessories (including two of those fantastic new geodes in trans-green). This is a good starter pack for space exploration, or could be used as an add-on pack for the larger sets. 44 pieces. Price: $12.99 – BUY HERE

➡ #60224 LEGO CITY SATELLITE SERVICE MISSION: This set features a NASA-inspired shuttle with opening cockpit, raising flaps on the wings, and space in the back for a satellite with opening solar panels. There is also an astronaut minifigure with what LEGO calls in the set description “Extra Vehicular Activity Suit”. A very important and noteworthy feature of all of the new LEGO City Space sets is that they are modular, and can be connected in many different ways. For example, this small shuttle can connect to some of the larger crafts in the other sets via LEGO Technic pins. Check the video-reviews below to see what I mean. Shuttle with flaps lowered measures over 1” (4cm) high, 5” (13cm) long and 6” (17cm) wide. 84 pieces. Price: $9.99 – BUY HERE 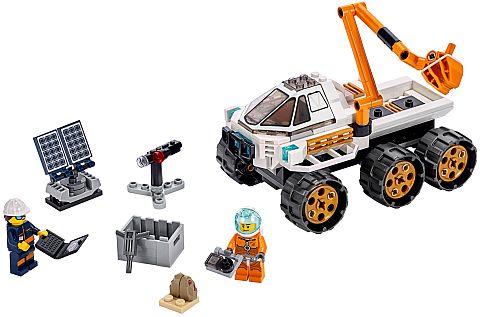 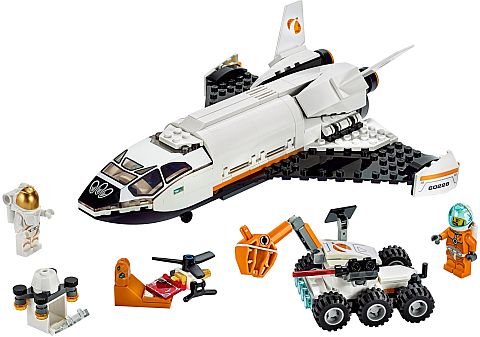 ➡ #60226 LEGO CITY MARS RESEARCH SHUTTLE: Now we are looking at one of the bigger sets! It features a space research shuttle with opening cockpit, two large opening doors and space inside for the storage drone, plus a NASA-inspired Mars rover with articulated grappling arm, laser and tilting solar panels, storage drone with opening compartment, plus a helidrone with spinning rotor blade and scanner to read a secret symbol discovered on Mars. There are also two astronaut minifigs in different types of spacesuits. Lots of play value here, especially if you add the previously mentioned minifig pack to boost crew numbers. Research shuttle measures over 3” (9cm) high, 9” (23cm) long and 8” (21cm) wide. Mars rover measures over 1” (5cm) high, 2” (7cm) long and 2” (6cm) wide. 273 pieces. Price: $39.99 – BUY HERE 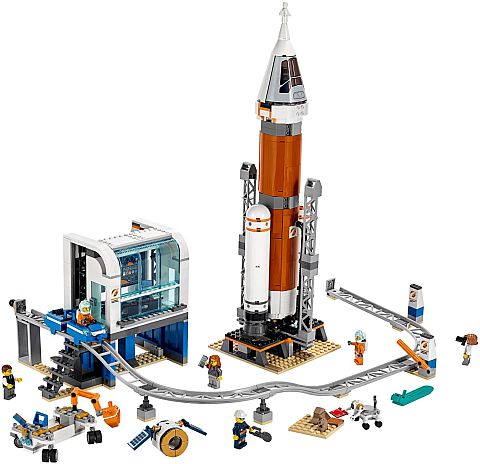 ➡ #60228 LEGO CITY DEEP SPACE ROCKET & LAUNCH CONTROL: This is another fantastic set in the collection with so much to see and play with! It includes a modular, multi-stage NASA-inspired rocket that can be customized in different ways with the booster, payload storage and cockpit modules, space telescope with folding solar panels and magnifying glass (this is so simple but cool!). The rocket launches from the launchpad with opening tower arms, and there is also a rover with articulated grappling arm, and a separate research area with geode retrieval training. The launch control tower features a detachable window section for easy access, foldout function for different layouts, and a super cool countdown function and animated function behind the displays (make sure you watch the video on this!). In addition to the already built in functions, you can also slide in your mobile phone as a screen for interactive play opportunities with the LEGO City Explorers app (which is also demonstrated in the video below). But that’s not all! There is also a track system with two stops and two cars that wraps around the whole compound. The included minifigs are two astronauts, two scientists, a launch director, and a ground crew technician, plus a robot. I can’t emphasize enough how cool this set is. Watch the video-review and be amazed! Rocket standing measures over 16” (42cm) high, 4” (11cm) wide and 2” (6cm) deep. Launch Control closed measures over 7” (18cm) high, 5” (13cm) wide and 5” (13cm) deep. Launchpad with closed tower arms measures over 9” (24cm) high, 4” (12cm) wide and 4” (12cm) deep. Monorail track measures over 3” (8cm) high,14” (36 cm) deep and 18” (47cm) wide. 837 pieces. Price: $99.99 – BUY HERE

➡ #60230 LEGO CITY SPACE RESEARCH PEOPLE PACK: If you want to boost the number of LEGO City Space minifigures in some of the other sets, here you can get a bunch of characters in different jobs relating to space travel and exploration. This set also features a spinning G-force astronaut training machine with two seats, treadmill, rocky ground scene, drone with spinning rotor, plant growing pod, robot stand, computer stand, a test rocket with stand, and a robot. The fourteen minifigs include seven astronauts, a reporter, a camera operator, personal trainer, a drone engineer, a rocket engineer, a mechanical engineer, and a botanist. There are also a large number of minifig accessories; some useful like the printed pieces and geodes, and some funny like the alien head on a stick. 209 pieces. Price: $39.99 – BUY HERE

All in all, this is probably the best LEGO Space collection we have gotten for a long time. The color-scheme is pleasing and cohesive, the minifigures are nicely detailed, and the modularity of the entire collection is excellent. There are a few negatives too, like that the white printing on the cockpit pieces doesn’t match the white of the rest of the elements, and that the interchangeable modules are sometimes not as modular as they could have been. But all in all this is an excellent collection that down the road could invoke the same nostalgia in today’s kids that the LEGO Classic Space sets did for the generation of kids growing up in the ’70s.

If you are interested to check them out, all the new LEGO City Space sets are available at the LEGO City section of the Online LEGO Shop. 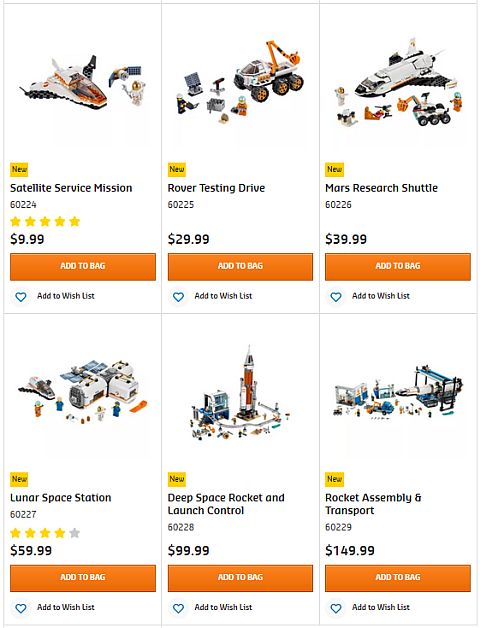 Speaking about today’s kids, also note that several of the sets come with Instruction Plus instructions available in the LEGO Life app for smartphones and tablets (we talked about this a couple of days ago). The easy-to-use, intuitive digital building instructions let you zoom, rotate, and visualize the models as you build them. Instructions Plus is primarily meant for guiding younger builders through the building process, but it can be enjoyed by older LEGO fans as well. All you need is a smartphone and the free LEGO Life app to access Instructions Plus. 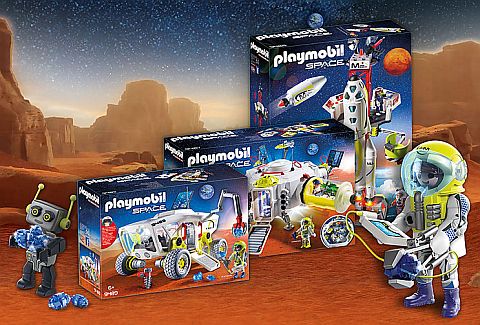 It’s also interesting that Playmobil just recently came out with a whole collection of space exploration sets in their own City line. It includes a large space station, rocket, launch site, space shuttle, research vehicle, rover, and several accessory sets. Although Playmobil is not a construction toy, their themes are very similar to LEGO themes, and the sets are usually modular to allow different configurations. In case of the space exploration sets, they come with removable and interchangeable modules and pods, and in some ways, I like them even better than LEGO’s own arrangements. Anyway, I know that many LEGO fans are also fond of Playmobil, so I thought to mention their new line. I’m including a couple of video-reviews below, so you can see what the Playmobil sets look like.

What do you think? How do you like the new LEGO City Space sets? Are you planning to get any of them? Or perhaps even collect the entire selection? Which one is your favorite set? Feel free to share and discuss in the comment section below!