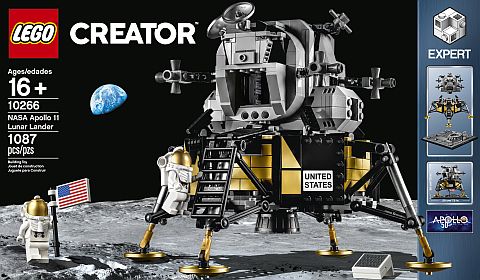 In fact, according to this excellent interview with Jamie Berard, Design Manager for the LEGO Creator Expert team, it was the overwhelming success of the #21309 LEGO Ideas NASA Apollo Saturn V that prompted LEGO to consider releasing other LEGO space sets. The #10266 LEGO Creator Expert NASA Apollo 11 Lunar Lander is also proceeded by a couple of other Lunar Lander based sets. Back in 2003, LEGO released the LEGO Discovery line with models of various space exploration vehicles. This included the #10029 LEGO Lunar Lander, and a smaller Lunar Lander in the #7468 LEGO Saturn V Moon Mission (see both sets below). It’s worth studying the earlier sets and comparing them to the new one to see how building techniques changed. 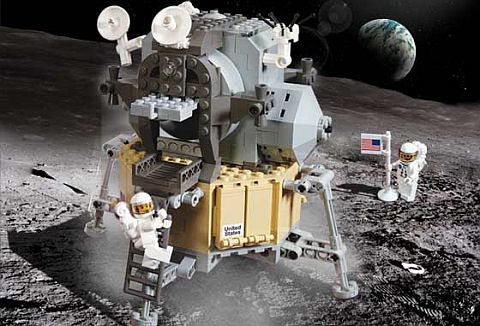 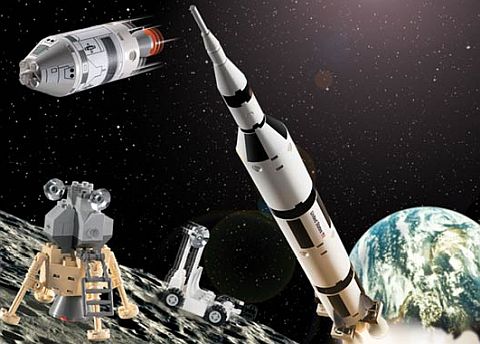 Going back to the LEGO NASA Apollo 11 Lunar Lander, it comes in a decent size box that features the Lunar Lander on the front, and some of the play-features at the back. One of the most attractive features of this set is the instruction booklet. It includes twelve pages of great information and original images of the Moon landing, key moments of the mission, the people behind it, and more. There is also information on the design process of the LEGO version of the Apollo Lunar Lander, including a comparison image with the original blueprint. In addition, throughought the building instruction pages there are more little tidbits on the Lunar Lander. Instruction booklets like this are highly educational for adults and children alike. 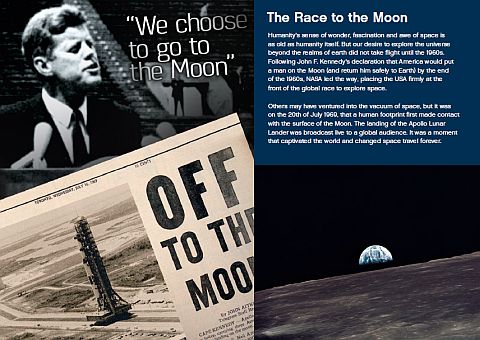 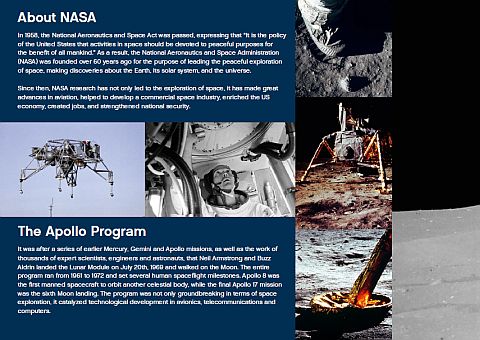 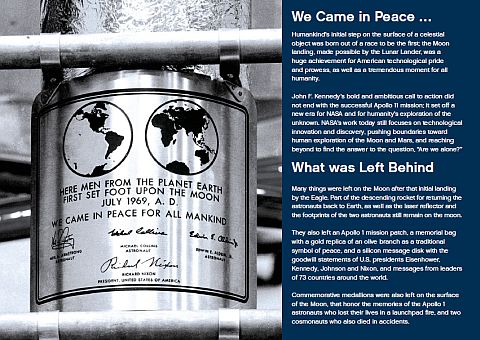 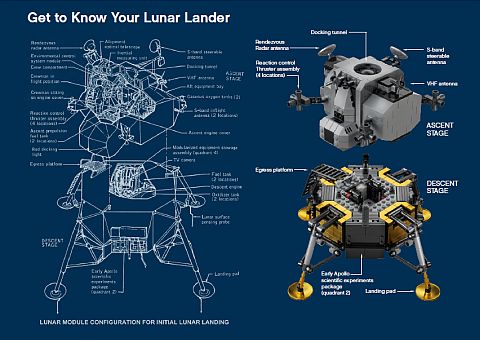 The LEGO Creator Expert NASA Apollo 11 Lunar Lander comes with four sets of numbered bags. Bags #1 include parts for building the base, bags #2 and #3 include parts for building the descending stage, and bags #4 include parts for the ascending stage. There are some repetitive sections in the set, but the building process doesn’t get boring. The assembly of the legs with those nicely engineered triangle shapes is a particularly satisfying experience. I also like that the ascending stage is built in a simple manner, referencing the simple and efficient design of the Lunar Lander, as well as the simpler design of early LEGO sets. 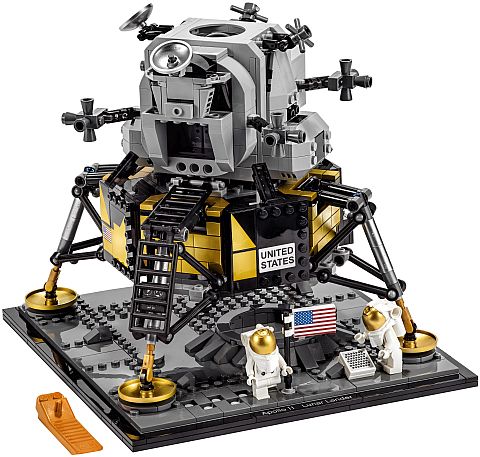 The part-selection is fairly basic, with mostly shades of gray and black elements, but there are also some highlights. Most notably sixteen 1×1 tiles, thirty-six 1×2 tiles, eight corner tiles, eight 1×1 cheese-slopes, and four 4×4 dish elements – all in metallic gold. The included sticker-sheet with metallic backing provides most of the decorations for the set, like the American Flag, the United States logo, and the control panel pieces. However, there is one special printed piece; the Apollo 11 Lunar Lander printed tile that decorates the base. 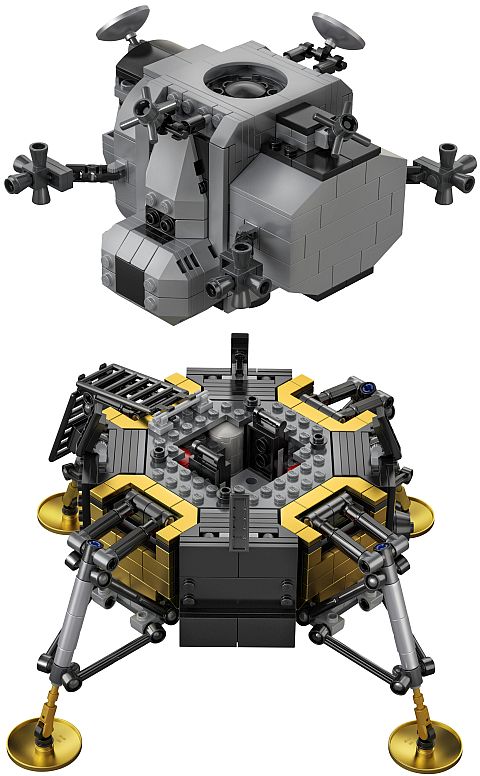 The #10266 LEGO NASA Apollo 11 Lunar Lander is mostly an educational and display set, but it also has quite a few play-features. The ascending and descending stages can be separated to play out the real Moon landing, the ladder can be folded out for the astronauts the climb down and plant the flag (the little footsteps are a lovely detail), and the minifigs can be positioned both inside and outside the model to do their work. 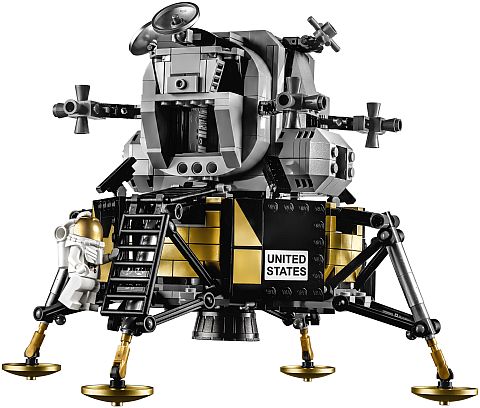 The only real disappointment I have with this set is the design of the minifigs. The entire set is a celebration of the actual Moon Landing, but the two minifigs are just general LEGO City guys with no resemblance to the actual astronauts. In addition, they come with minimal amount of printing on their spacesuits (which is that covered up by their large helmet/life-support system. No printing on the arms and legs at all!

In summary, I would say that the #10266 LEGO Creator Expert NASA Apollo 11 Lunar Lander is a solid space-themed set. I can’t say with confidence that it will reach the popularity of the #21309 LEGO Ideas NASA Apollo Saturn V, but I think it is a strong contender. The accurate design, the play-features, the displayability, and the excellent instruction booklet are all strong points. The only negative features I can point out are the inaccurate and unusually plain minifigures, and using stickers for most of the decorations. Below, I’m including JANGBRiCKS’s review, who will show you the set in more detail. I have also included JANG’s speed-build video, in case you want to see the building steps. And to watch the designer-video with LEGO set designer Lars Joe, go here: LEGO Creator NASA Apollo Lunar Lander (press-release)

I should also point out Jamie Berard mentioned in the above-linked interview that if the #10266 LEGO Creator Expert NASA Apollo 11 Lunar Lander does well, there is a possibility of getting a whole LEGO Creator Expert space line. Imagine that! Also, remember that the end of the month we are going to get a whole LEGO City Space Exploration collection! So, LEGO Space seems to be well and alive! 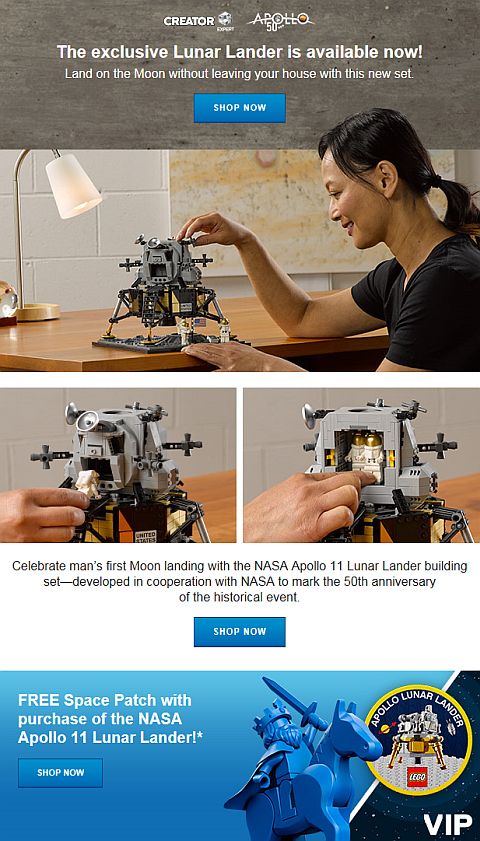 Here is the official description of the LEGO Lunar Lander: Celebrate man’s first moon landing with the #10266 LEGO Creator Expert NASA Apollo 11 Lunar Lander building set. Developed in cooperation with NASA, it marks the 50th anniversary of a historical event that captivated the world. This collectible model features a highly detailed replica of Apollo 11’s Eagle lunar module, plus a depiction of the lunar surface, complete with crater, footprints, and a U.S. flag. The descent stage comes with gold colored landing pads and panels, opening camera and laser hatches, and a ladder, while the ascent stage has a detailed interior with room for two astronauts. Finished with an Apollo 11 Lunar Lander nameplate, this display model makes a great centerpiece for the home or office and provides a challenging and rewarding building experience full of nostalgia. Includes two astronaut minifigures with NASA decoration and golden helmets. Measures over 7” (20 cm) high, 8” (22cm) wide and 7” (20cm) deep. Includes 2 astronaut minifigures with NASA decoration and golden helmets. 1,087 pieces. Price: $99.99 – BUY HERE 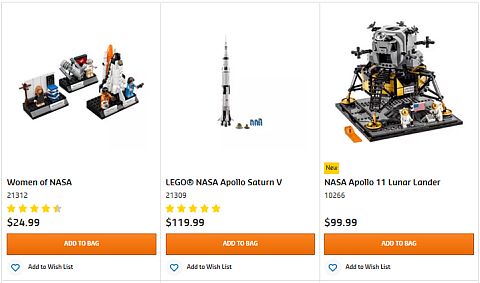 What do you think? How do you like the LEGO Creator Expert Apollo 11 Lunar Lander? Is this a set you are planning to get? And do you have any of the other NASA and space exploration inspired LEGO sets? Which one is your favorite? Feel free to share in the comment section below!