Train shows tend to be a fall/winter event. Someone commented to me recently that the type of people who go to train shows are into NASCAR come spring. Many are certainly enjoying the outdoors at some point. A recent (March, 2019) visit to the Greenberg Train Show at the New Jersey Expo Center in Edison, New Jersey is a good example of what my experience with these shows is like, so I will talk about that today. 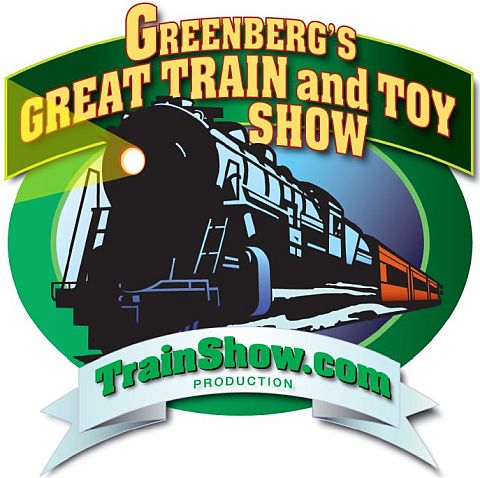 First, it cost me $18-$20 in tolls and another $8 for admission to the show. So if I was going just for business (to buy and resell LEGO), it wouldn’t make sense. Instead, I was going to have a good time, learn some things, and maybe buy a little LEGO for my personal collection. There are many such shows around the country. I recommend the activity, especially for LEGO townies.

I arrived at the New Jersey show about 11 AM. There was a travel exhibit and a bead show at the same show venue that weekend, so I had to park in a very distant lot and walk. I decided to start from the back of the exhibit hall because my show-favorite LEGO vendor is usually there.

This was Sunday, the second day of the show, so lots of bargains might have been gone by then. My LEGO vendor friend was with his wife in his usual spot, selling minifigures (his main business), Beanie Baby toys, and sports figures. He had several freezer bags of assorted LEGO. Some were $5 and some $7. I bought three $5 bags and one $7 bag. As always, I was looking for plain bricks and town related pieces. I also picked up several 10×10 and 5×10 baseplates. The smaller ones typically come as parts of older sets. Total bill: $33. My filled shopping bag with the assorted pieces and baseplates turned out to be quite heavy. The vendor’s wife volunteered to hold it under their table while I roamed the rest of the show. She’s done this for me in the past, so I took her up on the offer. 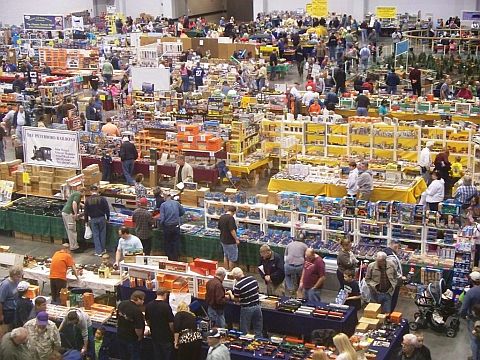 Later at home, I realized that I lucked out. One bag included many/most of the pieces for a LEGO police command truck trailer, but without the cab. Other pieces built some of the city bank including one of the signs. (That’s the easy way of figuring out what set it was.) In the following week, I was able to build the back of the trailer as well as the cab from scratch. (I still can’t get the cab and truck to line up for towing; wrong wheels or underpinnings, I guess.) A second bag had an almost complete ambulance and bases for 3-4 so far undeterminable vehicles. The third bag was mainly standard bricks and plates, about half of them green. The fourth was assorted random pieces.

Going back to discussing the show, I saw some interesting displays and sales of toys and trains. In a previous show, I had bought several open/used Hess Fire Trucks. (Another potential hobby!) There was at least one table selling boxed Barbie Dolls, and several vendors had Matchbox cars in different price ranges. One seller had – among many others things – a box full of LEGO pieces at a nickel apiece. They turned out to be mainly knockoffs, but I picked out anything LEGO branded that I wanted. A train dealer had packs of O-scale cows on sale for $8. In the past, I’ve purchased used ones at $1 apiece. I would have bought more, but my pastureland is already packed. I’d need space for one or two additional green baseplates for them to fit, but there’s no room for them.

A guy along the main aisle had an entire carton of closed McDonalds Happy Meals give-away toys on the floor. I picked through it and found some LEGO ones. They were a dollar apiece. There was also a Giddy the Gator DUPLO set. And I purchased three of a 14-piece LEGO bag from 1988 that builds a small pink and white airplane. I guess they will go in my saved unopened sets carton.

At a different table, a young man had some minifigure packs at $5 apiece and some polybags at $10 apiece. I passed on those. Someone else had a huge display of knockoff minifigures. Honestly, some of them would have been tempting at $1 apiece. At prices going up from $4, I passed. Someone else had a little plastic bag with free traffic signs. That’s a price I like. Another fellow had closed polybags in a narrow carton on the floor. I’ve seen him at other shows. He’s waiting for someone to pay his price. I’m sure he’ll get it one day, just not from me. 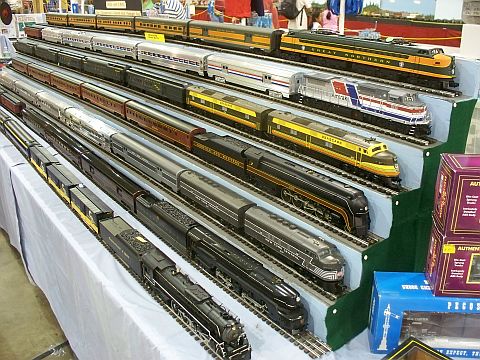 A regular vendor in one corner of the room sold new metal trucks, mostly too large for LEGO scale. At the opposite corner, a vendor sold plastic used trucks, buildings, animals, and train signs. I kept eyeing a small plastic army landing craft that matched one that I had as a kid. But $14 seemed steep. Near the door, a table offered new books from Kalmbach Media – all the how-tos to build layouts in whatever scale you choose. I was interested, but they all had too much about “how to build” and not enough of “what to build” to make it worthwhile for a LEGO fan. Someone sold coffee-table railroad books. A different vendor had old train magazines at $2 apiece. A few years ago, I was buying them at four for a dollar. At the next booth, someone sold framed photos of real trains. (Maybe LEGO should be offering posters like that.) Someone else was selling Thomas the Engine track. (Competition for LEGO? For DUPLO? At least for space.) The seller tried to convince me that used is as good as new.

The Garden State LEGO User Group had a large display on the far right side of the hall. Some new stuff, but some repeats from previous shows. Quite honestly, the non-LEGO City/non-LEGO Town/non-LEGO Friends sections held little interest for me – except to admire great LEGO creativity. The LEGO Town stuff had me pull out my cell phone to take pictures and ask one of the members how something was built. Furthermore, I’m jealous of the talent, the bucks, and the space. I keep needing to remind myself that this is a club setup, not an individual one. 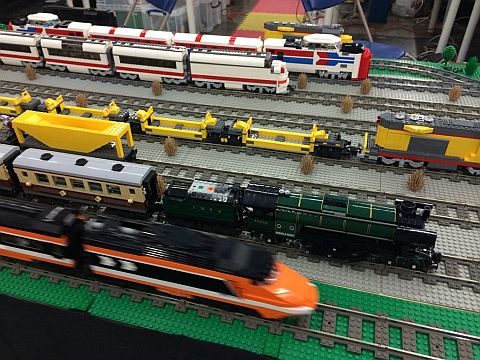 The LEGO City section was surrounded by train tracks with added brown ties and grey ballast. There was a freight train running on a continuous loop. One corner had a nice gas/service station. A donut shop with a big red coffee cup and saucer for the sign was very creative, as was the neighboring pizzeria. The grid roof over the rooftop seating area was a novel idea. Blue Bakery, obviously built with blue bricks, fits nicely with the LEGO Creator Expert city series. The construction site, with a house being built, was something I’ve seen from different builders on the internet. I think it adds a sense of ‘action’ to any town layout. One of these days, I want to buy 1×8 tan plates and build a version for my layout. 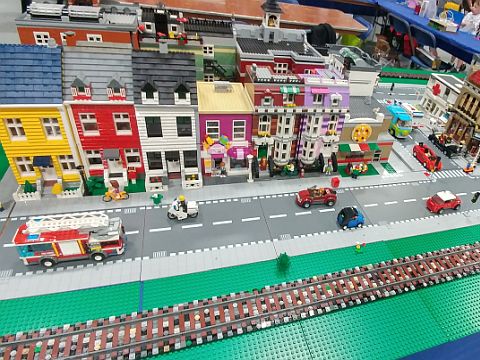 The water park was another large interesting section. I thought the “tire tubes” with people floating down through water channels in the park was a particularly creative idea (and not particularly hard to build). The yellow water slides that towered over four stories with covered tubes also caught my eye. I think it is, again, much more creative, rather than difficult, to build. One of the things lacking in my own layout is a sense of varied heights. Besides my own fascination with the layouts, it was interesting to observe the reaction of kids to the displays. 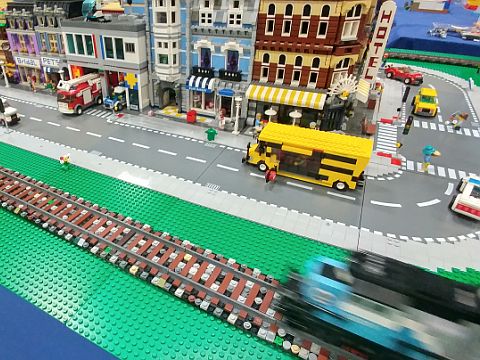 There were three or four model railroad groups exhibiting in the same area in different scales. As with LEGO, some of these layouts were modular, meaning that different builders had their own sections, which then connected together. These layouts tended to have big circles of track with empty middles. However, there were more tracks, more turnouts, and more sidings than a typical LEGO train display. And some layouts had really nice buildings that were tempting to model in LEGO. Items like grain elevators, oil/gas tanks, and electrical plants seemed especially challenging in LEGO. Although it’s not from this year, below, I have included a video from a previous train show at the same venue to give you a sense of what it’s like.

At the end, I didn’t spend anywhere near all the money I came with. I went back to the original LEGO vendor who was holding my purchases. They still had a stock of loose medium sized black plates in a bin. I could always use them for floors and roofs, so I picked out a handful. It was another $4, but then the vendor unexpectedly threw in another small bag of miscellaneous parts. A nice gesture! Total purchases for the show: $41. I know there are folks spending hundreds of dollars on one model train, but to me, it’s still money.

My feet were achy, and I haven’t eaten anything except a granola bar and a little bag of pretzels. It was time to head out. In the car, I opened a bottle of Snapple and drained it quickly, then ate another granola bar. I plugged in my GPS (I know that’s old fashioned) even though I didn’t really need it, and headed for the parking lot exit and toward the highway. It was another interesting Sunday diversion. Here are a couple of more pictures from the train displays. 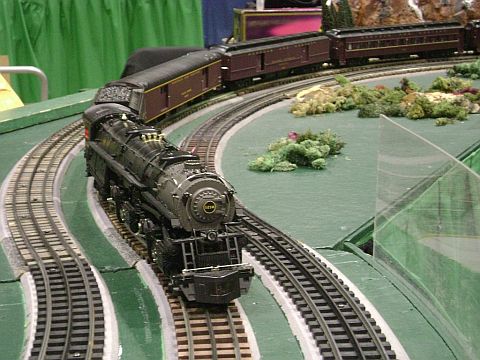 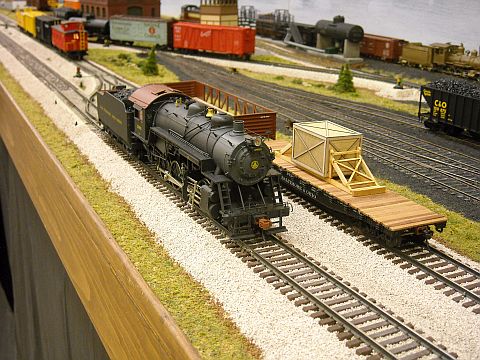 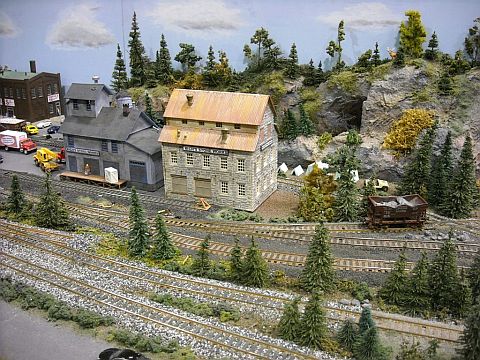 I hope you enjoyed this story. Do you visit train shows yourself? Have you found any good LEGO train layouts or great LEGO bargains at train shows? Feel free to share and discuss in the comment section below.