Ever since the LEGO Ideas platform became available to the public, I’ve been thinking about submitting a product idea that could potentially become a future LEGO set. However, I didn’t want to just throw anything up there. Putting my best foot forward was a priority if I wanted my project to have a chance at success. Having built and reviewed a number of LEGO Ideas sets, I feel a bit more confident now in my own abilities and in understanding the standards for LEGO Ideas models. At the same time, my local LEGO User Group has been preparing for an upcoming show, and thus I had a chance to knock out two projects at one go. And thus, I’m going to introduce you to Ahoy’s Seafood Restaurant! 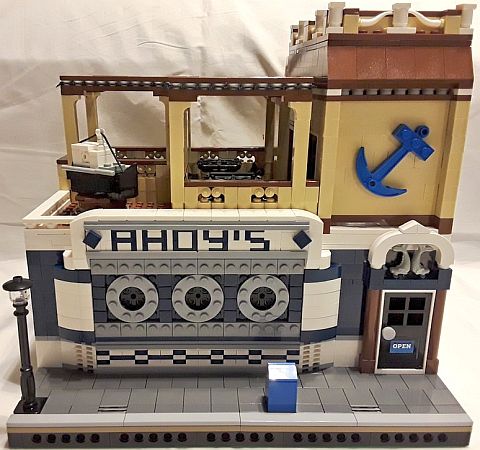 Sure, you might be thinking that I’m just another person trying to make their own LEGO Modular Building. Although this is partially true, it’s not for the reasons you might think. So, let’s discuss the preparations that went into this project.

Some years back, my LEGO User Group had a show where the theme was movies. As my contribution, I made a romantic movie scene that was framed by simple faux buildings. Among these were a Tex Mex restaurant, a flower shop, a candy store, a big department store, and Ahoy’s Seafood restaurant. Out of all of these, I really liked the look of Ahoy’s and wanted to revisit the idea later down the line. 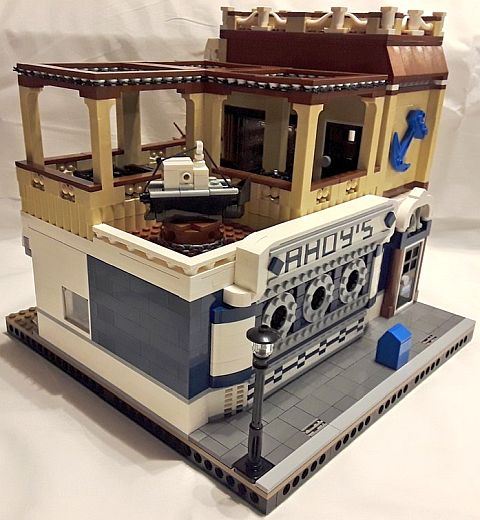 The primary reason for this desire was that it was a business that didn’t have much representation in LEGO. If you look hard enough, you will find an old crab shop restaurant, and in the #70620 LEGO Ninjago City set there is a sushi place, but finding a seafood restaurant in the traditional sense hasn’t really been available. 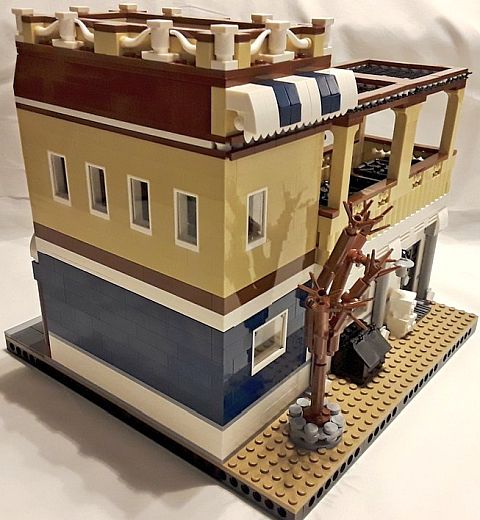 My second reason was that our LUG started experimenting with MILS (Modular Integrated Landscape System). We talked about this previously (see: LEGO Train Layout & Landscape Standards), but in brief, it’s a system that allows multiple people to build large cohesive layouts without getting together to discuss the details. The system mainly focuses on train layouts and landscapes, but it is also useful for tying together LEGO Modular Buildings. I figured that making something that easily integrates with this system but is different from what we have seen before will allow fans to make their layouts more interesting. Besides, if it does turn into a set, I can just say that Ahoy’s created a franchise! 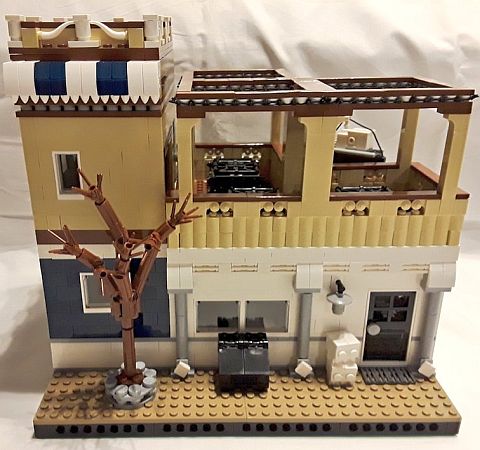 Finally, I just wanted to work on an interesting build. Adding in exquisite details became a major priority for me when designing this project, and I also wanted to feature some unique building techniques. Honestly, if I didn’t feel this model had enough to offer, I wouldn’t have bothered submitting it as a LEGO Ideas project. I’ve made other creations but I’ve never felt certain they were worth anyone’s time until now. Keep in mind, this is my own opinion and experiences when it comes to preparing a LEGO Ideas project, but I encourage those who are serious to put a similar effort into what you end up submitting. 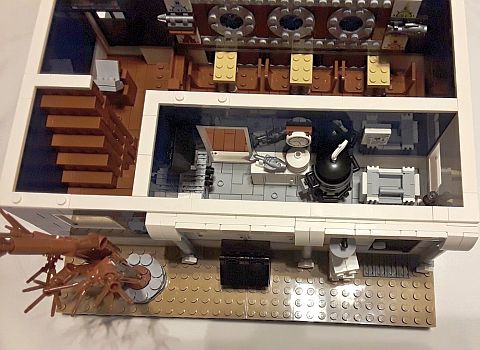 I mentioned above that I added some interesting building techniques in this model, so I probably should point some of them out. For starters, the netting on the second floor is something I’m surprised I don’t see more of. It’s the standard net piece used in ships and net cannons, but by stretching it out and building a frame for it, you can make a rather striking design. Keep in mind that the string is fairly thick and you’ll need to use 1×1 round plates to make room for the net. 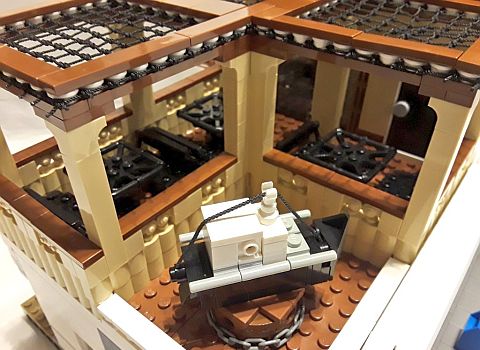 Next up we have the sign on the building. Some may recognize the letter styling from Al’s Barber Shop in the #10246 LEGO Creator Detective’s Office, or the Hot Shot sign in the LEGO Hot Shot Carnival set we talked about at the Brick Breakdown: LEGO Hot Shot Carnival review. What’s different is that in my model all the letters are free-floating. To accomplish this, I used large rail plates and connected them using LEGO Technic pin sleeves. From there, everything is just slid into place. I did the same thing under the porthole windows just because I could. 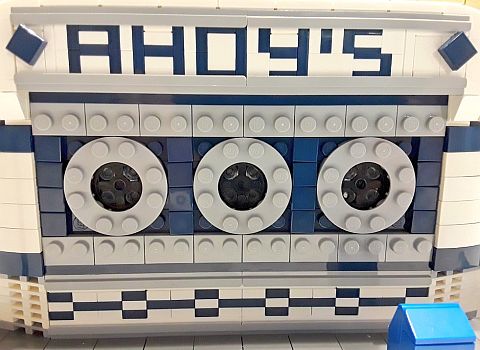 Speaking of the porthole windows, there is not a single element on them that is studs side up, save for some sides of a bracket plate. Again, I wanted a clean look to the windows and what’s inside of them. So, once again, I used a free-floating method where the turntable bases aren’t attached to anything. Additionally, I wanted the inside wall to look as good as the outside wall. This was done by sandwiching three plates worth of wall between lots of 1×2 brackets to form a sideways wall. 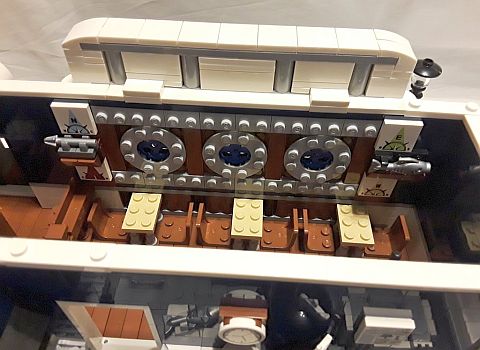 Then, there is the tree in back. Ever since the plant stems came out with a bar connection down below, I thought they made great candidates for tree building. So, throw a few brown connectors together, stick the plant stems at the end, and you got a pretty realistic looking tree. It’s up to you if you want to add leaves. There are of course other small details I’ve added to the model, but I wanted to highlight some of my favorites. 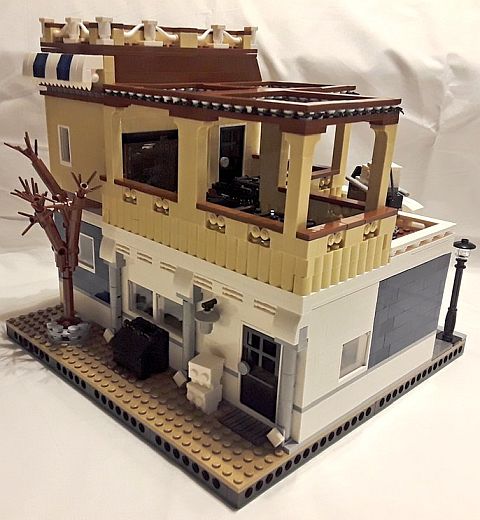 Truth be told, the submission process is extremely simple. You enter a name for your project, add a main image, add up to 15 more images, provide a description, tag it with some keywords that apply, and then agree to the terms and conditions. The LEGO Ideas team will then review the project and let you know if there are any issues to correct. Keep in mind that even though the process is simple, there are ways to mess it up. 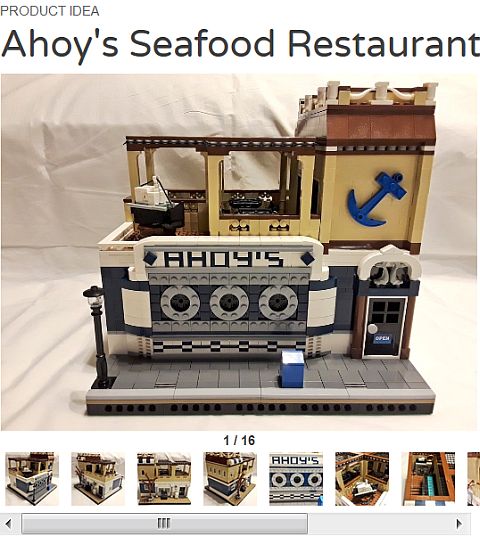 First, the name should be clear and tell the viewer exactly what the project is. Throw in too many fancy words or a convoluted name and no one will find what you made. For mine, I went with “Ahoy’s Seafood Restaurant”.

Next come the images. There are a couple of videos the LEGO Ideas team recommends you to watch to help with this. Some of the key points is to use a simple white or other plain background and try taking a whole lot of photos so you can slim them down to the best. Your photos are what people will be judging when they look at your project. 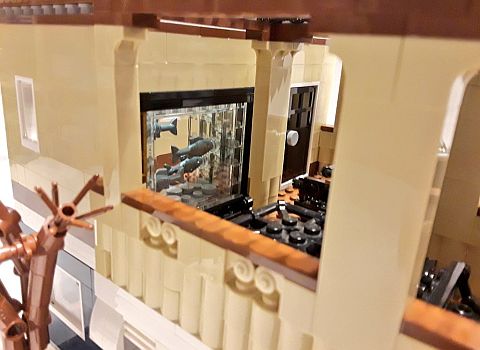 Moving on, there is the description of the model. It’s recommended to look at the most successful projects to see what their description looks like. Typically, you want to say what your project depicts, why your project is interesting, what features it offers, and roughly how many pieces it takes to make. There is even a warning not to over punctuate your description, which makes me think this is the area where most people need to revise their submission.

Then, you need to tag your project with applicable keywords. I’d suggest starting with the most direct words then working toward more general concepts. For my example, I began with things like “seafood” and “restaurant” which are directly in the name of the project before moving out to things like “fish” and “kitchen”. I even threw in “tree” since I figured I had an interesting one in the model. The nice thing is that the site lets you know which words have been used in other projects and the number of times they’ve been used. Too many overlaps might mean you have a lot of competition, while not enough overlaps probably indicate a word no one really searches for. I did a mixture of both.

Finally, we get into the agreements. This is where they ask if the idea is a licensed intellectual property or if you are the original idea owner. They also want to have you give up the rights to allow LEGO to make and market the model. If this concerns you, make sure to read the agreement carefully since they can hold the rights even if your model was not chosen. This is also the agreement that covers the standards they are looking for in an idea. Generally, they don’t want any depictions of sex, drugs, religion, violence, politics, or anything that can be seen as controversial or offensive. This is just in case you didn’t really consider this in your prep phase. But once all this is agreed to, you now need to wait for approval before trying to drum up support.

Now comes the hard part. Only those projects that reaches 10k votes will even be considered to be made into an official LEGO set. So where do these votes come from? Well, some will come from the LEGO Ideas platform itself. People are always curious as to what interesting models other LEGO fans are building. Then there are LEGO forums and fan sites where, from time to time, some of the LEGO Ideas projects are featured and shared with readers and followers. Getting in touch with social influencers is another great avenue. A social influencer is one of those people with a lot of connections on a social platform. This can be anything from YouTube, to Twitch, to Twitter, and so on. Knowing someone like this can help spread the word to others, who, in turn, can spread the news among their own friends and followers. Just make sure that you can provide them the best information to help you. For instance, say something to them like “Check out my project Ahoy’s Seafood Restaurant and, if you like what you see, consider supporting it at the following link and share it with your friends!”

It’s also important to remember that the LEGO Ideas platform places time constraints on how long your project can hang around to gather votes. This assures that the platform remains fresh and streamlined instead of being bogged down with old projects. So, if you don’t have your ducks all in a row for gaining support, you might want to hold off until you are ready. For starters, you will need 100 supporters within 60 days to then gain 1 year, which you’ll then need to get 1,000 supporters to get another extension. Make no mistake, this is where the majority of your work will take place.

Reaching out to all these people for support may be a bit tough just based on the LEGO Ideas site page alone. That’s because the project page is focused purely on the model and little else. So, when you share on other platforms, there is a whole host of other things you can talk about. For instance, if it is an original creation, you can say why you chose the color scheme. Also, you might mention that this creation has a personal connection to you. Or you can even give people more of a background about yourself. To give you an idea of what I’m talking about, check out my video below where I share some thoughts and personal information regarding the model. I hope you found this article helpful, especially if you have been thinking about submitting your own project to LEGO Ideas. And if you would like to support my project, you can do so at the following link: LEGO IDEAS AHOY’S SEAFOOD RESTAURANT

What do you think? Have you submitted or considered to submit your own model to LEGO Ideas? What was your experience with the process, or do you have any additional questions about the process we haven’t covered today? Feel free to share and discuss in the comment section below!