by Thita (admin) on September 24, 2019
in Featured LEGO Creations

As I mentioned last week, I have been working on a series of LEGO amusement park projects by combining sets from different themes. After combining a set from LEGO Friends with one from LEGO Ninjago (LEGO Set Mash-Up: Combining Friends & Ninjago), let’s continue with another combination. This time, we will bring together the #31095 LEGO Creator Fairground Carousel and the #60224 LEGO City Satellite Service Mission for a LEGO City themed free fall ride! The LEGO Creator Fairground Carousel is a 3-in-1 set (like most LEGO Creator sets), and I chose to build the free fall instead of the carousel. A LEGO City spaceship seemed like the logical choice for a mash-up after that. 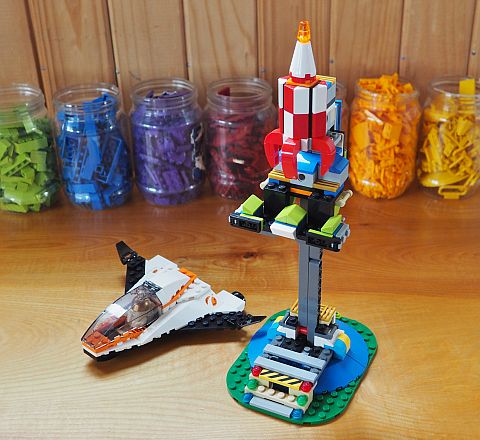 As those of you who have built LEGO Creator 3-in-1 sets know, there are usually several pieces left after building the alternate models. In this set, I was left with quite a handful of extra pieces, so I had plenty to work with – a good thing, because I was less than thrilled with the original color combination. I tore down the tin-tin rocket on top of the set, and then continued by stripping off and replacing the lime-green, blue, and other clashing colors of the base. 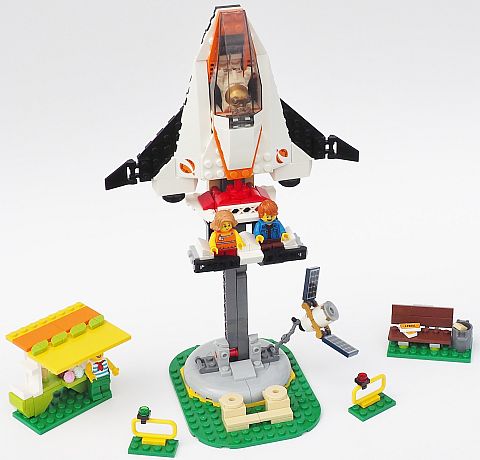 I was delighted to see how well the spaceship replaced the tin-tin rocket! It has the perfect amount of space at the back (originally designed for carrying the small satellite, which I ended up attaching to the base), with more than enough room to fit the LEGO Technic beams of the free fall ride. Other than that, I used pieces from the tin-tin rocket to change the blue and lime colors to red and white, which go much better with the LEGO City spaceship. The base also went from blue to light grey. Those nice round sloping light-grey pieces were leftovers from the carousel build. I’m not sure why they weren’t used as the base of the free fall in the first place – they’re the perfect size and a much more neutral color! (Yes, the blue, lime-green, yellow, red, and white of the original had me cringing.) 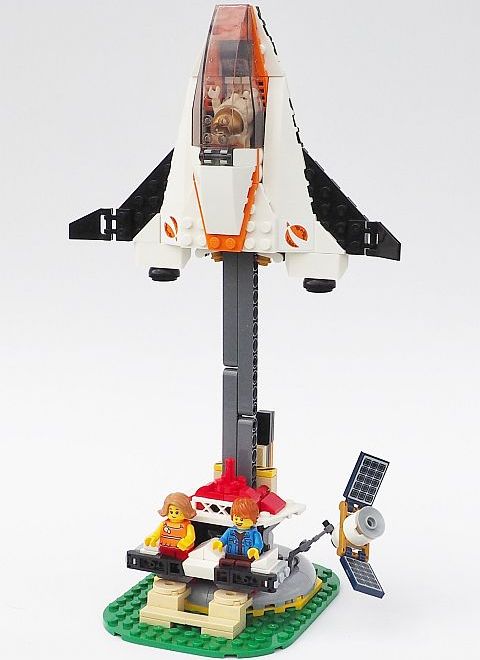 With the leftover pieces I was also able to build a bench and a little ice cream stand. There were still plenty of pieces afterwards, in all kinds of colors, but I didn’t want to just throw something haphazard together. 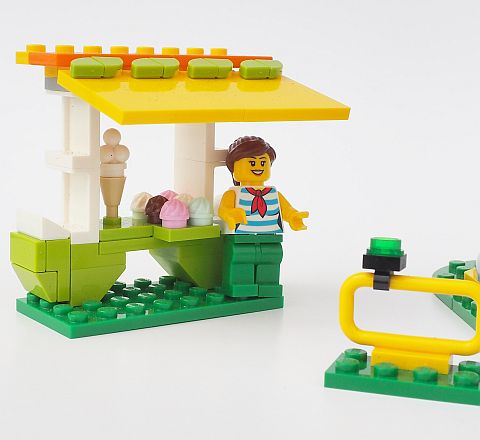 The mechanism for the free fall is a simple but ingenious one. A wedge piece on the back of the seat, a little crank that swings out, and down you go! What especially impressed me is that the wedge piece automatically pushes the crank out of the way when you slide the seat back up, and then the weight of the crank makes it catch – very easy to reload! 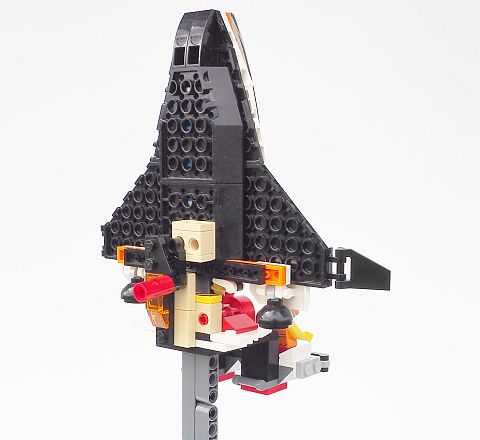 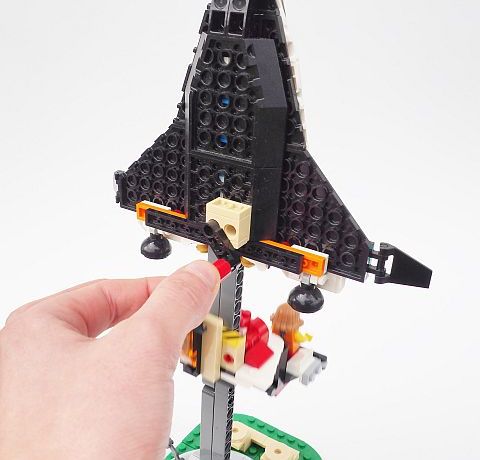 The satellite from the LEGO City spaceship set is a fun little build that I very much wanted to include. Fortunately, there were plenty of spare clips and I had no trouble attaching it to the base. I did have to make a point of angling it out of the way of the falling chairs though! 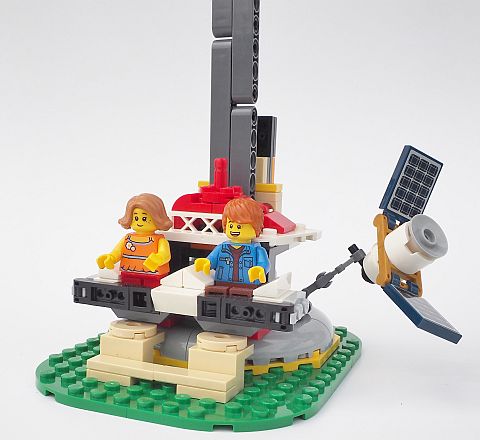 As you can see, these minifigures are enjoying their revamped ride. I hope the astronaut likes his new job as much! At least he has a nice view of outer space. 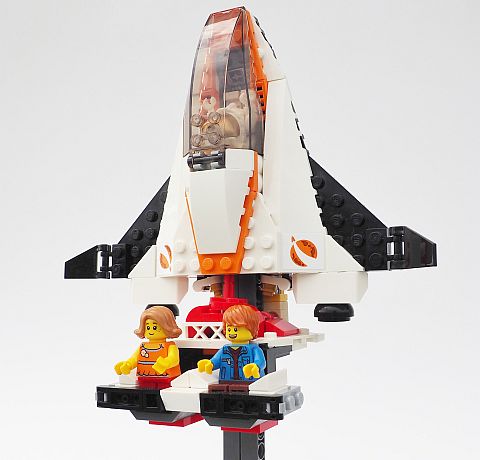 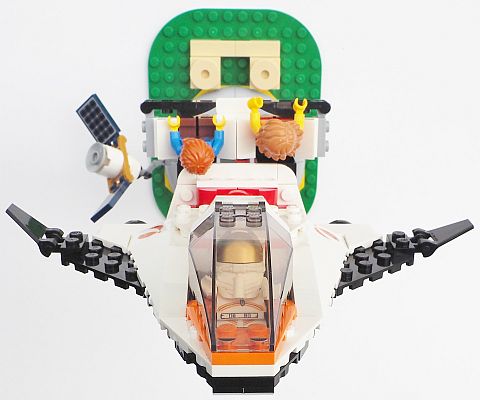 These two sets were surprisingly easy to combine, and I think the end result looks great! After the technical difficulties of my last mash-up, this one was a fun, straightforward build that makes me think LEGO Creator sets might be a good choice for mash-ups in general. 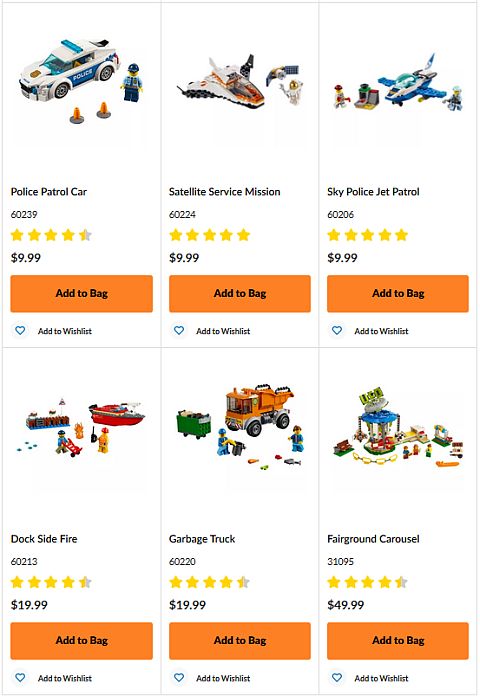 What do you think? Have you ever tried combining two sets into one creation? What challenges did you face along the way? And what do you think about this particular mash-up? Do the colors work? What would you have done differently? Feel free to share your thoughts and discuss in the comment section below!