Eight new LEGO Star Wars sets were released at the beginning of the month, including new sets for the upcoming LEGO Star Wars: The Rise of Skywalker movie scheduled for release on December 20th. Below, we will take a look at all the new sets to make sure you know what’s available for LEGO Star Wars fans. 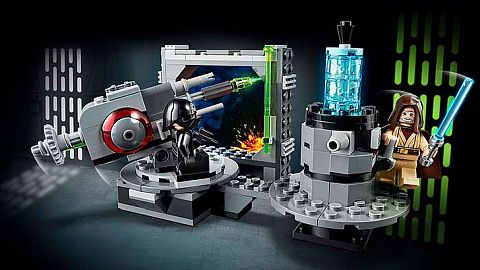 ➡ #75246 LEGO STAR WARS DEATH STAR CANNON: This is the smallest of the new LEGO Star Wars sets, based on a pivotal scene from the original Star Wars: A New Hope movie. It features a tractor beam control tower and a rotating/elevating laser cannon with spring-loaded shooter and storage clips for the missiles. There is not much going on in this set, except for the new hood piece for Obi-Wan, which you may or may not like (I like the original hood better). With only 159 pieces, not a whole lot of play-features, only two minifigs, and a price of $19.99, this set isn’t worth it at full price. If you can find it around $15, that would be much more reasonable. I did include a video-review in the player below by JANGBRiCKS, so you see the details of the set. Available at the LEGO Star Wars section of the Online LEGO Shop. 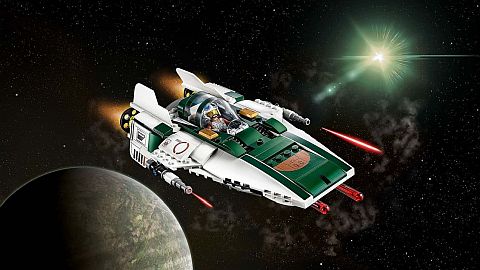 ➡ #75248 LEGO STAR WARS A-WING STARFIGHTER: LEGO designers have been doing an excellent job with the different versions of the A-wing, and LEGO Star Wars fans have been fond of collecting them. This time, the A-wing is from the Star Wars: The Rise of Skywalker movie, with an opening cockpit, retractable landing gear, wingtip cannons, and two very well integrated spring-loaded shooters. Great set overall, and the price is very reasonable too (269 pieces – $29.99). The only thing I’m not so fond of is that the A-wing relies on quite a few stickers. The two minifigs are Snap Wexley and Lieutenant Connix. The A-wing measures over 2” (7cm) high, 7” (20cm) long and 4” (12cm) wide. Overall good set, good price, and great parts for spaceship building! Available at the LEGO Star Wars section of the Online LEGO Shop. 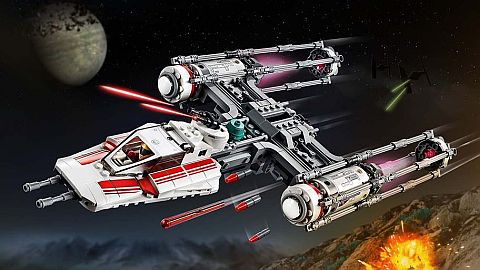 ➡ #75249 LEGO STAR WARS Y-WING STARFIGHTER: Y-wings represent another iconic ship in the Star Wars universe, and LEGO released several of them in recent years. This Y-wing is also from the Star Wars: The Rise of Skywalker movie, featuring an opening minifigure cockpit, folding landing gear, two spring-loaded shooters and top-loaded bombs with trigger-activated release. Overall a well-designed starship, and the set also includes five minifigures: Poe Dameron, Zorii Bliss, a First Order Snowtrooper, as well as the brand new D-O droid and a re-colored astromech droid. I would love to get several of little D-O for customizing! I agree with JANGBRiCKS in the video review below about the white printing on the windshield being so off and not matching the box-art being false advertising. And this is not the only set with this issue. The Y-wing measures over 2” (7cm) high, 16” (43cm) long and 7” (19cm) wide, comes with 578 pieces, and the price is $69.99. Available at the LEGO Star Wars section of the Online LEGO Shop. 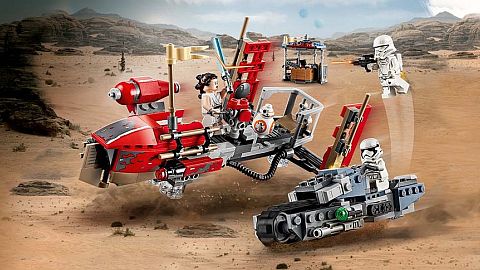 ➡ #75250 LEGO STAR WARS PASAANA SPEEDER CHASE: This is another set related to the Star Wars: The Rise of Skywalker movie. It features a transport speeder and a treadspeeder, although we don’t yet know how they fit into the story, so at first look it may not feel that exciting. The minifigures are Rey, a First Order Jet Trooper, a First Order Treadspeeder Driver, and BB-8 is also included. The set comes with 373 pieces, and the price is $39.99. Available at the LEGO Star Wars section of the Online LEGO Shop. 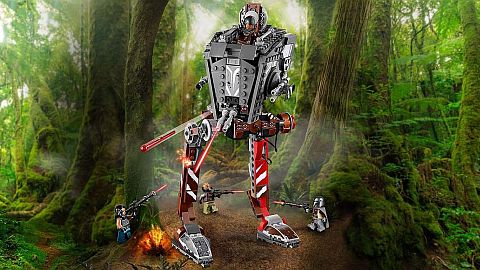 ➡ #75254 LEGO STAR WARS STAR WAR AT-ST RAIDER: This colorful walker is from the Star Wars television series, The Mandalorian. It is just about the same size and construction as the previous walkers, but I quite like the added color. It also featurer posable legs, a turning turret that opens up to reveal a detailed interior, plus two firing shooters. The highly detailed characters include The Mandalorian, Cara Dune and two Klatooinian Raiders. I do recommend watching JANGBRiCKS review on this set (included in the player below), as he does a detailed comparison with the previous walkers. Comes with 540 pieces, and the price is $49.99. Available at the LEGO Star Wars section of the Online LEGO Shop. 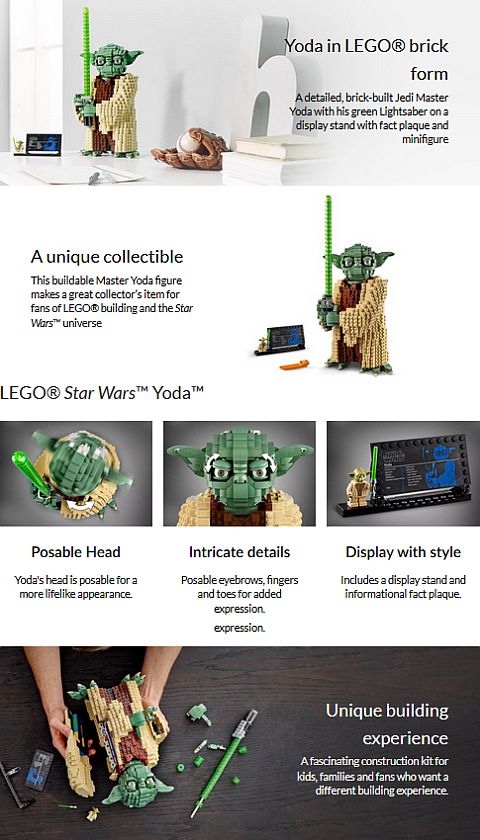 :arrow #75255 LEGO STAR WARS YODA: The first brick-built Yoda statue was released back in 2002, and I feel that this new version is a worthy upgrade. The face is spot on, and it even features movable eyelids for different expressions! The head, fingers, and toes are also posable. Yoda stands about a foot tall, and he holds his signature green lightsaber. There is also a fact plaque with details about Yoda and a stand to mount the included Yoda minifig. It’s a little strange that the statue uses sand-green while the minifig is olive-green, but other than that this is a nice set and great building experience for LEGO Star Wars fans. The price is also good; $99.99 with 1,771 pieces. Yoda is available at the LEGO Star Wars section of the Online LEGO Shop. 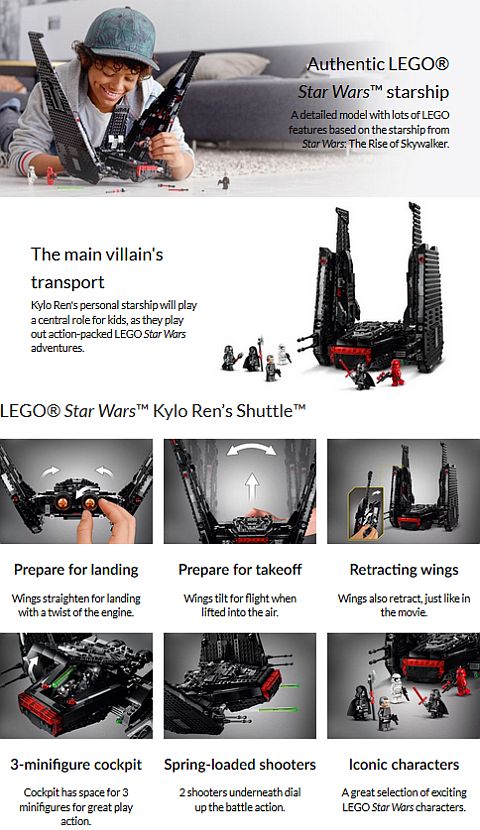 ➡ #75256 LEGO STAR WARS KYLO REN’S SHUTTLE: As you may remember, the 2015 version of Kylo Ren’s shuttle had some inaccuracies due to LEGO not getting enough information about the design before the movie was released. Most notably the wings weren’t able to fold, and the color was too light (gray instead of black). The new set fixes all of that and adds even more authentic details (look at all that greebling!). With the wings extended, the shuttle measures over 13” (35cm) high, 8” (21cm) long and 19” (50cm) wide. The mechanism to fold the wings works beautifully, and the wings can also be shortened by folding the to parts down (this was also a feature of the earlier set). There’s also an opening access ramp, two spring-loaded shooters, and a cockpit with space for three minifigs. The six minifigures are Supreme Leader Kylo Ren, General Pryde, a Sith Trooper, a First Order Stormtrooper, and two Knights of Ren. Very nice set and great upgrades from the previous version! Watch the video-review below for more details. Comes with 1,005 pieces, and the price is $129.99. Available at the LEGO Star Wars section of the Online LEGO Shop. 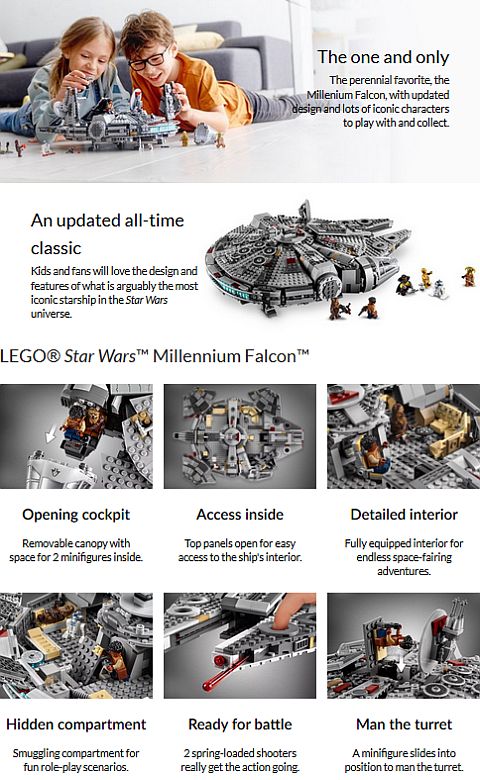 ➡ #75257 LEGO STAR WARS MILLENNIUM FALCON: LEGO released the Millennium Falcon numerous times in several sizes. This particular Falcon is about 5” (14cm) high, 17” (44cm) long and 12” (32cm) wide, comes with 1,353 pieces, and the price is $159.99. There are some pretty major differences in the design of this set that are worth mentioning. Firstly, the mandibles are integrated into the main body so much better than in previous smaller Falcons. I’m really happy to see this as the awkward angles of earlier models always bugged me. The cockpit sits further back and the top opens in larger slices – both of these features have plusses and minuses, but overall look good. External features include rotating top and bottom gun turrets (bottom turret fits two minifigs), two spring-loaded shooters, a lowering ramp, and an opening cockpit with space for two minifigures. Interior details include a cargo area, navigation computer with rotating chair, couch and Dejarik hologame table, galley, bunk, hidden smuggling compartment and a hyperdrive with repair tools. The five minifigs are Finn, Chewbacca, C-3PO, Lando Calrissian, and Boolio, plus you also get R2-D2 and another of the D-O droids we talked about above. Available at the LEGO Star Wars section of the Online LEGO Shop.

Besides the above-mentioned eight sets, also remember that the #75245 LEGO Star Wars Advent Calendar is available, and of course there is also the massive #75252 LEGO Star Wars Ultimate Collector Series Imperial Star Destroyer which we talked about before (see links at the end of this post). You can find all the currently available sets at the LEGO Star Wars section of the Online LEGO Shop.

What do you think? How do you like the new LEGO Star Wars sets? Are you planning to get any of them? And are you excited for the new movie? Feel free to share your thoughts and discuss in the comment section below!