Although LEGO no longer releases as many LEGO BrickHeadz sets as they did a couple of years ago, the theme is still well and alive, mainly focusing on blocky brick-built characters for holidays and special occasions. Early 2020, we are getting five LEGO BrickHeadz sets, which is what we’re going to talk about today. 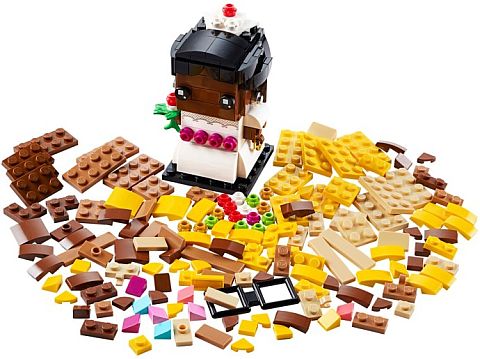 ➡ #40436 LEGO BRICKHEADZ LUCKY CAT: The maneki-neko (Japanese for “beckoning cat”) is a commonly seen Japanese figurine which is often believed to bring good luck to the owner. The figurine depicts a cat beckoning with an upright paw, and is usually displayed at the entrance of shops, restaurants, and other businesses. In addition, the beckoning cat can be found as keychains, piggy banks, and other accessories. Because the figurine is also popular with Chinese merchants, it is also referred to as the “Chinese lucky cat”. (Click images for larger view.) 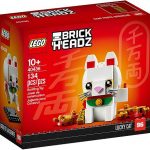 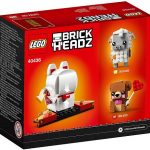 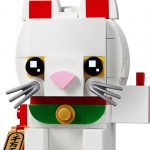 According to the set description, the LEGO BrickHeadz Lucky Cat celebrates the Chinese New Year. The #96 on the box indicates that this is the 96th LEGO BrickHeadz character, which could be important to know for collectors. The cat has long whiskers, a cute pink nose, and a lever at the back to move the right paw up and down. The left paw holds a printed pearl-gold 1×2 tile with Chinese inscription. The cat sits on a 6×6 black base that has become standard for LEGO BrickHeadz sets, but it also has elaborate red and gold decorations on the sides. This is a cute set overall that would make a nice New Years gift. 134 pieces. Price: $9.99 – AVAILABLE JANUARY 1ST

➡ #40379 LEGO BRICKHEADZ VALENTINE’S BEAR: Just like the cat, the bear is another sitting character on an elaborate base that is build in a similar fashion as the base of the cat. The base represents a picnic blanket spread out on the grass, and also includes a little brick-built bee, a honey jar, and colorful flowers and pink hearts. The bear holds a large red heart, which is a fairly new piece. The collectors’ number for this set is #97. Another cute gift item. 150 pieces. Price: $9.99 – AVAILABLE JANUARY 1ST 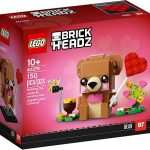 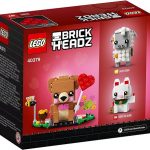 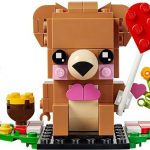 ➡ #40380 LEGO BRICKHEADZ SHEEP: This set celebrates Easter, and will be available in February. The collectors’ number is 100. Again, we see the same type of extension to the standard LEGO BrickHeadz base, this time with a flower and a couple of painted Easter eggs. I quite like how the sheep’s wool is made with 1×1 round plates, and tiles, the cute nose, and curl of fur over its forehead. Also notice that the sheep is holding a paintbrush. No special elements here, but still adorable. I don’t know the piece-count for this set, but I assume it’s similar to the other two above. The price should be the same as well. – AVAILABLE IN FEBRUARY 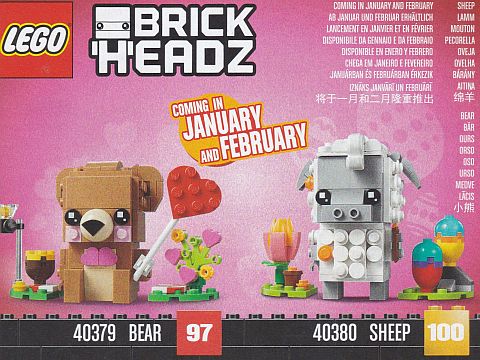 Before talking about the next two sets, I just wanted to mention that my all-time favorite LEGO BrickHeadz set is the #41597 LEGO BrickHeadz Go Brick Me customization box from 2018. The set came with 708 pieces, decorative stickers, and an instruction book with base models to build, mix, and match all types of characters. You could build your friends, family, favorite characters, etc. It was basically a fun and creative educational kit on designing and building brick-built characters. Ever since the set was retired, I have been hoping for more sets like it, and the upcoming bride and groom sets are very similar. 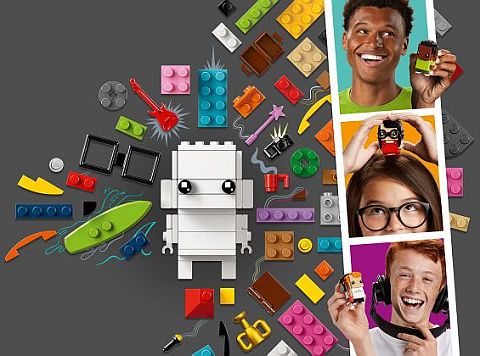 ➡ #40383 LEGO BRICKHEADZ WEDDING BRIDE: As you can see on the box, this is a customization kit with at least fourteen different looks for the bride. The facial expression, hair, skin color, and accessories can all be customized. The set also comes with a special 1×4 printed piece that is part of the bride’s dress. The dress itself doesn’t have a whole lot of customization options besides changing out the color of the decorations at the front. Accessories include a pair of glasses, flowers, dress decorations, and a chrome-gold ring. 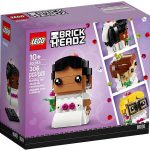 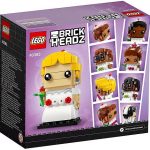 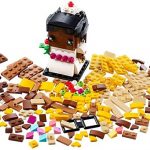 Both this set and the groom could make fun gifts for a couple about to get married, or could even be used as cake toppers. If you don’t know anyone who is about to get married, you can still used the sets similarly as the #41597 LEGO BrickHeadz Go Brick Me customization box, but you might want to switch out the parts of the dress. 306 pieces. Price: $12.99 – AVAILABLE JANUARY 1ST

➡ #40384 LEGO BRICKHEADZ WEDDING GROOM: Here we got the smartly dressed groom to match the bride. Just like in the bride set, there are plenty of pieces to build at least eleven possible looks, including changing the facial expression, hair, and skin color. Accessories include a pair of glasses, pieces for a brick-built hat, suit decorations, and a chrome-gold ring. And there is also a special 1x2x2 printed brick for his suit. 255 pieces. Price $12.99 – AVAILABLE JANUARY 1ST 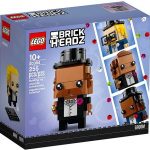 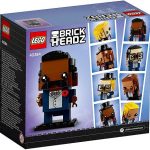 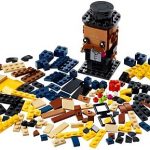 I like LEGO BrickHeadz because they are good for doodling while having a bit of a break from work, or when getting together with friends. They are easy to build once you get the hang of it, and it’s fun to make them look like someone you know. Thus, I prefer the free-building sets. And LEGO BrickHeadz also appeals to collectors who have been collecting all the brick-built version of super heroes, villains, and other movie and comics characters. If you like any of the new sets coming out in a few days, or you want to check out the current selection, visit the LEGO BrickHeadz section of the Online LEGO Shop. 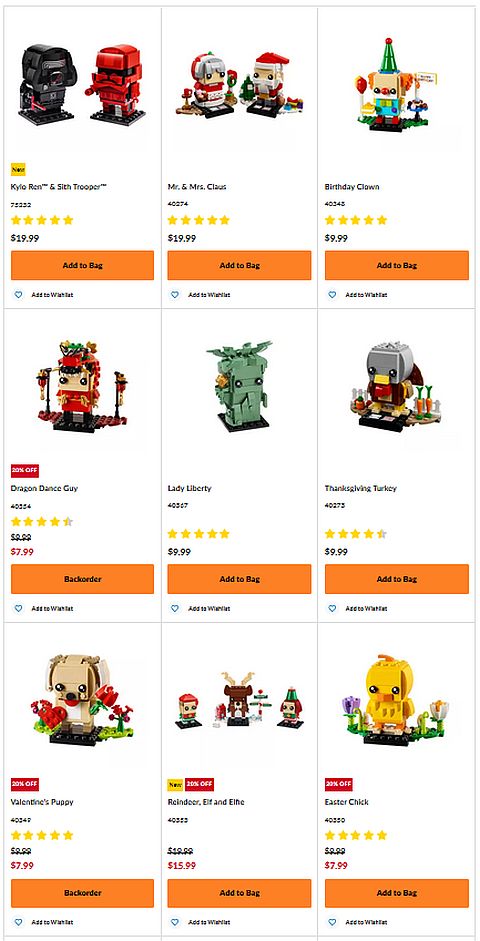