It has become a tradition at the LEGO company that employees receive a very special exclusive holiday set as a Christmas gift. These sets are only distributed to employees and are not available directly to the general public (although you can find them on eBay, BrickLink, and other secondary marketplaces). Some of the highlights from recent years have been the LEGO the #4002014 LEGO HUB Birds set from 2014, the #4002015 LEGO Borkum Riffgrund offshore windmill set from 2015, the #4002016 LEGO 50 Years on Track train set from 2016, the #4002017 LEGO Nutcracker from 2017, and my personal favorite, the #4002018 LEGO Santa & Reindeer set from 2018. And this year, LEGO really outdid themselves with an even more amazing set; the #4002019 LEGO Star Wars Yulatide Squadron X-mas Wing. 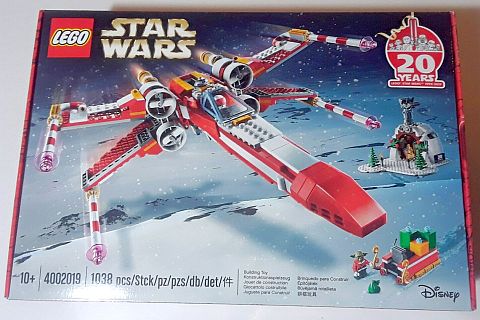 The #4002019 LEGO Star Wars Yulatide Squadron X-mas Wing is a playful take on the standard LEGO Star Wars X-wing design, like the #75218 LEGO Star Wars X-wing Starfighter from 2018. The Christmas X-wing has a red, white, and gold color-scheme, candy cane laser cannons, and a special feature to carry and drop off Christmas presents. The X-wing is piloted by a Yulatide Squadron Pilot minifigure that is exclusive to this set, as well as a standard R2-D2 figure. (It’s worth noting that this is the first employee gift with minifigures.) 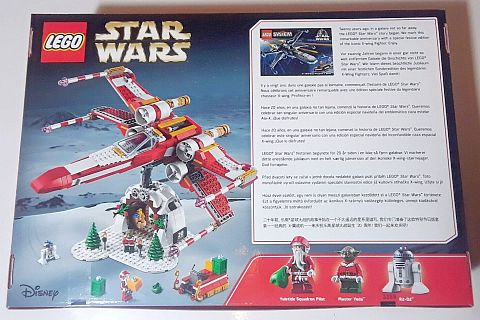 But that’s not all. The set also comes with an igloo for Master Yoda in Santa outfit (not exclusive), which also serves as a stand for the X-wing. Yoda is equipped with a hover sleigh to deliver presents. Overall a fantastic looking set with great play-features. The stand is especially unique, and I wish other X-wing sets came with something similar. In the video below you can watch LEGO designer Joseph Patrick Kyde talk about this very special X-wing.

The set includes 1,038 pieces, all of which are available in other sets. This means you could build the LEGO Star Wars Yulatide Squadron X-mas Wing yourself, if you don’t want to pay for it on the secondary market. However, I would add that the box of the set is also very special, so it may be wroth getting it. It opens up like some of the other higher end LEGO sets with a lid on top. The entire box is decorated both inside and outside, and there are graphics inside to show you who to store the assembled set inside the box. The packaging and presentation is tastefully done and a delight to open.

At the back of the box, there is the following text in several languages: “Twenty years ago, in a galaxy not so far away, the LEGO Star Wars story began. LEGO marks this remarkable anniversary with a special festive edition of the iconic X-wing Fighter. Enjoy!” Below, I have included a video-review of the set by RacingBrick so you can see it in full detail.

The #4002019 LEGO Star Wars Yulatide Squadron X-mas Wing could be a very special addition to an X-wing collection, or even a whimsical add-on to a LEGO Winter Village display. Unfortunately, as this set is for employees only, you will have to either build it yourself, or purchase the set on the secondary market. Here are the listings on eBay:

What do you think? How do you like the #4002019 LEGO Star Wars Yulatide Squadron X-mas Wing? Do you wish it was released as a regular LEGO set? Would you add it to your collection? Feel free to share your thoughts and discuss in the comment section below!

Previous post: LEGO Survey: What If You Were the CEO?