As we discussed the other day, during the first half of March, the freebie LEGO is offering with purchases of $99 or more is the #40370 LEGO Trains 40th Anniversary Set. I wanted to talk about this set in detail because it has great significance to LEGO train fans, LEGO fans who grew up in the ’80s, and LEGO collectors in general. 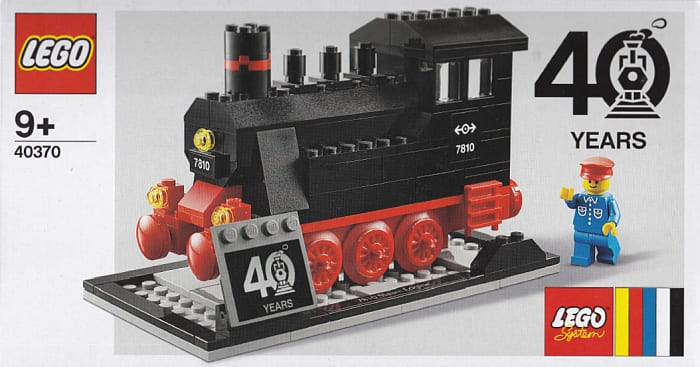 The #40370 LEGO Trains 40th Anniversary Set is an almost exact replica of the #7810 LEGO Push-Along Steam Engine from 1980. This is the year when the switch was made from the original blue tracks to light-gray, and LEGO trains became more widely available. Some of the sets included full trains, while others single engines, engines with tenders, as well as sets with extra train cars. Train track packs, motorization options (4.5-volt and 12-volt), and light kits were also available. LEGO was really into motorization those days, and older LEGO fans still remember the era with fondness. 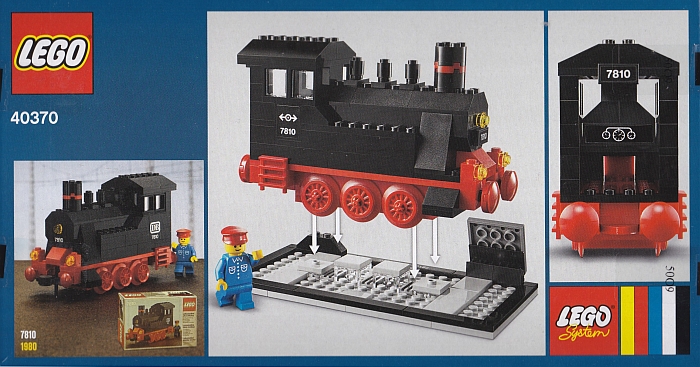 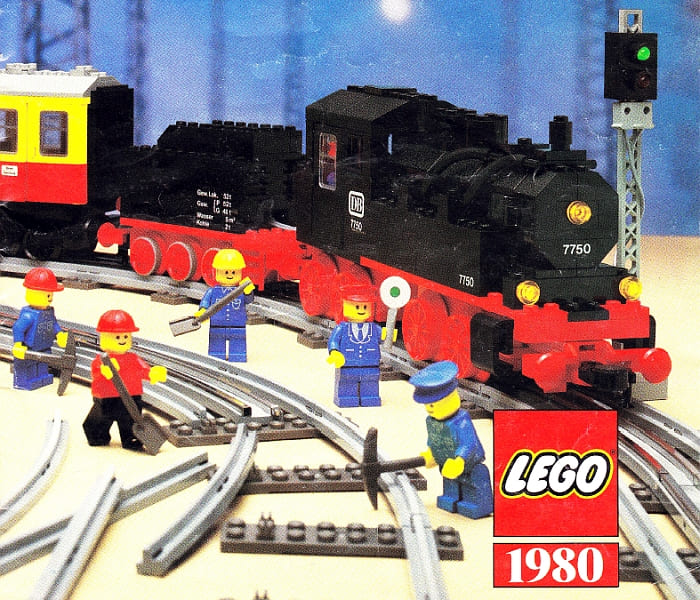 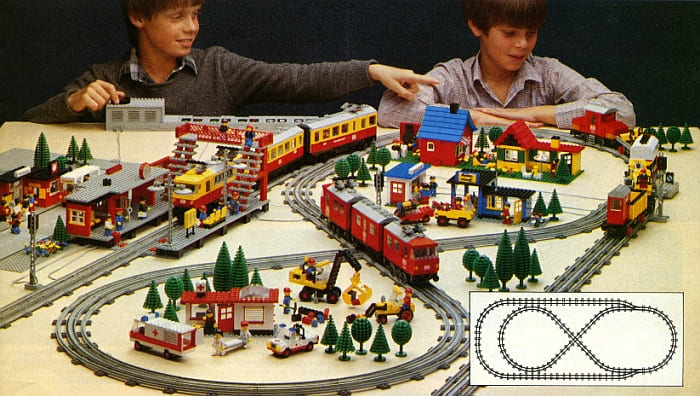 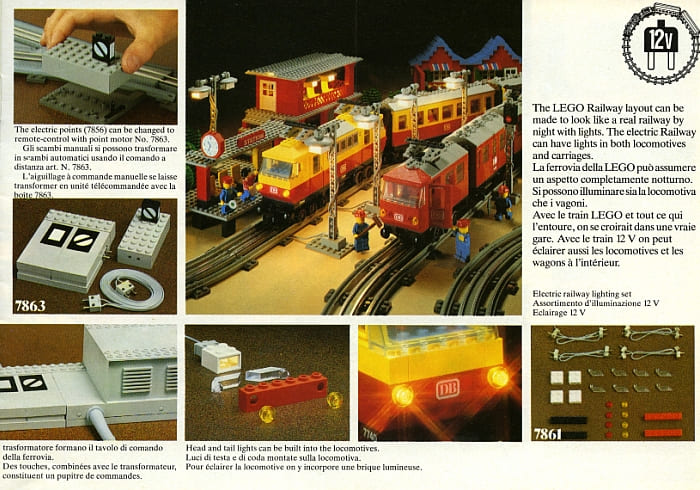 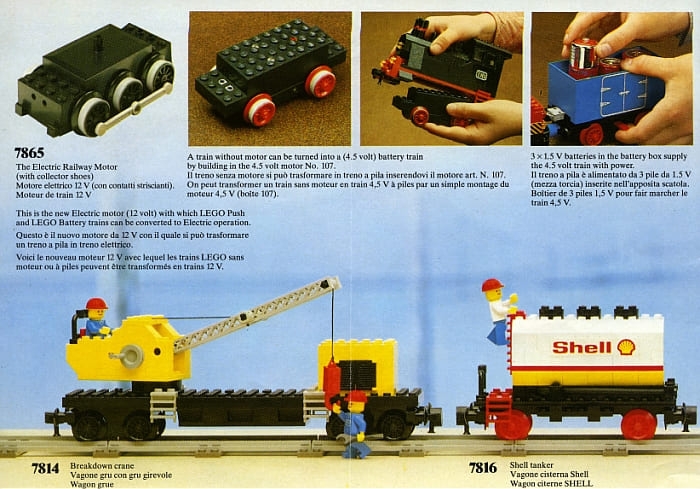 Thus, the #40370 LEGO Trains 40th Anniversary Set is not just an almost exact copy of the #7810 LEGO Push-Along Steam Engine, but also an accurate representation of the golden years of LEGO trains, specifically steam engines. The 40th Anniversary title is well deserved. 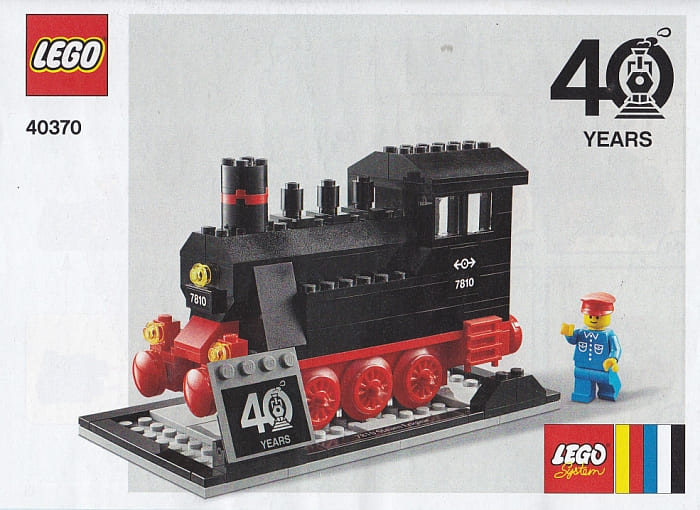 The box of the #40370 LEGO Trains 40th Anniversary Set is just about 10×5.5×3 inches, so it’s quite large. I’m not sure how the box size compares to the original box, but the box image is definitely very similar to the old image. The new box even features the old LEGO logo and stripes, as well as images of the older set and packaging. Both the box and the instructions booklet include the 40 Years of LEGO Trains logo. The box has simple tape seals, so if you are a collector, you can simply cut the seals without damaging the box.

Inside the box, you will find 3 sealed bags, a few large plates loosely, a sticker sheet, and the instructions. The stickers for the base are black with silver graphics, and for the train, black with white graphics. 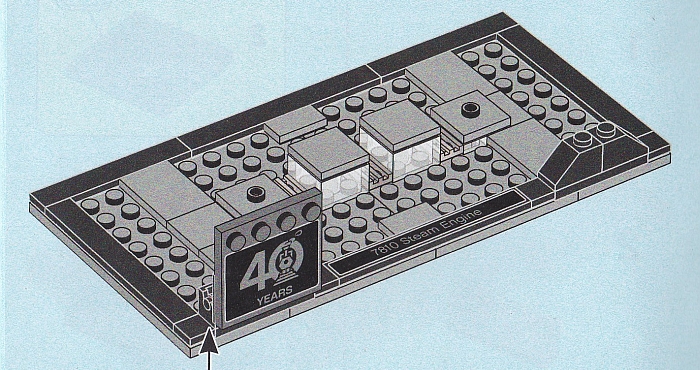 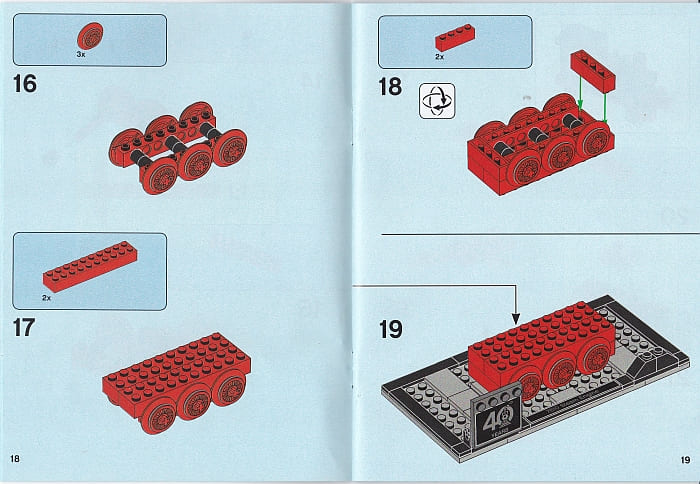 Even with the additional base, you will notice that the anniversary train contains more pieces than the original. This brings us to the second major difference between the new train and the old; the construction of the chassis. The train wheel assemblies used in the 1980s are no longer available, so instead, LEGO designers built up this section from a larger number of modern parts. Once you build the wheel section, you attach it to the base on top of a couple of clear 2×2 bricks, and begin working on the train body. 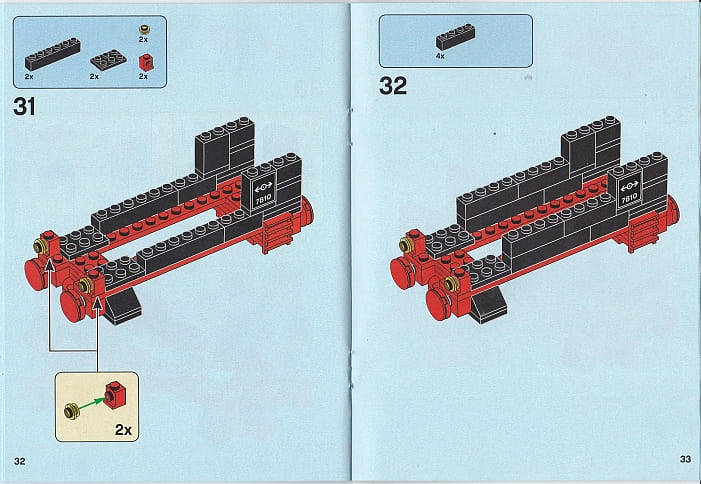 The train body is built very similar to the original, but there are a few minor differences. The sticker design and placement on the train cab is slightly different, and the numbered stickers on the front and back of the train are attached to 1×2 tiles rather than directly on the train’s body (all of these sticker placements avoid attaching stickers to multiple pieces). The train windows are the newer type, as the older design has been retired, and no coupling magnets are included at the front and back of the train. 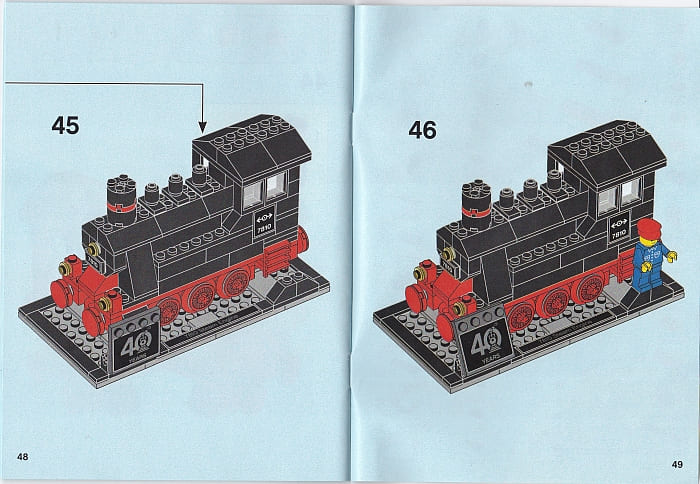 Once you build the body of the train, you simply slide it over the chassis and attach the studs. Although I haven’t tried it yet, I’m sure it would be super easy to switch out the chassis to a train motor, as the train body is basically like a hollow hull that can slip over and attach to the wheel assembly. 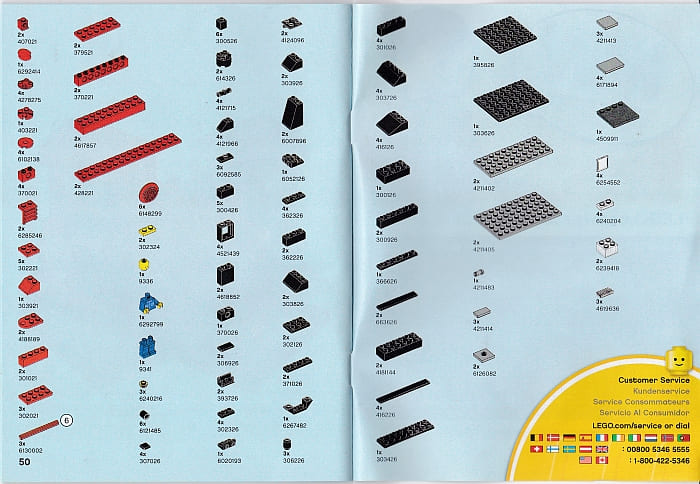 It’s actually a really nice experience building the entire train with simple, straightforward studs-up techniques, using plates, bricks, and slopes. It was very much the style of the 1980s, and if you grew up in that era, I think you will especially enjoy building this set. These days, you only find this simple building style in the LEGO Classic line.

The minifigure is an exact replica of the one in the original set; blue torso with white printing, unprinted blue legs, smiley face, and red cap.

All in all, the #40370 LEGO Trains 40th Anniversary Set is a fantastic set. LEGO designers definitely didn’t skimp on it, instead, they made it look as nice and accurate as possible. It’s a labor of love, and it’s actually surprising that the set is released as a freebie rather than a regular set. It’s definitely a worthy addition to the collection of any LEGO train fan, collector, or historian.

As I mentioned above, you can get a #40370 LEGO Trains 40th Anniversary Set between now and March 15th, with purchases of $99 or more. This offer is valid at official LEGO stores and the Online LEGO Shop.

What do you think? How do you like the LEGO Trains 40th Anniversary Set? Are you planning to add it to your collection? Do you have any LEGO train sets from the early years? Which one is your favorite? Feel free to share your thoughts and discuss in the comment section below!