With all the LEGO-related and other social events being canceled due to the virus, I haven’t been able to display my first LEGO Ideas project, Ahoy’s Seafood Restaurant. (You can read about the projects via the links at the end of this post). Judging by the statistics, chances are that project won’t get much farther then where it is right now, so I decided to take what I have learned so far about the LEGO Ideas platform and go back to work on another project that I call LEGO Coin-Op Machines. 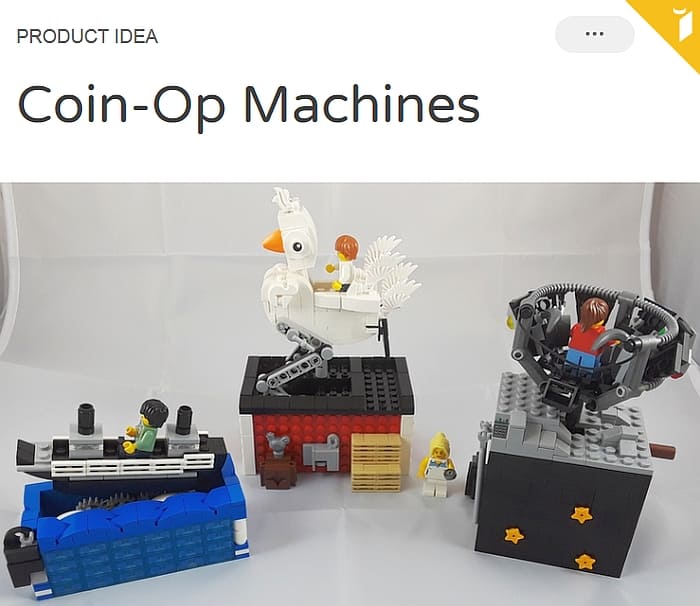 This time, I got into the realm of kinetic models. That’s right, they move and shimmy like a real toy! Wait, do real toys shimmy? Anyway, it is one of two major changes I made to my approach towards campaigning. I know some of you have considered submitting your own LEGO projects, so I thought that perhaps talking about the process I’m going through may also help you with your own attempts. Or, if you like, you can just follow my project and wait and see how it does before deciding if you would like to submit your own. Either way, let’s take a closer look at my new approach.

A MODEL FOR THE DISCERNING LEGO FAN

A big issue I ran across in my first attempt at a LEGO Ideas project was the fact I wasn’t appealing to the hardcore LEGO community enough. Sure, my building looked good, and there were interesting techniques used, but it was something that had been seen more than a dozen times already. I don’t mean the theme, in fact, I specifically chose the theme so that my project would be different from others. Rather, I’m talking about the end result. Ultimately, what I created was a building with a modular component that is full of details. This could be any number of modular buildings made by LEGO and by LEGO fans. My project was just another pretty flower sitting in a florist’s shop.

However, I can hear you think, why is appealing to hardcore LEGO fans so important? Well, to get those precious votes that can give your project a chance to become an official LEGO set, you need people who know about LEGO Ideas, have an account with LEGO Ideas, regularly browse LEGO Ideas, and vote on projects that they like. Chances are, casual LEGO fans won’t bother with any of this, unless the project is about an intellectual property, like a popular film or brand, they really care about. As I prefer to stay away from licensed properties, my largest pool of potential supporters is going to be hardcore LEGO fans who regularly hang out at the LEGO Ideas platform.

This meant that I really needed to step up my building game, as hardcore LEGO fans are used to seeing excellent projects, and are usually talented builders themselves. To achieve this, I decided to focus on a building category that rather intimidates me; models with moving parts.

Making a moving LEGO project usually means utilizing LEGO Technic elements. They are perfect for adding magic and hoodoo to an otherwise static project. And one of the best ways to demystifying how LEGO Technic components work is to study LEGO sets and custom models that use them. Once you familiarize yourself with LEGO Technic parts, you can start incorporating them into your own project.

Let’s just say that my first attempts at all of this was better at going crazy and tearing itself apart than actually, you know, working. It was like my model was yelling, “Why do I exist? Somebody stop me!” Poor little abomination never stood a chance. This is because I started on the deep end and drowned in the process. 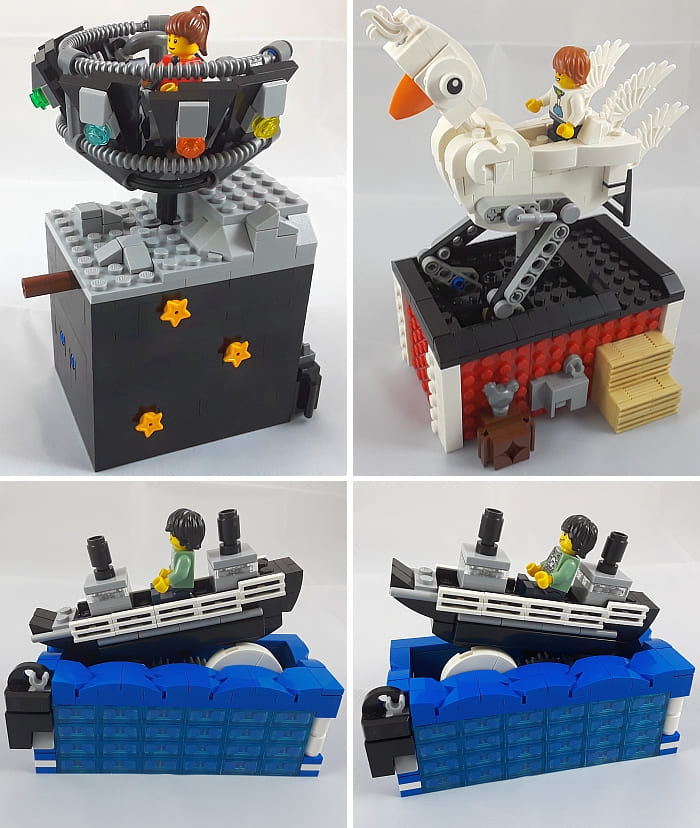 After a bit of retooling, I ended up with a better plan; I’d start simple and work my way up to more complex creations. And that actually became the theme of my new project. It includes three smaller coin operated rides, each using progressively more advanced building techniques. This allows LEGO fans to follow along and enhance their own skills, or three people with different skills levels could all build together. The three models in the collection are a small rocking ship called Titanic Waves, a floating saucer called UFO Uh-Oh!, and the Robot Chicken Walker, which is a homage to Jason Allemann (JKBrickWorks.com), one of my biggest inspirations. Below is a video of my project with more details, and here is the LEGO Ideas page for it: LEGO Ideas Coin-Op Machines

I tried a number of different methods to get supporters for my first project. After each method, I gauged the response. Turns out, the most active reaction times were after sharing the project on a broad platform. The only issue with this is you need to have a consistent presence to have explosive growth.

This means that those who have established themselves by streaming or podcasting regularly and already have an established fan base will have a better chance to make it to the finish line. Considering that my writing contributions are infrequent at best, I can’t depend on this method. Sure I can pander to everyone with each and every article I write, but I know I myself would find that annoying and probably actively avoid those pieces until the campaign ended.

However, even blogging, streaming, and podcasting may not be enough to get you the required 10k votes, so you have to look at additional methods to get people to take a look at your project. Turns out, interacting with other creators on the LEGO Ideas platform is a consistent way to get people to visit your page. Again, you don’t want to be annoying by just interacting in a superficial way and asking people to visit your project’s page.

What I do is that I support and interact with projects that I actually like. I may leave a comment saying what I enjoyed about their project, and I don’t ask for support in return. This may spark a conversation that can be beneficial for everyone. For example, a creator named Corg86 made a Gargoyles Animated Series project. I commented about my experiences as a child remembering the show… or at least what I could recall of it. We ended up having a conversation about cartoons. Another example is the creator XCLD who made an amazing Pipe Organ with as many authentic details as possible. Their project is like a history lesson in musical instruments, so we had an interesting conversation. Needless to say, I’ve been having a blast interacting with all these imaginative builders. They are also open to questions both dealing with the context of their creation as well as how they built certain parts. Think of this as your own personal LEGO convention display hall that is going on twenty-four hours a day, seven days a week, and can spark your own ideas, improve your building skills, and get potential supporters for your own projects.

Initially, I considered interacting with other fans as a job I’d need to do in order to get anywhere with a project. But what happened instead was that I found a new part of the hobby I didn’t know was available. And here’s the best part, you don’t even need to have a project yourself. You can just support others. I will say though from personal experience that it’s best to put limits on how much you interact. Otherwise, your inbox could get swamped and you can’t have a meaningful conversation. It’s up to you how much or how little you want to interact, but don’t burn yourself out in the process.

This experience has gotten me out of my comfort zone a little. It has demanded that I challenge myself more with what and how I build. It also opened me up to take in the creativity of others as inspiration, and it has socially connected me to others that share my passion during a time where we could feel more isolated than ever before. 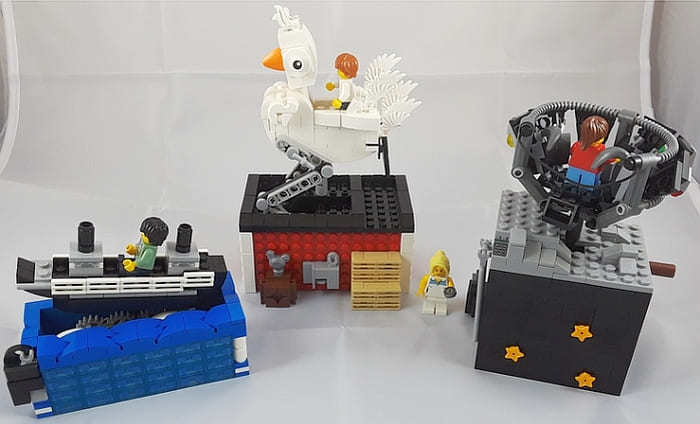 What do you think? Have you submitted any projects to LEGO Ideas? What work and didn’t work for you to get your votes up? And what do you think of the tips I talked about here? Feel free to share and discuss in the comment section below!