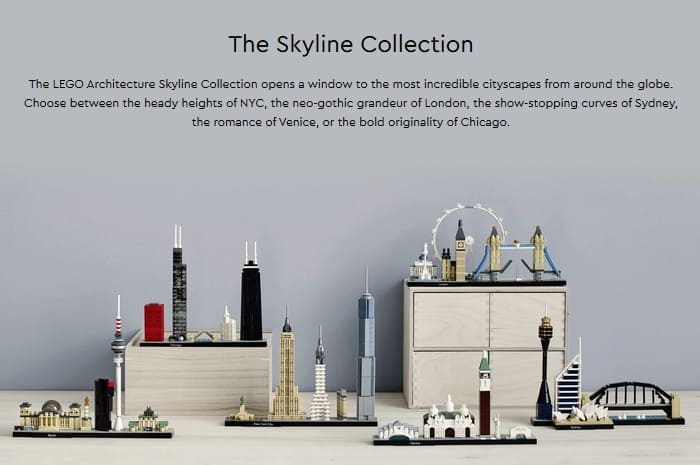 The #21051 LEGO Architecture Tokyo Skyline is an especially colorful LEGO Architecture set with the inclusion of bright colors, translucent colored pieces, and printed elements. Another nice feature of this set is that it includes more than usual landscaping elements. Mount Fuji in the background frames the entire skyline, and is a great example of forced perspective techniques. And the cherry blossom trees in the foreground really bring the whole scene to life. 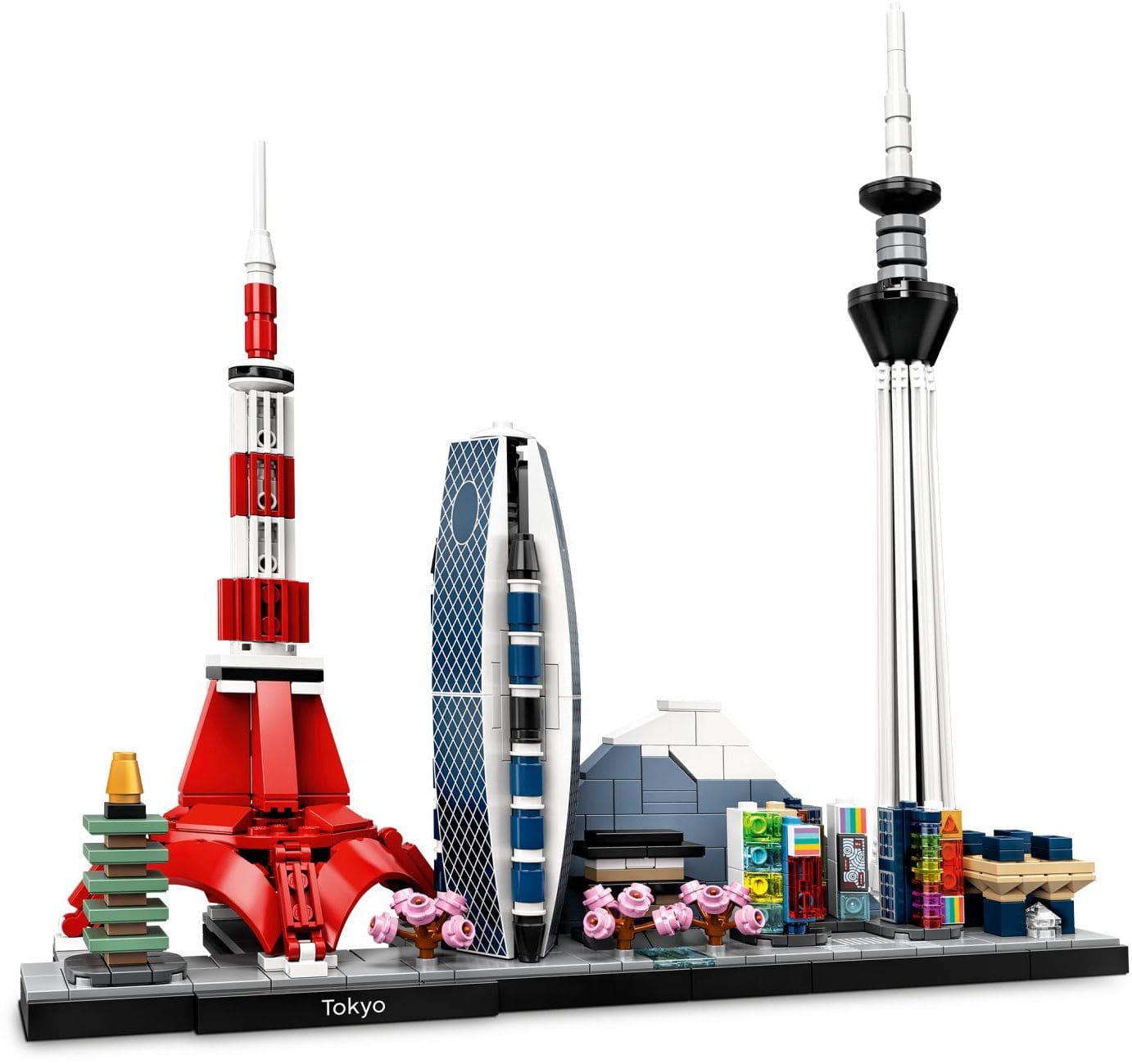 As far as the included buildings, the set features the Tokyo Skytree (the world’s tallest freestanding tower), the Tokyo Tower, the Mode Gakuen Cocoon Tower (the one with the printed curved slopes), and the Tokyo Big Sight International Exhibition Center. The cherry blossom trees represent Chidorigafuchi Park, the colorful structures depict buildings around Shibuya Crossing, and there is also an unnamed classic pagoda tower and a traditional gate (which may or may not represent the front gate of the Tokyo Imperial Palace). 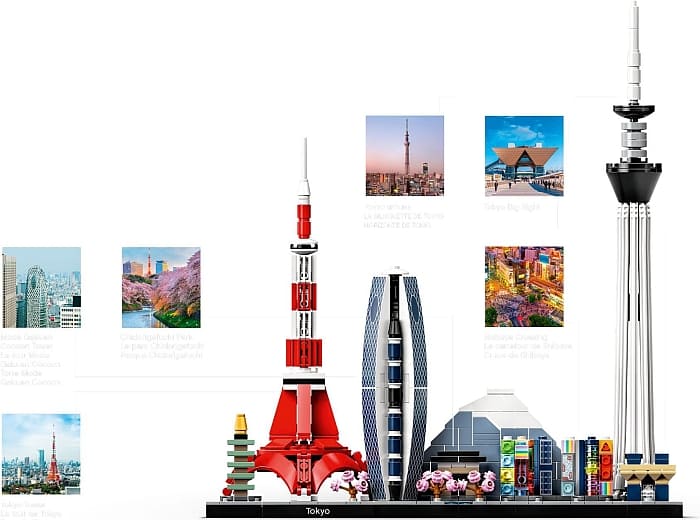 Most of the buildings are spot on, and are instantly recognizable. However, I feel that the design of the Tokyo Tower is questionable. It feels heavy compared to the airy design of the real world tower. LEGO designers tackled a tower with a very similar design in the #21044 LEGO Architecture Paris Skyline last year, so I’m not sure why they didn’t use the same techniques here. The Tokyo Tower ended up looking like a rocket ship instead of a tower.

I also feel that it would have been better if the pagoda and the gate were named buildings. One of the highlights of the LEGO Architecture sets is learning about real life locations from the instruction booklet. Having two unnamed structures when LEGO designers could have used actual buildings feels like a missed teaching and learning opportunity. Overall, I do think this is a nice set and a worthy addition to the LEGO Architecture Skyline collection. JANGBRiCKS will show you the set in more detail in the video below, and if you’re interested, you can get the set at the LEGO Architecture section of the Online LEGO Shop.

The white, dark-blue, tan, gray, and gold color-scheme of the #21052 LEGO Architecture Dubai Skyline makes this set look particularly refined. The subtleness of the olive-green trees and the interesting shape of the base adds even more to the sophisticated look. 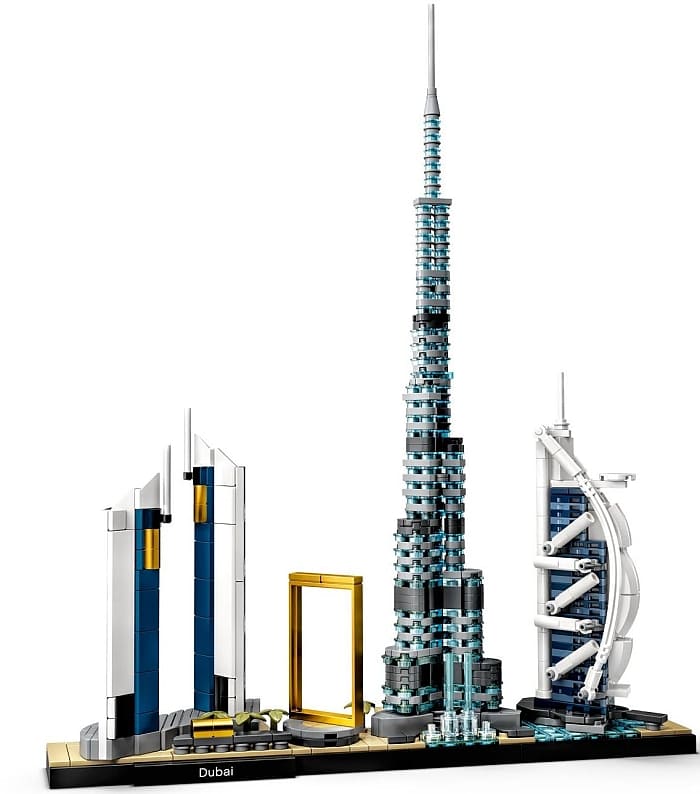 Dubai boasts some of the most spectacular buildings in the world, including the Burj Khalifa (the world’s tallest building on completion in 2010), the 7-star Burj Al Arab Jumeirah Hotel, the Jumeirah Emirates Towers Hotel – all of which are featured in this set. Additional structures included are the The Dubai Fountain and the extraordinary Dubai Frame, which allows visitors to see and take pictures of the entire city with a frame around it. 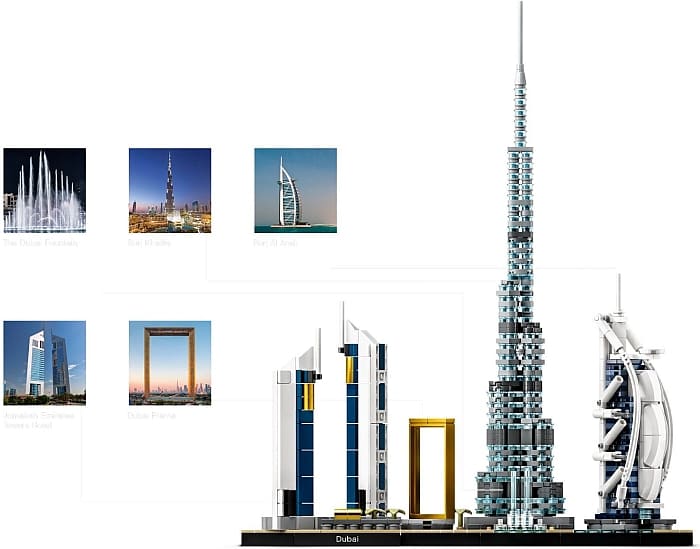 The two towers and the Dubai Frame look especially nice. The Burj Khalifa and the fountain in front of it are simple but effective builds. Unfortunately, the distinctive sail-shaped Burj Al Arab Jumeirah building didn’t turn out that well. The crossbeams attached to the sides are particularly unsightly. They are too thick, awkward, and the connection points (or lack of) are particularly weird. It’s a shame, because otherwise this would be a nice looking set. As the Burj Al Arab is one of the most iconic buildings of Dubai, and one of the most beautiful modern buildings in the world, it feels like LEGO dropped the ball on its design. To learn more about the set, watch the video-review below, and if you are interested to get it, it’s available at the LEGO Architecture section of the Online LEGO Shop. 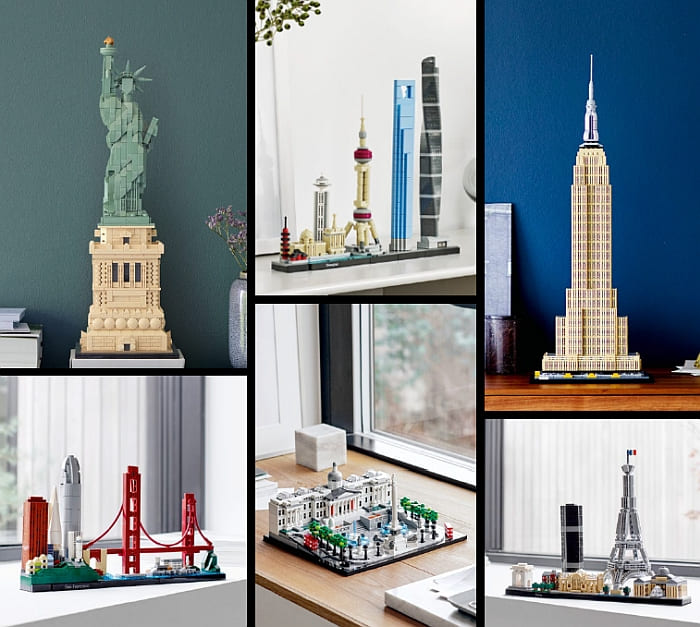 Next post: Knolling with LEGO – The Art of Organizing