My Entry to the LEGO Music to Our Ears Contest

by Thita (admin) on April 6, 2020
in Featured LEGO Creations

Like many of you during these unusual times, I found myself stuck at home with a bit more time on my hands than I knew what to do with. So, I turned to the LEGO Ideas platform, which is the home of the majority of official LEGO contests. Sure enough, one of the current contests caught my eye…

We already talked about the LEGO Ideas Music to Our Ears Contest (see links at the end of this post), but to recap, the challenge is to create a model that has something to do with music. The only major restriction is that the entries should remain under 3,000 pieces, so nothing too big, but other than that you can create whatever you like within the general contest and platform rules. The contest runs until April 20th, then there is the judging phase where LEGO Ideas judges select ten entries for a fan vote. There will be one grand prize winner and three runner up winners, and will receive a generous selection of prizes. But that’s not all. The LEGO Ideas Review Board will also look at the ten selected entries, and may consider it to become an official LEGO set! 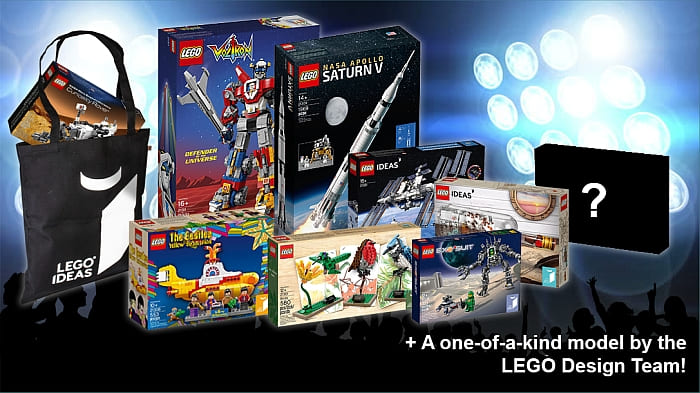 As you know, from my first attempt at a LEGO Ideas project (see links at the end of this post), obtaining 10,000 votes is the biggest hurdle for anyone to get their project considered to become an official LEGO set. Contests like this however give you a shot to get your project reviewed in another way. I was actually working on my second LEGO Ideas project when this contest popped up. So, while I was waiting for parts to arrive for my project, I figured I give the contest a shot. Below, I will share my contest entry, as well as what you can expect if you enter the contest.

Much of the submission process to LEGO Ideas contests is the same as entering a standard LEGO Ideas project; you have a limited number of characters to describe your model, you must insert every tag you can think of that might apply, and you must indicate if the creation is related to an already existing IP. 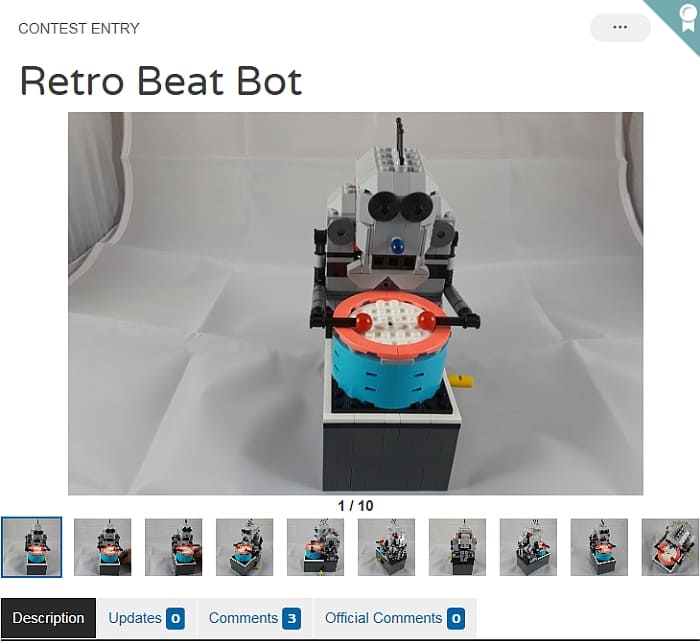 The only major differences are that you need to enter the submission through the contest link, and you are limited to 10 images rather than 15 like in a normal LEGO Ideas projects. Another noteworthy difference is that you don’t have all the stats from the LEGO Ideas site like you get with the standard LEGO Ideas projects. This is because the entries are sorted by judges and note by votes.

One thing I did different for the contest is that I created a video to show off the model and loaded it up to YouTube. I then took the link and inserted it into the description. This turned out well since it gave me another opportunity to talk a bit more about the design. You can do this for standard LEGO Ideas project too.

So I took notes of everything I learned from my attempts at pushing my Ahoy’s Seafood Restaurant project and applied it to this contest entry. I still wanted something original and not tied to an IP since I feel more comfortable talking about and sharing something entirely unique. Besides, what if I made a creation involving a band only for that band to be involved in some sort of scandal the following week. Additionally, the selection process for the winners is very different for this contest. I don’t have to try to stir up an existing fan base to help push my project forward. I need to start by impressing the LEGO designers that will pick the best models for a fan vote. 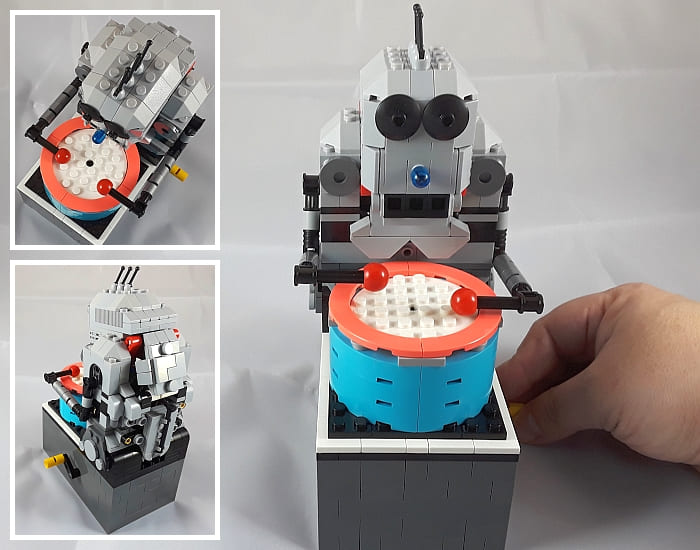 With all this in mind, I thought back on the LEGO Ideas projects that didn’t have an original IP and considered what they did to get their models to the 10k mark. Most of them involved something mechanically dynamic. The #21318 LEGO Ideas Tree House involved some interesting structural mechanisms, while the #21315 LEGO Ideas Pop-Up Book and #21305 LEGO Ideas Maze sets were more obvious in their mechanical abilities. The #21301 LEGO Ideas Birds set is kind of odd in that it was just so unique and pretty. 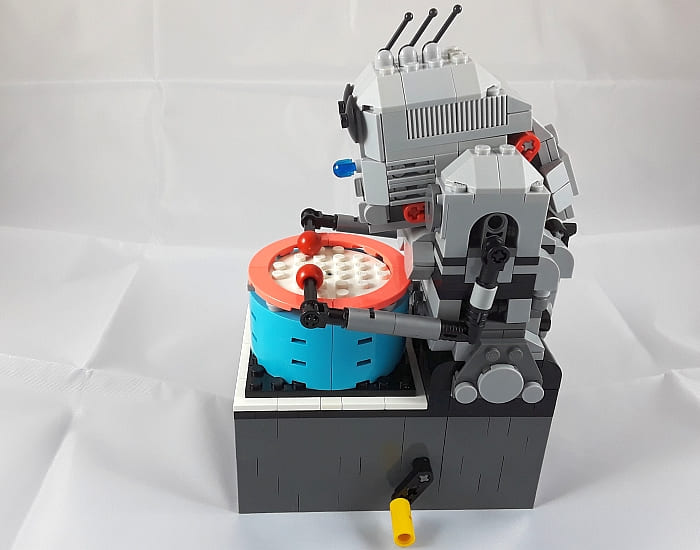 I decided I wanted to make a kinetic sculpture. For those of you unaware of what that is, a kinetic sculpture is simply a model that has a moving element to it. Usually the creation is some type of sculpture, like the #81000 LEGO Forma Koi model. It’s slightly different than, for example, the #10261 LEGO Creator Roller Coaster which has a kinetic element to it. For my sculpture, I wanted a drummer. I felt confident that I could get a couple of arms moving to hit a drum. As for the character that was doing the drumming, I’ve always been partial to robots and they are fairly inoffensive. Below, you can see an early prototype of how I built it. 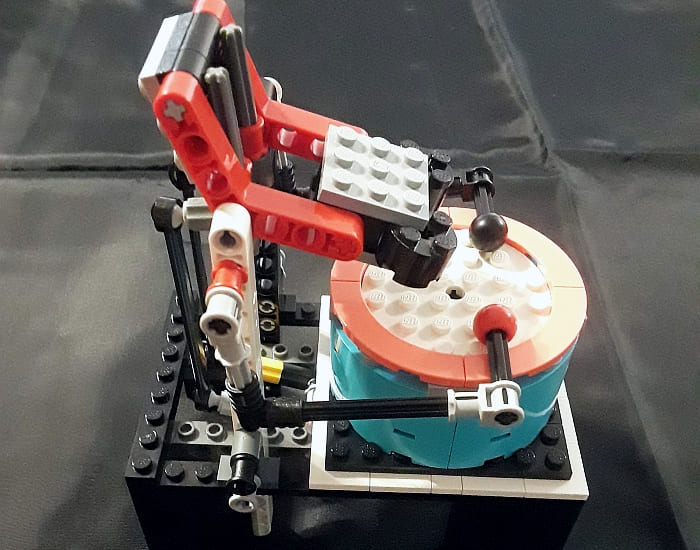 I created the drum first so I had a scale to work with. Then it was figuring out the moving parts. At some point I realized I could give the model a bit more life if the head also bobbed in time with each beat of the drum.

Granted, the thing may look like a mess at this point, but what I ended up with was a right and left mechanism that could be operated by knocking peddles up. I will say, it took a while before I got into building models like this. The biggest barrier had nothing to do with the techniques involved. Rather, I just didn’t know what parts were even available in the realm of LEGO Technic. Currently, my grasp is better than the average LEGO system user, but I’m in no way close to what a seasoned LEGO Technic user is capable of doing.

After submitting my entry, I did think there were things I could have done better. Fortunately, I don’t think anything I did is going to hurt me in the end. First and foremost, you should read the official rules before beginning a project. I kind of just heard about it and started building. It was only later that I learned of the 3,000-piece limitation. 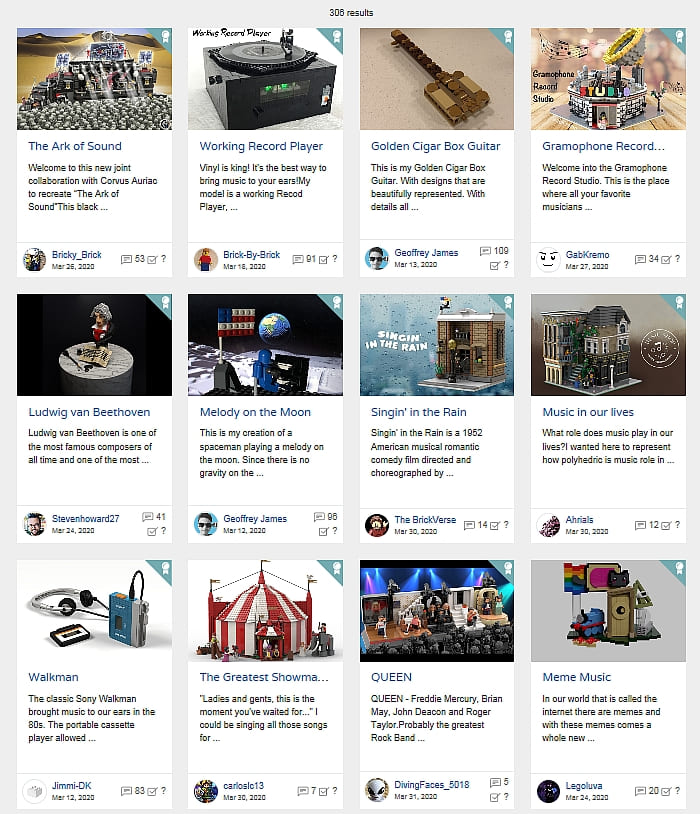 Next, if enough time has elapsed, try looking at some of the entries that are already submitted. This is a great way to make sure you’re not on the exact same wave length as another builder. Just to warn you, this can intimidate some builders. I want to remind you that rarely is something perfect and you always have a chance.

If there is a model you think is hands down better than the rest, try examining it with a critical eye. Is there some part of it that doesn’t mesh well with what the contest is asking? Is the story a bit weak? Did they do something that might disqualify them? Armed with these insights that can better prepare you for creating your own thing. Personally, I only looked at the other entries after mine was ready to go. I might have changed something about what I made or I might not, but preparation is an advantage that can’t be overlooked. 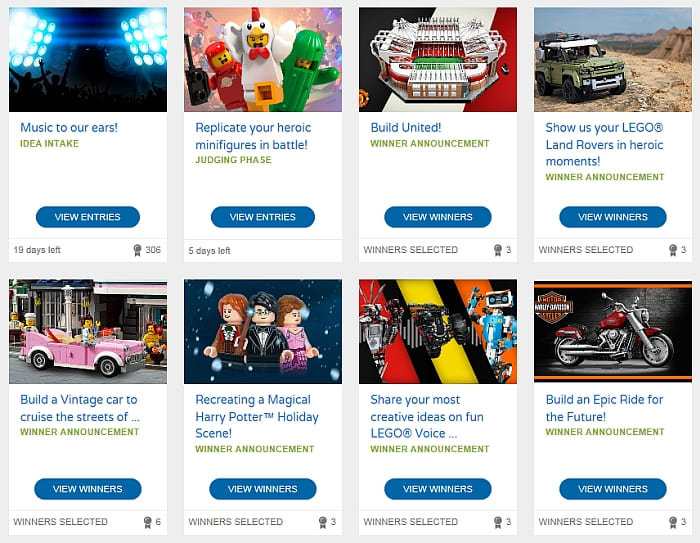 I hope you all are staying safe and can find a LEGO contest that speaks to you. Remember, builders don’t get bored even during hard times, they get creative! Are you participating in any of the current LEGO contests? Or are you planning to? Feel free to share and discuss in the comment section below!