The LEGO City collection usually consists of re-releases of perennial favorites like LEGO City Fire, LEGO City Police, construction vehicles, and some basic city buildings. As the sets are usually similar from one year to the next and they are mainly targeting young children, we usually don’t talk about them in detail. However, sometimes there are LEGO City sets that can be interesting to adult LEGO fans as well. In the 2020 LEGO City collection there are three sets that stand out; the #60253 LEGO City Ice-Cream Truck, the #60257 LEGO City Service Station, and the #60258 LEGO City Tuning Workshop. 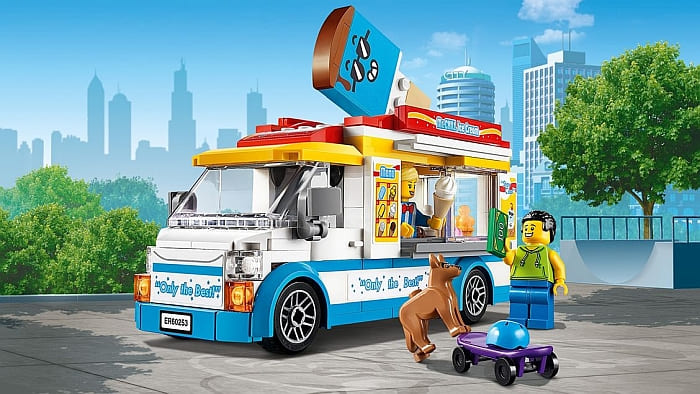 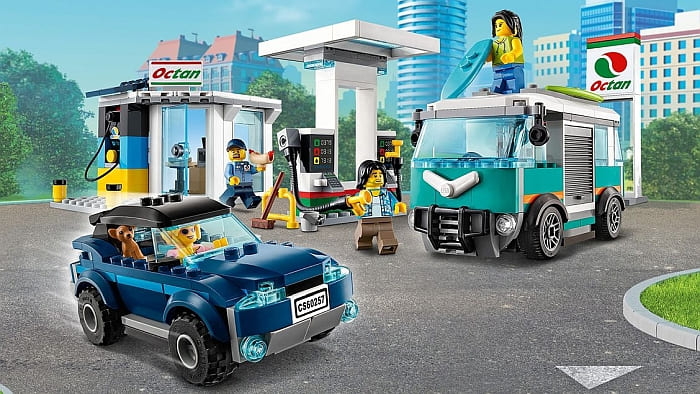 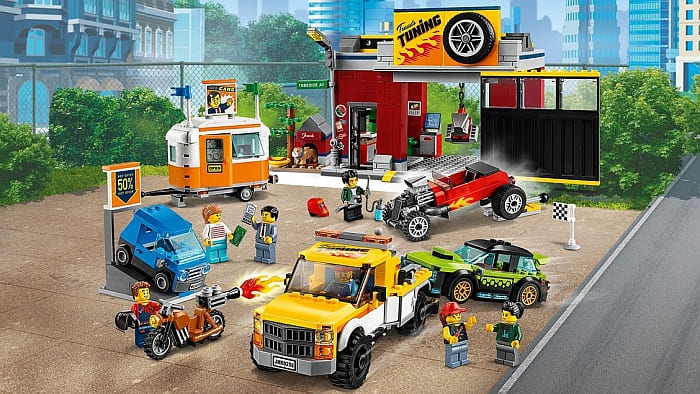 The #60253 LEGO City Ice-Cream Truck is a basic but very good design. The size, colors, and decorations fit right in with any LEGO City setup. The truck would also look good with the more adult-oriented LEGO Modular Buildings. The truck measures over 4″ (11cm) high, 5″ (15cm) long and 2″ (6cm) wide, so there is plenty of room for the ice-cream lady to drive the truck and serve customers. Below is the full review of the set by JANGBRiCKS, along with another recently released set that’s quite popular; the #60267 LEGO City Safari Off-Roader (I don’t like this set as much as it’s using so many stickers.)

The #60257 LEGO City Service Station features an Octan E charging point and gas pump, plus an SUV, a camper van with surfboards, four minifigs, and a dog. The gas pump can be incorporated into a larger city layout, while the service station could be used as a starter for a larger building. The SUV is a fine basic vehicle to run on LEGO city roads, and the camper van is basically an unlicensed VW bus that looks very cute. Watch the video-review below for more details.

The #60258 LEGO City Tuning Workshop is the set that adult LEGO fans have been the most excited about. It comes with a well-detailed and decently built-up garage and car dealership combo with a nice color-scheme. You wouldn’t even have to add too much to it to make it realistic. In addition, the set features a whole array of vehicles; a great looking tow truck, a basic car in lime-green, an awesome hot rod, a cute blue smart-car that LEGO first introduced as Emmet’s car in The LEGO Movie, and a camping trailer (my favorite!). Oh, and you also get a rocket-powered motorbike in an unusual color, plus seven minifigs. This is a great starter set for a city setup, or could be added to an existing layout. The set is not cheap, but I feel it’s worth the price. You can watch the video-review below for more details.

All three of these sets are solid offerings by the LEGO City design team for both kids and adult builders. The #60258 LEGO City Tuning Workshop is an especially great set with a solid selection of well-designed vehicles. The other two sets are also interesting additions to a city display. Unfortunately, LEGO City sets tend to be on the expensive side. As you can hear from JANG’s reviews, each set is overpriced by about $5-$10, so if you can get them cheaper at a retailer, or wait for a discount, Double VIP Points, or get some freebies with your order that would be the best option. If you are interested to check them out, all three sets (along with other new LEGO City sets) are available at the LEGO City section of the Online LEGO Shop.

What do you think? How do you like these three 2020 LEGO City sets? Do you have any of them already? And are there any other new LEGO City sets that you really like? Feel free to share your thoughts and discuss in the comment section below!