If you’re lucky enough to visit the LEGO House in Billund, Denmark, one of the perks is that you can purchase a LEGO House exclusive set that’s not available anywhere else. These sets have been popular with visitors to the LEGO House as well as collectors who are looking for unique, limited-release sets. A couple of nice sets in this collection have been the #4000026 LEGO House Tree of Creativity, and the #40366 LEGO House Dinosaurs – both sets depicting mini versions of some of the displays. 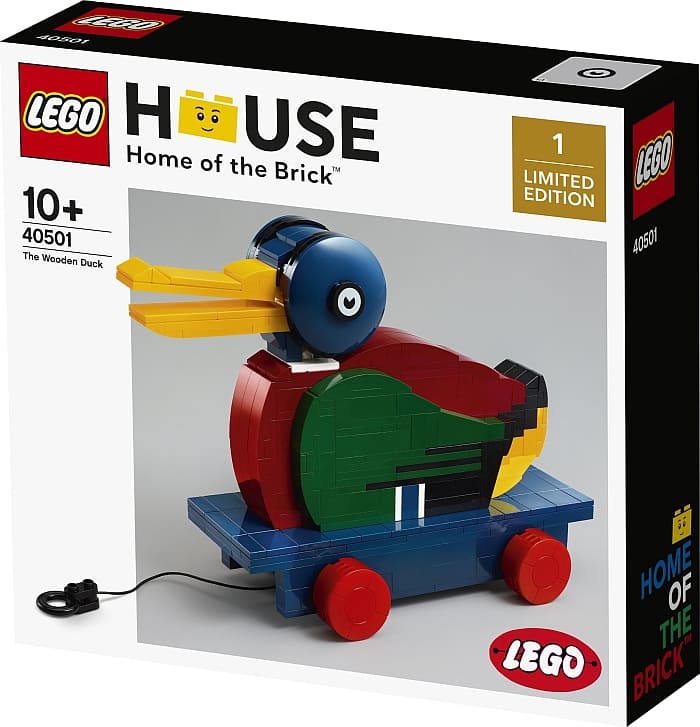 LEGO recently announced that they are launching a new exclusive series of LEGO House sets, based on LEGO’s history, starting with the #40501 LEGO House Limited Edition Wooden Duck. Below is the press-release with all the information you need to know about this historically significant creature. 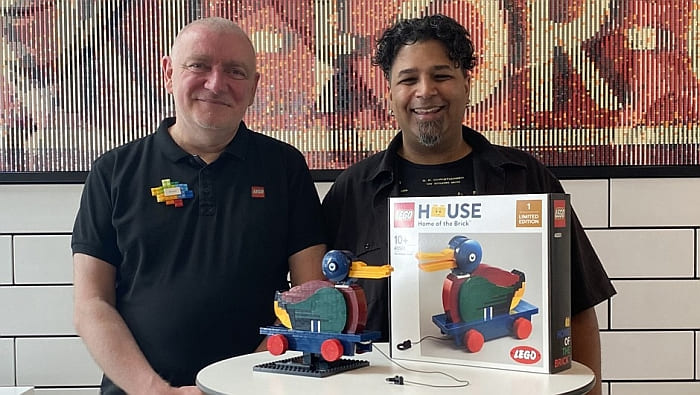 Stuart Harris and Jme Wheeler are the designers behind the new exclusive LEGO House product.

The LEGO House is now introducing a new series called: The LEGO House Limited Editions. The #40501 LEGO Wooden Duck is the first in this exclusive range of collectable products celebrating key moments in LEGO history. The original wooden duck is one of the most iconic features in LEGO’s history, and you can find the wooden duck replicated in LEGO bricks many places throughout the LEGO House – in the Tree of Creativity, in World Explorer, and even in the Red Zone.

The story behind the LEGO duck is that more than 100 years ago, 24-year-old Master Carpenter Ole Kirk Kristiansen bought a wood workshop in the tiny town of Billund, Denmark. From the very first toys coming out of Ole Kirk’s workshop, the dedication to quality and functionality was obvious. The design and the carving, sanding, and painting of each piece of toy was done to perfection because Ole Kirk was convinced that children deserved toys of high quality, made of the finest materials, so that they will last for many years of play. In an interview from 1982, Ole Kirk’s son, Godtfred Kirk, shared the following story about his father’s focus on quality:

Working in his father’s workshop as a boy, Godtfred Kirk was laying the finishing touches on a consignment of wooden LEGO ducks. This meant applying coats of varnish, and finally bringing the boxes with the finished toy ducks to the train station for dispatch. Back at the workshop, Godtfred proudly announces to his father that he has done something really clever and saved the company money. “How did you manage that?” asks Ole Kirk. “I gave the ducks just two coats of varnish, not three as we usually do,” was Godtfred Kirk’s answer. Back comes his father’s prompt response: “You will immediately fetch those ducks back, give them the last coat of varnish, pack them and return them to the station! And you will do it on your own – even if it takes you all night!”

“That taught me a lesson about quality,” Godtfred Kirk recalled and continued to explain how he then carved out wooden signs with his father’s motto “Only the best is good enough” to hang on the walls of the workshop to remind himself and the rest of the employees never to compromise on the quality of a LEGO product. Throughout his life, Godtfred Kirk remembers his father’s words and to this day, “Only the best is good enough” – because children deserve the best. Here are some facts about the original duck:

The #40501 LEGO House Limited Edition Wooden Duck is a lovely and accurate recreation of this iconic item from LEGO’s history, and also reminds us of the founder’s strong belief in quality. The box is the flip-up-lid kind, so it’s much nicer than regular LEGO boxes. The instructions are also higher than normal quality, with stories and pictures from LEGO’s history. 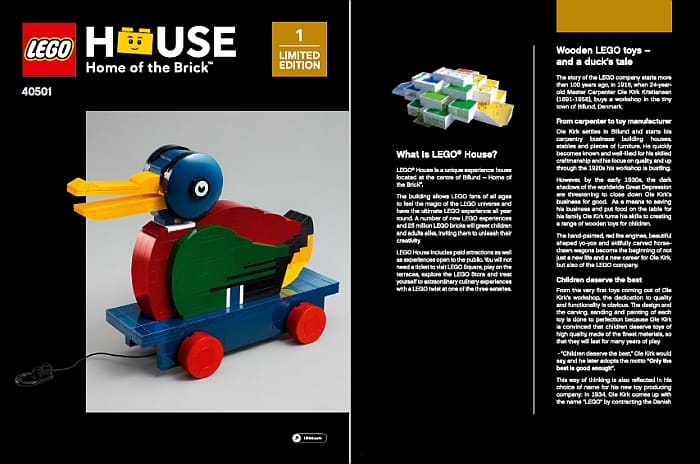 As far as the set, I really like the colors, especially the addition of the bit of yellow and bright-light-orange at the back, as well as the stripes on the wings. This set is definitely catering to long-time LEGO fans and collectors, but it’s sturdy enough for play as well, so a new generation of children can play with the duck… that turned to wood… then turned to plastic…

In the video below, Balazs from RacingBrick will show you the set in more detail, including the working mechanism of the beaks opening and closing as the duck is pulled along (with a satisfying clapping sound).

What do you think? How do you like the idea of LEGO releasing iconic memorabilia from their history? And what do you think of the LEGO House Limited Edition Wooden Duck? Feel free to share your thoughts and discuss in the comment section below!