BrotherhoodWorkshop is Back with New Brickfilms!

by Thita (admin) on August 6, 2020
in Featured LEGO Creations

If you have been a reader here for a while, you might remember that some years back we regularly featured LEGO stop-motion animation videos by Kevin Ulrich, who runs the YouTube channel, the BrotherhoodWorkshop. Kevin’s videos are funny and creative, using many innovative brickfilming techniques. Kevin hasn’t been posting as much on his channel as he used to, but this is because he has been working with LEGO directly in the past five years, making official LEGO animations. 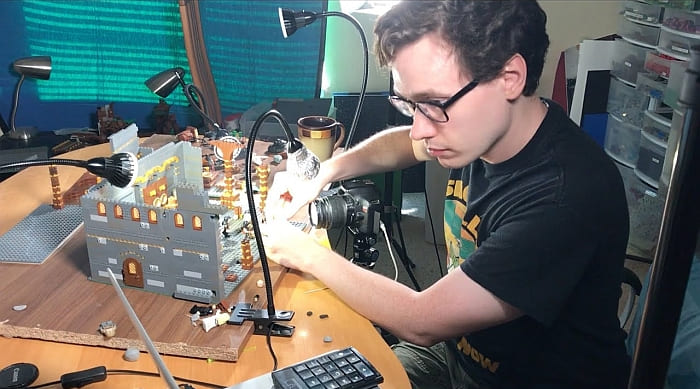 However, due to the pandemic, Kevin’s workload lightened, which gave him the opportunity to go back to his roots and start posting more LEGO animations on his YouTube channel. Kevin is particularly fond of The Lord of the Rings films, and many of his videos are parodies of scenes from the movies. Kevin also openly shares his tips and tricks in behind-the-scenes videos. These provide invaluable information for those who want to give brickfilming a try.

Below, I have included Kevin’s most recent brickfilm, titled, “Take the Wizard’s Staff!” – A Lord of the Rings Parody. It’s full of whit, humor, and direct references to scenes from the original film where Gandalf, Aragorn, Legolas, and Gimli first arrive in the capital city of Rohan to meet with King Théoden. I have also included several other short but fun Lord of the Rings parodies that Kevin recently posted.

Kevin’s tutorials are always super interesting, so in the player below I have added three of his recently posted behind-the-scenes videos. The first one is about lighting and angles, the second is about the gear Kevin is using for his videos, and the third is about filming tiny motions and creating effective and efficient fire effects.

I’m happy to see that Kevin is back in action with more brickfilms and tutorials. His videos always brighten up my day! And I also hope that he can continue working with LEGO in the future. What about you? How did you like the videos? Feel free to share your thoughts in the comment section below!

Next post: Update from LEGO About Coming Soon Sets