LEGO is offering two sets with Double VIP Points this month. Both are brand new sets from the LEGO Marvel Avengers collection. Interestingly, both of these sets feature the Avengers Tower; one for young builders with simple building techniques, and the other for older kids with more advanced details. Let’s take a closer look! 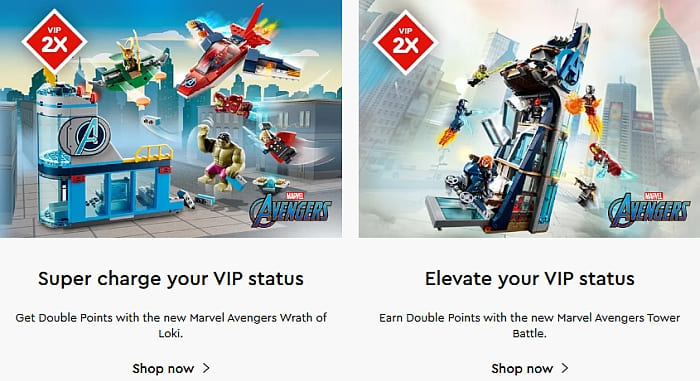 The #76152 LEGO Marvel Avengers Wrath of Loki is a LEGO Juniors (now called LEGO 4+) set meant for children who are just starting out with LEGO, or transitioning over from DUPLO to regular LEGO sets. However, Juniors sets are not just for kids! The minifigs are often exclusive and all the decorations are printed, which makes them interesting for collectors and those who are looking for unique printed elements. 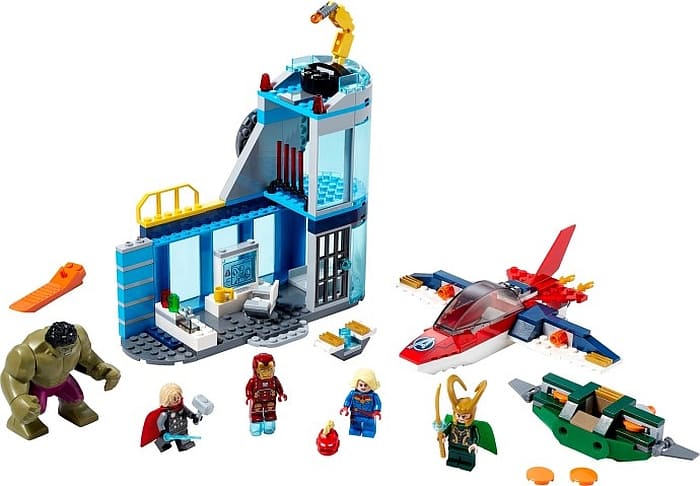 Besides the minifigs, the set also includes a slice of the Avengers Tower, a small Quinjet, and Loki’s glider. As this is a 4+ set, the building instructions are very simple, and the building and vehicles include special one-piece Starter Bricks that allows kids to build easily and make the constructions very sturdy for play.

The color selection is quite nice with dark-azure, dark-blue, and translucent-light-blue for the building, and an assortment of useful colors for the vehicles. Three of the most noteworthy pieces are printed elements exclusive to this set: the flat-silver 6×8- oval tile with the Avengers logo pattern, the red 4×4 wedge with the Avengers logo pattern (from the Quinjet), and the 1x4x3 translucent windowpane featuring a video screen with Loki and a warning sign. There are a couple of other printed pieces as well (keyboard and control board), but those are not unique to this set. 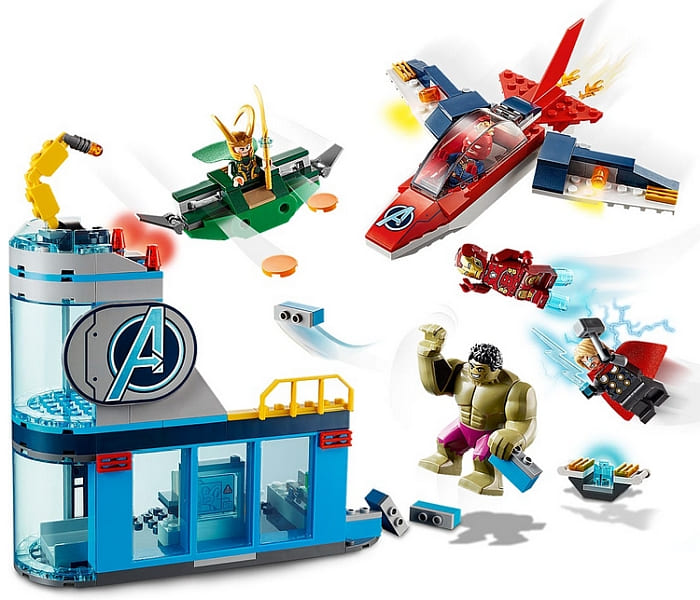 As you can see, the set has many positives going for it. The not-so-positive part is the price. The set is $59.99 for 223 pieces, which means a whopping 27 cents per piece. LEGO Juniors sets are always on the expensive side due to the large Starter Bricks, larger elements in general, and printed pieces, but even with all the unique parts and minifigs, I feel this set is overpriced by about $10-$15. You can either wait for a sale, or Double VIP Points basically give you a 10% discount, which is something. If you’re interested, you can find the set at the LEGO Marvel Super Heroes section of the Online LEGO Shop. 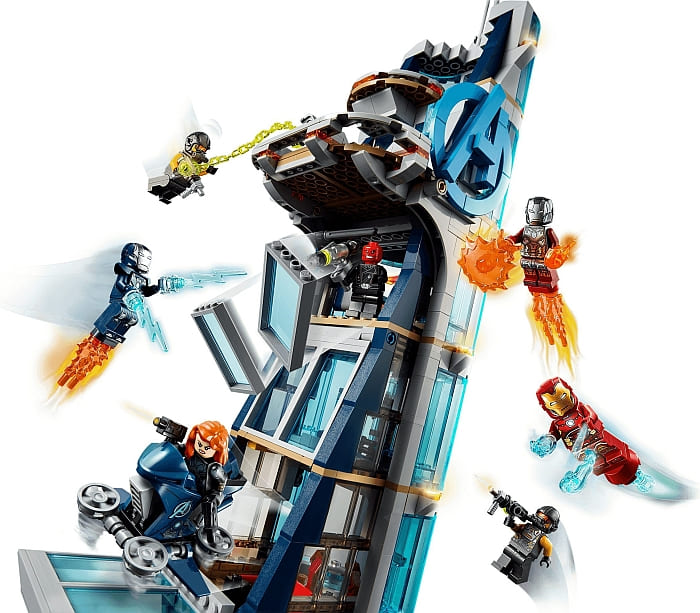 Now, let’s take a look at the other set with Double VIP Points; the #76166 LEGO Marvel Avengers Tower Battle. This set features a fully equipped 17” (44cm) high building with 5 floors and 7 feature-packed rooms. Rooms include Black Widow’s Sky Cycle garage, the Arc Reactor room, the Armory room, a tech lab, a jail, and two balconies (the jail can blast open, and one of the balconies is collapsible). 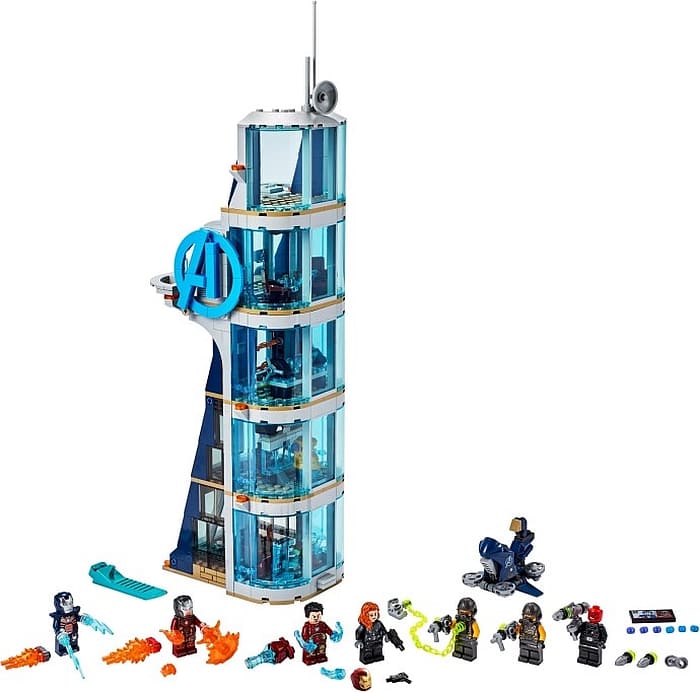 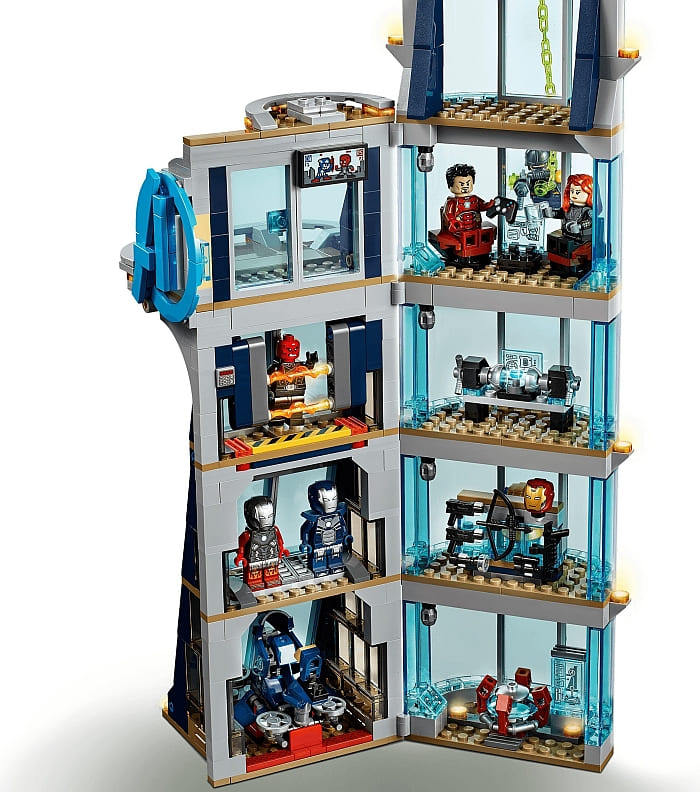 The set comes with seven minifigs in total. Three of the minifigs are three different versions of Iron Man; with regular armor that also appears in one other set, and Blazer and Tazer armors that are unique to this set. The other four minifigs are Red Skull (exclusive), Black Widow (not exclusive), and two AIM Agents that appeared in other sets as well.

As usual with such sets, the decorations are all stickers, but with only 10 of them, it’s not bad. LEGO designers did a great job achieving all the other details by brick-built techniques. I especially like the brick-built logo. And as usual with Marvel sets, there are tons of fun accessories like the various blast and fire pieces. Overall, this set looks like a lot of fun. Taller but thinner than the #76038 LEGO Marvel Avengers Tower from 2015. It would be interesting to combine the two. The minifig-selection and play features are also good, and the price of $89.99 (685 pieces, 13 cents price/piece) is not too bad either. Especially with Double VIP Points. Below, I have included JANGBRiCK’s review so you can see the set in more detail, and if you want to check it out, it’s available at the LEGO Marvel Super Heroes section of the Online LEGO Shop.

Besides these two sets, there are other new Marvel sets that were recently released. This includes the #76153 LEGO Marvel Avengers Helicarrier, the #76164 LEGO Marvel Iron Man Hulkbuster vs. A.I.M Agent, and the #76165 LEGO Marvel Iron Man Buildable Helmet. And of course, we also got the awesome new #31199 LEGO Marvel Studios Iron Man Mosaic we talked about the other day. You can find all the new sets at the LEGO Marvel Super Heroes section of the Online LEGO Shop.

What do you think? Are you excited about any of the new LEGO Marvel sets? Are you planning to get any of them? Or did you get some of them already? Feel free to share your thoughts and own reviews in the comment section below!

Next post: Can Monkie Kid Give Us Sets as Great as Ninjago City?