As we discussed previously, the four LEGO Wall Art pieces that we talked about in Collectible Wall Art Building Kits for Adults press-release are now available in most countries except for the US (where only the LEGO Art Marvel Studios Iron Man is available and the rest will be released on September 1st). The series features mosaics of Marvel and Star Wars characters and famous entertainers, each with alternate builds and combined builds. 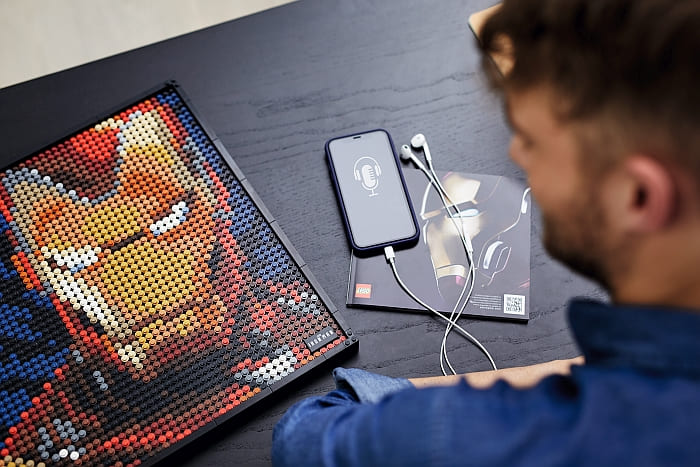 These sets are marketed to adults who aren’t necessarily LEGO fans (yet) as immersive experiences that combine art, design, creativity, and relaxation. Thus, they aren’t just including standard LEGO pieces for building a model, but also high-end coffee table style instructions, and even accompanying soundtracks. These soundtracks are about an hour and a half long and you can listen to them while you’re building. If you are curious to check out the soundtracks even without having the sets, you can listen to them by visiting LEGO.com/Themes/Art/, select one of the four sets, then scroll down to listen to the soundtrack. One of the four soundtracks, the LEGO Art Marvel Studios Iron Man, is also available in video format. Here is the intro to the video, and you can watch it below.

LISTEN, BUILD, RELAX… Explore the journey of genius playboy Tony Stark in a unique soundtrack accompanying the #31199 LEGO Art Marvel Studios Iron Man set. You’ll hear from experts and people who played a big part in creating the Marvel Comic Book Universe, and the LEGO designers who brought Iron Man to life in this canvas wall art set. LEGO art is a creative, fun, and immersive building experience that lets you recreate different versions of some of the most highly recognized works of pop art. Put on your headphones, hear stories about your favorite heroes, and watch your own mosaic art masterpiece come together, tile by tile. Special thanks to: Roy Thomas, former Marvel Editor in Chief and in the Will Eisner Award Hall of Fame. Tom Brevoort, Executive Editor in 2007 and Senior Vice President of Publishing at Marvel. Alex Grand, Marvel expert and host of “Comic Book Historians podcast”. Maggie Thompson, Marvel expert and long-time editor of “Comics Buyer’s Guide”. Kitt Kossmann, LEGO Art Senior Designer and Christopher Stamp, LEGO Design Lead.

What do you think? How do you like the LEGO Art sets? Which one is your favorite? Are you planning to get any of them? And how do you like the soundtracks? Feel free to share your thoughts and discuss in the comment section below!