Repurposing the LEGO Hidden Side Buildings

The LEGO Hidden Side theme has been a fantastic resource of unique elements and minifigs, as well as interesting buildings and vehicles. I recently built the #70422 LEGO Hidden Side Shrimp Shack, and was very impressed by both the color-scheme and the details. It’s a perfect building for the seedy part of town, and I have even seen sections of it incorporated into custom LEGO Modular Buildings like the modified #10260 LEGO Modular Downtown Diner by LEGO fan Dennis Ørholm Kvist (see below). The diner sign with neon lights (represented by translucent-red modified tiles) and the brick-built shrimp is particularly useful. And the commercial kitchen inside has some really great details as well. 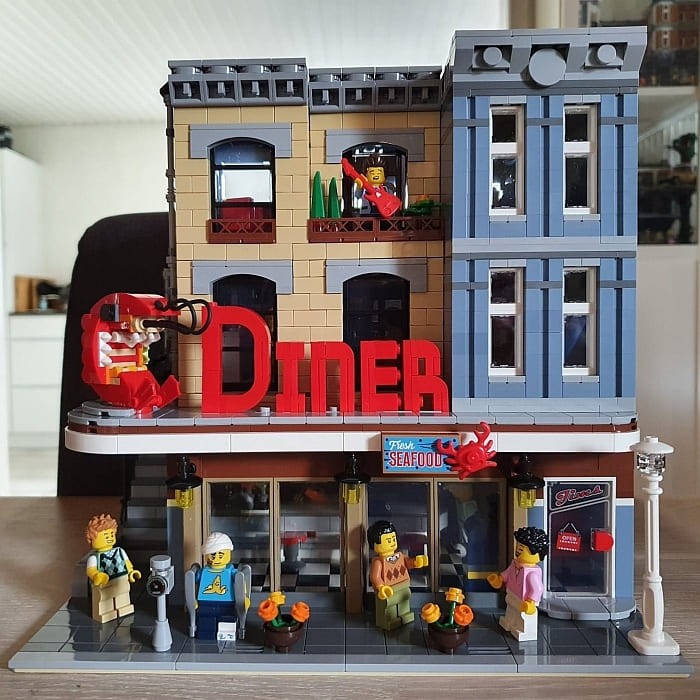 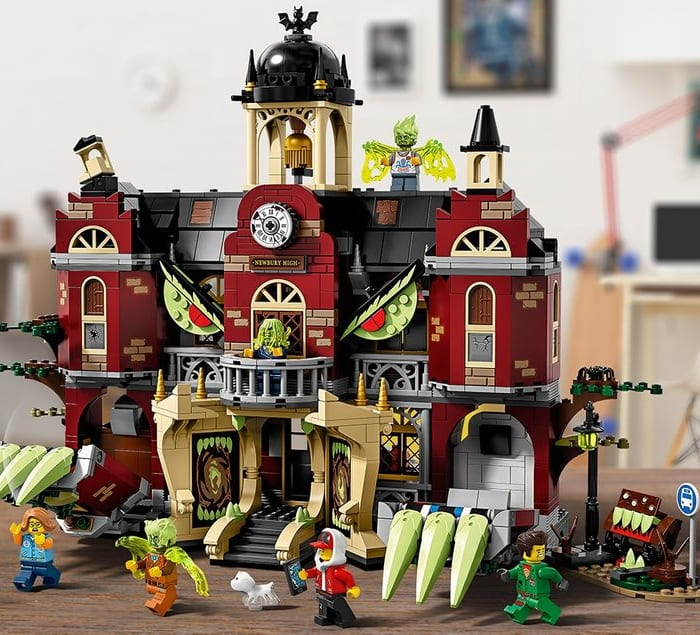 The #70425 LEGO Hidden Side Newbury Haunted High School is packed with delightful play-features, but behind them all is a great looking building that could be made into a traditional school, town hall, church, etc. You can even find instructions for a custom LEGO Modular Building (but still haunted) version of it on Rebrickable. 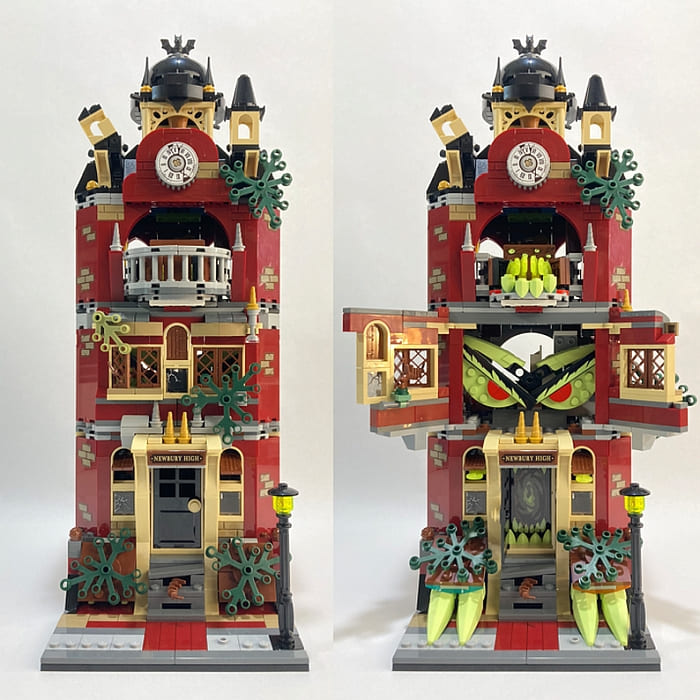 #70425 LEGO Hidden Side Newbury Abandoned Prison is a bit skeletal, but it does have some details that could be used for a larger structure. The color-scheme is dark and gloomy, and perfect for an old prison. And I love that heavy door! Again, you could incorporate the set as is into your city and then just build a fence all the way around, or you could take sections and ideas from the set to build your own thing. 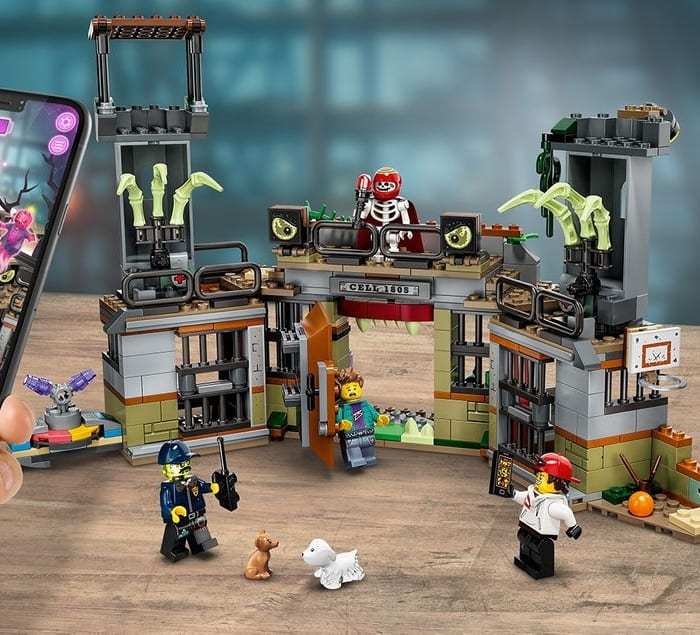 #70427 LEGO Hidden Side Mystery Castle is different as it’s a castle and not some old city building. It’s a good looking debilitated castle though, so you can reuse it as an old castle in your historic or fantasy dioramas. Like the high school, the castle also has many interactive play-features to turn it from spooky to even more spooky. But what’s really outstanding about this set is the parts-selection. Black tower roofs, light-gray fence pieces of all kinds, those intricately detailed arches are all highly desirable parts. To give you some concrete examples, the 2x4x4 cone shaped tower roof in black is exclusive to this set, while the larger 6x8x9 tower roof only appeared in black in two other sets. This is only the second time we get the 3x6x5 ornamented arch brick in light-gray. The other set is the #70425 LEGO Hidden Side Newbury Haunted High School, and you get two in each. Two other pieces that only appear in light-gray in the #70425 LEGO Hidden Side Newbury Haunted High School and the #70427 LEGO Hidden Side Mystery Castle are the 1x4x2 ornamental fence and the 4x4x2 quarter round spindled fence. And interestingly, the otherwise common 1x4x1 fence that has been around since 1976 only appeared in light-gray in four other sets, and thus still considered rare. Getting these building elements in light-gray is incredibly useful for those who like to work with architectural details. 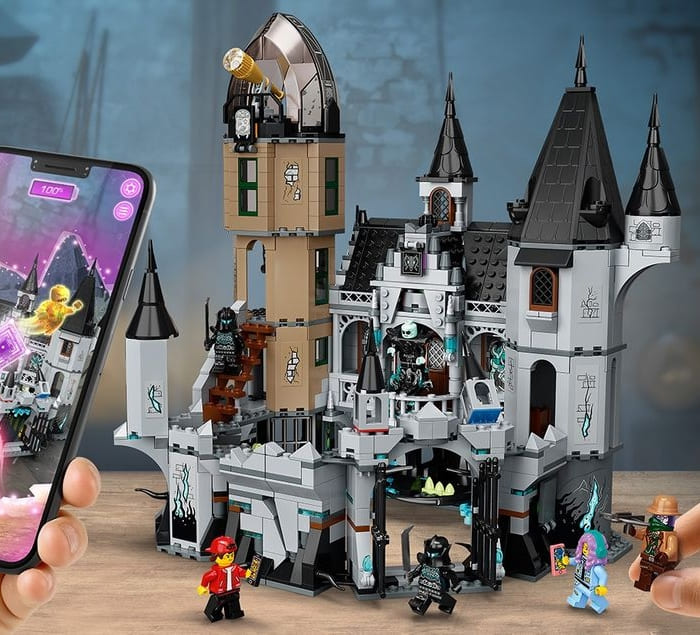 The bottom line is; don’t dismiss a set because it comes from a theme you’re not interested in. Nice looking buildings are especially rare but often contain a large number of useful elements, colors, and interesting building techniques. The target audience for the LEGO Hidden Side sets and the LEGO Hidden Side app is young kids. However, after stripping away the play-features and the gimmicks provided by the app, they are actually really solid models that older LEGO fans can also find useful. If you want to take a look at the sets we discussed above, visit the LEGO Hidden Side section of the Online LEGO Shop. 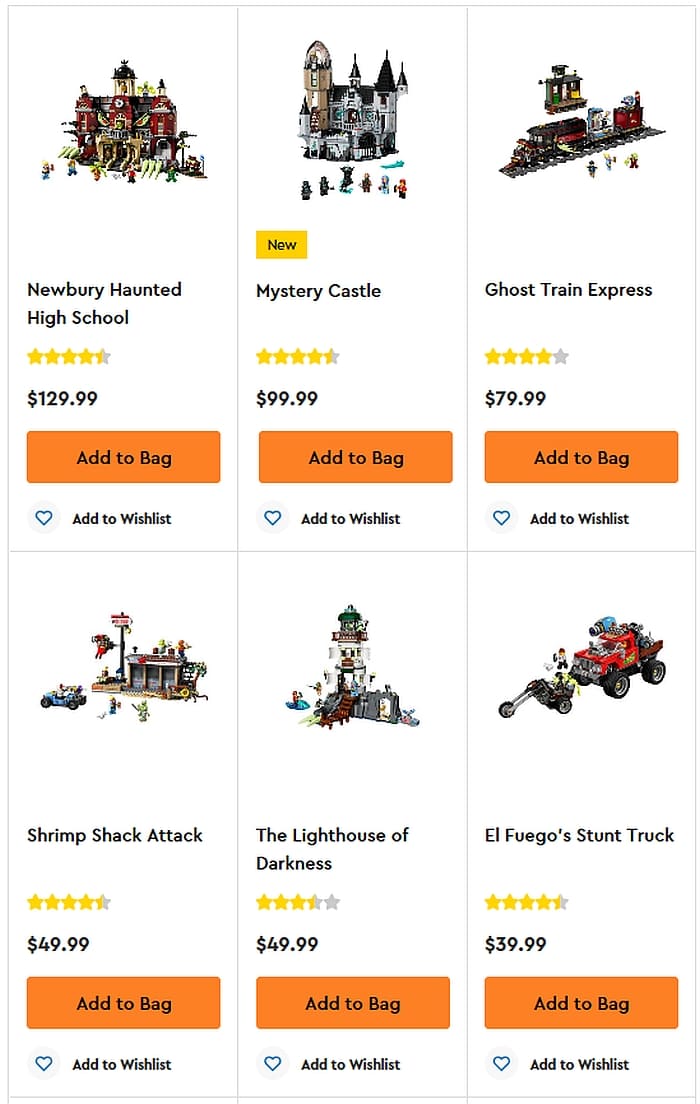 What do you think? Are there any buildings that you repurposed to fit your LEGO city or turned into a LEGO Modular Building? Feel free to share and discuss in the comment section below!

Next post: Update on the Availability of LEGO Braille Bricks