I must start off with two important points. First, depending on where you live, this set might be named The Mandalorian Prisoner Transport. This is primarily due to the fact that there was trouble securing the Razor Crest name in certain regions via trademark. 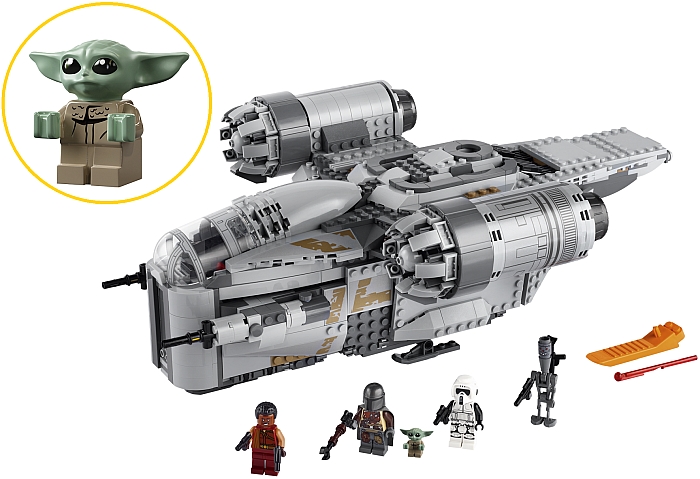 The Second important point I want to make is that I typically don’t build much in the way of Star Wars. Don’t get me wrong, I love the Star Wars franchise, but if I would get into LEGO Star Wars, I would probably have very little money to spend on other LEGO sets. So, apart from the massive #75192 LEGO Star Wars Ultimate Collector Series Millennium Falcon, the big #75187 LEGO Star Wars BB-8 model, and a whole slew of mini-scaled ships, I’ve built very few Star Wars sets. 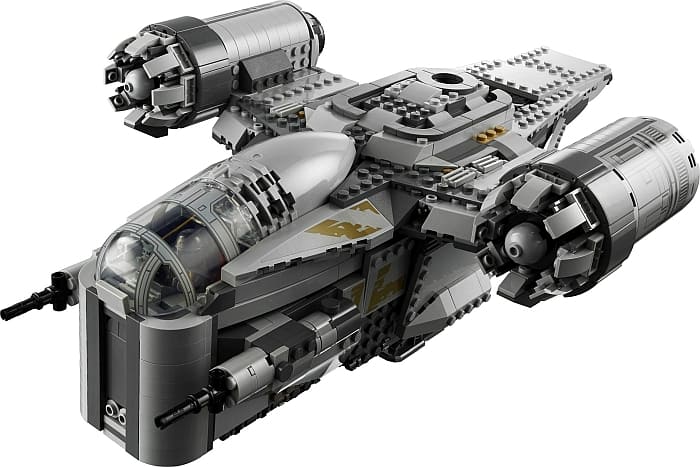 But like many who subscribe to Disney Plus and subsequently watches The Mandalorian series, I knew when the #75292 LEGO Star Wars The Razor Crest was announced that I was going to buy it. Truth be told, I’m partial to Mandalorians in the Star Wars universe. Given the choice, I’d pick a Mando over a force-user. The long and short of it is, I have a lot of hype for this series and the set.

Add in the fact that this is the first set released to feature the child in minifigure scale, and it becomes hard to be objective about this model. Do I like it? Yes. Would I recommend it? Absolutely yes. Can I give an accurate critique of this set compared to other Star Wars ships? Not really, since as I said, I don’t build Star Wars sets that often. For that type of analysis, you may want to check out the reviews of experienced Star Wars builders. In the video below, I have included my overall thoughts on the set, and below that we will talk about the interesting building techniques found in the set. So, let’s get started!

In the Mandalorian TV show, many scenes happen on this ship. Trouble is, this is not a massive ship compared to others found in the Star Wars universe. So how does one go about creating the maximum amount of play room while still maintaining the stability you need for a ship you can fly around? Simple, by having multiple platforms you can play on. 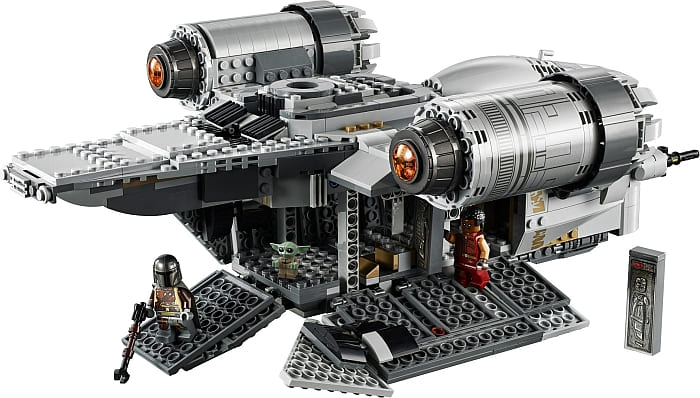 Many of the large scaled LEGO vehicles I’ve put together feature a LEGO Technic frame that provides easy mobility and a strong building surface. Sometimes this layer is doubled on truly massive builds to provide additional shaping or stability. The #75192 LEGO Star Wars Ultimate Collector Series Millennium Falcon and the #71042 LEGO Star Wars Pirates of the Caribbean Silent Mary are two examples of this dual-layer structural platform technique.

However, the Razor Crest goes about it differently. I imagine that this is a technique used in other Star Wars ships as well. LEGO designers build one layer, then separate a second layer with some long beams. This, in short, creates a multi-floor design that is super sturdy, yet still large enough to fit a hand inside. 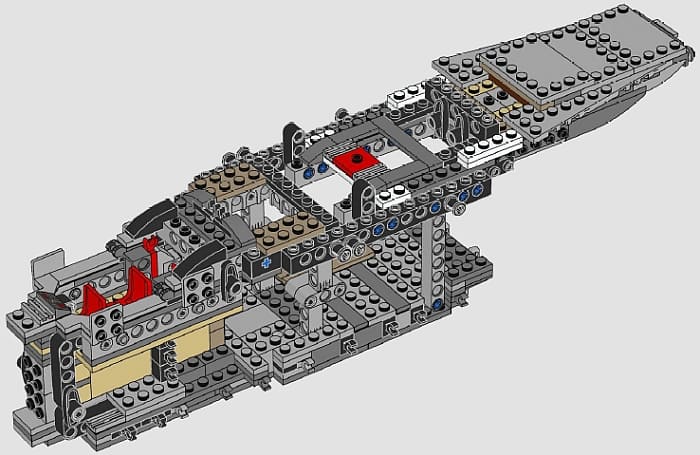 The interesting thing is that the two levels don’t have to be identical. For example, in the Razor Crest, the top layer sticks out a lot farther than the bottom. This does mean you will want to keep an eye out for where the weight of the model sits. In this case, LEGO designers frontloaded the ship with a denser concentration of parts giving it more weight so it wouldn’t tip backwards if left unattended.

The other interesting point about this technique is that if you just use Technic beams, it’s possible to have the second layer tilted at any angle you wish. That wasn’t done here, but is worth noting in case you have the need.

I tend to build things that are based on what we find in the real world. Essentially, the things I recreate have to deal with a planet’s gravity, and their designs reflect this in their structure. Spaceships aren’t necessarily built for landing on a planet. Just look at the Death Star or any Star Destroyer and you can tell that they weren’t designed to ever land anywhere.

In order to compensate for this, you are forced to use techniques like the dual layer platform to not only achieve impossible dynamic vehicle structures, but also to be able to play with and display these models. Because we like it or not, we are on this planet, and even our most fantastical spaceships have to remain practical. So, the two major points you’ll need to work out is to make sure that the beams are secured both horizontally and vertically. Failure to do this may mean your model will naturally fold in on itself. And second, keep an eye out on where the weight of your model is. Structurally, it can look amazing, but that’d all be spoiled if it always tips over.

The only downside of using the multi-layer platform technique is that, even though it allows you to have extra layers, none of these layers are especially tall. You could potentially make the walls taller, but in the multi-layer technique, you’re limited by the types of beams or extensions you can use to separate the layers. 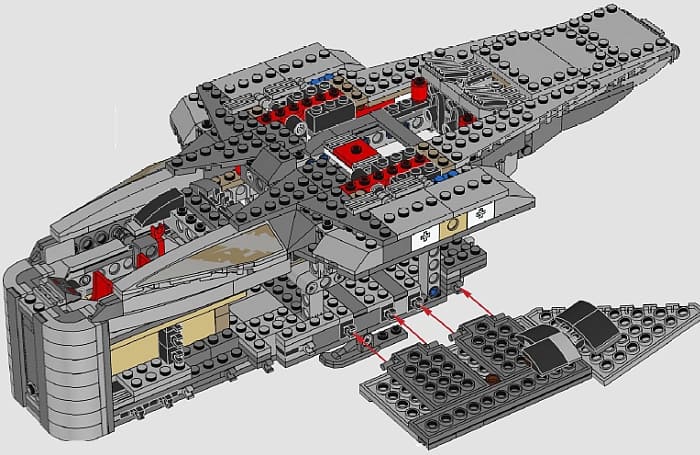 I was not sure how LEGO designers would overcome this obstacle for the lower level of the Razor Crest. Turns out, they made all the lower bulkheads fold out from the ship. Normally, a vehicle depends on its outer walls to hold itself together. However, the multi-platform technique handled all the major stability work. This meant the lower walls could be decorative.

Don’t think though that this is a way to solve all your tiny floor issues. The only reason why it works here is because you’re not dealing with a lot of depth. The low ceiling is still an issue to be dealt with. Additional accessibility is always handy. The problem is, the most accessible design is always open space. This is why we get some pretty complex models that slide and hinge open in addition to unfolding or having sections that can be lifted off completely. The idea is how to maintain stability while giving the most accessibility to open air as possible. 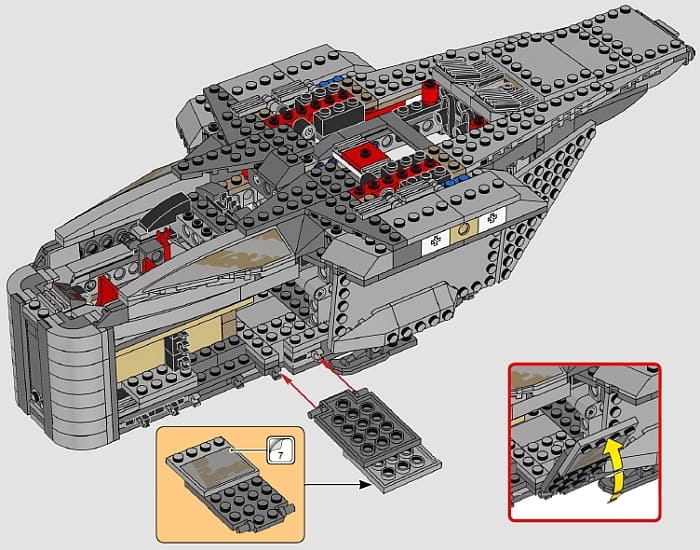 By being fairly narrow and accessible from two sides, the Razor Crest does an excellent job at promoting play. Plus, it can be folded up really quickly and it’s ready to fly. Of course, folding walls aren’t always an option. As stated before, you will need something else to provide a strong skeletal frame if you’re using this technique, since you won’t be relying on walls.

As for the hinging mechanism for the fold out, there are a few things to consider. First, the more points of contacts or hinges you use, the more stable a section will be. The back half of the ship uses six bar and clip connections on each side. 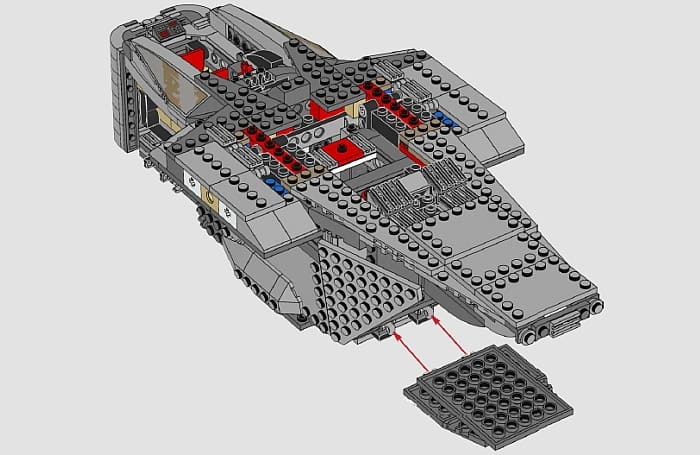 I should also mention that it is not necessary to fold the walls down like it is done in this set. However, over time, this will put less strain on the hinges compared to if they moved up. In general, it’s also a smarter design since the walls move towards the empty space. If they instead moved up into the ship or even sideways, you’d end up with crowding. Depending on what you build, try to aim to have the parts move towards empty space if what you need is more play room.

Depending on the vehicle you create, you may have structural demands that you’re not quite prepared for. Moderate-sized spacecrafts, for instance, really seem to thrive when they are structurally supported by an internal core, which is then built outward. This differs from a standard ground vehicle that will be given a sturdy base and be constructed upwards. Using a dual-platform inner-structure is the simplest way to understand how you might create a structural base that works for ship models.

Additionally, using this method of structural design means you’ll need to develop solutions for basic issues. In the case of this ship, it was displaying and playing with the lower level of the ship. By understanding what the dual-layer platforms offer structurally, you could see where you have room for a little design freedom. Normally, walls are an essential component to most things you make. However, if that stability is provided elsewhere, you can then experiment with alternate functionality, like having the walls fold down.

The long and short of it is, when your creations are on the more exotic side, prepare to think a little more creatively about your underlying base supports. Many times, we get caught up on the detail work of something we love only to find out it is completely impractical. Hopefully, these are a couple of tools you can use to bring to life your most imaginative creations! And if you haven’t checked it out yet, the Razor Crest is available at the LEGO Star Wars section of the Online LEGO Shop.

What do you think? How do you like the LEGO Star Wars The Razor Crest? And what do you think of the techniques we discussed here? Have you used either of them in your own builds? If you have the set already, are there any other interesting techniques that you found? Feel free to share and discuss in the comment section below!