LEGO Masters is Back & Now Casting for Season 2

The first season of the US version of the LEGO Master reality competition television series was so successful that a second season is already planned. The LEGO Masters competition was first held in the UK three years ago, and then it branched out to other countries like Germany, Australia, the United States, The Netherlands and Belgium, Sweden, Colombia, Chile, and Poland. Some of these countries already held one season, while others will have their first season next year. 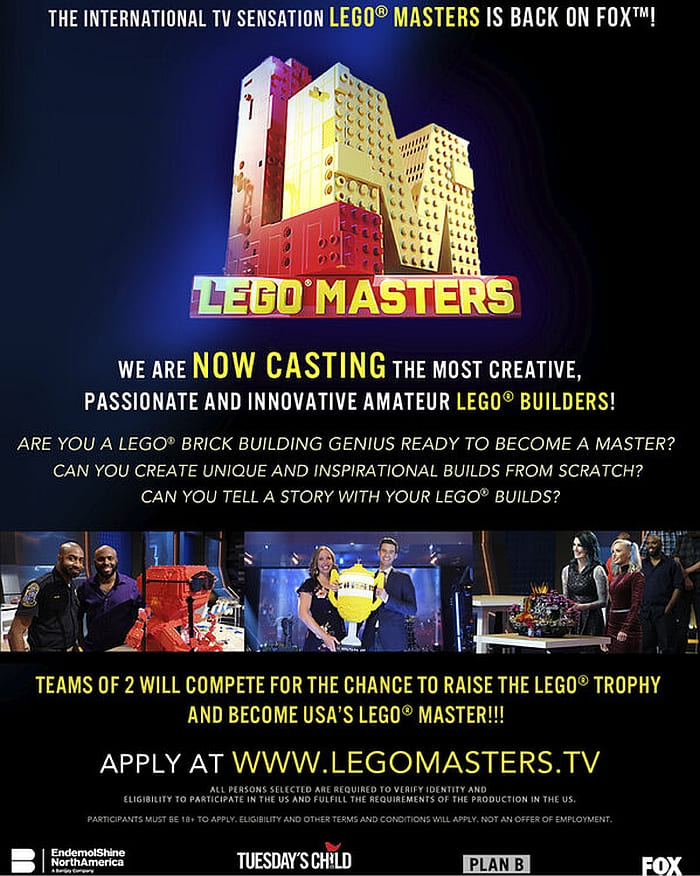 In case you haven’t watched the first season, LEGO Masters pits teams of two against each other in a LEGO building competition that lasts through ten episodes. In each episode, the teams get new challenges and a limited time period to finish a specific task. After the allotted time, the teams demonstrate their creation to the host and judges (in the first season the host was Will Arnett and the judges were Amy Corbett, a senior design manager at LEGO, and Jamie Berard, who oversees the LEGO Creator Expert and LEGO Architecture lines. In each episode, the judges name the winning team, and the losing team who is then eliminated from the competition. The team that ultimate wins receives a LEGO Masters trophy and $100,000.

The first season of LEGO Masters featured some well-known and less well-known names from the LEGO fan community. The competition was intense but great fun, and watching it was enjoyable too. I have even heard from LEGO fans who took up the challenges themselves as they were following the show (albeit at a smaller scale – the contestants had access to practically unlimited LEGO bricks). LEGO fan media also closely followed the competition and I particularly enjoyed the exit interviews with great insights from the competitors.

As I mentioned above, the US is already planning their second season, and currently there is a casting call for participants at LEGOMasters.tv. If you’re interested, please consider the following eligibility requirements to ensure that you and your proposed teammate are eligible to apply.

If you’re eligible base on the requirements above, then you can go to LEGOMasters.tv to apply. The questionnaire you need fill out is quite long with a few serious and many fun questions so the casting crew gets to know you better. Read through the form and fill it out carefully. After that, you just need to wait until they get back to you.

I anticipate that we will see some excellent builders in the second season of the show, just like we did in the first one. If you would like to watch or re-watch the first season, you can do so at Fox.com/LEGO-Masters.

What do you think? Did you watch the first season of LEGO Masters? How did you like it? Are you looking forward to the second season? And do you think about applying as a contestant yourself? Feel free to share your thoughts and discuss in the comment section below!