What ties together all these sets is the new road plates system. As we mentioned in Part 1 of this review series, the new road plates provide a modular system for building customized roads, and you can also use them in other applications where large building elements are needed. They come in 16×16 studs and 8×16 studs sizes, and are available in printed and unprinted versions. The top surface of the road plates is mostly smooth, but there are some strategically placed indentations with studs as connection points, and tubes on the bottom for further connections. We discussed the strengths of the new system, including its modularity and customization options, as well as its weaknesses like the flimsy connections between road plates, and the unsightly seams around the indentations (when filled with tiles). 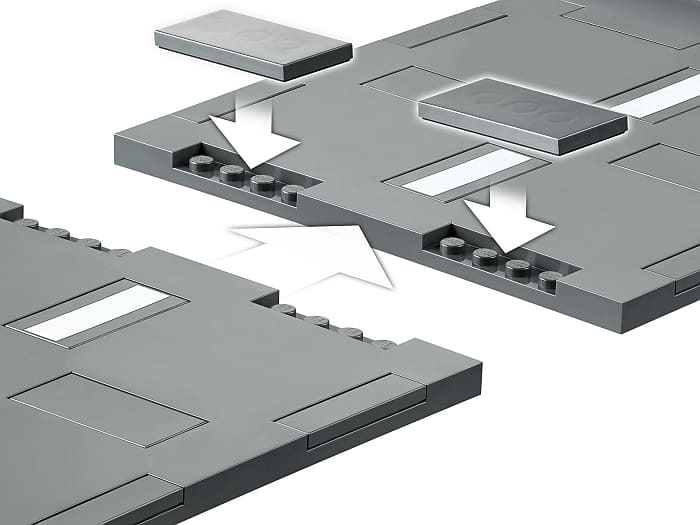 Now, let’s talk about the #60306 LEGO City Shopping Street! This is one of the larger sets in the new collection, and besides incorporating several of the new road plates, it also features the new glow-in-the-dark streetlights, new bike colors, and it is the only new LEGO City set with a bike lane! According to the official description, the set features a bakery, a bike shop, an outdoor training area, three bikes (one cargo bike, one mountain bike, and one traditional bike), a sports car, and a service truck with a cherry picker, plus six minifigures. The set also includes one printed 8×16 road plate, two unprinted 16×16 road plates, and tiles to add a bike lane (we will talk about this in detail below). When built, the LEGO City Shopping Street measures over 5 in. (13 cm) high, 16 in. (40 cm) wide, and 11 in. (28 cm) deep. The total piece count is 533, and the price is $79.99. It will be available on January 1st at the LEGO City section of the Online LEGO Shop. 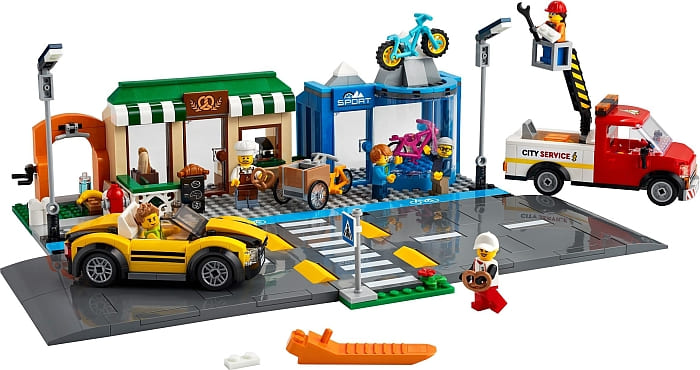 As this is a quite large set with many different components, it includes five building instructions. It would have been possible to combine them all into one booklet, but by having separate instructions, several kids can work on the set at the same time. The first instruction booklet features the yellow sports car, the second the street and the outdoor training area, the third the bakery, the fourth the bike shop, and the fifth the service truck. There is also a small sticker-sheet with fourteen stickers. They are mostly used for decorating the vehicles, but there are also a couple of stickers for the shop signs. 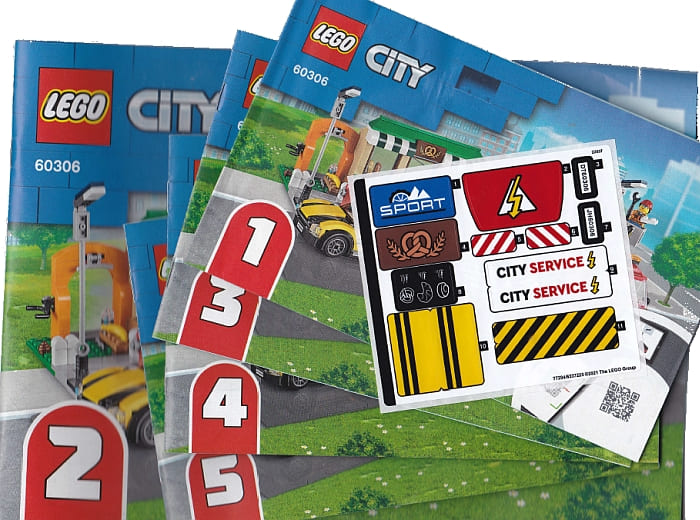 Both the bakery and bike shop have simple but nicely detailed facades and very nice color-schemes. The bakery has a small sitting area at the front, and a cleverly designed bike stand using a couple of hoop pieces and standard clips. The shop sign and menu are both stickers, but the round tile coins are a new printed piece. As the building is only four studs deep, there is not much on the inside; a couple of breads, pretzels, a coffee machine (but not a single coffee cup!), and a cash register with a new print. For kids, this setup is enough for play, but adult will probably want to make this shop bigger. 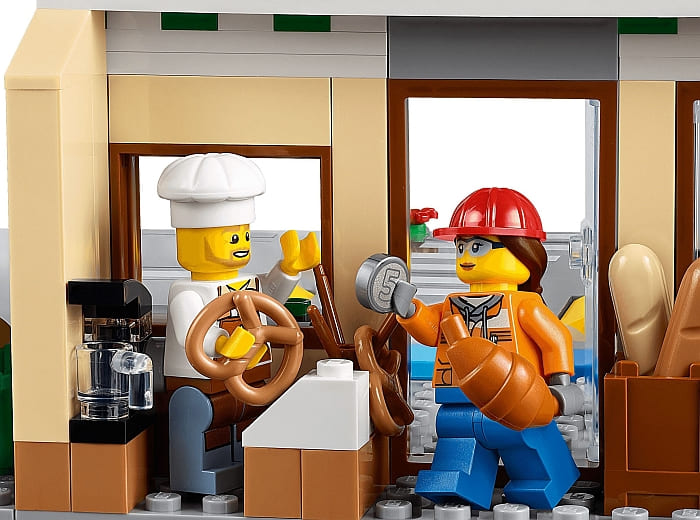 The bike shop has a blue and dark-azure color scheme with a bit of snowy mountain display over the roof and a printed shop sign. It has more space inside than the bakery due to the rounded shop window with a turntable to display bikes. There is also a display rack with a couple of bike helmets (magenta and dark-azure). The register screen is a new printed piece. The most exciting feature of the bike shop is that we get three different bikes, all in new colors. The standard bike comes in magenta, the mountain bike in medium-azure (with yellow wheels), and the cargo bike in bright-light-orange. This will make LEGO City fans and LEGO bike collectors very happy. 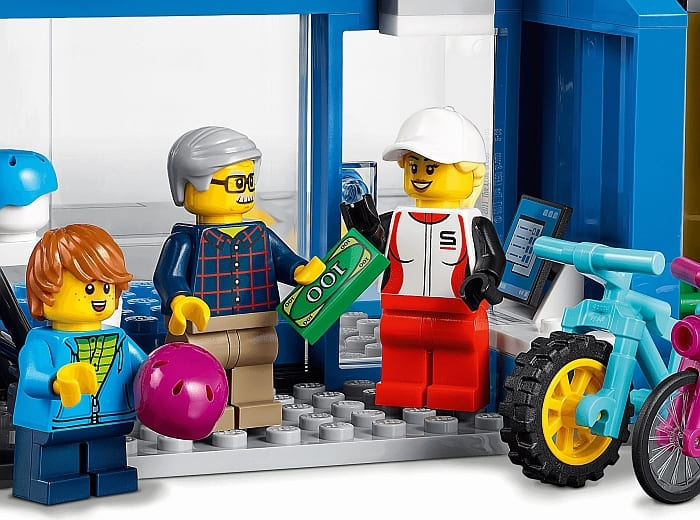 The small training area on the left of the bakery is basically just an orange arch with a pull-up bar and a dip-bar and a small bench. It doesn’t really add much to the setup, but like the splash of color it adds to the street. 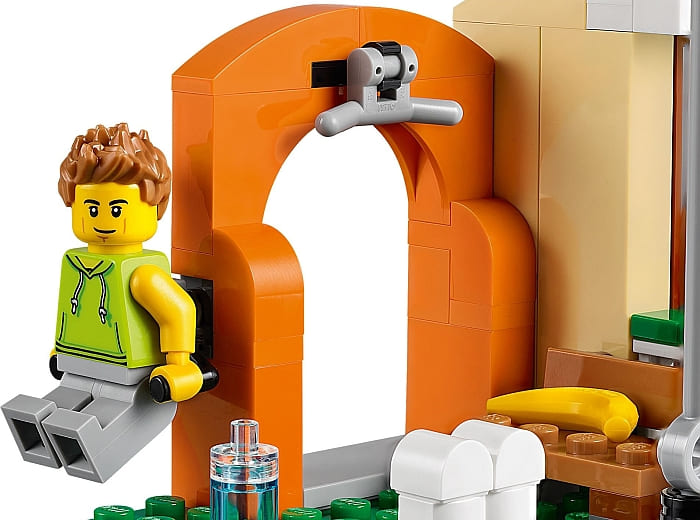 As we mentioned at the beginning, the set comes with two vehicles; a yellow sports car and a service truck with a cherry picker. Both vehicles have a nice design, and they look great with our without the stickers. Even though I’m happy with both vehicles, I find it strange that they were used in this set along with the new road plates. Both vehicles are six studs wide (and the wheel arches make them even wider), and they don’t fit very well on the narrow lanes of the new road plates. The four-stud wide pickup truck in the #60290 LEGO City Skate Park, and the four-stud wide family van in the #60291 LEGO City Family House are much better at demonstrating the new system. Even a combination of a four-stud wide vehicle and a six-stud wide service truck would have been better. The sports car looks enormous compared to the service truck as well as the road. 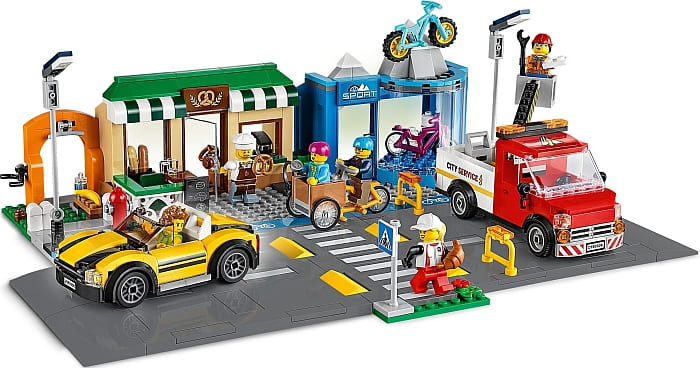 Also a hit and miss is the bike lane. This new system features dark-azure 2×6 tiles (you get four in the set) and 2×4 printed tiles (you get three). The bike lane looks very attractive when built, but it is too narrow. It can barely fit one bike, can’t fit the cargo bike, and there is no buffer zone between the bike lane and the narrow road with enormous cars zooming by. If you have more room in your layout, you can fix this issue by adding a solid one-stud wide white or yellow line between the road and the bike lane. Even with these issues and even if you don’t plan to use the new road tiles in your city, I do recommend the bike lane pieces. They really are pretty. 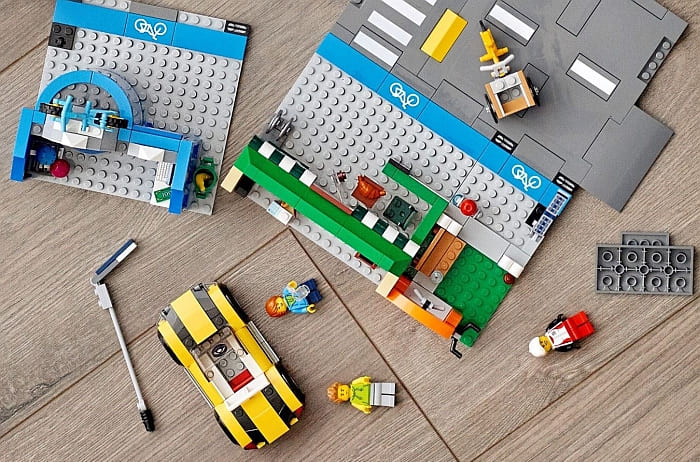 We talked about the road plates in detail in the previous reviews in this series, but there are some specific features in this set I wanted to mention. First of all, you get one printed 8×16 road plate, two 16×16 road plates, seven printed 2×4 tiles (with white line), 8 unprinted 2×4 tiles, and four yellow speed bumps. The road plates are connected to each other as well as to the shopping street with the tiles. As mentioned in the previous reviews, the connections are very flimsy, so make sure you build the set on a hard and flat surface otherwise you will get frustrated by the whole layout falling apart.

When you construct the road and you put the two vehicles on it, another issue becomes apparent. The vehicles aren’t just too wide for the road, they are also too wide for the speed bumps. Because the speed bumps are only four-stud wide, they can only slow down a four-stud wide vehicle. The service truck’s can completely avoid going over them, and the sports car gets scraped on the bottom. This makes me even more convinced that these vehicles are not a good fit for this set.

The street comes with a couple of the same streetlights with glow-in-the-dark elements as we have seen in the #60304 LEGO City Road Plates starter set. You also get two extra glow-in-the-dark 1×2 plates with the service truck, which is a nice touch. And you also get a printed street sign for the crosswalk.

In summary, there is a lot going for the #60306 LEGO City Shopping Street set; nice little shops that could be expanded or used as is, three different new bike colors, several of the new road plate elements, an exclusive bike lane, useful minifigs, and two vehicles that although don’t fit the set, they are still nice. As far as the price, $65-$70 would be more reasonable for what you get, but $80 is not totally outrageous (15 cents per piece). It just depends on how much you want it. If you are only interested in the road plates, the starter set is a better option. If you like the rest of what the shopping street has to offer, you might as well get that one. If you want to check out all the 2021 LEGO City sets, visit the LEGO City section of the Online LEGO Shop.

What do you think? How do you like the new LEGO City road plate system? Are you planning to give it a try? And how do you like the shopping street? Feel free to share your thoughts and discuss in the comment section below!