Ever wondered where’s the best place to see the most amazing LEGO MOCs (My Own Creation) by builders around the world? In the past, sites like MOCpages and Brickshelf offered LEGO fans a home to host their photos. Sadly, these have died a slow death. Now, social media sites such as Facebook and Instagram allow builders to connect with fans. And for builder-to-builder interaction, Flickr is the best place. 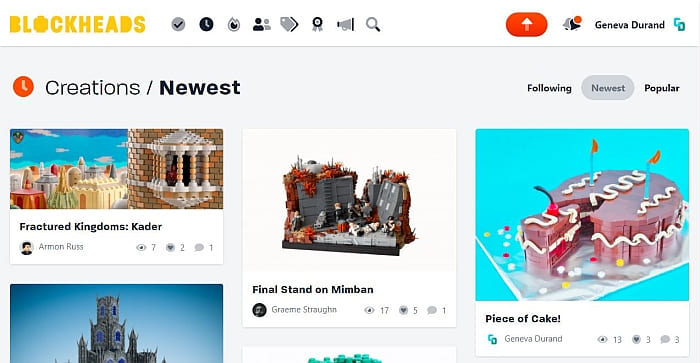 But these sites aren’t exclusively for LEGO, and a lot of their features are less than ideal for the LEGO fan community. This is where a new site, Blockheads.Builders, aims to find a niche. It’s a LEGO-only image hosting site, where fans and builders can interact with likes, views, and comments. I thought the best way to understand what Blockheads is about would be to talk to Galen Gidman, who’s put a lot of thought and work into getting this site up and running!

I think the biggest differentiator is that Blockheads is all LEGO, all the time. Flickr and Instagram are great platforms, but the LEGO community is just one of thousands of niches they have to support. In the grand scheme of things, it’s barely a blip on their radar. Not so with Blockheads. Every feature we create, every decision we make, it’s all about creating a better platform for the LEGO community.

While the core feature of Blockheads is photo sharing, we aim to become a lot more than that. It won’t be ready at launch, but development is already well under way to allow builders to host contests on Blockheads… but more on that later. Another feature we have in the pipeline will allow you to curate collections of content you like, à la Pinterest.

And while it’s not on the immediate roadmap, we have some really cool ideas for features to support LUGs (LEGO User Groups) as well.

All that to say, where Blockhead’s features overlap with the “big box photo sharing sites”, we aim to provide a comparable experience. But for things that are specific to the LEGO community, we can build features that non-LEGO oriented platforms never could.

What kind of LEGO fan will like Blockheads, and why should fans who aren’t MOCers take the time to visit Blockheads?

I think Blockheads has something for every LEGO fan. For MOCers or even builders who primarily stick to official sets, it’s obviously a great place to post and receive feedback on their creations. And for new fans that are just getting their feet wet, it’s a great starting spot to connect with the community and learn from some really talented pros.

But even if you don’t build much at all, Blockheads is a fantastic way to follow your favorite builders and curate a high quality stream of awesome LEGO content. And who knows — you might even be inspired to start building more yourself. 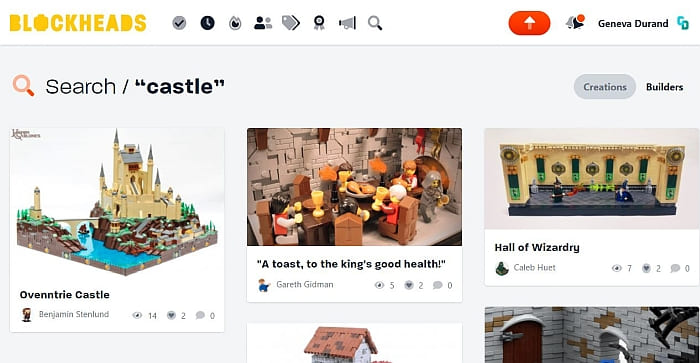 How does Blockheads fit in with LEGO forums like Eurobricks and Classic-Castle?

Clearly, these forums and others like them are awesome places for the LEGO community to gather, and Blockheads doesn’t aim to change that. What I think we’ve done, and will continue to do with Blockheads, is build a platform that’s very good at what it’s designed to do. From day one that’s primarily photo sharing, but with the upcoming addition of contests and our content curation features, we’re growing that list of specialties. Forums will always be an important part of the LEGO community, and they should be. I see Blockheads as an addition, not a replacement for them.

Sustainability has been a problem for LEGO-only image hosting sites in the past. Can we be confident that Blockheads is here for the long haul?

That’s a great question, and one we’ve given a lot of thought to. It seems like the ultimate reason that some of these sites fail is lack of funding. There’s a monetary cost to buying the infrastructure to run them and a time cost to maintaining and growing them. We’re going into this with a solution to that problem — Blockheads Pro. The core Blockheads functionality — everything you see on the site currently — will always be free. Our Pro accounts will be an optional, paid upgrade that unlocks additional features. These features will be nice to have, and we think enticing to many of our builders, but not necessary to use and enjoy Blockheads.

I’m not under any misimpression that I’ll buy my first yacht with the proceeds of Blockheads Pro. But I do believe that if we can deliver a quality offering for both our free and paid features, we can use that income to ensure the sustainability of the site.

What special features of Blockheads are you really happy to announce?

We already touched on this just a bit, but contests are something I’m really excited about. They’re one of the coolest parts of the LEGO community in my opinion, but as it currently stands there isn’t a great way to manage them, so people have had to turn to solutions like forums or Discord. With Blockheads contests, I think we can really fill that gap.

Our solution is flexible enough to support just about any contest format you can think of, which is a big win for contest hosts. They’ll be able to manage contest structure, builder participation, and judging all from an intuitive dashboard. We’ll also have a contests page where you can see all active, upcoming, and past contests which will make finding and promoting contests a lot easier. And for contest entrants, your entries will display on your profile page just like any other creation you upload — along with any awards you may win.

There’s a lot of awesome stuff around contests that I can’t wait to show off, but that will have to do for now.

Now I’m just being curious, but where did the name Blockheads come from?

I had the basic concept for what Blockheads would be before I actually had the name. I spent a few hours working on some very rough designs, but when it came time to actually start coding the real thing, I had to come up with a name. If I remember correctly, it took about 5 minutes to think of Blockheads. My first idea was Brickheads, but when I saw that LEGO already was using “Brickheadz” I knew that was a no go. But Blockheads was close enough, and I like the scenes in the Peanuts movies where Charlie Brown’s friends yell “you blockhead!” at him, so that was an added bonus.

What’s your vision for the future of Blockheads?

My belief is that Blockheads can and will become the de facto gathering spot for the online LEGO community. We talked about this earlier, but Blockheads has something for you regardless of where you fit in the community, and that’s only going to become truer as time goes on. But a lot of the future will depend on what our users want. We have what I think are some great plans and ideas, but as they say, “you have to give the people what they want”. I’ve really enjoyed and benefited from the feedback we’ve received in our beta. I can’t wait to see what the feedback will be after launch, and what the future holds.

So far, Blockheads.Builders has basic features such as liking, following, and commenting. And of course, uploading. Here’s a look at the uploader page: 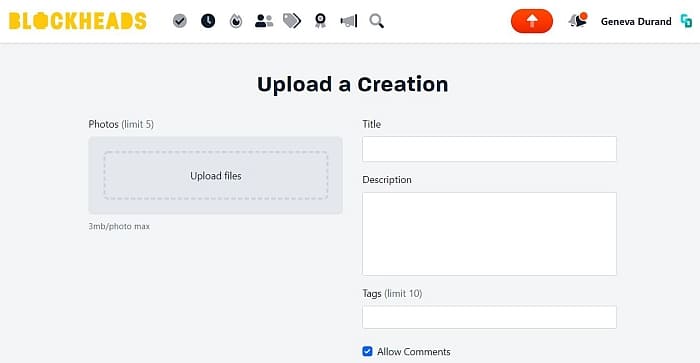 It’s simple and works smoothly – just stay under the 3MB per picture limit – and another great thing is how easy it is to edit your creation’s page once you’ve uploaded it. You can even add or delete pictures (up to the maximum of five).

After you’ve made an upload, it’ll show up on your profile page. I really appreciate the uncluttered layout. 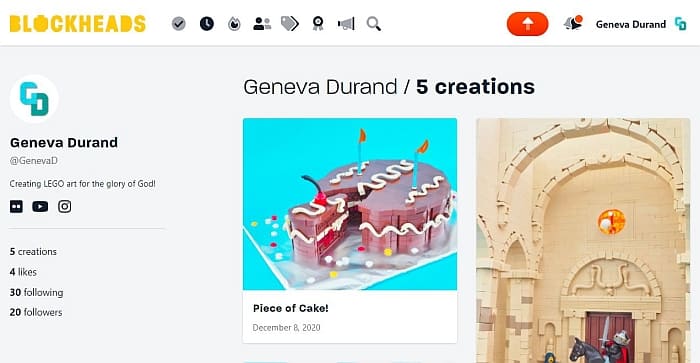 In conclusion, I’m impressed by Blockheads. I think it could potentially replace Flickr as the best place for LEGO builders to admire and comment on each other’s creations. Instagram will probably still be an easier way for more casual fans who just like seeing a creation or two on their feed. But if you like to immerse yourself in LEGO creativity, I recommend checking out the site at Blockheads.Builders.

What do you think? Will you be using Blockheads? Do you think a LEGO-only image site is a good idea? Feel free to share and discuss in the comment section below!

Next post: The First Periodic Table of LEGO Colors