The LEGO Art collection introduced many LEGO fans, as well as people who are now to LEGO, to the art of mosaic building. The sets cost $120 each and give you lots of options for different designs and combined models.

With the #31197 LEGO Art Andy Warhol’s Marilyn Monroe set, you can build one of the four versions of the famous artwork, and if you get four of the sets, you can display all four variations together. Similarly, the #31198 LEGO Art The Beatles set allows you to build one of the four members of the famous band, and if you get four sets, you can display all members together. Both of these sets include around three thousand 1×1 round tiles to build the mosaics, nine interlocking 16×16 LEGO Technic bricks that serve as the base for the mosaic, and pieces to build the frame. The frames already have a built-in hanger element, so you can easily attach them to a wall. 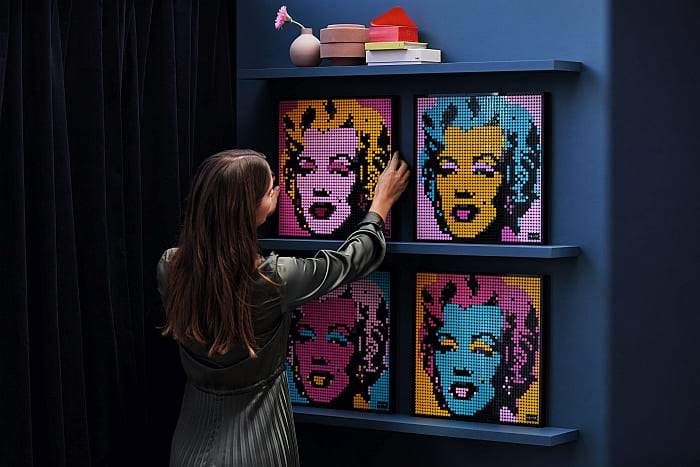 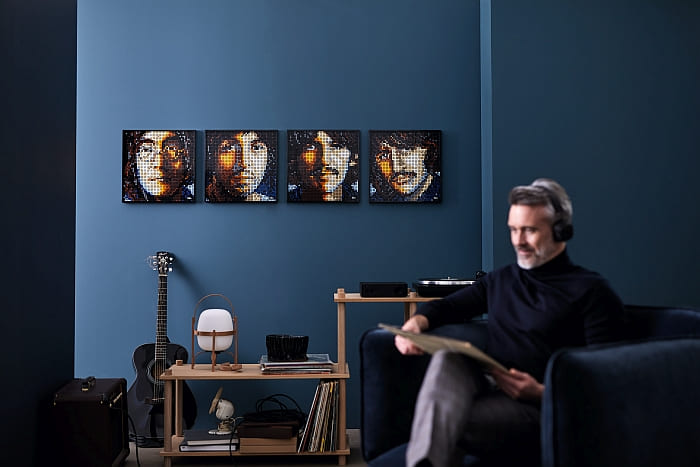 The two other LEGO Art sets that were released this year are a little different. The #31199 LEGO Art Marvel Studios Iron Man and the #31200 LEGO Art Star Wars The Sith both use 1×1 round plates instead of studs to build the mosaics. Also, each of them includes three alternate images (three Iron Man suits, or three Sith Lords), or if you have three of the same set, you can combine them into a single very large image (see pictures below). These sets also include the pieces to build the frame and the built-in hanger element. 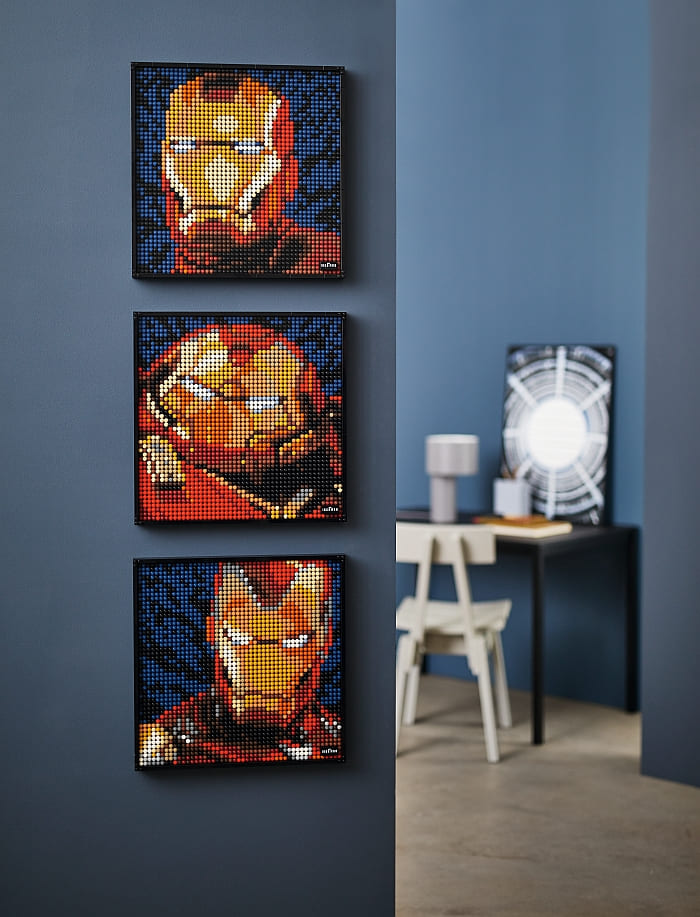 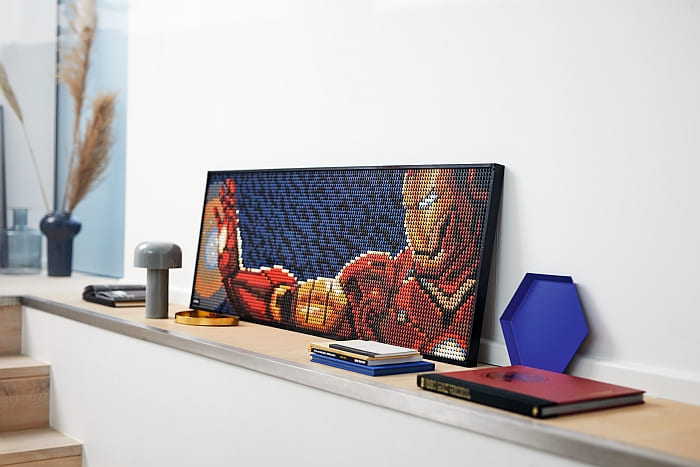 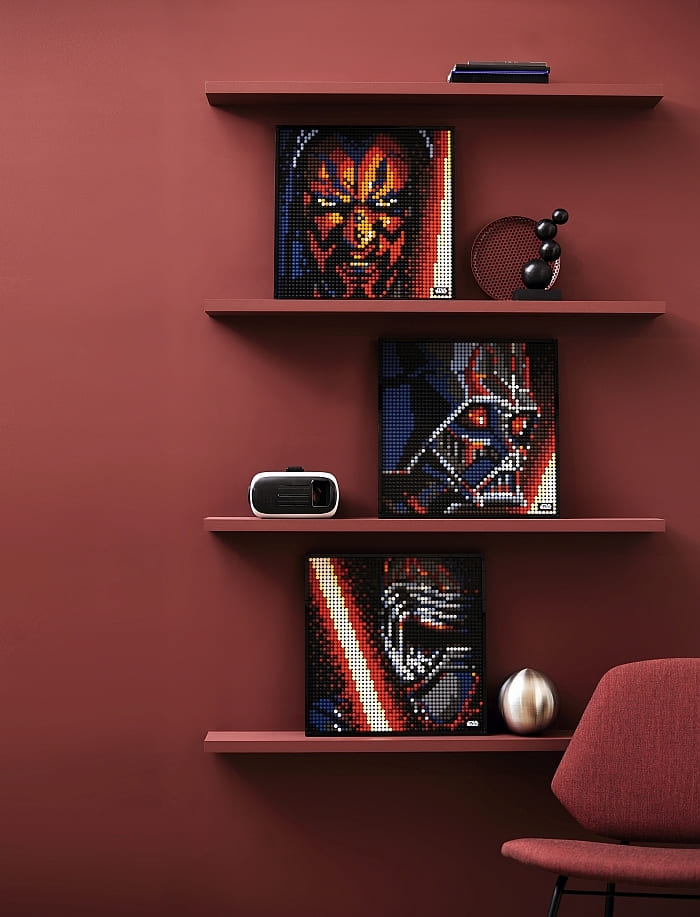 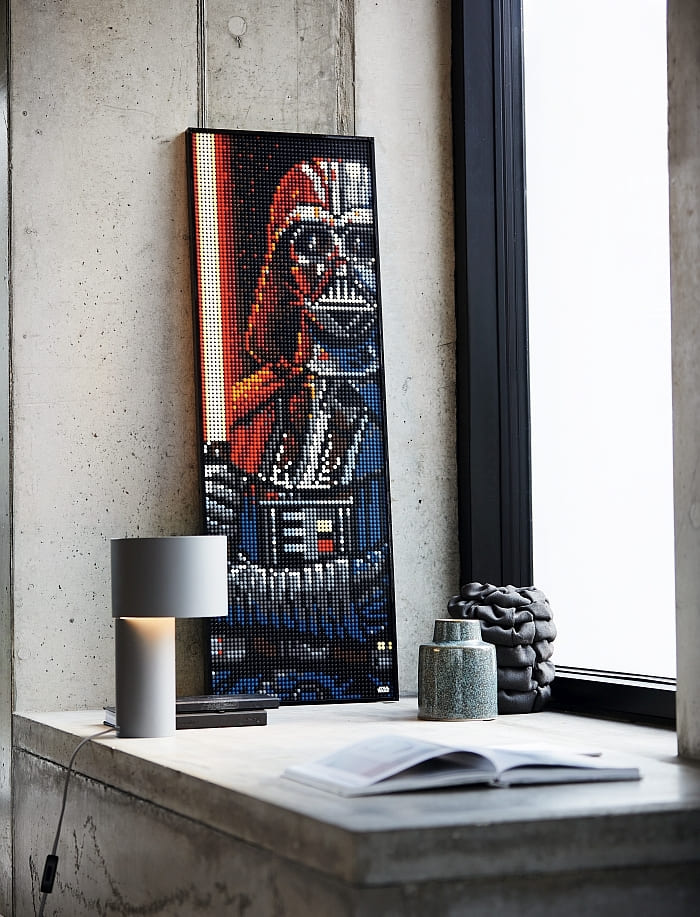 LEGO also revealed two more of the LEGO Art sets that will be coming next year (plus there will be even more later in the year). The #31201 LEGO Art Harry Potter Hogwarts Crests allows you to build and display one of the four house crests, or you can combine four sets together for the ultimate Hogwarts crest. And the #31202 LEGO Art Disney’s Mickey Mouse set provides instructions to build Mickey Mouse or Minnie Mouse, or you can combine two sets together for a larger display with both characters. 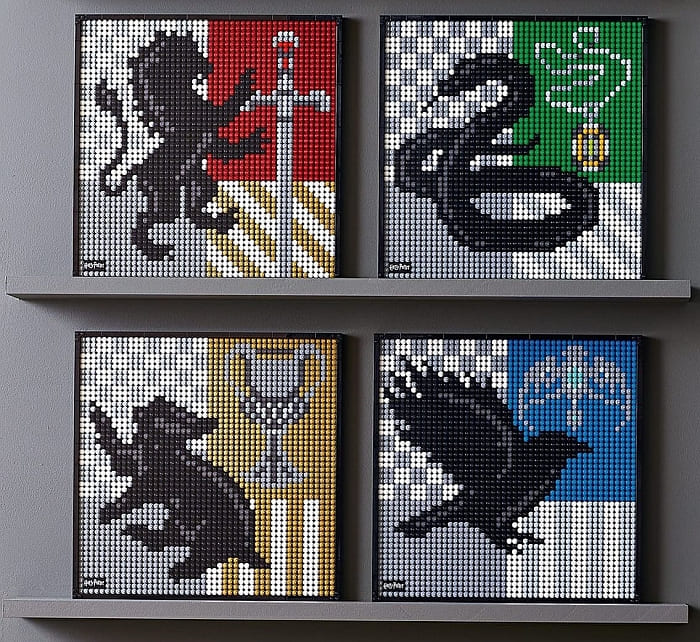 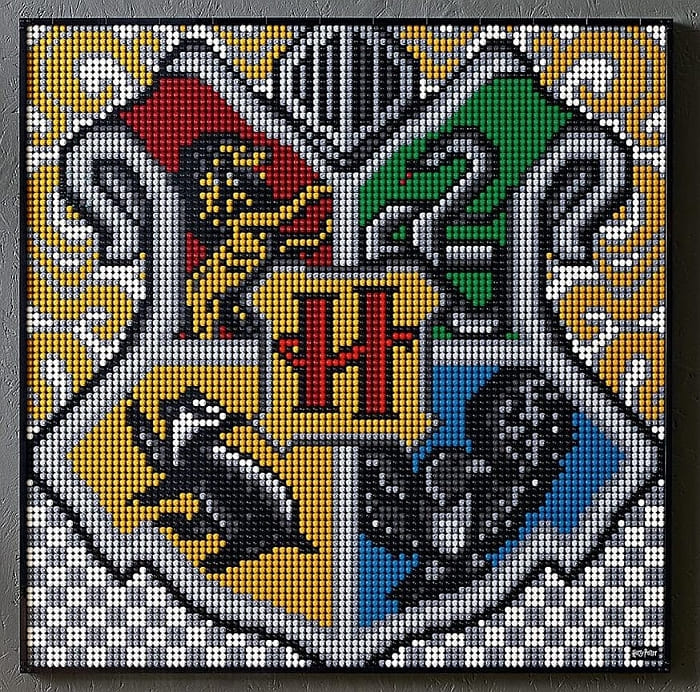 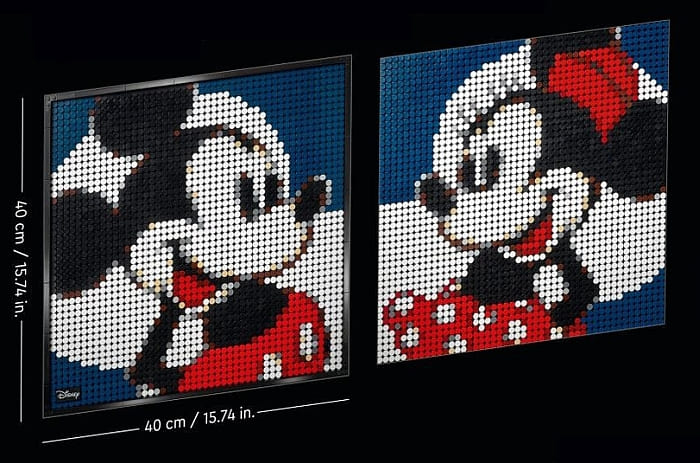 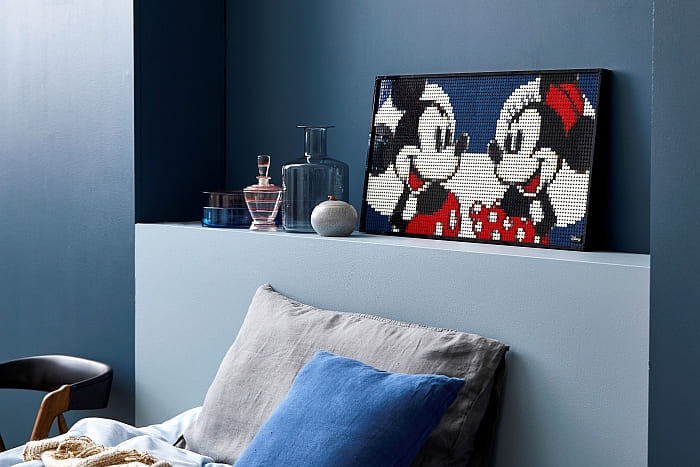 The LEGO Art sets not just introduce LEGO mosaic building, but they may also inspire you to build your own mosaics. The LEGO Art sets as well as the LEGO Dots collection are giving us tons of tiny pieces in a large variety of colors, so we should be able to reproduce pretty much any picture into a LEGO mosaic.

Keep in mind that the larger and more complex your original picture is, the larger and more complex your mosaic will have to be. This is because even the smallest LEGO studs and tiles make fairly big pixels. Notice that all of the LEGO Art sets are 48×48 studs (or about 15×15 inches) and focus on headshots. Even the combined Star Wars and Iron Man mosaics that use three sets only include part of a full figure. So if you want to keep your own mosaic reasonably sized, it’s best to zoom in to the most important part of your image and crop away any non-essential sections.

Once you decide what you want to build, you need to pixelate the image, which will help you turn it into a LEGO mosaic. There are a number of apps that can do this for you, including those specifically made for LEGO mosaics. My recent favorite is called LEGO Art Remix. As the name implies, this software works seamlessly with the LEGO Art sets, but it can also be expanded to the full LEGO color-palette. 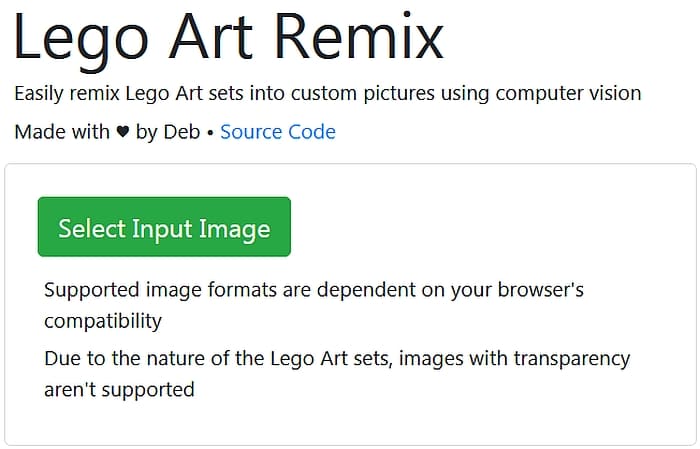 LEGO Art Remix lets you upload your own image, and then uses computer vision to use the studs from the LEGO Art sets to recreate the image, and then generate building instructions.

To begin, go to the LEGO Art Remix website (just click on the link). Upload the image you would like to turn into a LEGO mosaic. As an example, I’m using the image LEGO shared on social media to mourn the tragic loss of actor Kirby Morrow who voiced the Ninjago character Cole for more than ten years. This is not just a touching image, but it is also an excellent study for making a LEGO mosaic. It features both a real human face and a LEGO cartoon character in a mostly monotone color-palette. I thought it would make a nice mosaic in memory of Kirby. 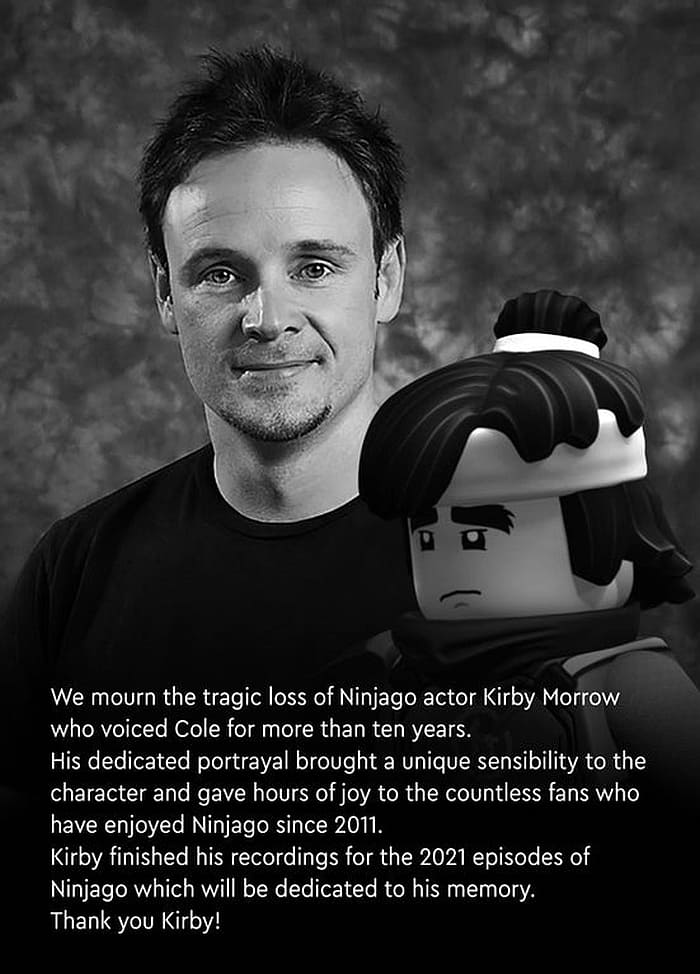 When you first upload an image, the default format is to turn the image into a 48×48 stud mosaic in the colors of the #31197 LEGO Art Andy Warhol’s Marilyn Monroe set. You can change the image size in Step 1 by adjusting the sliders from 16 studs all the way to 144 studs. I adjusted mine to 96×96, which is the size of four standard LEGO Art sets. In Step 2, you can adjust the hue, saturation, and value of the colors, or you can just keep them as they are. 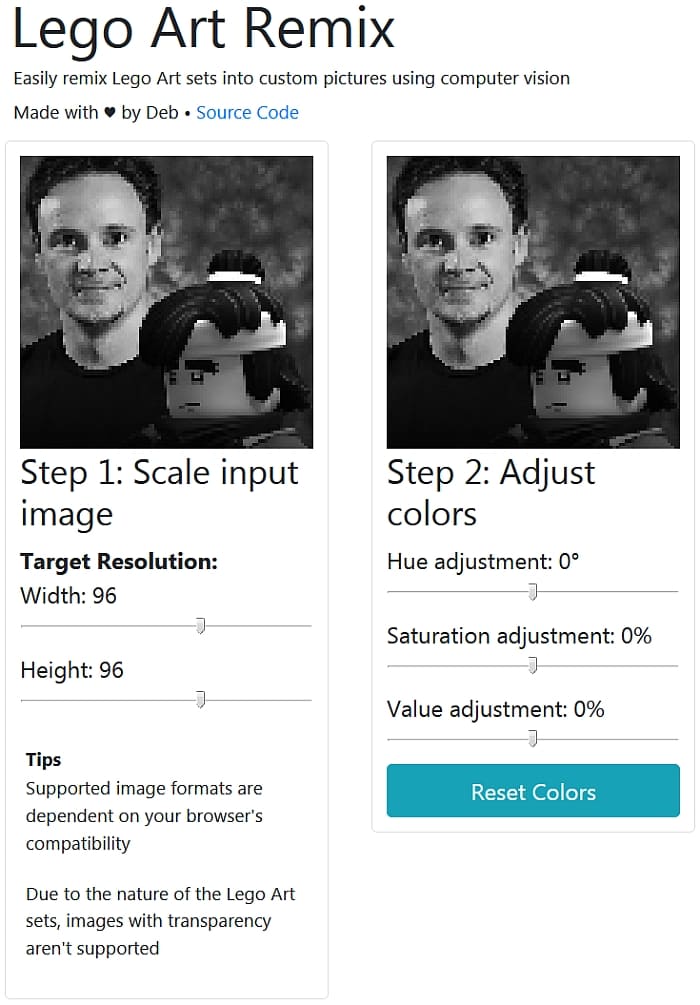 Step 3 is where you will be selecting the colors, and it’s probably the most fun part of the process. As I mentioned above, the software is set to the color selection of one Marilyn Monroe set, but of course, you can adjust this by adding more copies of the same LEGO Art set, mixing in pieces from other LEGO Art sets, manually adjusting the piece-count for each color, or selecting all available LEGO tile/plate colors. Please note that depending on the pieces available in the input set, many images don’t easily translate to the available color-palette. It’s best to use an image with similar colors to those of the LEGO Art set you have available. (In some cases, adjusting the colors in Step 2 can help greatly, but this doesn’t work for all source images.) 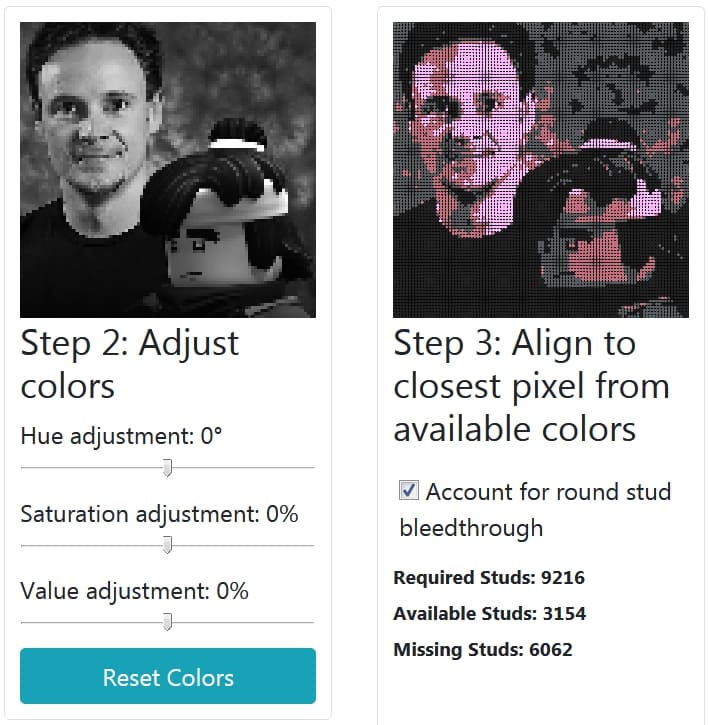 Step 3 also tells you how many pieces you will need in total to make your mosaic, which in the case of my mosaic, it’s 9,216 pieces. As you can see, because I haven’t yet adjusted the default setting from a single Marilyn Monroe set, I’m told that I only have 3,164 pieces available, and I’m still missing 6,052 pieces. At this point, Step 4 of the algorithm cannot run because of the missing pieces. So, I will have to add more LEGO Art sets to build my mosaic, or I could add in my personal inventory of LEGO elements, or just work with all the available colors and buy any missing parts from BrickLink. For the sake of this example, I’m using the colors available in the #31198 LEGO Art The Beatles set, as that had a similarly dark and muted color-palette. 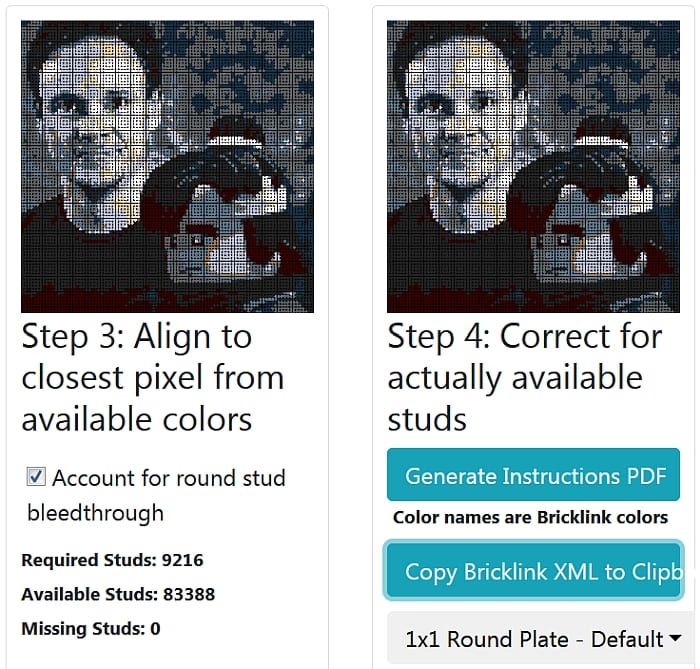 If you’re limiting yourself to the pieces from the LEGO Art sets, please remember that two of the sets come with plates and the other two with tiles. You could mix them in the same mosaic for some interesting effects, but this is best to adjust when you’re actually building the mosaic.

Also, please note that although the software uses the 1×1 round plates and 1×1 round tiles from the LEGO Art sets by default, you can also choose 1×1 square plates, 1×1 square tiles, or even 1×1 bricks in Step 4. If you are planning to use square pieces, uncheck the “Account for round stud bleedthrough” in Step 3. 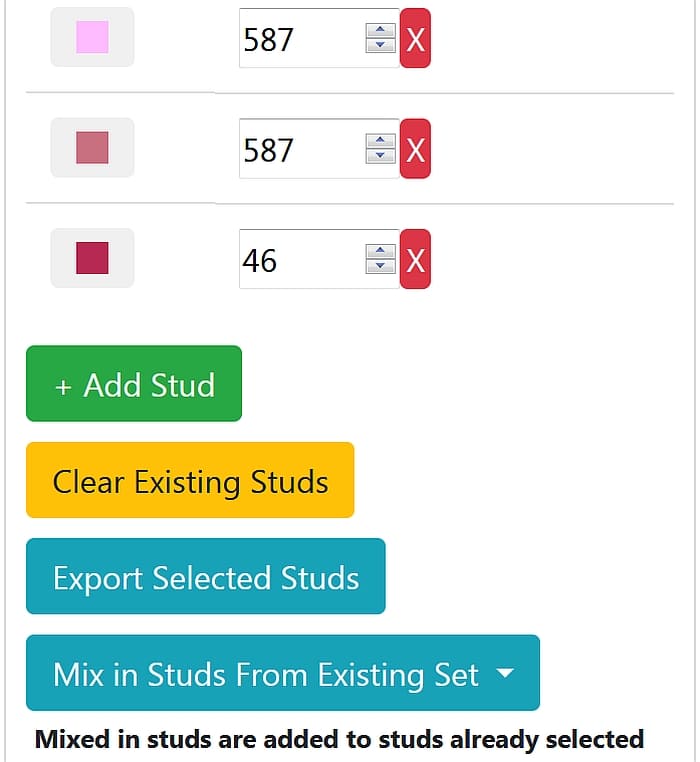 Once you are satisfied with your image, you’re ready for Step 4; generating a PDF instruction. The instructions include how many of each color you need, as well as the template for each 16×16 interlocking base sections. Now all you have to do is build your mosaic! 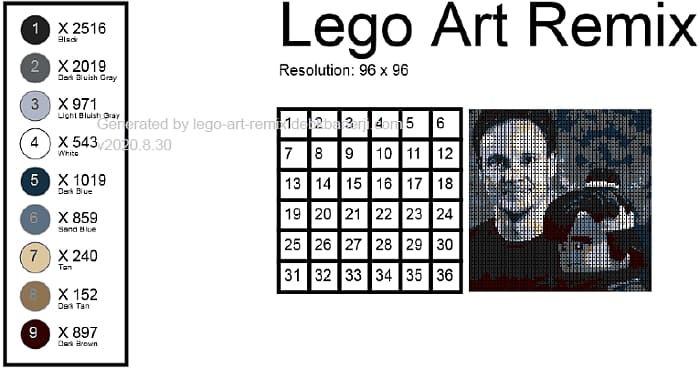 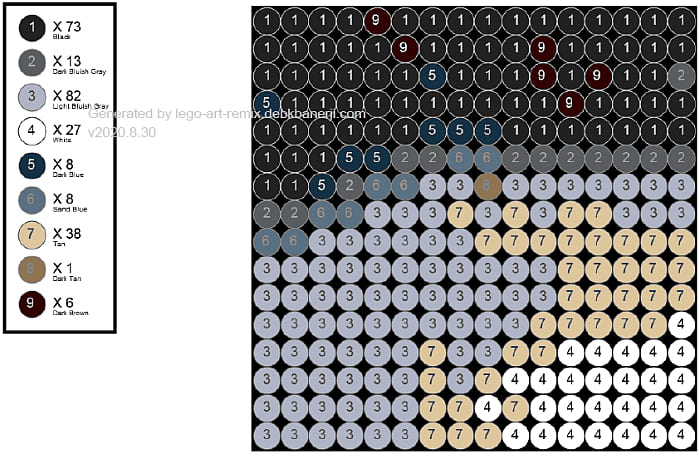 Now that you know how to build your own custom LEGO mosaic, you are not limited to just the official LEGO Art sets. I still recommend getting the LEGO Art sets because it’s the cheapest way to get the essential components; the 16×16 LEGO Technic bricks for the base, the hangers, and a huge selection of LEGO tiles and plates. You can always get more tiles and plates via BrickLink, but the other pieces are still quite rare. You can get all four currently available sets at the LEGO Art section of the Online LEGO Shop. 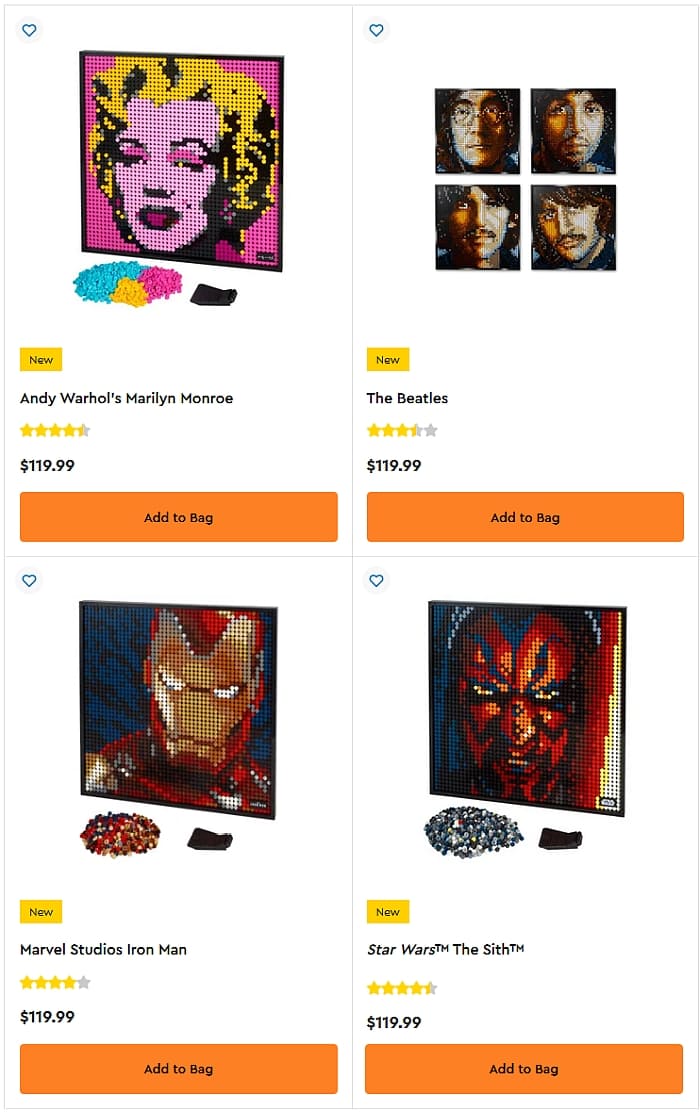