Series 21 of the LEGO Collectible Minifigures is going to be released in just a couple of weeks. There is a lot to like about this series, and also this series introduces some changes to collectible minifigs in general, so let’s take a closer look! 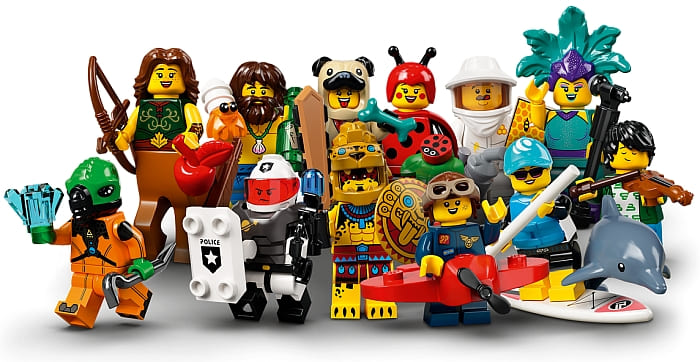 The most obvious change is that Series 21 features only 12 different minifigs instead of the usual 16. I suspect that this is going to become the new standard from now on. It does make it easier to collect all the figures and even get the extras you need without completely depleting your LEGO budget. 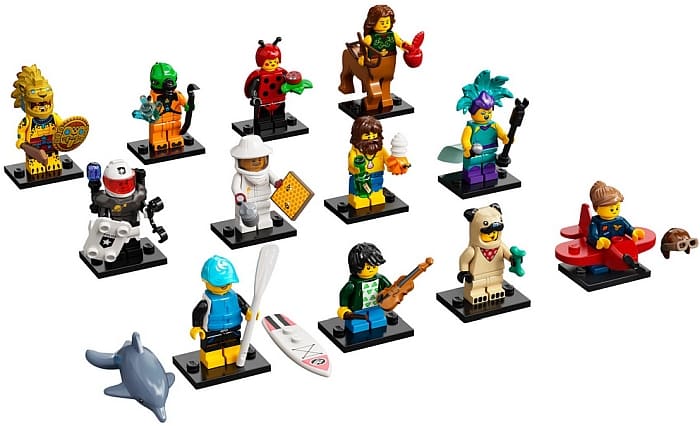 Also, this series comes in a box of 36 minifigs, instead of the usual 60. A full box includes 3 of each character. No more super rare or super common minifigs, which is a welcome change LEGO fans have been asking for a long time. In addition, the smaller box will make it so much more affordable to get a full box – a common way to get all the characters by those who don’t want to search for specific minifigs at retailers. 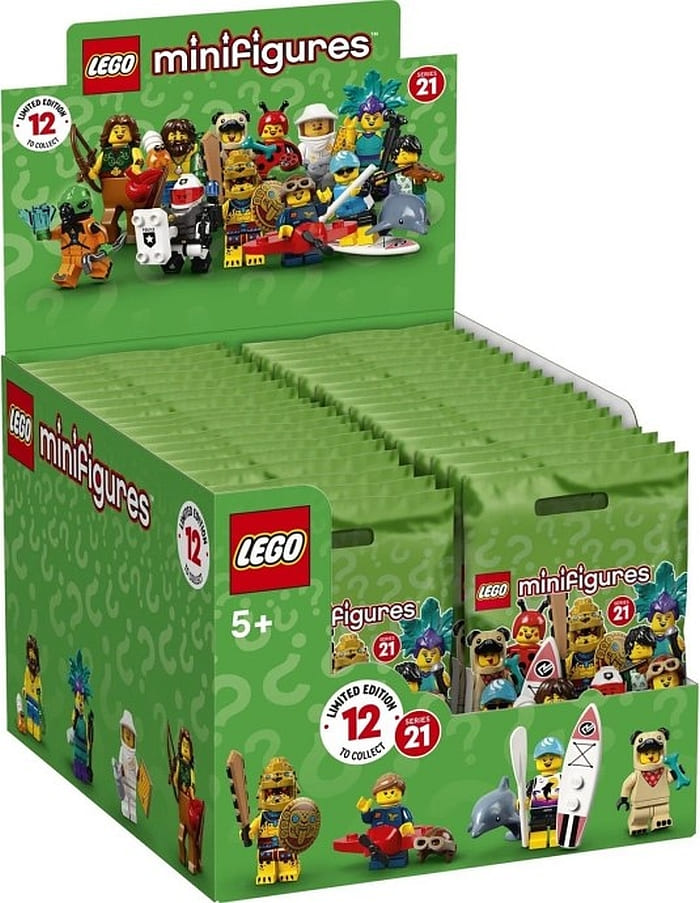 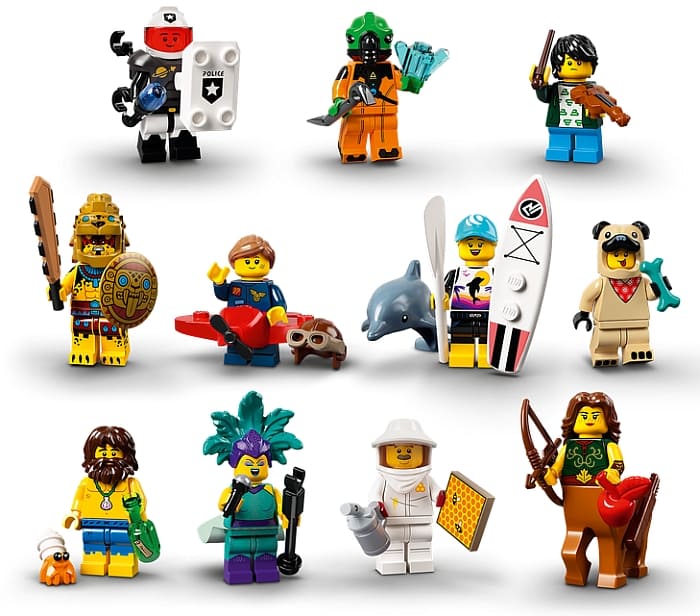 The Paddle Surfer comes with a new torso print featuring a dolphin on the front and a pink logo at the back (same as on the paddle board). Her legs are dual-moulded and printed with pocket. Her head is double-sided – one side wearing sunglasses and the other without them). I love her cap/hair combo, and she comes with a dark-azure life jacket. The peddle board is a nice addition to printed surf boards with a new design. But that’s not all! You also get a lovely sand-blue dolphin! This is a super easy minifig to identify, as her bag is so bulky! (Just don’t mix it up with the Centaur Warrior, the Ancient Warrior, or the Airplane Girl – three other minifigs with bulky accessories.)

The Cabaret Singer is a highly detailed minifig with a beautiful dual-moulded headgear dotted with silver sequins. Her torso and legs carry the same colors and design with more sparkly silver sequins. Her head is double-sided with fancy makeup, and she wears a shimmering silver cloth piece that attaches between her torso and legs. Her other accessories are a microphone and microphone stand (made of three pieces).

The Airplane Girl comes with a tiny airplane that is attached between her torso and legs. It’s similar to the race car of the Race Car Guy from Series 18. These toy vehicles would make great fixtures to a carousel or for a coin-operated ride. Her torso is nicely printed on both sides, her head is double-sided, and she comes with both a hairpiece and old-style pilot helmet with goggles (you get one extra of the goggles and the propeller).

The Shipwreck Survivor is another useful character with a bare torso, dual-moulded and printed legs, and single-sided head. I like the shell necklace and the tattoo on the right arm. The little orange crab hiding in a shell (made of an ice cream piece and 1×1 round plate) is adorable! Another accessory is a trans-green bottle with a new print. 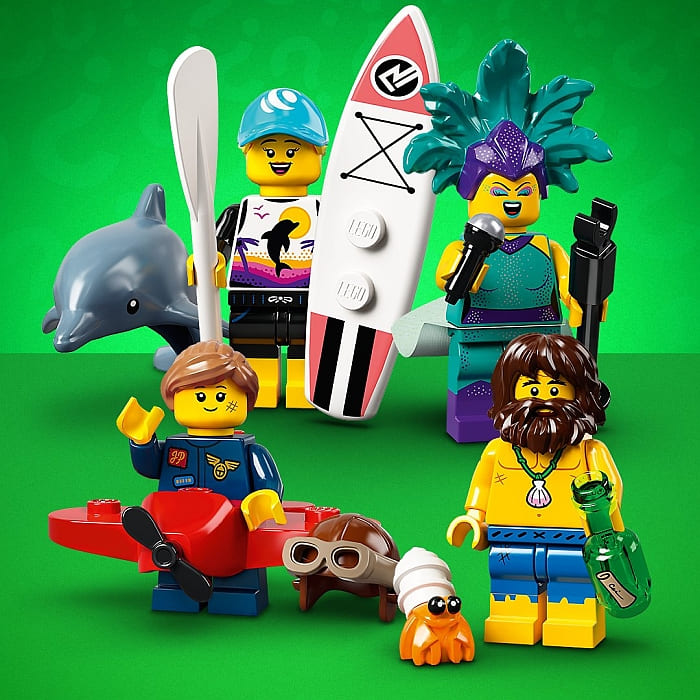 The Centaur Warrior is another highlight of this series. Her centaur body is dark-orange with a dark-brown tail. Her torso is printed both front and back with intricate designs, and she also has printed vambraces with gold highlights. Her head is double-sided, and her accessories are the standard LEGO bow and quiver elements, plus a red apple. Note that the quiver should be attached to the centaur body, and not the neck-post of the minifig. (The quiver is too long and doesn’t fit over the centaur body without bending backwards and significantly stressing the neck connection.)

The Beekeeper is another useful character we never had before. His torso is printed both front and back, his legs are printed on the front and sides, and his head is double-sided. I found it interesting that for the facemask LEGO designers didn’t use the standard trans-black color, but a more opaque version (it’s moulded into the rest of the helmet). This imitates a beekeeper’s mesh mask much better than normal trans-black would. The two accessories are a beehive frame printed on a 2×2 tile, and a bee smoker (a device used in beekeeping to calm honeybees) that’s made of an upside down cup and attached angled spout (you get one extra of this piece).

The Ladybug Girl is a real cutie with a printed ladybug costume, separately attached wings, and a 1×1 round tile printed with a ladybug (you get one extra) sitting on a leaf element. Her head is double-sided and her ladybug cap is the same as the Bumblebee Girl’s from Series 10.

The Pug Costume Guy is the second costumed minifig in the series. He is nicely printed, but his only accessory is a bone (you get one extra of this piece). I wish something else was also included. An adorable minifig nonetheless. 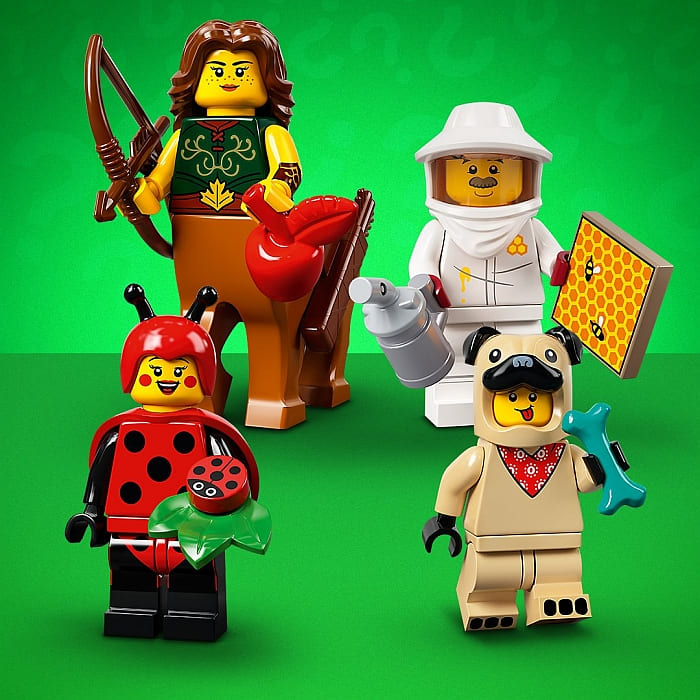 The Ancient Warrior rivals in awesomeness with the Aztec Warrior from Series 7. He is printed head to toe, front and back, and comes with a gorgeously detailed and printed tiger headgear, printed shield, and a wooden club with embedded obsidian blades.

The Space Police Guy brings back the LEGO Classic Space logo on a black torso, but with many awesome upgrades. His helmet is updated and printed, he comes with a super cool shoulder and chest armor with clips at the back for the handcuffs and what I think might be a taser, and an awesome printed riot shield.

Violin Kid comes with a brand new and beautifully printed violin, and a Harry Potter wand for the violin bow (you get one extra of this piece). And notice the Blacktron shirt – a cool nod to the classic LEGO theme! The kid’s head is double-sided with closed eyes on one side and a determined look on the other side. Cute kid!

The Alien is probably the character the Space Police Guy is looking for! It comes with an amazing and highly detailed head and fully printed body that could be interpreted as either a space suit or prisoner jumpsuit. The accessories are a crowbar and gem. It looks like this alien is smuggling precious gems? 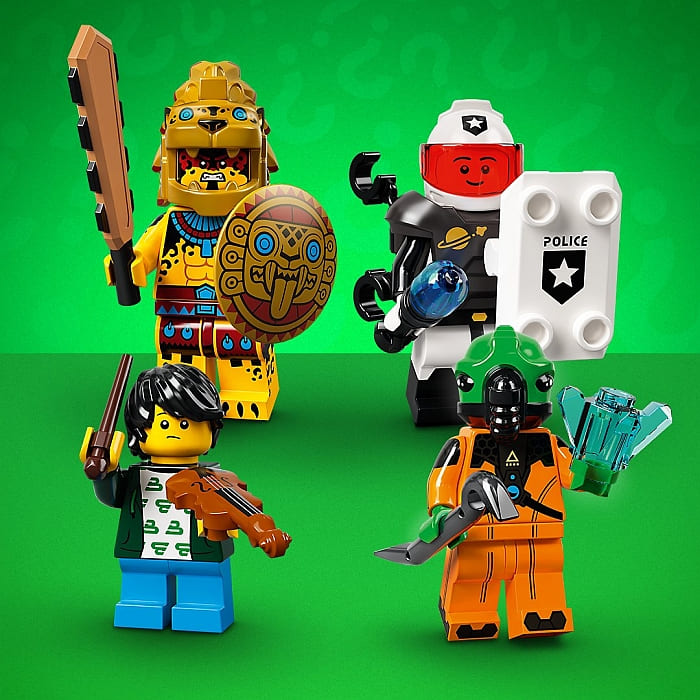 In summary, I would say that this series gives us a fantastic variety of characters. We are getting some really nice accessories like the peddle board with new print, the violin, the little grab, the little ladybug, the centaur’s body, the beekeeper’s equipment, the toy airplane, and more. Many of the minifigs would add variety to a city layout, while others like the Ancient Warrior, the Space Police Guy, Alien, and even the Centaur Warrior would be great army-builders. Again, the series will be available on January 1st at various retailers and the LEGO Minifigures section of the Online LEGO Shop.

What do you think? How do you like this series of Collectible Minifigs? Are you planning to get any of them? Or collect them all? Feel free to share your thoughts and discuss in the comment section below!