Yesterday we discussed the newly released #10280 LEGO Flower Bouquet, and today, we will take a look at the #10281 LEGO Creator Bonsai Tree. Both of these sets are part of the new LEGO Botanical Collection targeting adult LEGO fans, or even adult who are not yet LEGO fans but would be attracted by the beauty of these sets. 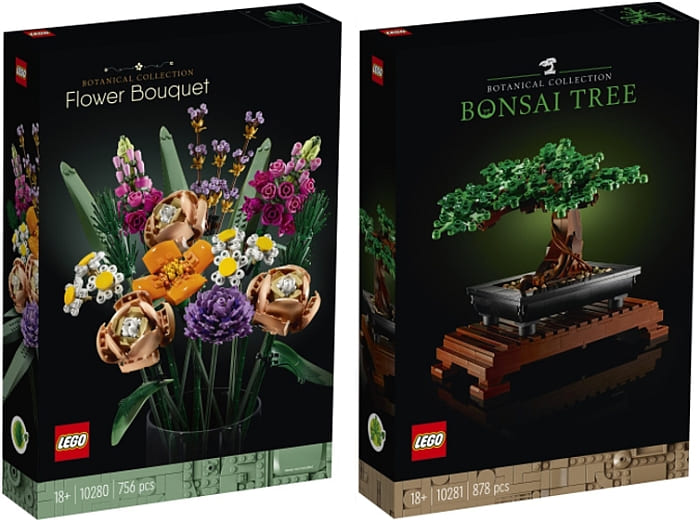 From the two sets, I would say that the #10280 LEGO Flower Bouquet is the more eye-catching because of the unique colors, many different shapes, and unusual use of parts. But the #10281 LEGO Creator Bonsai Tree is unique in its own way; it faithfully mimics the serene beauty of a real bonsai, it comes with two different display options (green leaves and cherry blossoms) as well as several other display suggestions, and it can even be tended to and shaped similarly to a real bonsai. 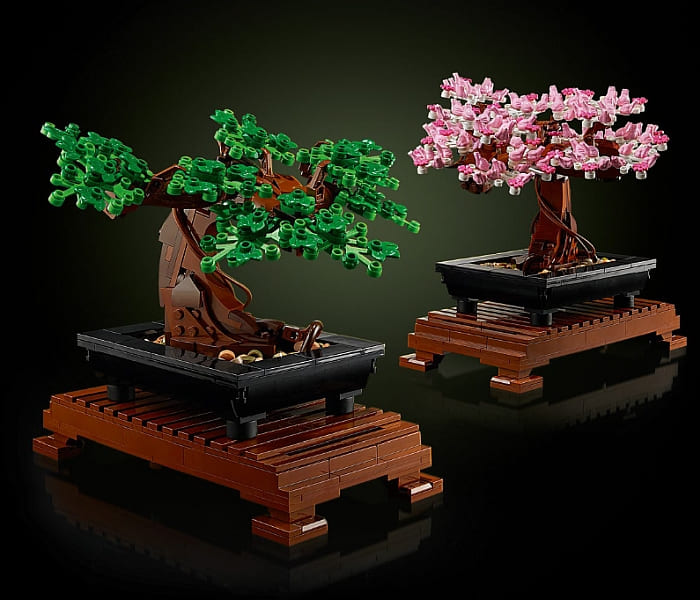 The box of the #10281 LEGO Creator Bonsai Tree is the same size and shape as that of the #10280 LEGO Flower Bouquet; simple black boxes that highlight the beauty of the sets. The instruction booklets are also the same size, but thankfully the instruction for the bonsai feature light-gray pages instead of the difficult-to-see black pages of the bouquet. My guess is that LEGO went with the lighter color because the dark colors of the bonsai would be even harder to see. 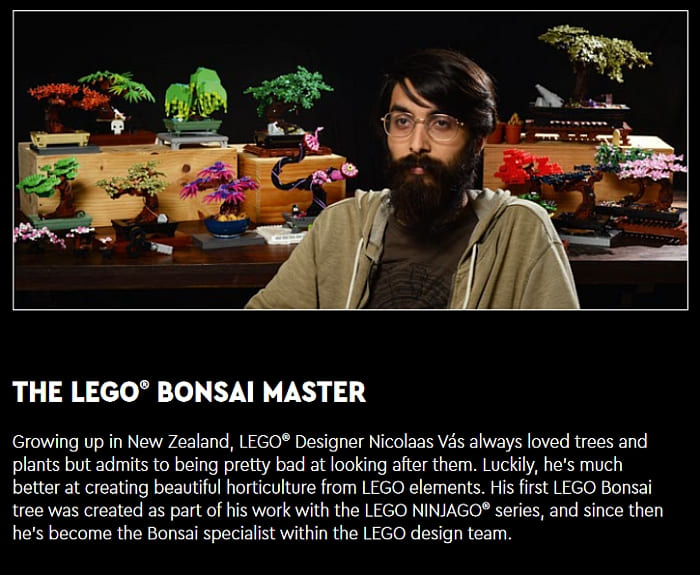 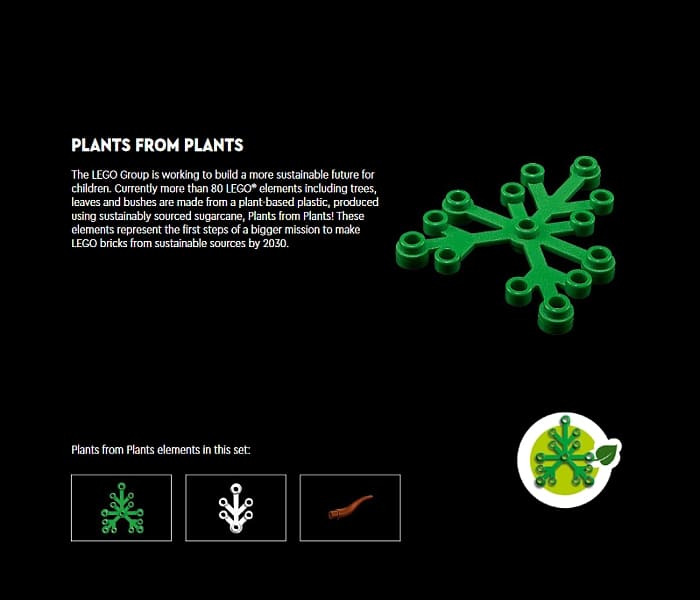 At the beginning of the instruction booklet, there is a bit of info about the traditional art of cultivating bonsai trees, the elements in the set produced using sustainably sourced sugarcane, and LEGO designer Nicolaas Vas. Below, I’m including the designer-video with Nico, where he talks more about the set, how it came about, and some of its special features.

The parts to build the #10281 LEGO Creator Bonsai Tree come in six sets of numbered bags. Bags #1 contain the pieces to build the shallow flowerpot. This is simple and elegant build with sleek lines. I really like the use of rubber tires for the feet. This makes the flowerpot very stable on pretty much any surface. 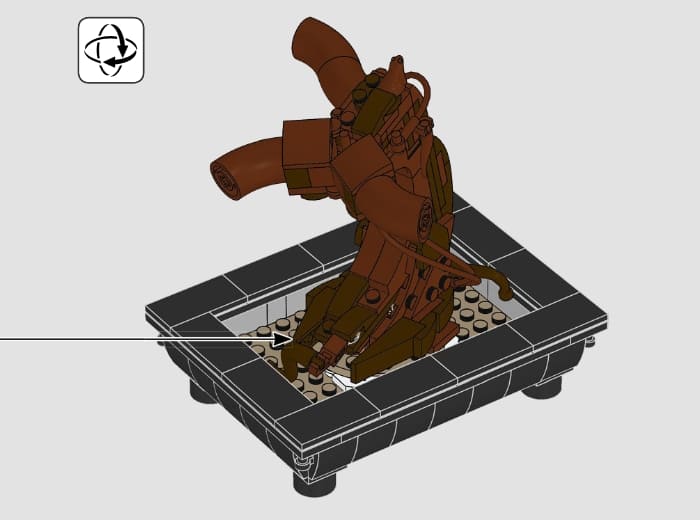 Bags #2 contain the pieces to build the treetrunk. I had a little bit of trouble building the lower portion of the tree trunk. The two triangle shaped sides kept falling off, but they eventually do get locked in place. This is the first time the large round elbow bricks appear in reddish-brown, and they form the three large branches of the bonsai. This is also the first time the long flexible vines appear in reddish-brown. You get two of them in this set. The two curvy dark-brown root pieces are made of an older element that was originally used as an elephant trunk. I like the placement of one of the roots as it blends in nicely with the rest of the pieces, but I’m not convinced about the placement of the other one. I feel that the connection to the reddish-brown robot arm is distracting and doesn’t look as organic as the rest of the tree. 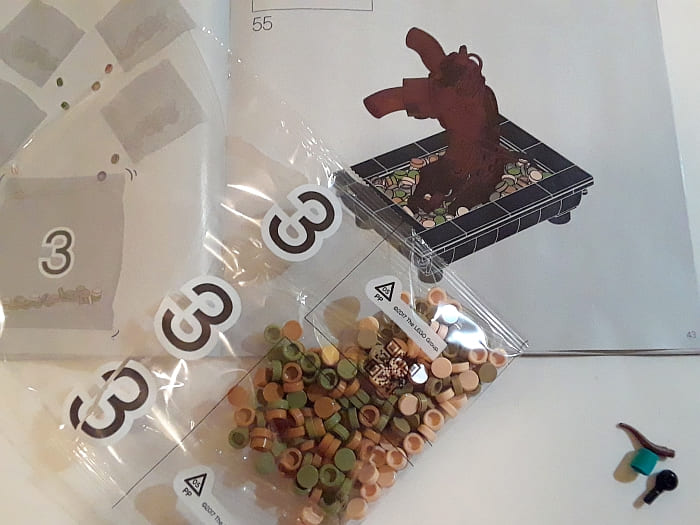 Bags #3 contain the loose 1×1 round tiles to mimic soil or small rocks. You get fifty of each of light-nougat (also called light-flesh by LEGO fans), medium-nougat, olive-green, and dark-tan. When you combine them, they fill the flowerpot just enough to reach the edge without falling out. They look very nice mixed together and adding a bit of color to the whole arrangement. 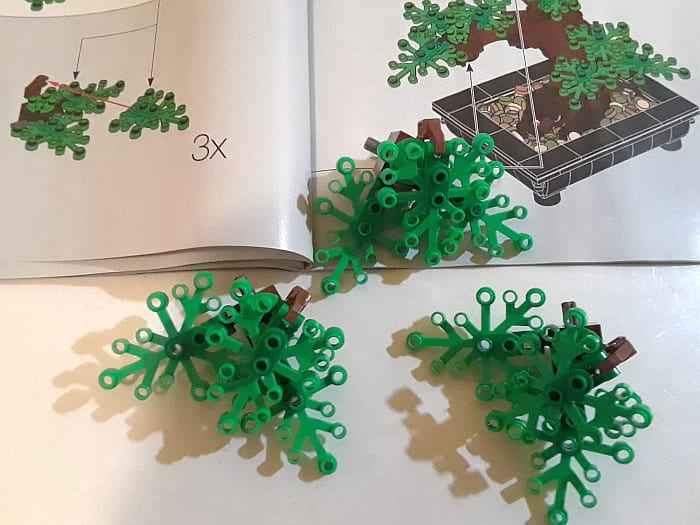 Bags #4 include all the green branches, leaves, and other parts to build the green tree canopy. You basically build ten identical assemblies. One of them is attached to the tree by itself, and the other nine are grouped into clusters of three assemblies that are then attached to the three main tree branches. The instructions direct you to build the assemblies first, attach them to the tree, then attach the thirty-three smaller leaves and ten green 1×1 round buds at the end, but I found it’s easier to just assemble all of them fully with the big and small leaves, then attach the completed assemblies to the tree. Of course, you can attach the small leaves in any position you want, but if you want to attach them according to the instructions, preassembling the branches helps greatly. And now you have a beautiful green bonsai tree! 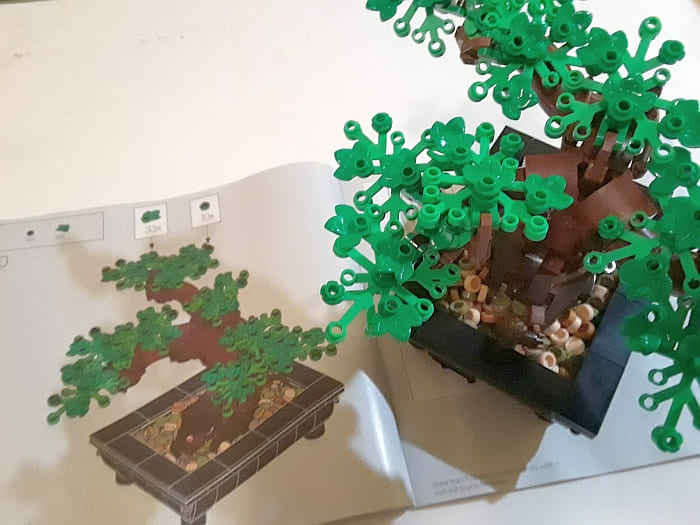 When you get tired of your green bonsai, you can build the other version with the pink cherry blossoms. The parts for this version of the tree are found in bags #5. You get forty white plant elements, one-hundred pink frogs (!), and 40 dark-pink flowers, along with reddish-brown bicycle handlebars and other pieces to build the alternate version of the tree. 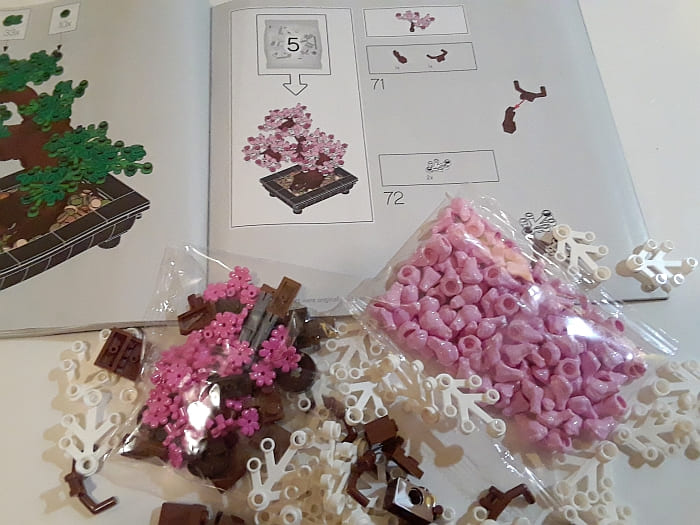 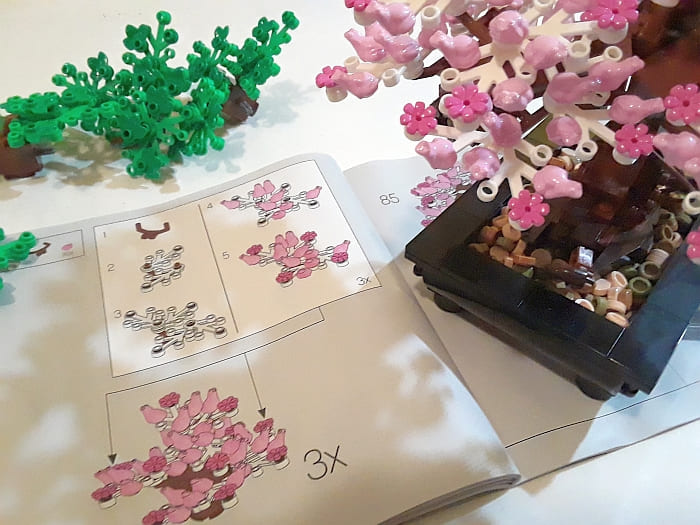 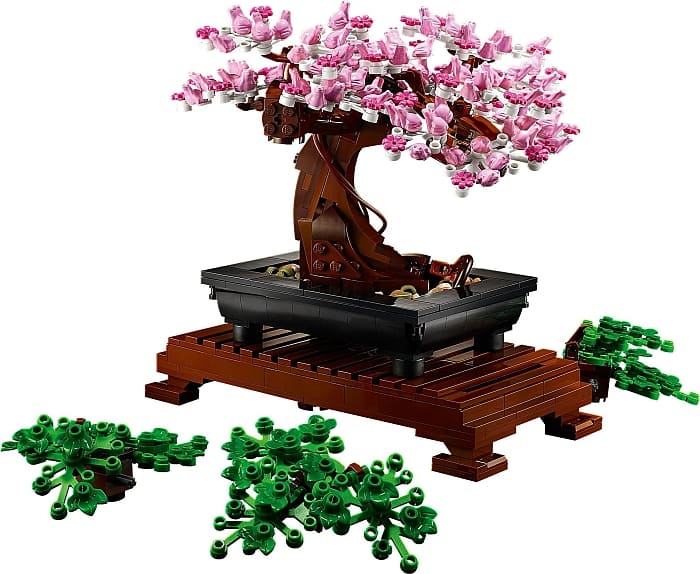 By they way, switching out the green assemblies to the pink ones is super easy. They are attached to the main tree branches with a LEGO Technic pin, so all you have to do is pull out one assembly and replace it with the other one. 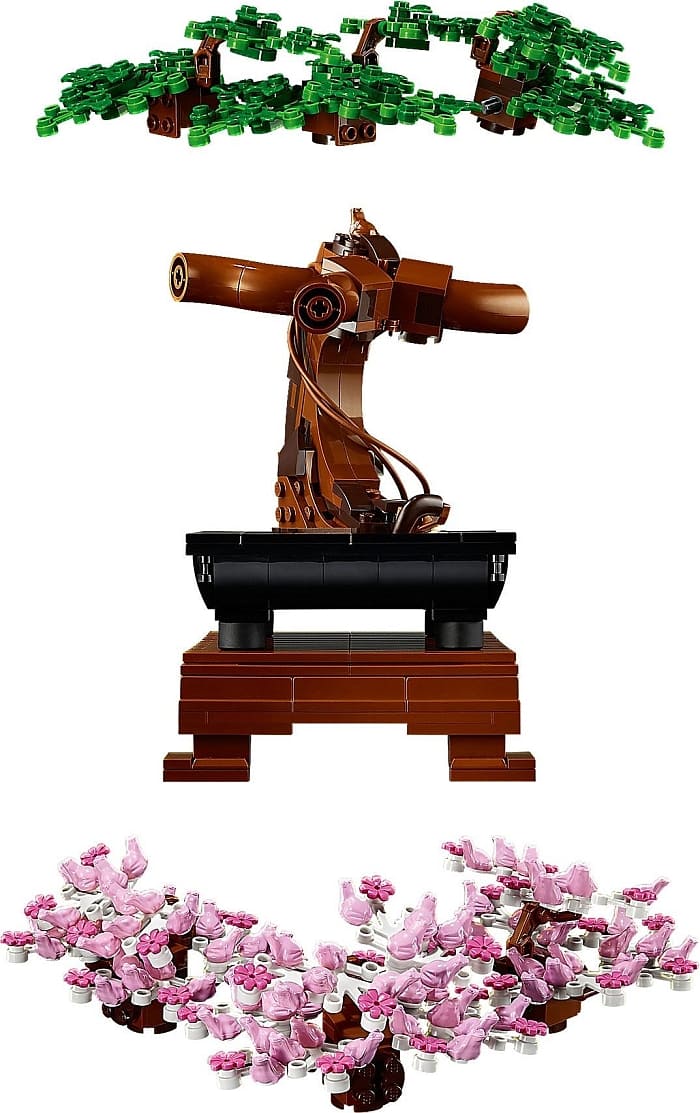 When I reached this point of building the set, I started playing with adjusting the canopy to make it look the best and admiring the tree from different angles. I completely forgot that I was not done building the set yet! There was still bags #6 that contain the parts for building the stand. Honestly, the flowerpot and bonsai look so nice, there is really no need for the stand at all. But if you want to build it, it’s time to open the final bags. The stand mimics wood, and thus all the pieces are reddish-brown (plus a few hidden dark-brown parts). This is another simple and clean design that matches the flowerpot very nicely. 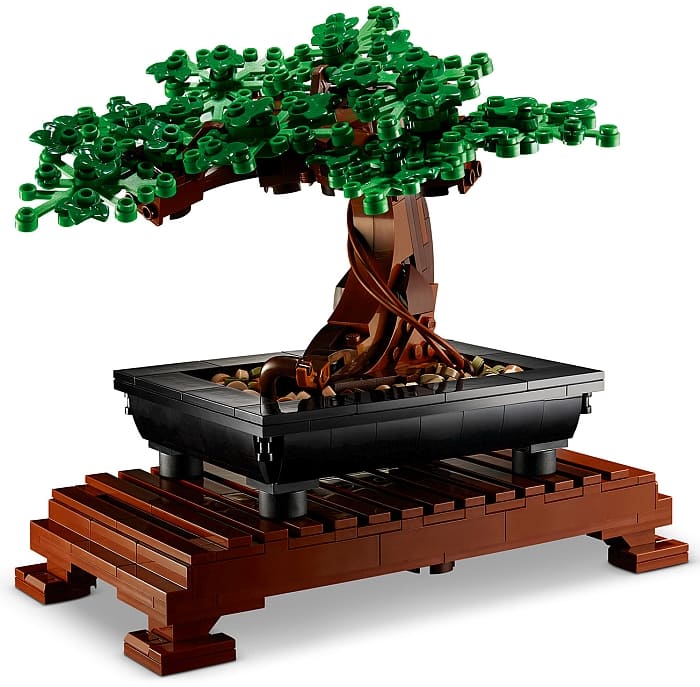 And now your beautiful bonsai masterpiece is finally done! From the two different canopies, I think I like the pink one better. Not just because it’s more colorful, but also because it seems to me that the combination of the smaller white leaves, flowers, and blossoms (frogs) is more adjustable and thus more effective at making a nice canopy. I’m considering making a green canopy using smaller leaves. 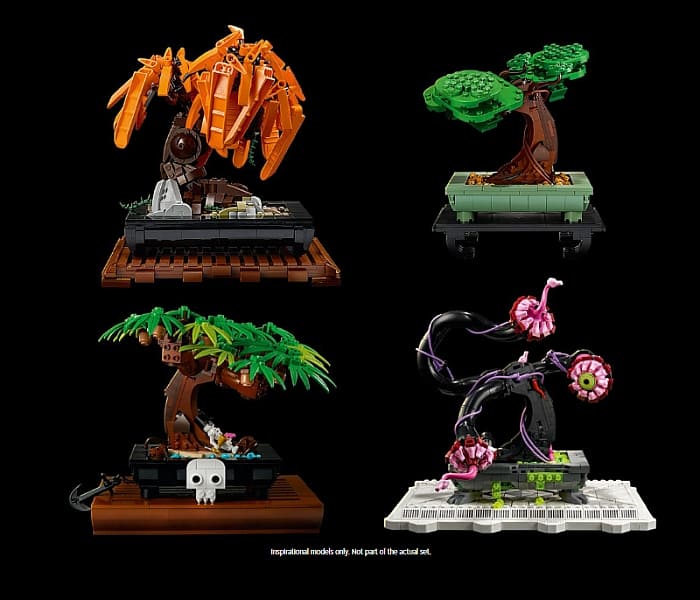 At the back of the instruction booklet, there are suggestions for other bonsai designs, and you can also see more in the designer-video above. Some of them are traditional bonsai trees using other types of leaf elements, while others are fantasy creations or something funny. The bottom line is that you have plenty of options to customize your bonsai and keep working on its shape, color, and design. 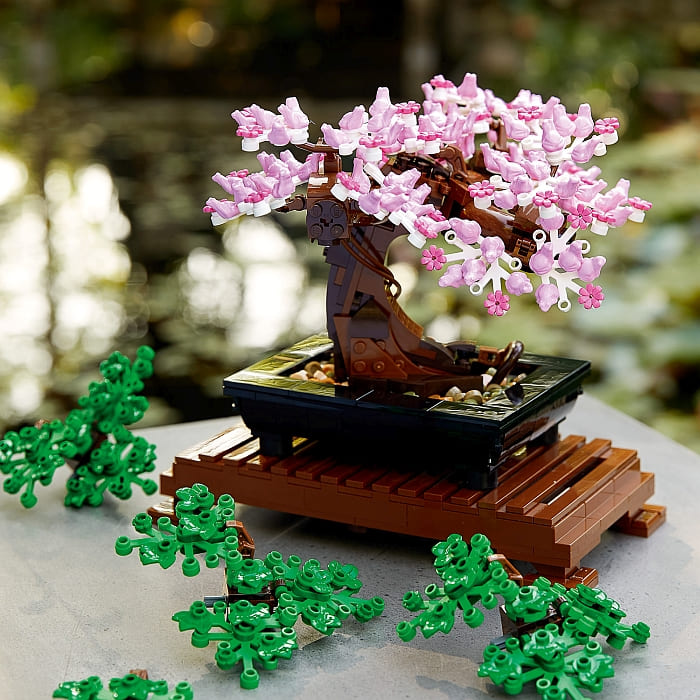 I should also mention that this little tree is also an excellent template for trees that you can add to your minifig-scale LEGO dioramas like cities, medieval towns, forests, islands, and more. It has a nicely shaped tree trunk that would look pretty in many different settings. The $49.99 price tag may also allow you to purchase more than one of this set to get useful parts for tree building. In summary, I love this set. It makes a nice display, it’s interactive, and it would also make a great gift for even non-LEGO fans. If you would like to check it out, it’s available at the LEGO Creator Expert section of the Online LEGO Shop. 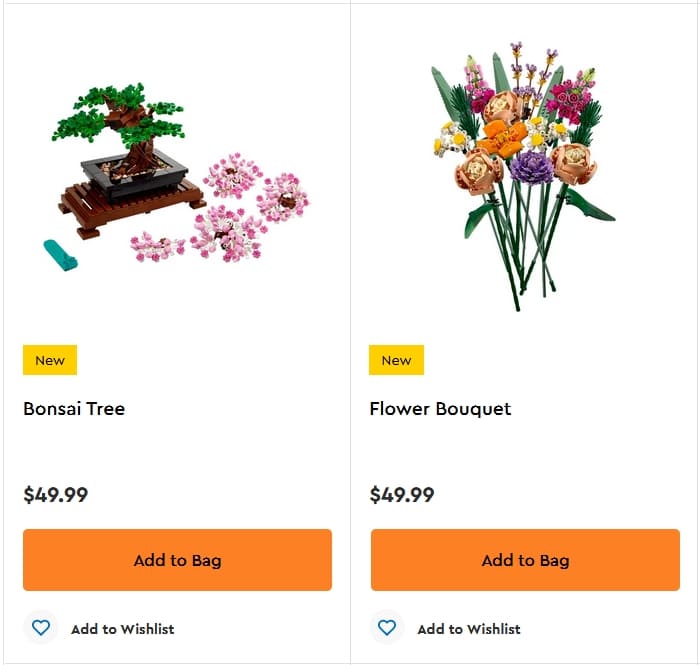 What do you think? How do you like the LEGO Bonsai Tree? Is this a set you’re planning to get? Which version of the tree do you prefer? Feel free to share your thoughts and discuss in the comment section below!