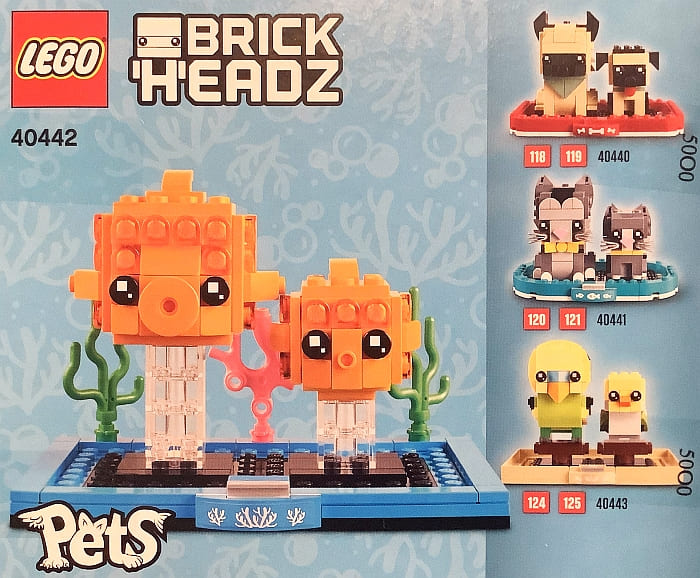 Personally, I love LEGO BrickHeadz. I’m always thrilled to see the tweaks and techniques to bring new characters into the collection. But there is admittedly a bit of bias on my end to look favorably at these sets. Given the fact that fish and birds are far from the normal LEGO BrickHeadz humanoid characters, or even the animals we got so far, these two sets promised to be a unique experience. So, I was looking forward to reviewing them. Below, I will share my thoughts both in writing and video.

Given the fact that fish don’t have much in the way of a vertical body, it was going to be interesting to see how LEGO designers translated fish to BrickHeadz. Put it simply, they went straight to building the standard LEGO BrickHeadz head structure and call it the body. This was an interesting way to keep the fish small and proportional and within the familiar BrickHeadz scale. 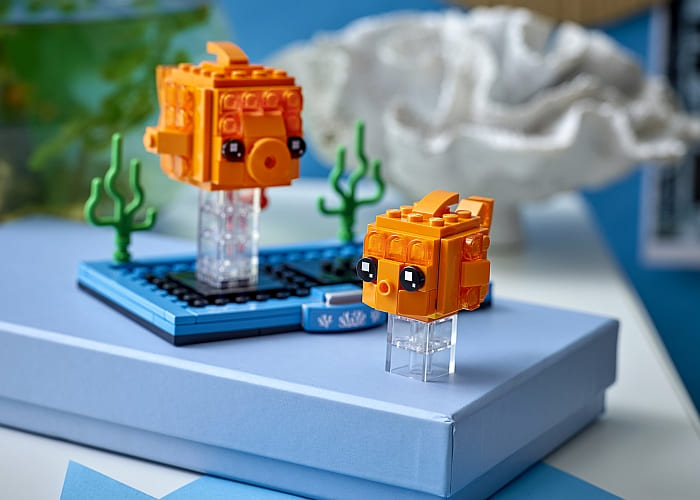 As far as the building experience, this is a simple set as you are basically just building BrickHeadz heads without the body. The most intricate elements are the transparent-orange tombstone-shaped tiles that make up the scales of the fish. Having the fish suspended over the base with clear bricks is a nice touch, but it can leave longtime BrickHeadz fans a little underwhelmed. Because you don’t get anything below the head, it sort of feels like half the building experience of a normal BrickHeadz. Additionally, I didn’t feel blown away by any stage of the building experience. Over the years, I’ve come to expect something slightly novel in each of the LEGO BrickHeadz sets in terms of how the characters came together. That just didn’t happen here. 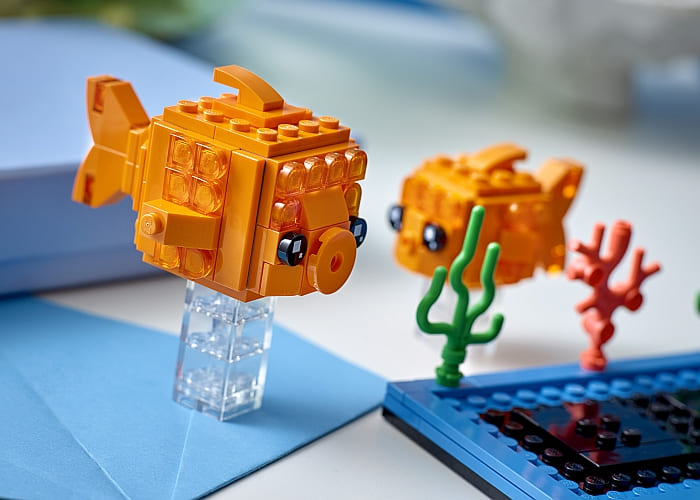 I was hoping when I heard rumors of this set that it would include an aquarium, but that’s unfortunately not the case. You just get a plain rectangular base with some seaweed in the back to perhaps simulate a fish tank? 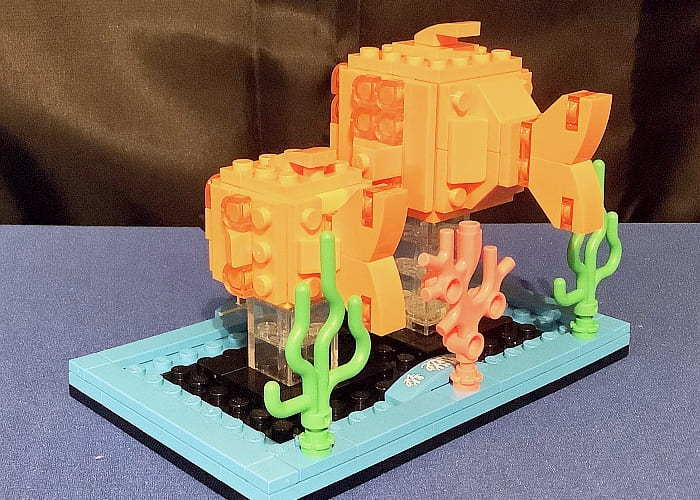 Now that’s not to say I hate the set. It still gives us two fish, which is a novel design in the LEGO BrickHeadz line. I can just imagine builders and pet fans wanting more out of the model. If you’re a LEGO BrickHeadz completionist, I would suggest you wait until this set goes on sale. Now if you are a fish fan and have always wondered why there aren’t more fish in the LEGO universe, then this would be a cute set to pick up. It will be available in March at the LEGO BrickHeadz section of the Online LEGO Shop.

This is a bit more ambitious LEGO BrickHeadz set. The body of the larger budgie is rather interesting as it attempts to round out and curve the body. The end result is rather impressive. On top of that, the budgie presents a whole lot of color, more so than most LEGO BrickHeadz. 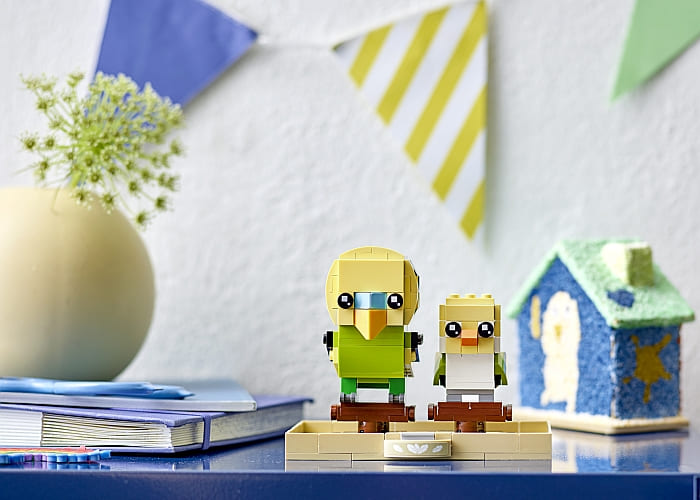 One nifty building technique in the larger budgie is the use of quarter round tiles. Not only are these bright and colorful, but they utilize the cut section of the tile to let secondary colors show through. What you end up with is a rather complex color pattern, suitable mimicking a bird’s plumage.

You also get two perches for the birds to stand on. The last time I saw anything like this was with the #40352 LEGO BrickHeadz Scarecrow where the wooden cross-shaped stand was built into the body. 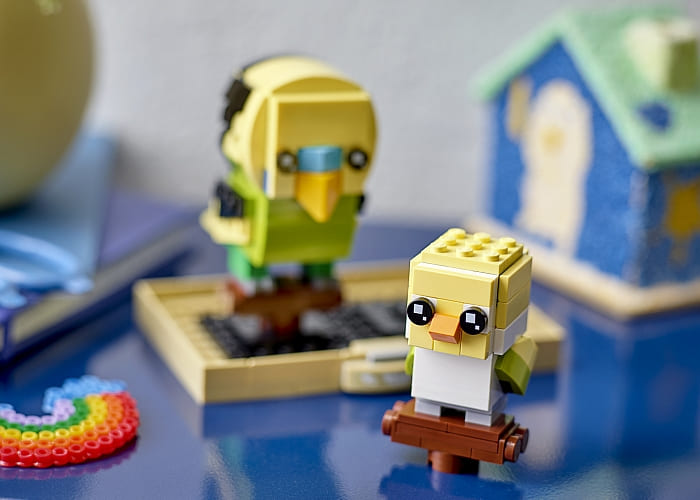 As for the base for the birds, the panels that rim the edges give the impression of a nest or perhaps the bottom of a birdcage. Honestly, if it wasn’t for the little wooden perches, I’d find the base lackluster.

I also want to point out that the baby, which is normally an interesting scaled down version of the larger parent animal in the other LEGO BrickHeadz Pets sets, is a bit plain here. Apart from the angled wings and tail feathers, the chick has very little going on. It’s pretty clear that the large budgie is meant to steal the show here with all the interesting parts and techniques. 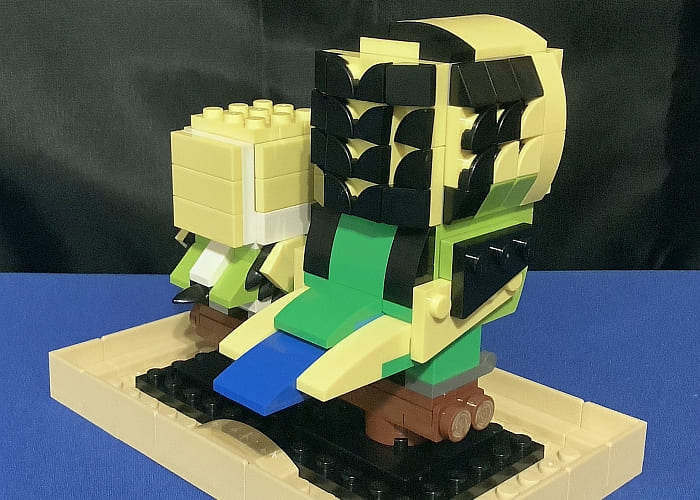 As for recommending the set, this is probably not for most LEGO fans. LEGO BrickHeadz is already a niche, and BrickHeadz Pets are a niche even beyond that. Like I mentioned with the goldfish, unless you are specifically looking for blocky little LEGO birds, I would wait until the set goes on sale. It will be available in March at the LEGO BrickHeadz section of the Online LEGO Shop.

As a huge fan of LEGO Brickheadz, I do like these two LEGO BrickHeadz Pets sets in my collection. They add a bit of variety to spice things up. But even with my bias, I know these aren’t going to be the hottest sets out there. Rather, they are offerings to perhaps entice someone who is not into LEGO, but into pets to give them a try, which is I think one of the hallmarks of the LEGO BrickHeadz Pets line. They are good entry-level sets for people coming from other hobbies. 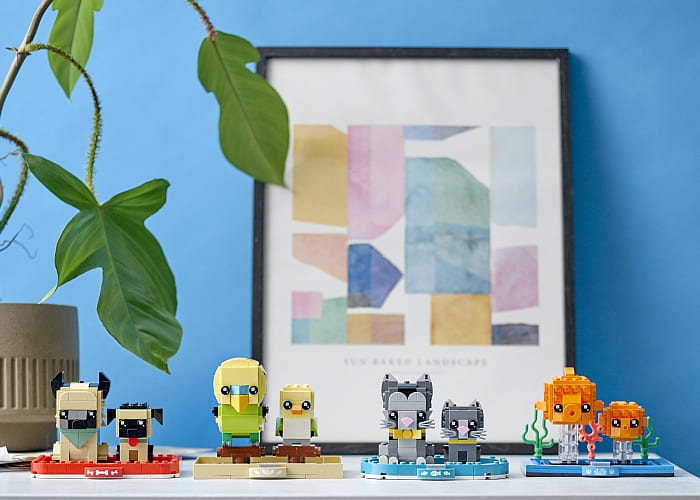 If you’re a LEGO BrickHeadz fans like me, you will probably get this set, but I do have to stress that both builds lacked the true sense of novelty I’m accustomed to with BrickHeadz. The goldfish set, in particular, felt like half of a BrickHeadz character to me with nothing else in the set replacing that void. That’s not to say these are bad sets. Rather, I think it might be wise to have lower expectations before purchasing them. If you want to check them out, they are available at the LEGO BrickHeadz section of the Online LEGO Shop.

After having these LEGO BrickHeadz Pets for a while, I noticed something worth mentioning. Both the fish and the birds are up on stands, with the fish on clear bricks and the birds on round ones. It turns that the round bricks have a bit less clutch-power. Additionally, the birds are heavier than the fish. If you watch my review video, you can see the birds come off the stands when I attempt to show the bottom of the set. I didn’t realize at that time, but this became a regular thing; tilt the set even just a bit, and the birds fall off.

Thanks to the square brick stand and overall lighter weight, you will not have the same issue with the fish. In fact, the transparent bricks seem to have even more clutch power than solid colored bricks due to the slightly different plastic. Given that the majority of LEGO BrickHeadz are very sturdy and solid builds, I felt it was important to point out how delicate the birds are as this might come as an unexpected surprise. I’ve already had a few near misses with the set falling and shattering, and in one instance doing just that, so be careful and handle your birds with care.

What do you think? How do you like the LEGO BrickHeadz Pets collection? Do you collect BrickHeadz? Are you planning to get any of the new sets? Which one is your favorite pet so far? Feel free to share your thoughts and discuss in the comment section below!