The #76188 LEGO Batman Classic TV Series Batmobile is one of the newly released sets that became available a couple of days ago. As I already have a minifig-size classic Batmobile from the #76052 LEGO Batman Classic TV Series Batcave that was released back in 2016, I wasn’t too interested to pick up this set. However, after building it (thank you, LEGO, for sending a review copy), it is now one of my favorite minifig-scale Batmobiles ever. Even when building the Batcave set, my favorite part was the Batmobile, and this new version further improves the design. So, let’s take a closer look at the set and see why it impresses the Bat-pants off of me. 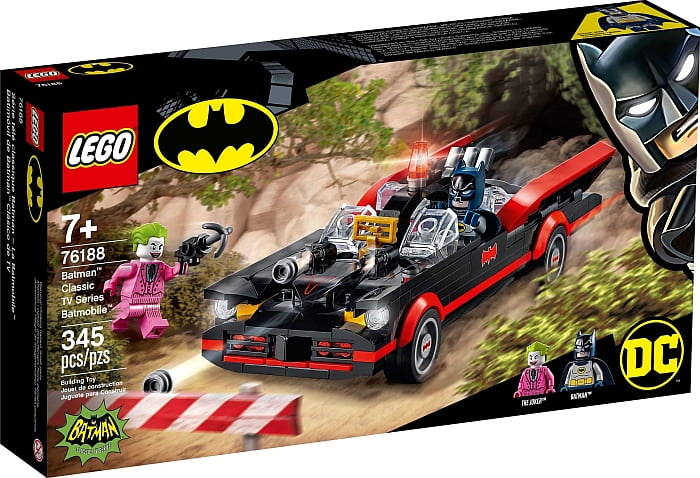 Sadly, I have to report that the new Batmobile comes with stickers. And you have to apply them to some pretty small surfaces. The worst are at the back of the vehicle on two 1×1 tiles. You’ll also need to place them on small slopes that make up the interior dash. However, the dashboard stickers do make you smile. 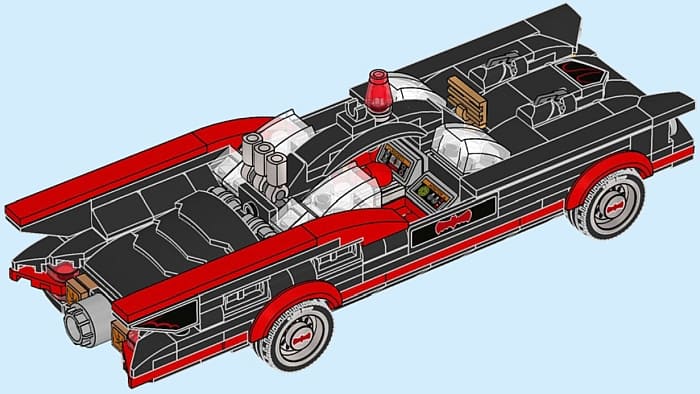 The middle of the dash has a label for a button that says, “Rocket”. And the one next to it has a label that reads, “Monitor”. That’s how kids knew what things were back in the day. Plus, the Batmobile has a massive phone in between the two front seats. Yep, at that time this was the height of technology! Fortunately, most of the other stickers aren’t on such tiny parts. And I was doubly grateful that the small round tiles that make up the hubcaps are printed. 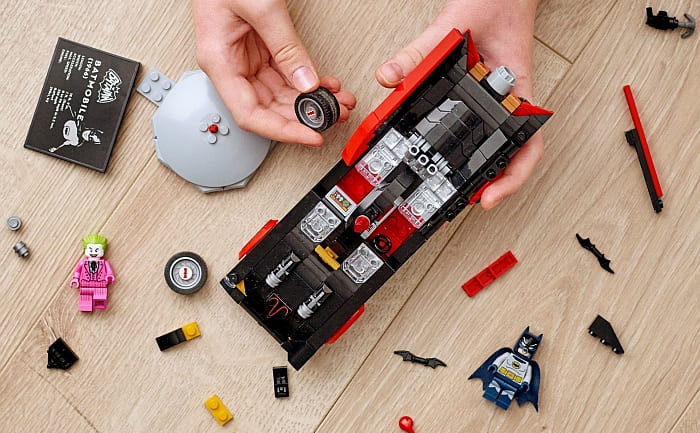 As for updates from the earlier Batcave version of the vehicle, LEGO designers took advantage of all the newer tiny slopes. This allows for much more subtle curves and details for a small scale vehicle. And LEGO designers also did something truly interesting. 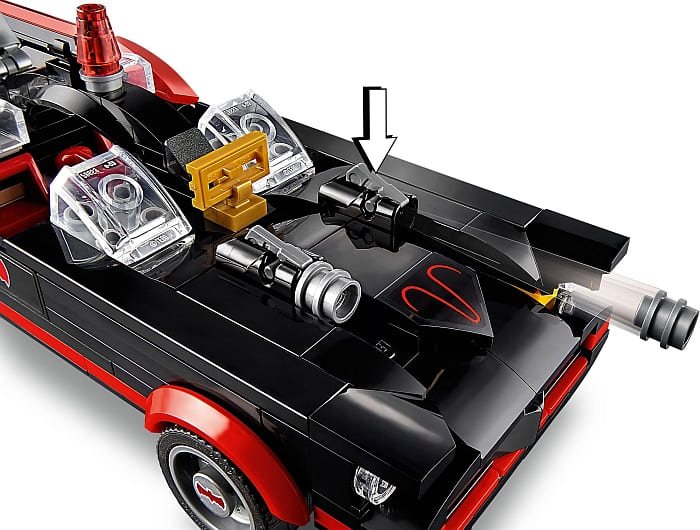 The initial build calls for you to add two stud-shooters in the front of the car. This makes it ideal as a play set. However, as you can imagine, many LEGO fans would love to use this set as a more serious display piece. So, LEGO designers included a few extra parts to replace the shooters with smooth slope sections. Plus, they also added a display turntable with plaque to give the vehicle that nice collector’s feel. 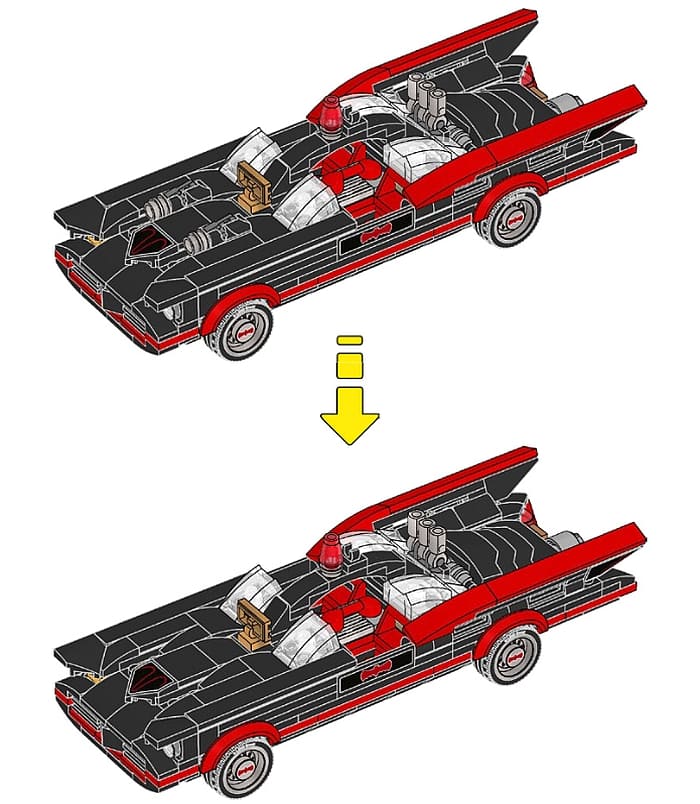 I also appreciate that the Batmobile has a working trunk. And the trunk is large enough to store not only the extra Batarang, but the shooters if you don’t want them attached. Though you may have to turn them sideways and puzzle them into place, but they can fit. 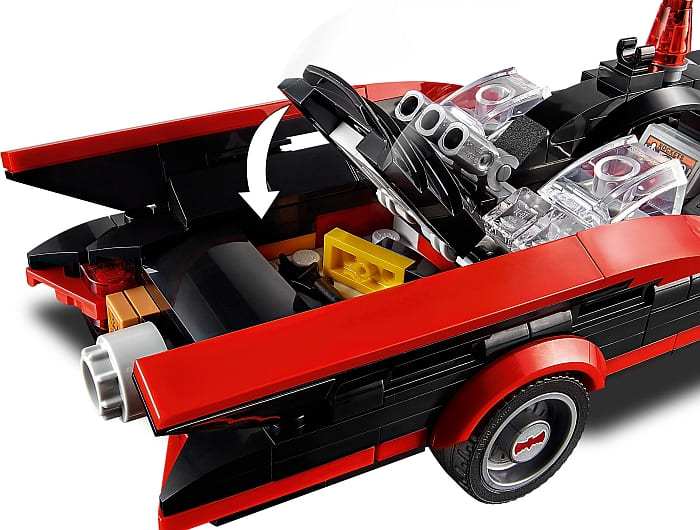 As for the minifigs, you get a classic Batman and Joker. Batman’s cape is the soft cloth type and he does feature front and back printing. Joker also has his unique printing right down to the moustache that the actor refused to shave back in the day. This is just a fantastic way to get your hands on these classic minifigs without breaking the bank. 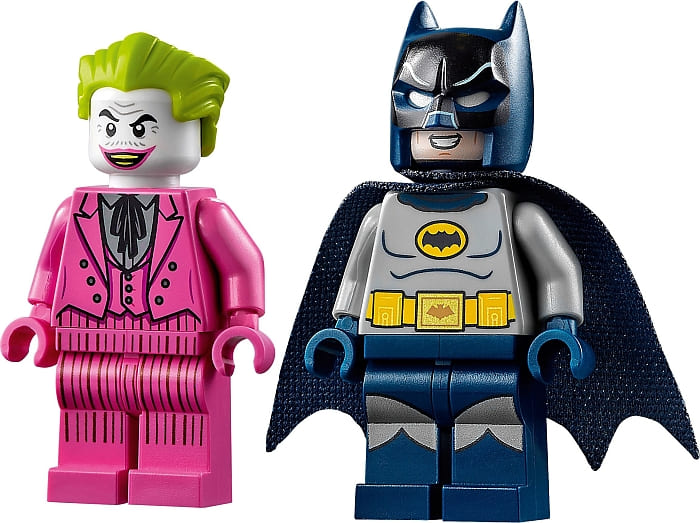 As with most film versions, they tend to have a larger budget and I can say that putting a fair bit of money towards something like the Batmobile is usually money well spent. And this also explains a bit more why I feel this is a better vehicle than the one I originally got. But I do feel the attention to detail really shines in this model – thanks in large part to new elements being available.

I also really appreciate the fact that the #76188 LEGO Batman Classic TV Series Batmobile can be a great play model and a great display piece without extra cost. This is the perfect blending of expert quality with fun play potential. What you end up with is something suited for pretty much any age. In fact, it is a great way to connect generations of family members. The set features characters and a classic vehicle that were beloved in the past, and blending them with modern building techniques and play-features kids love today. In short, it is Bat-tastic! In the video below, I will talk a bit more ab out the set and also show you the features.

The price of the #76188 LEGO Batman Classic TV Series Batmobile is $29.99, which I feel is fair for what you get. If you would like to check it out, it’s available at the LEGO DC Super Heroes section of the Online LEGO Shop. 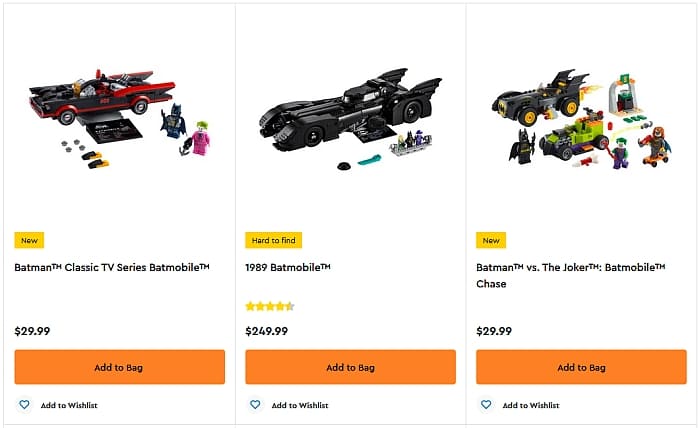 What do you think? Do you have a favorite LEGO Batmobile? And how do you like this latest version? Feel free to share your thoughts and discuss in the comment section below!