We talked about several of the recently released LEGO Monkie Kid sets (see links at the end of this post), but there are a couple of sets we haven’t discussed yet. LEGO Monkie Kid sets mix the Chinese legend of the Monkey King with modern fantasy elements. Thus, we get traditional Asian motifs and characters blended with futuristic mechs, drones, and other vehicles. The sets are creative, imaginative, and visually pleasing, and they have some impressive play-features, and unique elements. 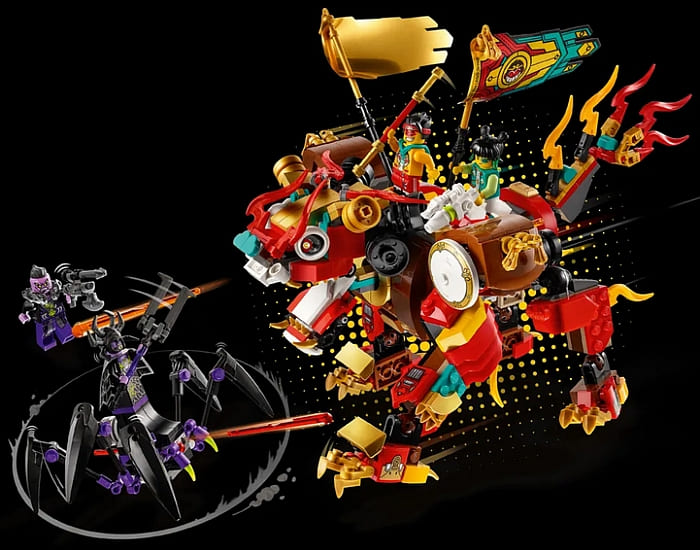 The two sets we will talk about today are the #80021 LEGO Monkie Kid’s Lion Guardian, and the #80022 LEGO Monkie Kid Spider Queen’s Arachnoid Base. Both of these sets prominently feature some of the baddies, ruled by the evil Spider Queen, and have ominous black mechs shaped like spiders. 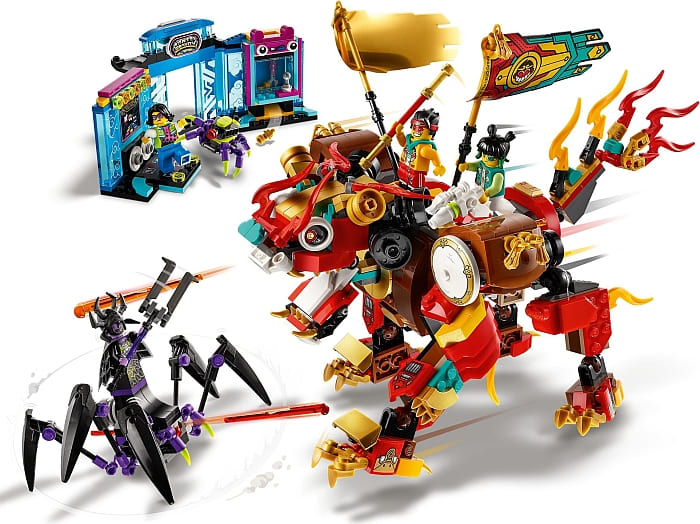 I normally like the Monkie Kid mechs, but I feel like that the design of the Lion Mech is just too messy. We know that LEGO can make excellent brick-built lions and dragons, so I’m not sure why this one went wrong. The black internal frame and mechanical parts showing through are unsightly, and the outer cladding doesn’t look very good either. 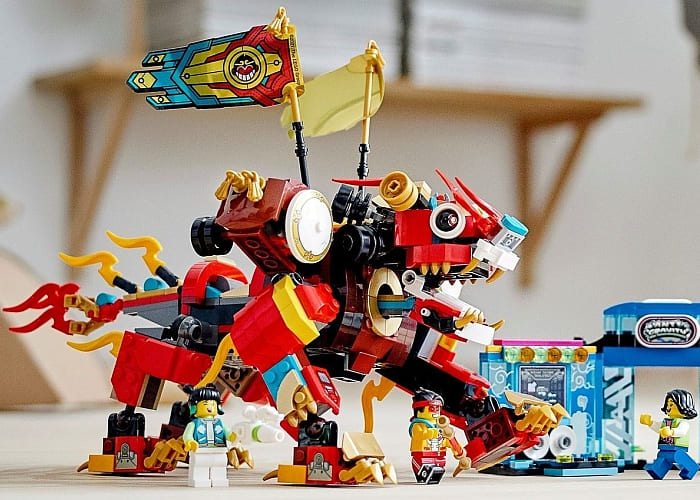 The Spider Queen’s robotic spider looks a lot cleaner in terms of design and I like that they spring-loaded shooters double as the eyes of the spider. Overall, this is a small but fun design. 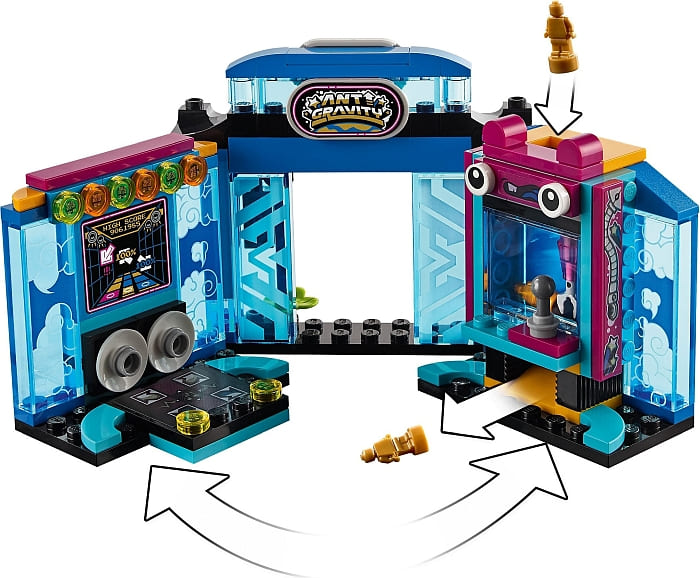 The real attraction of this set though is the arcade with a working toy-grabbing claw game that can actually dispense small pieces. I also like the overall color-scheme of the arcade and that the layout can be changed from open to closed. In the video-review below, you can see how the claw machine works.. 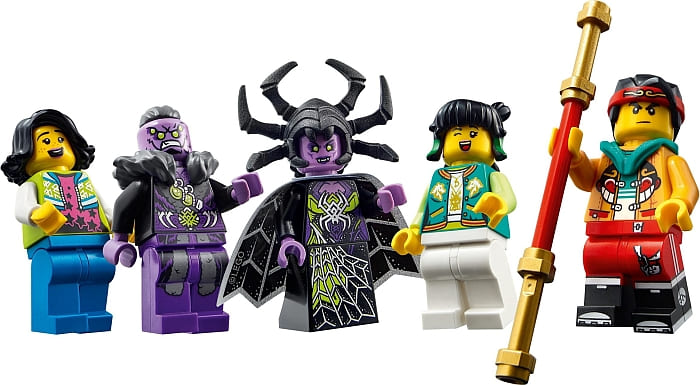 The five minifigs are Monkie Kid in his usual attire and with the Golden Staff, Mei also in her usual attire with the Jade Dragon Blade, Lu who seems to be just a generic civilian, Spider Queen, and a Huntsman. All the minifigs are highly detailed, but you can get them from other sets, except for Lu, who is exclusive to this set.

In summary, this set is probably not worth it to most people, however, some of the design elements could be copied from the instructions for other applications. The arcade is especially nice and could be incorporated into your LEGO city. Even the design of the Spider Queen’s mech could be used as a template for small spider-shaped vehicles. This is a 774 piece set, so the $79.99 doesn’t seem too bad, however when you look at what you get, and how much of it is actually useful, it may not be worth it to you at full price. You can find it at the LEGO Monkie Kid section of the Online LEGO Shop. 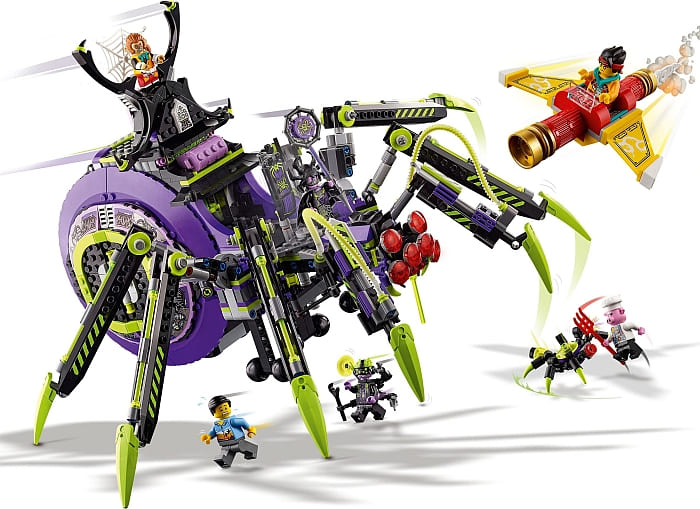 Now, let’s take a look at the enormous #80022 LEGO Monkie Kid Spider Queen’s Arachnoid Base. This set is obviously dedicated to the Spider Queen, and there is very little provided for Monkie Kid and his team. But that’s alright, because the giant spider-shaped mech/HQ is definitely awesome! 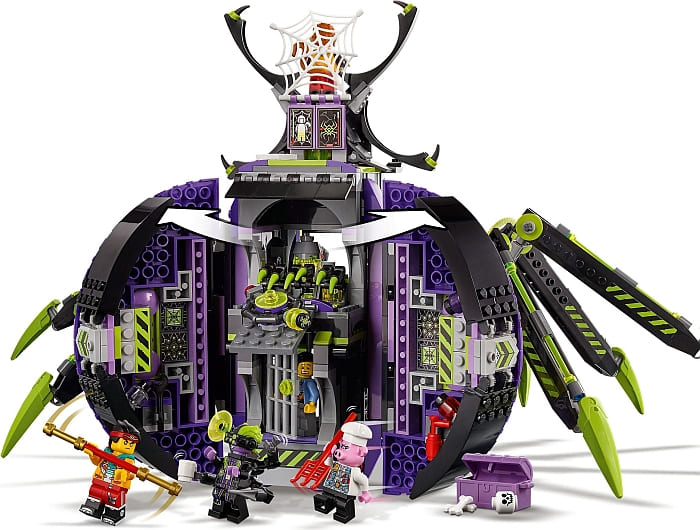 The Spider Mech features lever-operated attack pincers, poseable legs, and the spider’s body (the round section at the back) opens up to reveal a detailed lab and prison.

The overall size is 10 in. (25 cm) high, 13.5 in. (34 cm) long, and 17.5 in. (44 cm) wide, so yeah, it’s big! The color-scheme is also great and the lime-green really pops against the purple and black. You really have to see this spider in action to appreciate the details, so make sure you watch the video-review below. 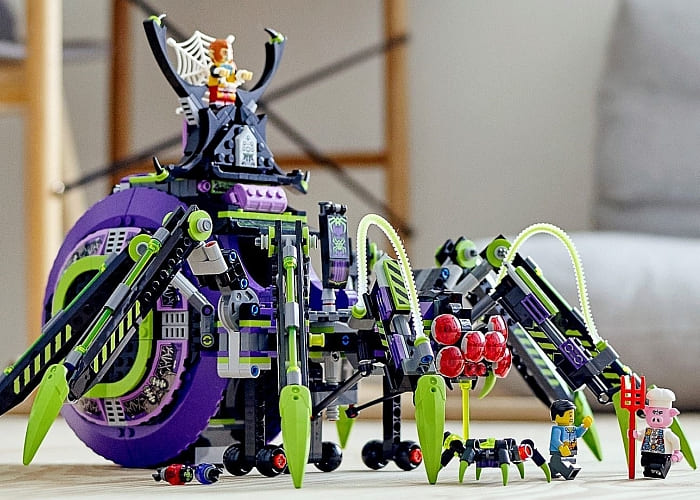 The six minifigs are Spider Queen, Syntax, Monkie Kid, Pigsy, Monkey King, and a generic civilian. They are highly detailed, as usual, especially the Spider Queen. You also get a small robotic spider as well as a tiny flyer for Monkie Kid, but the main highlight of this set is really the mech itself. It’s sturdy, looks great, and full of fun play-functions.

The #80022 LEGO Monkie Kid Spider Queen’s Arachnoid Base comes with 1,170 pieces and the price is $119.99. The price per piece ratio is pretty standard (10 cents), and if you like what you see, it would be worth it at full price or close to full price in my opinion. If you want to check it out, it’s available at the LEGO Monkie Kid section of the Online LEGO Shop.

Next post: Update on the Future of LEGO VIDIYO