Few sets caught my eye as quickly as the #21323 LEGO Ideas Grand Piano did.  Piano has been part of my life since I started taking lessons when I was seven, so as soon as the original LEGO Ideas submission was approved, I put the set on my mental wish list!

You may remember that the piano was under review from LEGO Ideas for a whole extra quarter—and no wonder. The fan designer included so many functions that the LEGO designers were surely wondering if all that would be possible at the durability standards needed for a LEGO set!  But with 3,662 pieces—662 pieces more than the maximum amount allowed for a LEGO Ideas submission—the final set is an incredibly functional LEGO piano! 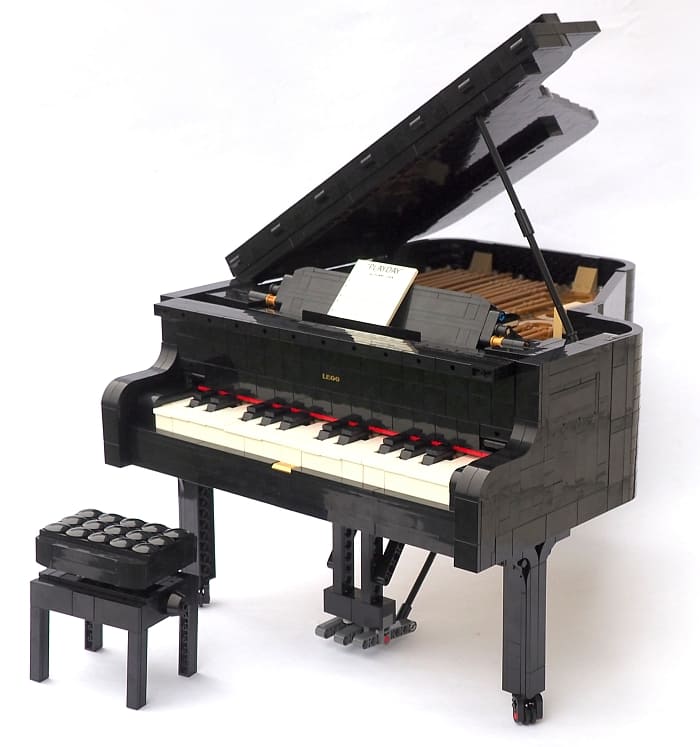 The piano looks beautiful in the fully open position. Once it’s closed, you notice the unrealistic LEGO slopes a little more, especially on the top.  But I live in a dusty area, so I’ll be keeping it closed most of the time. 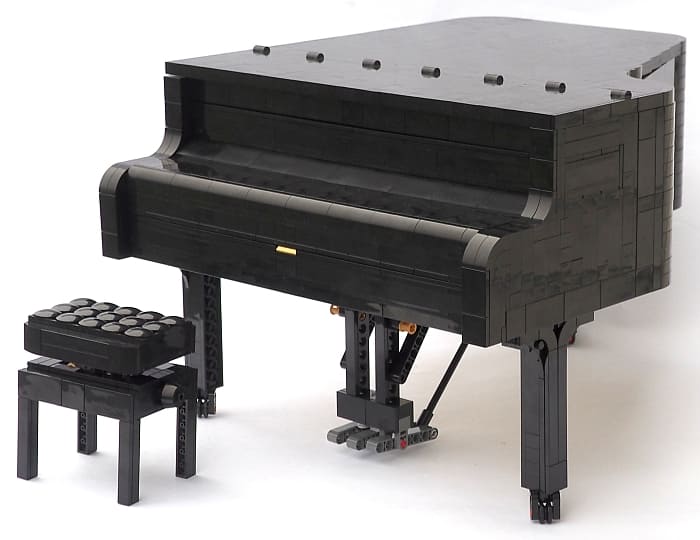 The inside of the piano is of course a little simplified compared to a real one (not nearly as many strings!), but it looks striking and fairly accurate. 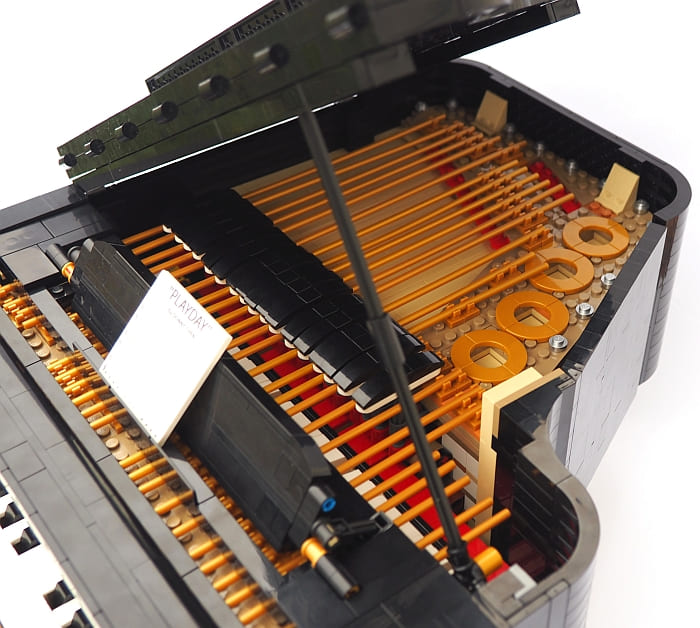 The curves of the piano look realistic, at least to the relatively uneducated eye (I’ve played lots of pianos, but only rarely have I been around a grand). However, there is one oddity that is pretty glaring around the side: the gap at the end of the battery box door panel. 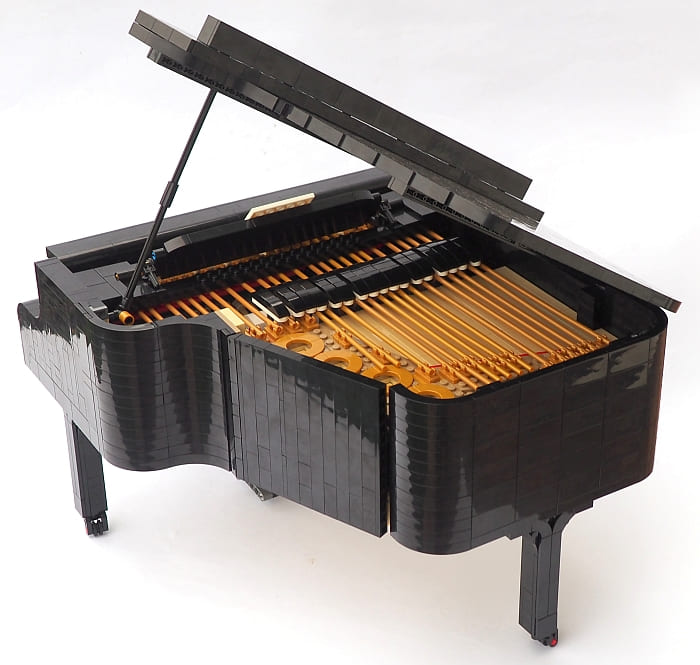 This gap is so easy to fix that I’m surprised it’s there in the first place. Another layer of plates seals it almost perfectly. 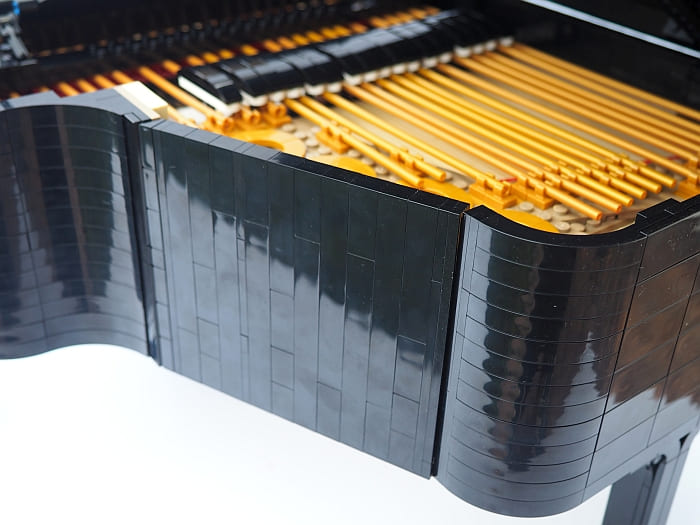 As far as I can tell, this doesn’t stress the elements or anything. Like I said, I can’t figure out why the gap was allowed to remain! 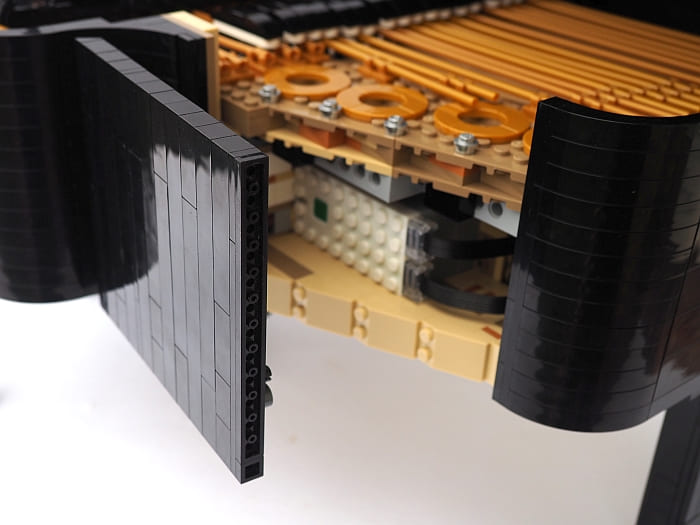 One really neat thing about this set is how visible it is from every perspective—right, left, top, and inside! Not only can you look inside when you open the top, but you can also easily remove the entire keyboard to explore the mechanism.  It’s a great way to learn how a piano works as the keys move the hammers. 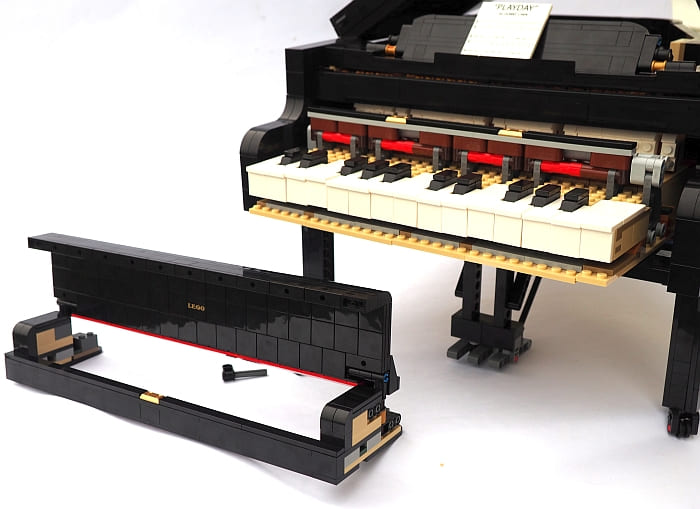 Just like with the battery panel, we’ve got a small issue to correct here too. The keys—especially the middle keys—aren’t perfectly aligned.  The situation can be improved by changing the connection of the middle keys from a clip and bar (left) to a click hinge (right). 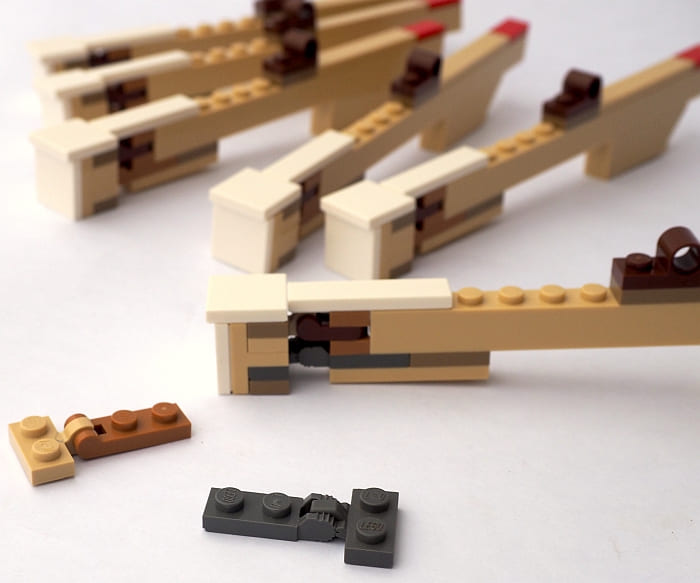 The result is better, but not perfect. This is probably as good as you’re going to get though, given part tolerances and the fact that the keys aren’t actually connected to anything, just resting on their supports. 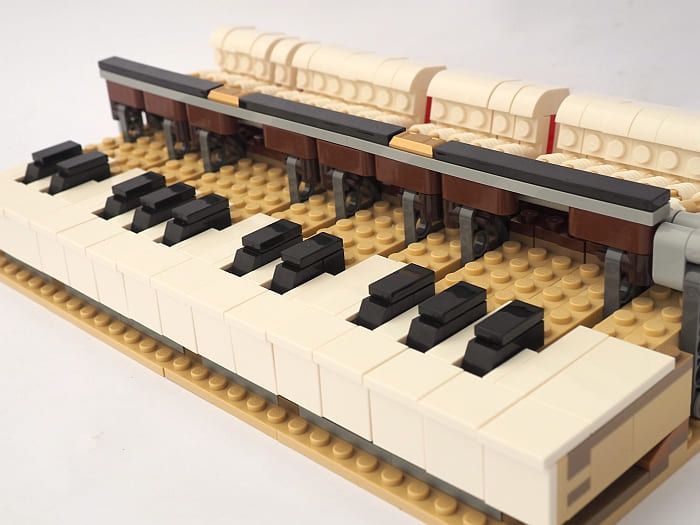 This adjustment for the key alignment was suggested by the fan designer—I found it on Rambling Brick.

Seeing how the keys move the hammers is only seeing half of the functionality though—and fortunately, the music-rest also comes off easily so you can see the next step of the process. The hammers strike the strings while the dampers (which rests on top of the strings) rise to allow the strings to vibrate—in theory. Of course the LEGO tube doesn’t vibrate! 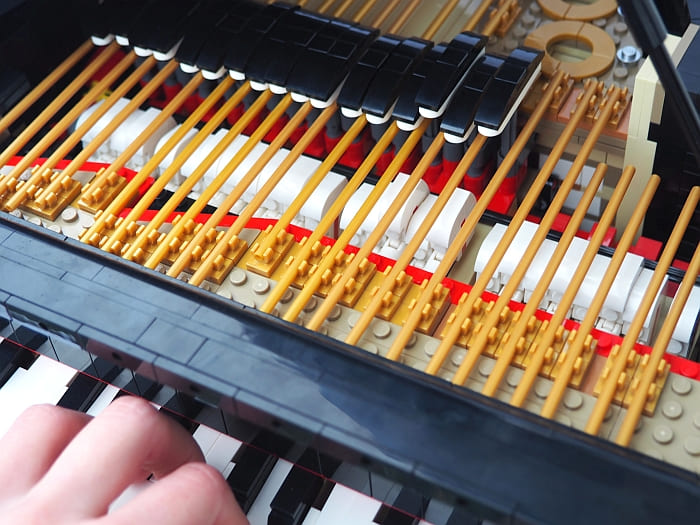 The building process is pretty interesting, since there are a lot of sideways techniques and interlocking sections to keep it all firmly together. I put together a time lapse of the process so you can get a closer look at the innards of the piano!

The next thing to talk about is how big the piano is! It’s over a foot in every direction. 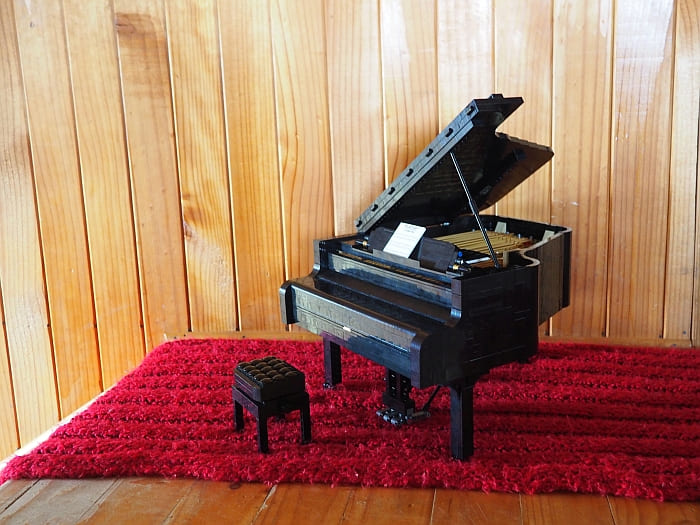 Despite the size, it only has two octaves, or sixteen white keys. That makes sense, since smaller keys would be hard to play.  Even these keys are a bit of a tight fit.  My fingers are small though, so I can play the keys sequentially without much trouble.  And although I can only comfortably stretch an octave on a real piano, on the LEGO piano I can easily stretch an octave and three! 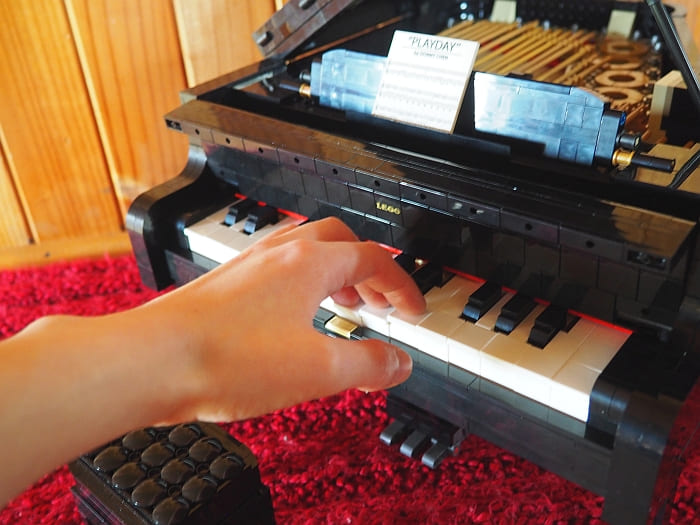 Now let’s get a feel for the size with a minifigure for scale, taking a comfortable stroll down the keyboard. 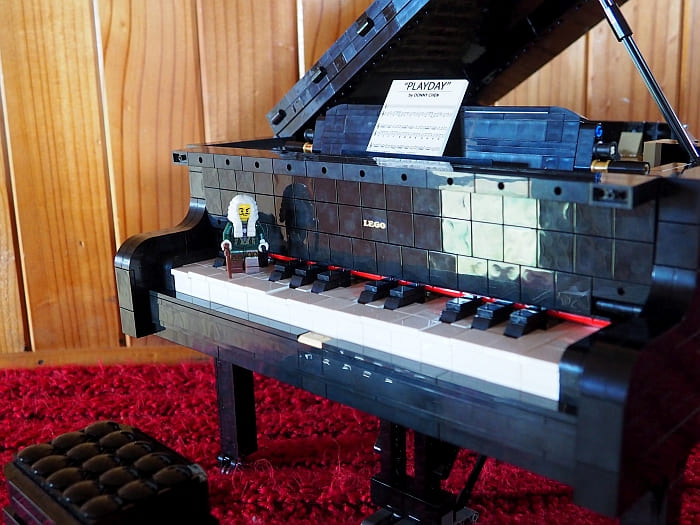 He looks completely lost on this big seat! 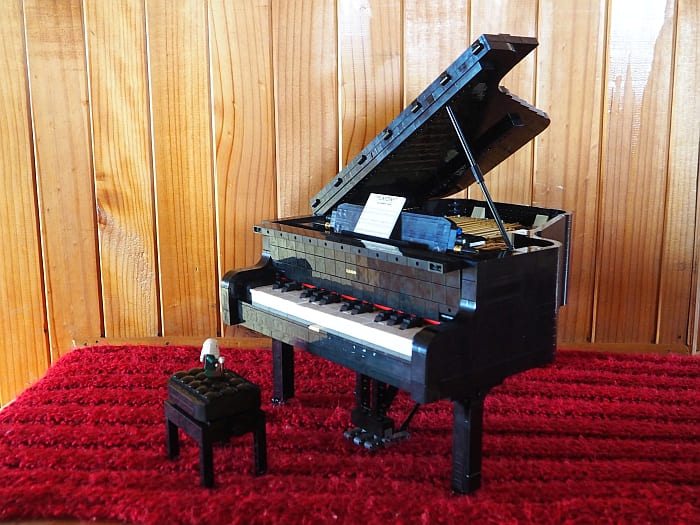 Where to display such a big set? I had a shelf ready, but it turned out to be a little small.  The piano fit, but there was no room to angle it artistically.  Next I tried my night table, but the piano dwarfed the table.  So I went for a DIY solution.  The hardest part was clearing the top of the bookshelf.  That done, I found a plastic board to lay on top of the shelf and make it wider.  Although it overhangs a bit, the weight of the piano keeps it securely in place.  On top of the plastic, I draped a red scarf to give it a bit of elegance.  I think it fits right in next to my Ninjago corner! 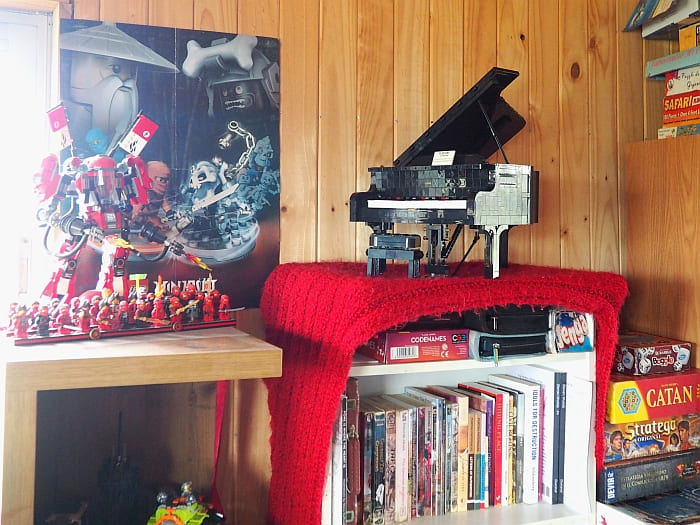 With the set securely on display, we’ve still only scratched the surface. There’s a whole lot of functionality to explore—so much, in fact, that I’m going to leave the functions for a second article.  In the meantime, you can find the Grand Piano at the LEGO Ideas section of the LEGO Shop.

So what do you think about the LEGO Ideas Grand Piano? Do you think it makes an impressive display piece?  How did the designers do at getting the shape right?  Feel free to leave your thoughts in the comment section below!

Next post: LEGO Comic Creator – Create Your Own Comic!

Previous post: Update on the Future of LEGO VIDIYO