LEGO Star Wars fans are in for a treat as the LEGO Group and Lucasfilm have unveiled three new sets to celebrate Obi-Wan Wednesdays, weekly reveals of new toys, apparel, and more inspired by the Disney+ limited series. To inspire Jedi-minded fans and those looking to support the Dark Side, these three new sets depicting some of Obi-Wan’s greatest adventures from across his galactic journeys are sure to provide hours of fun and play with favorite characters like Obi-Wan Kenobi, Taun We, R4-P1, Grand Inquisitor, Reva (Third Sister Inquisitor), Fifth Brother Inquisitor, and more! 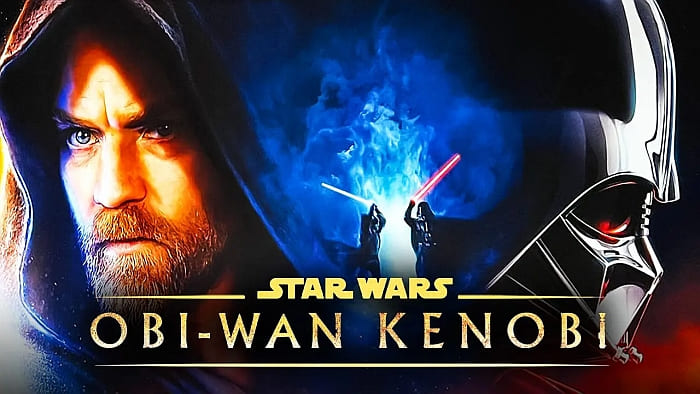 But first, let’s talk about the new series. The story begins 10 years after the dramatic events of “Star Wars: Revenge of the Sith” where Obi-Wan Kenobi faced his greatest defeat—the downfall and corruption of his best friend and Jedi apprentice, Anakin Skywalker, who turned to the dark side as evil Sith Lord Darth Vader. The series stars Ewan McGregor, reprising his role as the iconic Jedi Master, and also marks the return of Hayden Christensen in the role of Darth Vader. Joining the cast are Moses Ingram, Joel Edgerton, Bonnie Piesse, Kumail Nanjiani, Indira Varma, Rupert Friend, O’Shea Jackson Jr., Sung Kang, Simone Kessell, and Benny Safdie. “Obi-Wan Kenobi” is directed by Deborah Chow and executive-produced by Kathleen Kennedy, Michelle Rejwan, Deborah Chow, Ewan McGregor, and Joby Harold. You can watch the trailer below.

#75333 LEGO Star Wars Obi-Wan Kenobi’s Jedi Starfighter – All aboard Obi-Wan Kenobi’s Jedi Starfighter, inspired by its appearance in Star Wars: Attack of the Clones! With Obi-Wan in the cockpit and his trusty astromech droid R4-P17 on the wing, travel to Kamino, beyond the Outer Rim. Fire the stud-shooters at any enemy starships that get in your way. Land on the water world of Kamino to be greeted by Taun We. Your meeting could change the course of the Clone Wars! Prices are as follows: 34.99 EUR/ 49.99 AUD/ 29.99 GBP/29.99 USD/39.99 CAD . The set will be available from August 1st, but you can pre-order it today at the LEGO Star Wars section of the Online LEGO Shop. 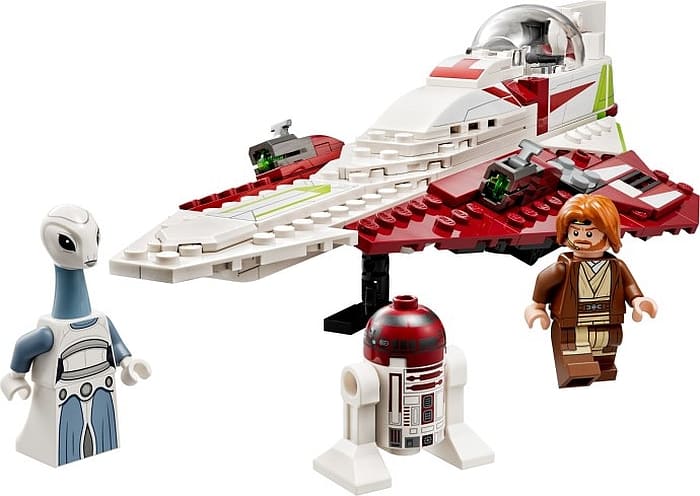 #75336 LEGO Star Wars Inquisitor Transport Scythe – Construct and play out the dark side of the Force with The Inquisitor Transport Scythe! Reva, the Grand Inquisitor, and the Fifth Brother are on board for a sinister mission. Flip down the wings for flight mode and fire the spring-loaded shooters. On landing, lower the ramp and prepare for battle. Can Obi-Wan Kenobi elude the Inquisitors with their double-bladed lightsabers? This set is inspired by the new Star Wars series, Obi-Wan Kenobi, streaming exclusively on Disney+. Prices are as follows: 99.99 EUR/159.99 AUD/ 89.99 GBP/99.99 USD/129.99 CAD. The set will be available from August 1st, but you can pre-order it today at the LEGO Star Wars section of the Online LEGO Shop.

#40547 LEGO BrickHeadz Star Wars Obi-Wan Kenobi & Darth Vader – Fans can relive dramatic scenes from the Star Wars series Obi-Wan Kenobi as they build LEGO BrickHeadz versions of iconic characters Obi-Wan Kenobi and Darth Vader – the Force is strong with this duo! The products capture authentic details including Darth Vader’s red eyes and a lightsaber for each buildable LEGO brick figure, plus baseplates for display. This creative building toy is suitable for ages 10 and up and would make an awesome addition to any Star Wars fan’s collection. Prices are as follows: 19.99 EUR/29.99 AUD/ 17.99 GBP/ 19.99 USD/24.99 CAD. The set will be available from August 1st, but you can pre-order it today at the LEGO Star Wars section of the Online LEGO Shop. 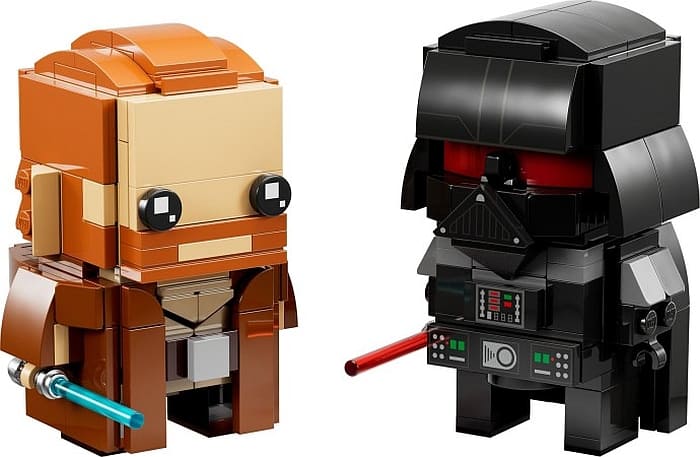 Another new LEGO Star Wars set available for pre-order is the #75335 LEGO Star Wars BD-1 droid from the Star Wars Jedi: Fallen Order video-game. The head of this posable brick-built model can be tilted back, forward, and sideways for maximum cuteness. Fans will be delighted by other authentic details, such as the translucent elements on the back of the head that indicate BD-1’s mood, plus a compartment for stim canister elements. An information sign and a BD-1 LEGO figure that can be attached next to the sign complete a charming centerpiece. The price is $99.99 and you can pre-order the set at the LEGO Star Wars section of the Online LEGO Shop. 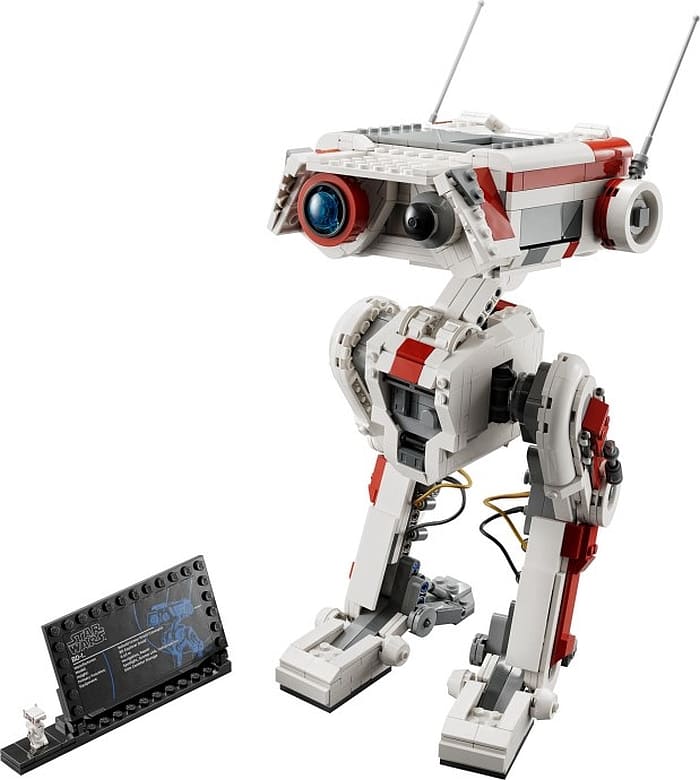 The #75338 LEGO Star Wars Ambush on Ferrix is based on the upcoming Star Wars: Andor television series scheduled to be released in August of this year. It is a prequel to the Star Wars film Rogue One, following the character Cassian Andor during the five years before the events of the film. The LEGO set features a Mobile Tac-Pod with an opening top and side for easy access to the detailed interior, adjustable wings for flight and landing modes, and a rotating double stud-shooter, plus a speeder bike for Cassian Andor and Luthen Rael to ride on. There are three minifigures, each with a blaster pistol for battle play. This set is $69.99 and you can pre-order it at the LEGO Star Wars section of the Online LEGO Shop. 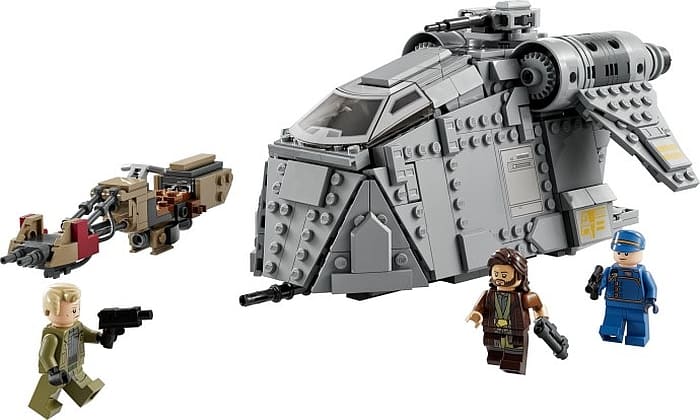 What do you think? How do you like the upcoming LEGO Star Wars sets? And do you watch the new Star Wars series? Feel free to share and discuss in the comment section below! 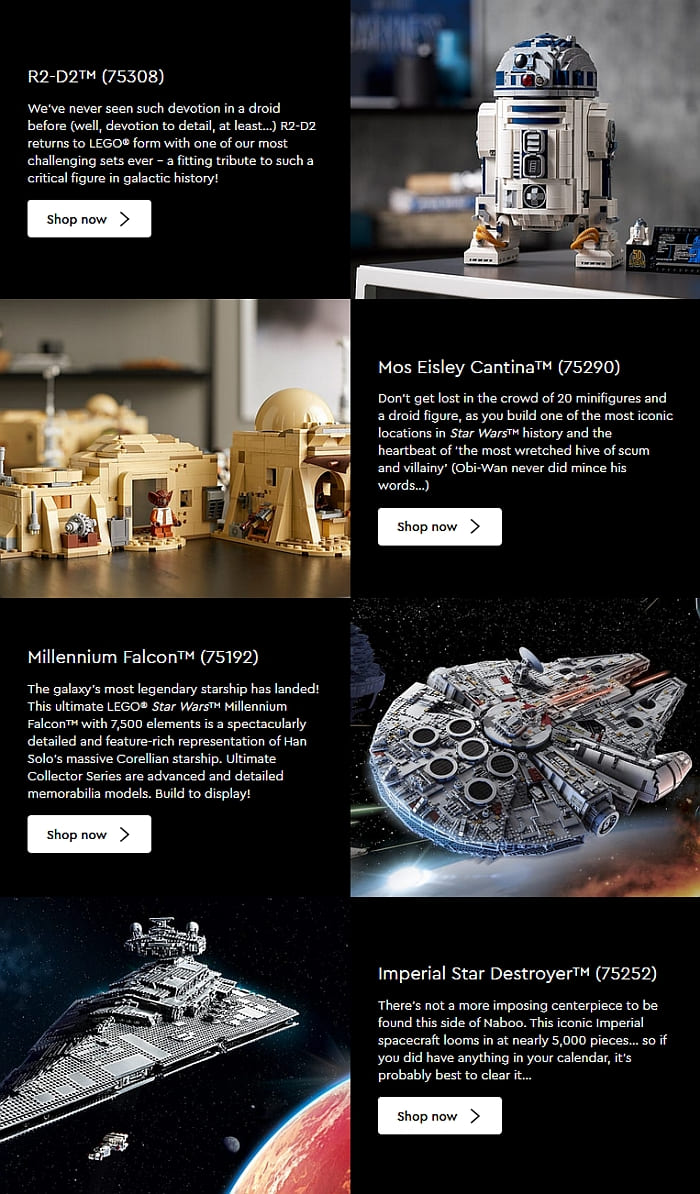