When the #21332 LEGO Ideas The Globe set was announced, I was rather excited. It seemed like a difficult object to build and having a chance to experience how LEGO designers tackled the challenge seemed fascinating. Then I saw the price and had to slow my excitement. Considering the set costs more than a normal globe quite a few times over, it is hard to recommend. Additionally, I didn’t see many people talking about this set when it came out. So, when I had an opportunity to ask for something to review, this was one of the top sets on my list. And I have to admit it is rather impressive. 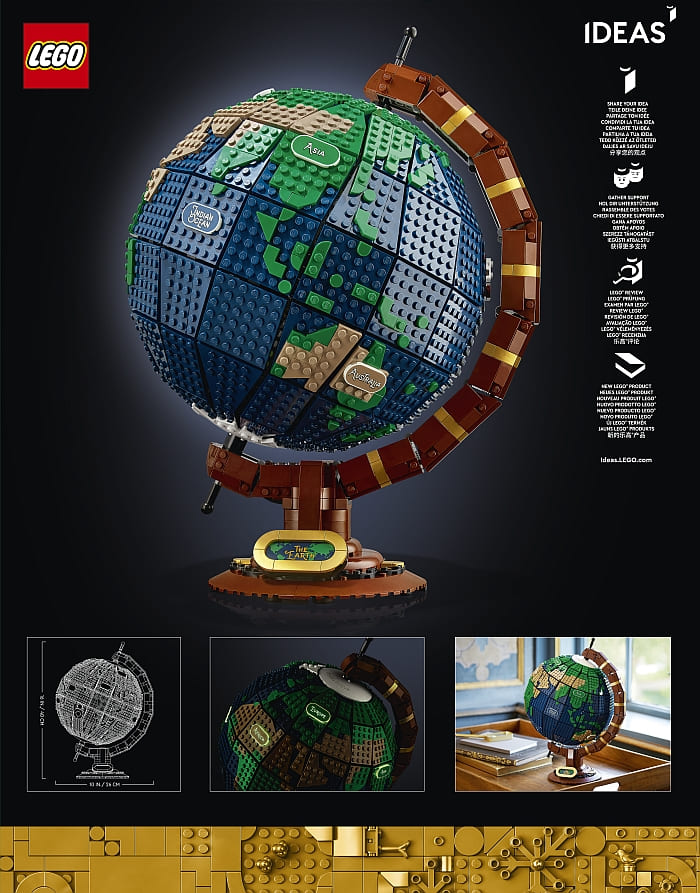 The building experience is quite interesting and I even ran into building techniques I have never seen before. And the finished model is actually larger than I was expecting. However, it is not an actually useful globe, and it is only okay when looking at it up-close. So all in all, as much as I liked the building experience, $229.99 is a high price to pay for a display model and potential conversation piece. Having said that, let’s talk about some of the most interesting building techniques found in this set.

Some LEGO fans who looked over the instructions of the set noticed an odd selection of parts located inside the globe. These parts in question were a series of four tires. The obvious question is, why are they there? It was especially curious since they were only on one side of the globe’s inner support structure. 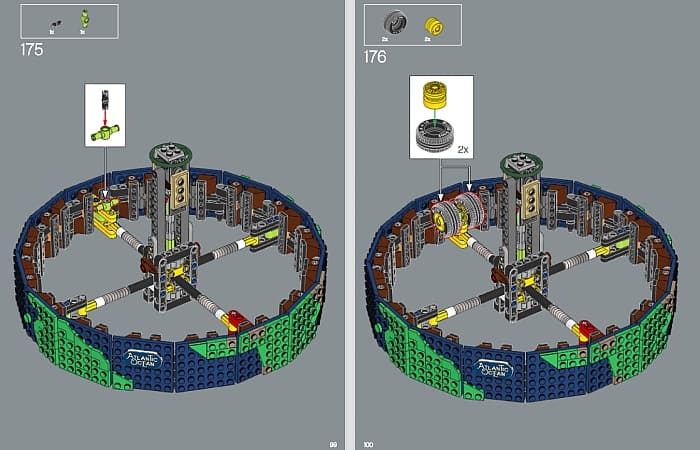 The simple answer is ballast. Ballast is a fancy way to say, additional weight. The difference between saying weight and ballast have to do with the fact that ballast means the weight serves some sort of purpose. Many of LEGO’s boats that could float include a weighted brick. This form of ballast keeps the bottom of the boat down and helps prevent it from tipping over. Many of the crane sets also have a counterweight to offset the boom arm of the crane from tipping the machine over. In this instance though, the tires in the globe are meant to help with rotation.

One of the first things we do when we get our hands on a globe is to turn it – or rather, spin it – because it’s fun to do. Well, what happens when you have a big LEGO model with roughly evenly distributed weight? It will turn, but chances are the friction of the model means it won’t really spin. However, if you add a weight on one end, it allows for centripetal force to be exerted on the ballast weight. In other words, it builds up a bit more momentum and helps to overcome the friction in the model.

Most objects that spin on their own will play with weight in some way, shape, or form. A toy top, for instance, usually flares out at the bottom to lower its center of gravity. You might also notice that if you take a piece of string and try twirling it in a circle, it is not as easy as when you tie something with a little weight on the end of the string.

In order to use this technique in your own builds, you must cover a few bases. First, try adding weight to the farthest point of whatever you are spinning. The farther out you are, the less weight you have to add, making it easier to build. Next, the lower the weight is, the more effective it will be at making the object spin. It is in the middle of the globe because of structural integrity and the center ring is farther out than any other part of the globe. And finally, if your intention is to make the object spin, you most likely only need weight on one side. This will allow for less competition for the momentum the ballast weight is trying to exert.

Over the years, I’ve built a number of spherical shapes with LEGO parts. In those cases, the build process was fairly straightforward. Start by building a box, then add shaped panels on each side to give the illusion of a sphere. The #75187 LEGO Star Wars BB-8 statue is a great example of this technique. However, this wouldn’t work for the globe. 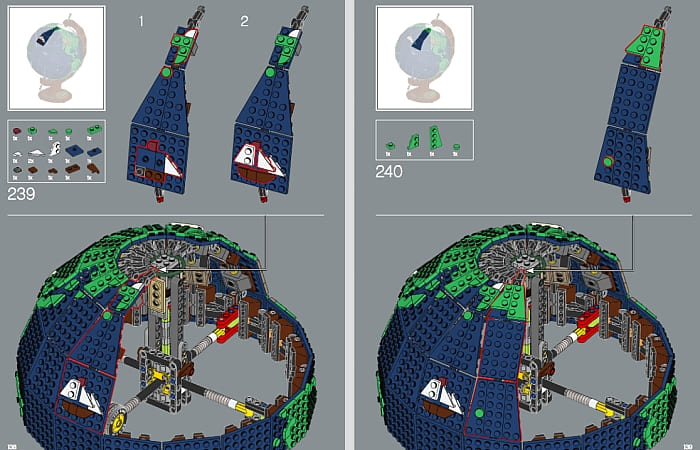 The main reason is that given its size, the end result would be way too heavy. In addition, it would be hard to decorate such a globe with continents and the like. So, I was very excited to see a method to build a hollow spherical shape.

Everything is done using a LEGO Technic frame. The equator is built using 16 paneled segments. Four of these panels are then tied into a central core to help maintain proper shape. From there you build 32 curved panel segments to form the top and bottom domed sections of the globe. And here’s the brilliant part; the 32 curved panel sections come in two types. This means you have 16 of one type and 16 of the other type. 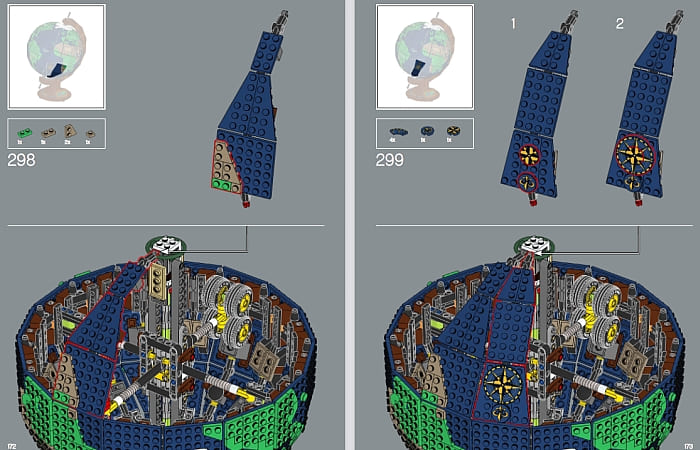 The panels need to be shaped differently since, as you move up the globe, the space becomes smaller. To compensate for this, each panel alternates between being a rectangular shape and a more angled rhombus shape. That means to the left and right of each rectangle is an angled wedge and vice versa. Then the panels alternate between which one is angled versus which one has straight lines.

By going back and forth like this breaks up how distinct the small gaps are in the model. Additionally, since all of these rectangles and rhombuses are made using basic plates and wedges, you end up with a studded surface you can easily add plates to for the continents.

So, the question is, how do you use this technique? Well, this is where I have to point out the importance of geometry. LEGO designers managed to work out the best angled connector to work with the right size of panel. That would be the best way to do it right the first time. But since LEGO bricks are meant to be a fun experience, my suggestion is to take inspiration from how the designer alternated between angled and straight panels. This should result in some very interesting shapes.

I was amazed by how many points in this model are reinforced. From the core of the globe to the curved arm on the stand, everything is reinforced. Even though different parts are used in each section, there is one common methodology behind each point of reinforcement. 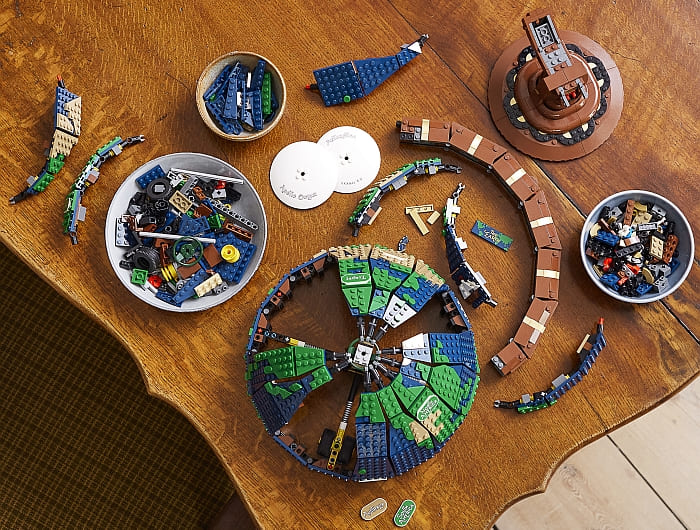 This methodology has to do with the idea of using parts in a different orientation to create geometric locks. Let’s start simple and look at a section of the curved arm of the stand. It has a solid core that is built upright, but then brackets are on each side of the arm. Parts added to the bracket face lock the stacked parts together. This now means in order to un-stack the original pieces, you’d need to break the parts on the side since their geometric shape does not allow for movement in that direction.

This concept is taken to an extreme for the interior core of the globe. In fact, the connections aren’t all that tight inside the globe. However, LEGO designers managed to create a virtual puzzle box with the parts. It will take some serious thought just to figure out which part you can remove first since most of the pieces block the movement of other parts very effectively.

The easiest way to apply this technique in your own models is to try to find different orientations for your parts when securing them together. By attaching parts that are oriented in different directions, they will often naturally form a geometric lock. Of course, you may not always need a creation so secure. But if you are finding your creation has a lot of weight, you may want to consider reinforcing it in this manner.

LEGO GLOBE – APPLYING WHAT YOU LEARN

Weight is something we don’t really consider too much if we’re building something stationary. However, those who build a lot of vehicles might have a better grasp on the subject of ballast. Primarily, they’ll try to get most of the weight centered on their vehicles to make them handle better. But if you ever plan to have any of your creations move in any way, understanding the importance of ballast will aid you greatly. 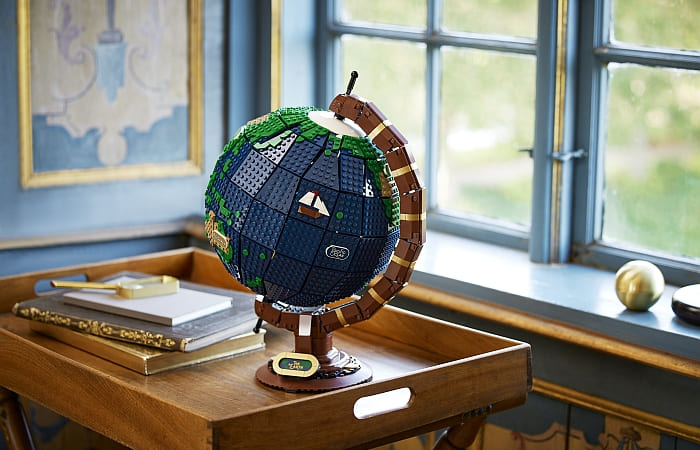 Additionally, some parts like tires, work well for this purpose since they are, by their own design, made to be denser than other elements. Stacking lots of plates together can also be a method to achieve ballast since stacked plates will weigh more than bricks when sandwiched together. Finding where that ballast needs to be will all depend on what you’re trying to accomplish.

Much of this set revolves around smart geometry. The real takeaway here is how to go about playing with elements that will create interesting shapes. Alternating between straight and angled wedges is a fantastic way to experiment with the types of shapes you can achieve, even if you are not trying to build a sphere. And your creation doesn’t need to have a LEGO Technic frame. Simply find your favorite hinge or angled element and you have the perfect foundation to play with wedges.

As for reinforcing methodology, this is what builders graduate up to after they master the art of interlocking. Finding ways to secure parts in multiple directions is not the most intuitive of skills to develop. However, as you experiment, you can find that these sorts of connections can make designs possible that are otherwise too brittle with more conventional building techniques.

I’d recommend playing with brackets first if you would like to try this technique. They are the most familiar for those that build primarily with LEGO System and not LEGO Technic elements. Of course, bricks with studs on their sides have also seen many more options appear, so those may also be great to start out with. When you’re ready for more, explore hinges and the occasional LEGO Technic piece.

In the end, LEGO Technic is the best system for securing elements together in unconventional ways. It is a bit tough to jump into from LEGO System since the variations of LEGO Technic elements are rather broad. This is due to the need for them to be functional elements. This means more specialized features creep into its library of parts.

Ultimately, learning to build in multiple directions will help in preventing a number of headaches. You’ll have much sturdier constructions while using fewer parts. This gives much more room for decorating which is always fun to be able to do. In the video below, I discuss the set in a bit more detail.

If you would like to take a look at the #21332 LEGO Ideas The Globe set, it’s available at the LEGO Ideas section of the Online LEGO Shop. 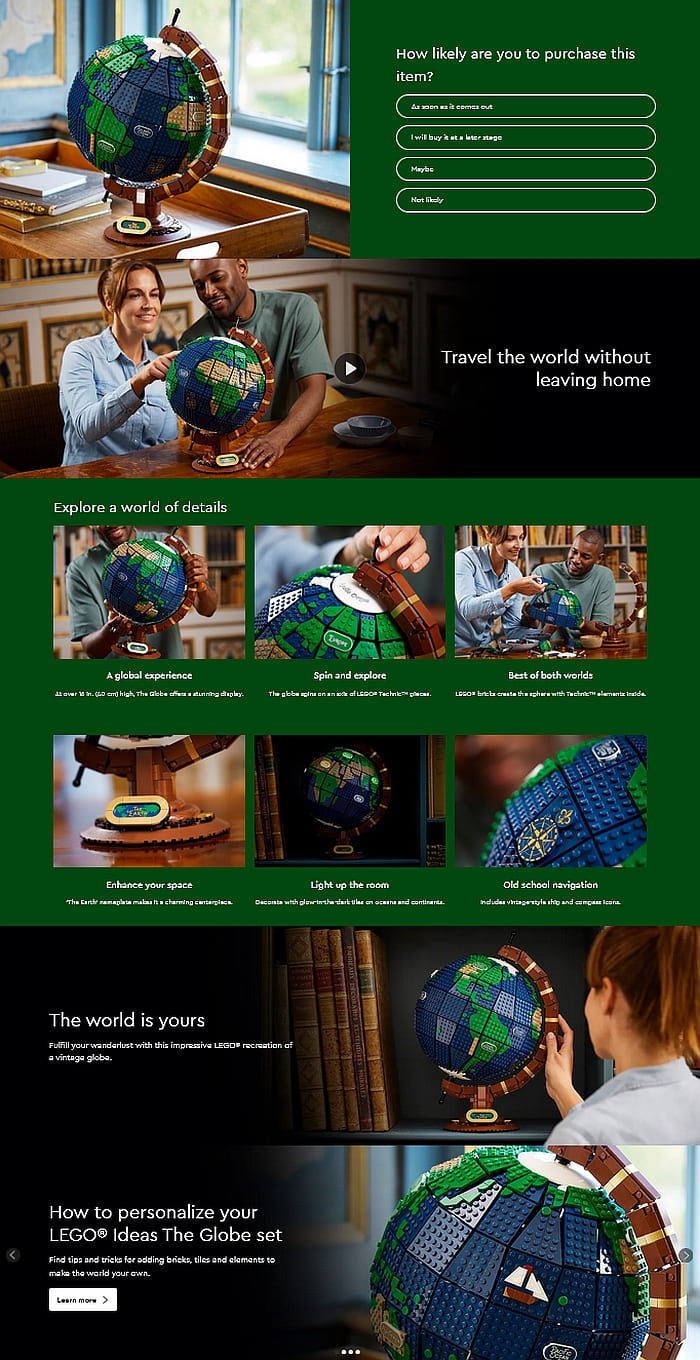 What do you think? How do you like the LEGO Ideas Globe set? And what do you think of the techniques we discussed? If you already built the set yourself, are there any other interesting techniques that you noticed? Feel free to share and discuss in the comment section below!