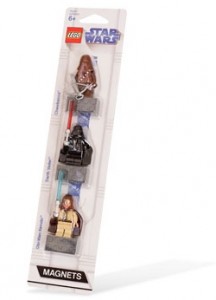 Due to reader requests and comments in response to the Glued Magnet Minifig Removal tutorial, I created this guide to LEGO magnets. This is especially relevant because you can still find both glued and- no-glued versions at LEGO’s Online Shop, LEGO stores and other retail outlets. I hope this will help you selecting the magnets that you want without disappointing surprises.

LEGO started releasing magnets in the early 2000s. These were regular LEGO bricks with a magnet inside. They came in various sizes, with 2x4s being the most common. 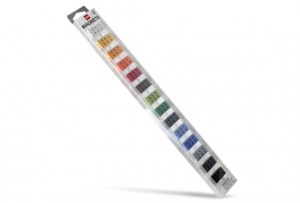 In 2005 LEGO added packets with 3 special LEGO minifigs with little magnets inside both legs to stick to metal surfaces. The parts of the minifigs are glued together so they can function as refrigerator magnets and such, without falling apart. You may be able to find these first-edition magnet minifigs on eBay or Bricklink.

In 2009 LEGO switched over to different type of minifigure magnet-sets; these were regular minifigures in every way, but standing on a special magnetized brick-base. The minifigs themselves are not magnetized, nor are their parts glued together. 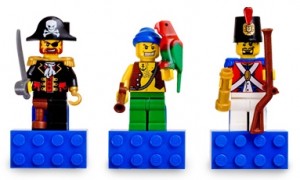 LEGO collectors rejoiced as magnet-sets became a cheap way to get otherwise rare and unique minifigures. 😀 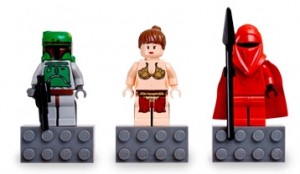 Although these minifigures are perfectly normal, there have been reports of the earliest versions being lesser quality due to being produced in China. (Here is a detailed comparison from Chris “wunztwice” – the minifig on the left is from a magnet-set, the minifig on the right is from a regular LEGO set. Click on the picture for more details.) 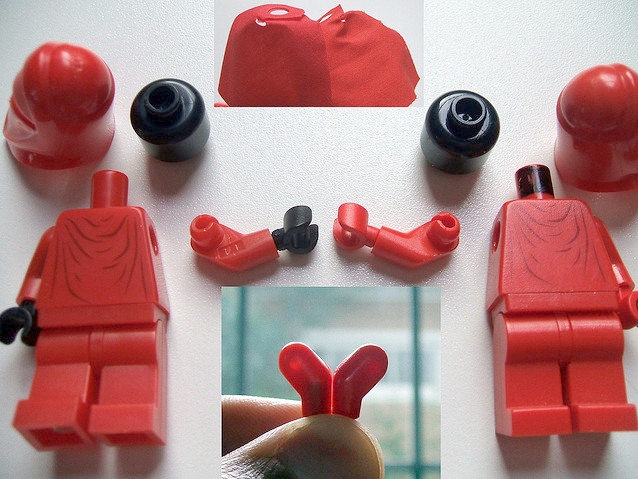 LEGO has responded to customer complaints and by 2010 the magnet minifigs had the same high quality as regular minifigures. LEGO-fans were happy, but unfortunately not too long. 🙁 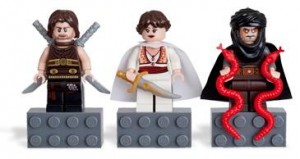 Due to licensing issues (read more here) LEGO started gluing the minifigures to the magnet bases in early 2011. In addition the torsos and legs of the minifigures are now glued together – although heads, head-gear and accessories remain removable. 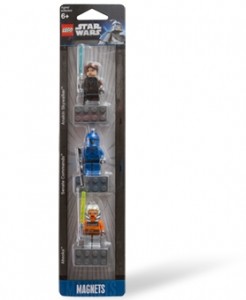 This has been the most confusing time-period for LEGO-fans as the packaging and general look of glued magnet-sets is almost identical to the earlier non-glued version. To add to the confusion, currently LEGO’s online shop, LEGO stores and retail outlets carry both versions! And to make matters worse the item number on the glued re-release of earlier non-glued sets is the same as before! Many shoppers have been greatly disappointed by this experience. 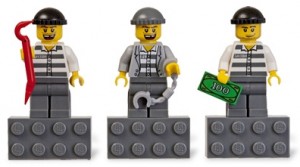 As a response I have tested numerous methods to remove glued minifigs from their magnet bases and came up with a workable solution. (Read here: Glued Magnet Minifig Removal) 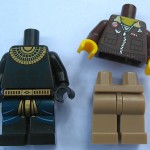 Also, please note that although the 2011 minifig-magnet packages are very similiar to earlier releases, the package does state on the back that “LEGO elements are glued together”. (Please see picture below  – you may click on the image for a larger view.) Therefore the best solution is to ALWAYS CHECK THE BACK OF THE PACKAGING! ❗ 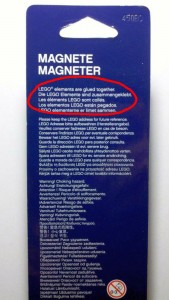 You check the packaging at retail outlets, however if you are shopping online you won’t know which version online shops have in stock.  So to help shoppers identify what they are buying I have put together the following list of 2009-2011 LEGO minifigure magnet sets currently available

➡ NON-GLUED MINIFIGURE MAGNET SETS (2009 releases):
These sets were all released two years ago and there is no evidence of them having a glued re-release. They are most likely no longer available at retail stores, but you should be able to find them on eBay or Bricklink. If you do find them they should be non-glued.

➡ GLUED MINIFIGURE MAGNET SETS (2009 re-releases):
Although you may find non-glued versions of these sets on sites like eBay and Bricklink, if you currently see them at a retail store they are most likely the re-released glued version. Pay special attention to the information on the back of the packaging!

➡ NON-GLUED MINIFIGURE MAGNET SETS (2010 releases):
These minifigures are perfectly normal in every way. They are removable from the magnetized base, and the minifigure parts are not glued to each other. These sets are currently available at LEGO stores, LEGO’s online shop, and many retail outlets. There is no current evidence of these sets having a glued version, but always check the packaging!

➡ GLUED MINIFIGURE MAGNET SETS (2010 re-releases):
These magnets sets have both glued and non-glued versions as they have been re-released in 2011. You may find either or both versions at retail stores. Pay special attention to the information on the back of the packaging!

➡ GLUED MINIFIGURE MAGNET SETS (2011 releases):
These minifigures are always glued to their magnet base. In addition their torsos and legs are glued together. Heads, headgear and accessories are removable. These sets have no non-glued versions. See Glued Magnet Minifig Removal for solution.

❗ FYI: As far as I know this list is up-to-date and correct. There is risk however that LEGO will re-release more of the earlier magnet sets. In this case the newly released sets will be glued. Use the above list as a guide and TO BE SURE ALWAYS CHECK THE BACK OF THE PACKAGING!

And if you find that a magnet set I have listed in the non-glued section comes in a glued variety please let me know as soon as possible so I can warn other shoppers as well. I need you guys to help me keep this list updated. Thanks! To minifig freedom! 😉