Official LEGO stores have this awesome feature called the Pick-A-Brick Wall, also referred to as PAB-Wall. It is a section of the LEGO store where you can buy loose LEGO elements by the cup from clear plastic bins arranged on an entire wall of the store – a LEGO fan’s dream!

One challenge is knowing what LEGO elements are available at the Pick-A-Brick Wall. If you live close to a LEGO store you have the privilege of checking the PAB-Wall regularly to see what’s there. However, if you have to travel several hours just to get to the closest LEGO store you might want to plan ahead and make a shopping list.

You may be working on a LEGO project and would really like to know if your closest LEGO store carries the elements you need in quantity. So how would you know that? You could call the store and ask if a specific element is in stock, but if you have a long shopping list this can turn into a tedious conversation with a LEGO store employee.

There is an online inventory of the LEGO Pick-A-Brick-Wall maintained by LEGO fans at the BrickBuildr LEGO community site, you can check it out here: PAB-Wall inventory at BrickBuildr. Unfortunately, the site has a quite cumbersome method of updating (involving downloading and then re-uploading an Excel sheet) therefore many of the store locations have been greatly out of date. 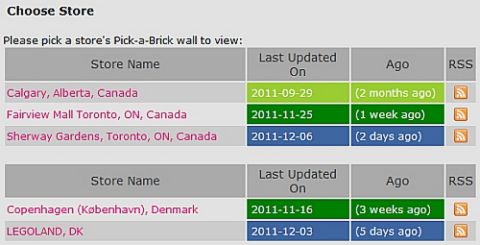 Please note that the site is very new so the Pick-A-Brick Wall inventory of many of the LEGO stores is still empty (last time I checked the Orlando store selection was completed for sure). However the PAB-Wall layout for each store is already set, so if you live near a LEGO store you can help out by filling in the PAB-Wall selection. Even if you can’t do the whole wall at one time, even doing a section would be of great benefit to the LEGO community. Also, the site is not just for the USA. You can add PAB-Wall inventories in Canada, Denmark, France, Germany, and the UK, and you can also request more locations. 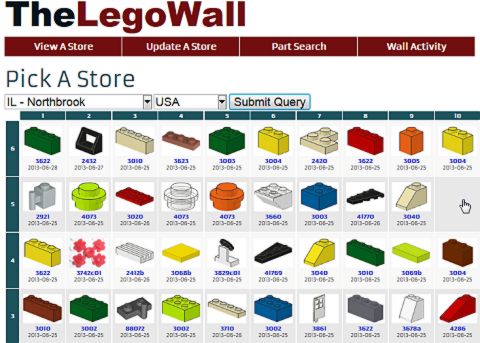 It would also be great if employees at LEGO stores would update the inventory, especially since it is so easy to do. Actually, best would be if LEGO would maintain a website like this themselves, but since they don’t, LEGO fan maintained inventories are the second best option. So go ahead and visit WallOfBricks.com, and if you live near a LEGO store please use the site to help update the inventory. If you run into any issues or have questions you can email: help@wallofbricks.com

Speaking of LEGO Pick-A-Brick-Walls, you may or may not know that buying loose LEGO by the piece is also available at the Online LEGO Shop at the online Pick-A-Brick section. LEGO fans often choose BrickLink to buy specific LEGO pieces, however, I highly recommend you also check the online Pick-A-Brick selection directly from LEGO. They don’t have the vast inventory of every LEGO element ever made like the community of BrickLink sellers do, however, if you are looking for currently produced LEGO elements in quantities the online PAB store could be a great option. I found that they often have better prices on current items than what BrickLink sellers can offer. See here: Shop at the Online LEGO Pick-A-Brick

What do you think? How do you like the new website for LEGO Pick-A-Brick Wall inventories? If you have a chance to try it out next time you go to your local LEGO store I would love to hear how it worked for you. Also, Daniel, the creator of the site, appreciates your comments, questions, feedback and suggestions.