by Thita (admin) on September 19, 2019
in Building Techniques

I recently came across the YouTube channel of LEGOParadise, run by a LEGO fan from the UK named Liam. He has been building some excellent minifig-scale working LEGO vending machines, arcade games, and other interactive machines. Not only that, but he also shares instructions for most of his projects, so you can follow along and build them on your own. 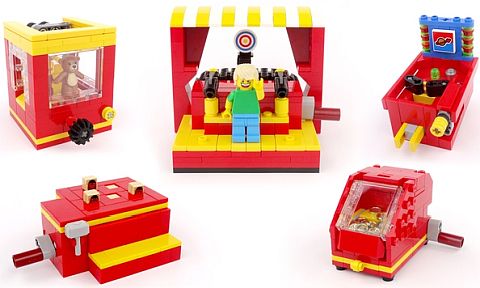 ➡ WORKING LEGO DRINK DISPENSER: In the following video, Liam shows you how to build a simple cafe-style drinks dispenser where you can choose a flavor and press down on the handle to dispense the drink into a LEGO cup. The drink dispenser takes advantage of the modified 1×2 plate with stud-shooter that has been used as a working mini blaster in many recent sets. The piece is currently available in four colors; white, light-gray, black, and dark-red. You can find it on BrickLink here. All the other pieces used for the build are common, and you probably have them in your collection already. As you can see in the video, you can “insert a drink” into the stud-shooter, and then dispense it to a cup by activating the trigger.

➡ WORKING LEGO ATM MACHINE: In the second video, Liam shows you how to build a working minifig-scale ATM machine that allows your minifig to withdraw money when they insert their debit card. Most of the pieces in this project are common or could be substituted if you don’t have the exact piece/color. The only exception might be the lettered tiles, but those are decorative and not essential to the build. The LEGO rubber band is available in many sets, find it on BrickLink here, or you could just use a standard small rubber band.

➡ WORKING LEGO ARCADE GAMES: The next videos showcase Liam’s most popular fully functional classic arcade and fairground games. This first video is a summary of the five games; Pinball Machine, Claw Grabber Machine, Whack-A-Mole Game, Coin Pusher Machine, and Shooting Gallery Game. The projects are posted together as a collection on LEGO Ideas, so if you would like to see them become an official LEGO set, you can vote for them here: VOTE FOR WORKING ARCADE MACHINES ON LEGO IDEAS. And, if you would like to build them now, Liam also shares building tutorials for each of them, which I have also included in the player below.

While vending machines, arcade games, ATMs, etc. appear in official LEGO sets fairly regularly, they usually don’t work and interact as the real machines would. So, seeing and being able to build such creations is a real pleasure. However, there is one official vending machine that I really like and wrote about previously; the working soda machine in the #41099 LEGO Friends Heartlake Skate Park that was released a few years ago (see: Small LEGO Friends Sets with Big Surprises). If you would like to see more of Liam’s creations, visit his YouTube channel; LEGOParadise.

What do you think? How do you like the working LEGO vending machines and arcade games? Are you planning to build any of them? What other minifig-scale working LEGO machines have you built or come across? Feel free to share and discuss in the comment section below!