Before, we begin, I thought to mention that overall I feel that the 2020 LEGO Friends sets have a much nicer color-scheme than the early 2019 sets. Designers abandoned some of the more garish color combinations that were prominent in the 2019 sets for more pleasing combos. In addition, the mini-doll designs continue to impress with really nice clothing styles, prints, and colors. I know many adult LEGO fans stay away from mini-dolls, but personally, I adore them and find them super cute. 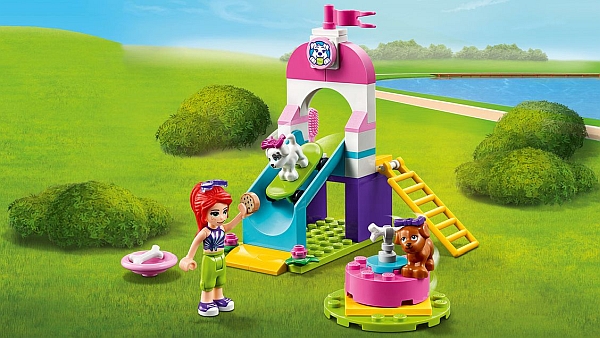 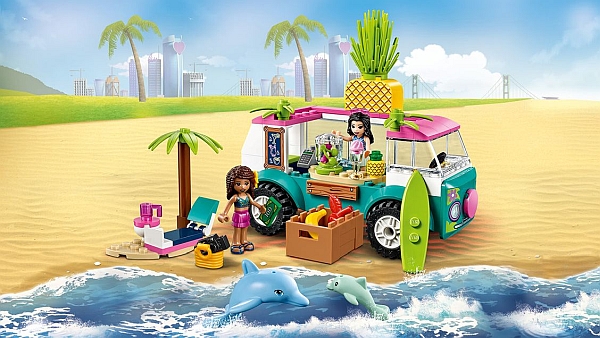 The last two sets – the #41396 LEGO Friends Puppy Playground, and the #41397 LEGO Friends Juice Truck – are meant for the youngest builders (4+), who are just transitioning from DUPLO to regular LEGO, and include very simple building instructions, some large pieces that are easy to work with, and few building steps. Even though it’s for younger kids, the juice truck is actually a really nice set even for older builders and collectors. The colorful truck wouldn’t look out of place at a LEGO City beachfront. The dolphin and baby dolphin are highly desirable collectibles, so are all the printed elements (all decorations in LEGO Juniors sets are printed). The two mini-dolls also look very sweet with nicely detailed tops. It’s worth checking it out. Both sets are available at the LEGO Friends section of the Online LEGO Shop. 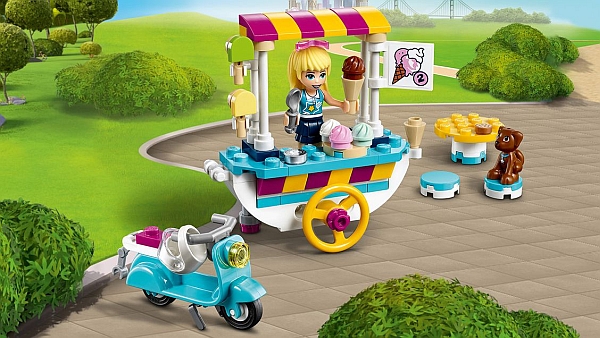 The #41389 LEGO Friends Ice Cream Cart is another very useful little set that would look great both in Heartlake City or a standard LEGO City setting. The medium-azure scooter only appears in two other, more expensive sets, and it’s always nice to get more puppies and ice cream pieces! Yum! 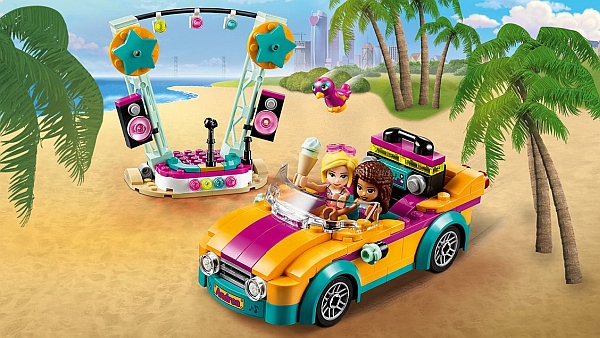 The #41390 LEGO Friends Andrea’s Car & Stage continues to explore Andrea’s love of music and performance, and includes some unique pieces. Take a look at those large stars, the fairly rare saxophone, and another color variation of the LEGO Friends bird. Both girls have lovely outfits, including Andrea’s removable new skirt piece, and Roxy’s silver shoes. But the main attraction here is Andrea’s roofless roadster (as the set description calls it), which is designed to fit both girls, the boom box, and even the speakers. Rock on, girls! 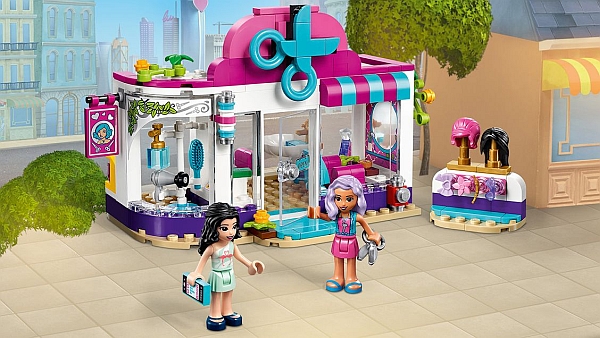 The #41391 LEGO Friends Heartlake City Hair Salon, is a remake of the #41093 LEGO Friends Heartlake Hair Salon from 2015. Both are nice sets with similar color combinations, and it’s interesting to see how the scissors are built differently on the two models. Just like in almost all LEGO Friends sets, there are tons of little accessories here, and some really nice furniture designs. I especially like the shell-shaped sink. For only $19.99, this is definitely a lovely set! 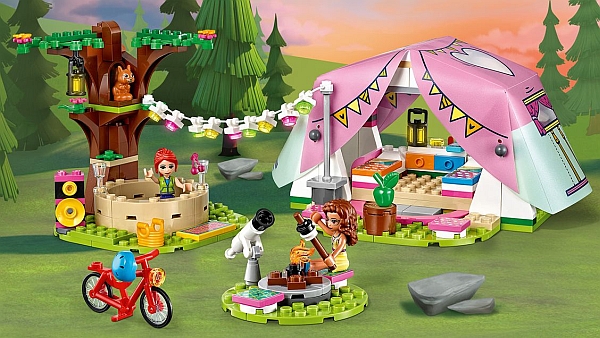 The #41392 LEGO Friends Nature Glamping got me confused a bit, as I have never heard the word “glamping” before. According to Wikipedia, glamping is a portmanteau of “glamorous” and “camping”, and describes a style of camping with amenities and, in some cases, resort-style services not usually associated with “traditional” camping. Glamping has become particularly popular with 21st-century tourists seeking the luxuries of hotel accommodation alongside the escapism and adventure recreation of camping. I never thought of mixing nature camping with hot tubs, but there you have it; glamping. 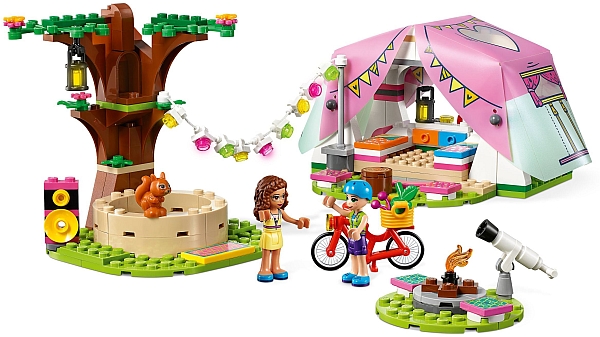 So, with that understanding, now we know what’s going on in this LEGO Friends set; Olivia and Mia are glamping in the woods! The set includes a small brick-built tree, with a hot tub in its shade; flanked by a loud speaker, some snacks, and glasses with cherry on top (they totally don’t include alcoholic beverages). On a separate little base, there is a campfire for roasting marshmallows and a brick-built telescope. The largest part of the set is the tent itself with two beds, a small nightstand, and a few accessories. The tend is made of the same flexible, thin, but still sturdy plastic as sails and comes with holes as attachment points. I’m not a big fan of these pieces, but it’s really the best available option for building tents. I still feel that from the six sets we discussed today, this is the weakest. It doesn’t have as many interesting accessories and useful pieces as the other sets.

As I mentioned above, we will discuss the larger sets another day, but so far I would say that amongst the smaller LEGO Friends sets the LEGO Friends Play Cubes are clear winners, along with the #41397 LEGO Friends Juice Truck. The other smaller sets are attractive too, and it just depends which one fits the best your layout and building style. You can check them out all the LEGO Friends section of the Online LEGO Shop.

What do you think? How do you like the 2020 LEGO Friends sets? Do you have any of them already? Feel free to share your thoughts and own reviews in the comment section below!