When we discussed the tiny size of the new LEGO Disney micro mini-dolls, I shared some comparison pictures with other small dolls of similar size by Mega Construx and Playmobil. (See: How Small are the LEGO Disney Micro Mini-Dolls?) One of the pictures included a small Mega Construx bike that was designed for their own micro mini-dolls, and I was asked to provide some comparison pictures with LEGO bikes. 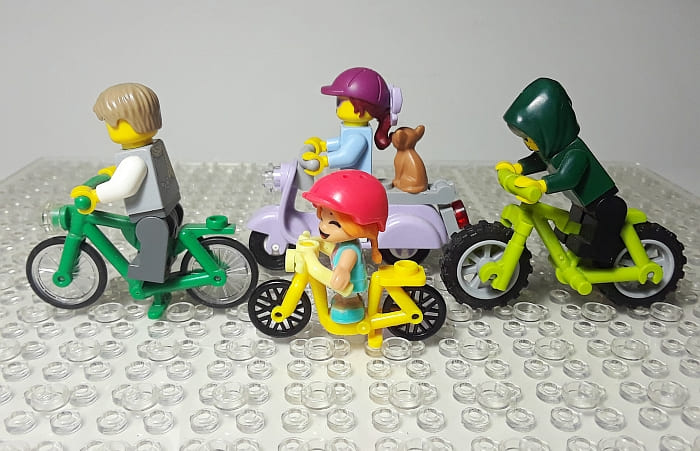 LEGO has been producing their own bike since 1985, and the LEGO bike has appeared in 75 sets to date in eight different colors: white, yellow, bright-light-orange, red, dark-pink, medium-azure, green, and black. The most common color is red, followed by medium-azure. The rarest color is yellow, as it only appeared in a single set in 1998 (#6420 LEGO Town Mai Carrier). Collecting the different colored bikes is a fun pastime many LEGO fans enjoy.

The standard LEGO bike works perfectly for normal LEGO minifigures. The gap between their legs fits right over the frame, and their hands can hold onto the handlebar. Short-legged child minifigs can also use the bike, although their feet won’t reach far enough to the pedals. But their hands can still hold onto the handlebar, and thus can sit on the bike quite securely. The standard LEGO bike is also used in LEGO Friends sets with mini-dolls. Mini-dolls can sit on the bike due to the gap between their legs, but they can’t hold onto the handlebars as their hands don’t rotate. My guess is that at some point LEGO will release a mini-doll specific bike. In the meantime, the standard bike works fairly reasonably. 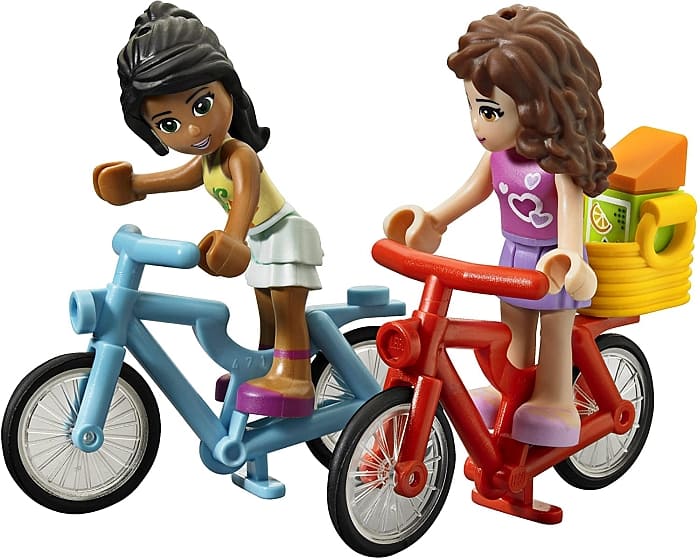 The standard LEGO bike has some nice features worth mentioning. It has two attachment points, so a bike-light and cargo can be attached. And the stand at the bottom makes the bike balance well on stud-less surfaces or fit securely between studs. It’s also worth noting that the bike wheels have two versions. The older wheels produced before 2016 have separate tires, while on the newer bikes, the wheel and tire are one piece. Overall the standard LEGO bike is a very nice design that stood the test of time. 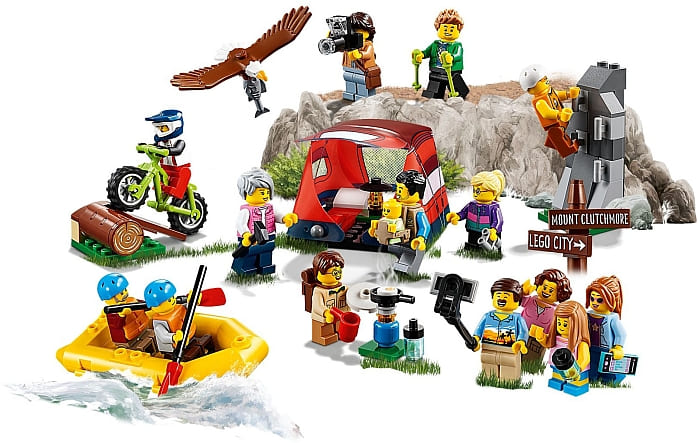 A couple of years ago, LEGO added a new mountain bike frame. The new bike only appeared in three sets so far; in lime-green with light-gray wheels in the #60202 LEGO City People Pack, in blue with yellow wheels in the LEGO Collectible Minifigs Series 19 Mountain Biker pack, and in dark-azure with red wheels in the LEGO Hidden Side Newbury Subway. The mountain bike works really well for both standard minifigs and child minifigs (the frame is smaller, so child minifigs can reach the pedals), but it’s too small for LEGO mini-dolls. 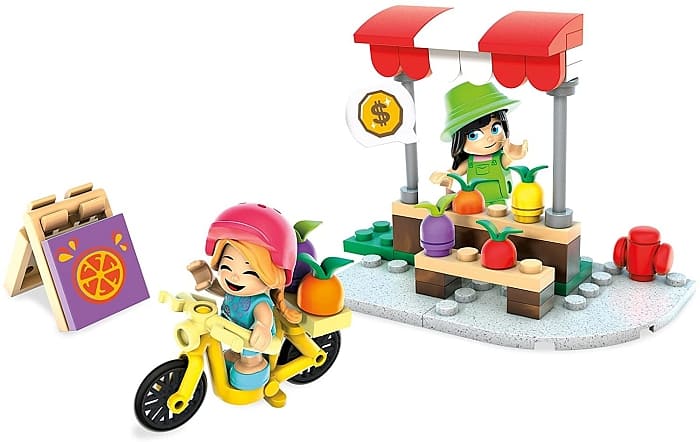 The second set is the Mega Construx Roadster Building Set with the same bike in three more colors; lime-green, dark-pink, and dark-azure. I would love to get this set, and I have heard rumors that it might be available in Mexico, but I haven’t been able to locate one. 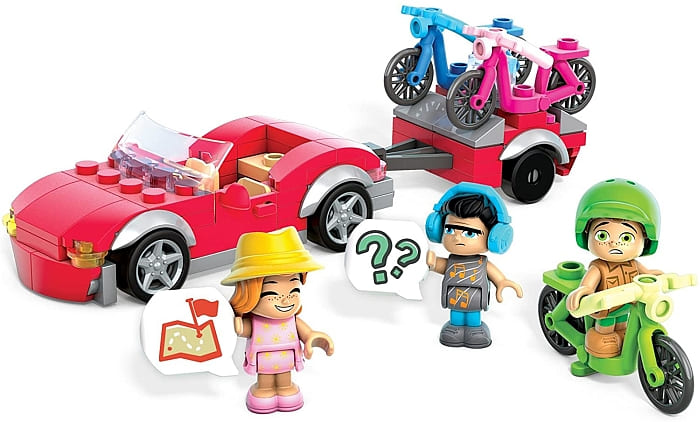 The design of the Mega Construx bike matches well with LEGO’s aesthetics and the stud size is the same, so the question naturally arises if the bike could be used as a child’s bike with LEGO. The answer is yes and no. Although the Mega bike looks similar to the LEGO bike, it has some major design differences. 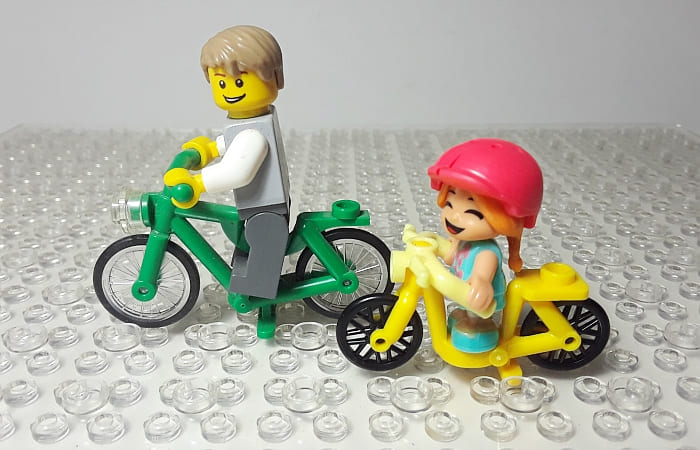 The Mega bike was specifically designed for micro mini-dolls with fused legs. So, instead of the bike frame fitting between the legs of a minifig/mini-doll, the frame is more like a scooter, with the micro mini-doll standing on a single stud. While a child minifig can sort of squeeze in the gap, it can’t be pushed down far enough to attach to the stud. But it can still hold on to at least one handle bar. It looks like a big kid awkwardly trying to ride a toddler’s bike. 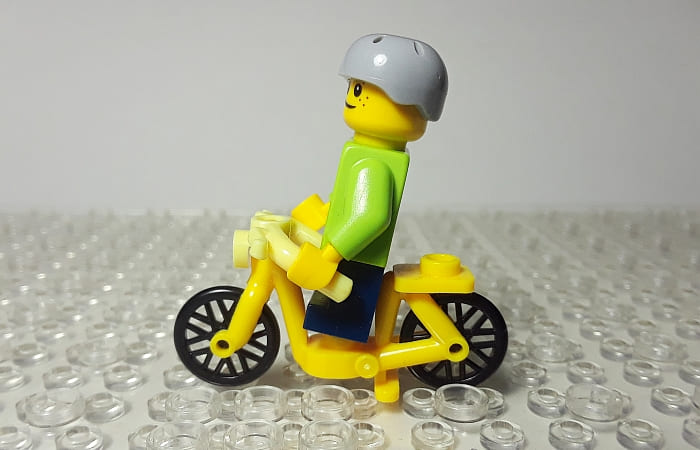 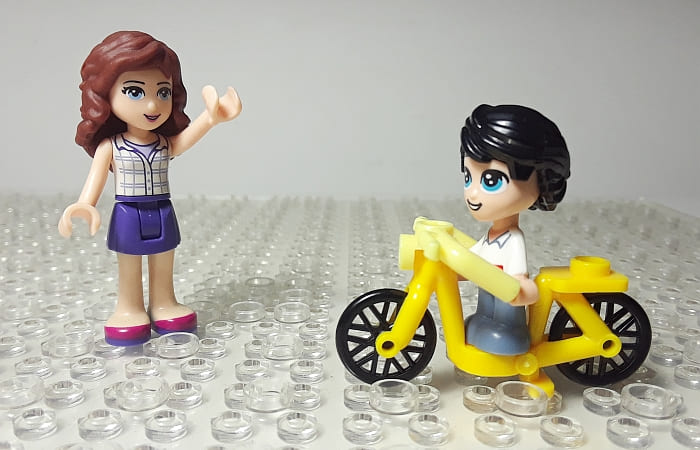 So, to summarize, the Mega Construx World of Yootz bike matches LEGO’s bike in design and could look good at a LEGO playground or backyard. However, only LEGO micro mini-dolls can actually ride it. Nice little bike though, and I hope that some day I can get the other colors that are supposedly available somewhere. If you’re interested in getting the yellow bike, it’s available on Amazon: Mega Construx Fruit Stand Building Set

What do you think? Do you collect LEGO bikes? Do you have all the available colors? And how do you like the Mega Construx mini-bike? Would you consider using it in your LEGO city? Feel free to share your thoughts and discuss in the comment section below!