At the beginning of the year, we were slammed with all sorts of rumors of what would be releasing later in 2021. That info dump was exciting, but then I completely forgot half the things mentioned. So, when LEGO offered a couple of new LEGO BrickHeadz sets to review without much detail, I was at a complete loss as to what they could be. 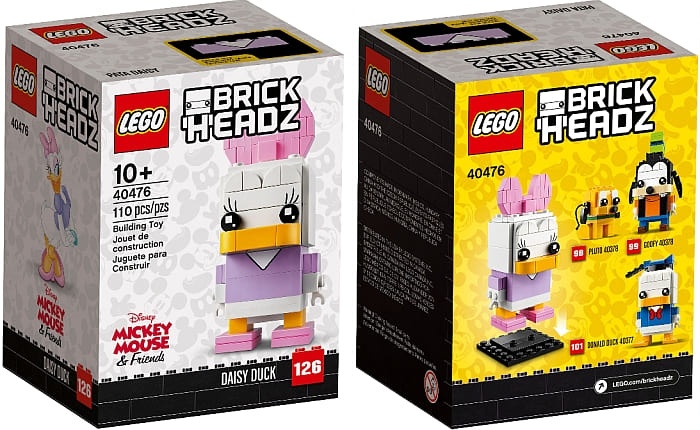 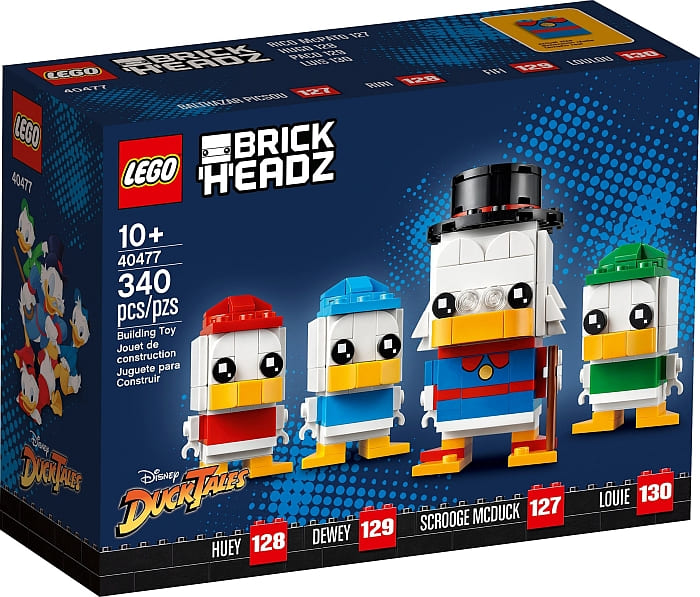 I personally love LEGO BrickHeadz. It’s an art form translating popular characters into the blocky style that is BrickHeadz. There are, of course, some LEGO BrickHeadz I don’t have, like all of the early San Diego Comic-Con sets, but I have picked up all the commercially available sets in the series. So, I was excited to have the chance to review the #40476 LEGO BrickHeadz Daisy Duck and the #40477 LEGO BrickHeadz Scrooge McDuck, Huey, Dewey, and Louie.

Opening up the boxes, I was greeted by some old familiar faces. The ducks of Disney invaded my building table in a big way. Daisy Duck makes an appearance, further swelling the ranks of Mickey’s classic friends. And a blast from the past of my own childhood came in the form of the Duck Tales crew! Scrooge and the boys are ready for some off-the-wall adventures. The extended Duck family got seriously bigger with these two sets. So, let’s take a closer look at all of them and help you decide if they are going to be heading to your collection!

With LEGO BrickHeadz like Mickey and Friends, there are a number of characters people want to have to make the collection complete. We’ve already seen some of the most popular characters including Goofy, Mickey Mouse, and Donald Duck, so now we’re moving into some less featured Disney friends. Case in point, Donald Duck’s love interest, Daisy Duck. 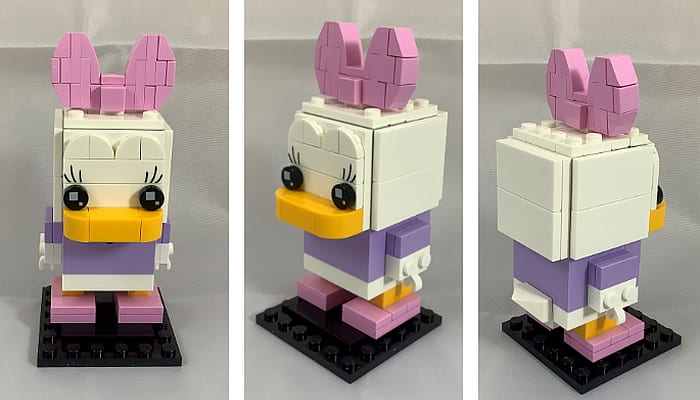 Whenever she’s made an appearance, she’s often the voice of reason and tends to be the one to calm Donald down. This is why she tends to appear at the beginning or end of cartoon shorts to give some normalcy to the show. Unfortunately, this does mean she gets less screen time compared to Donald.

This calming presence translates into how she looks. The lavender top with big friendly bow on top of her head is surprisingly soothing to the eyes. I was a little sad they didn’t go with the dress I’m more familiar seeing her in. That would have made the building experience a tad more exciting. 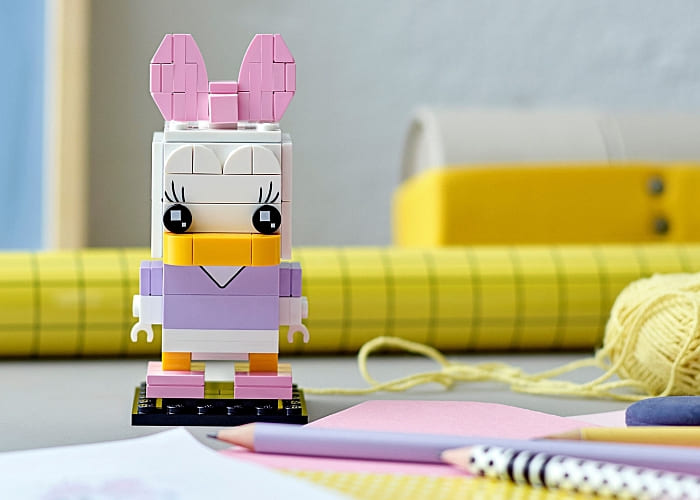 Overall, she’s a simpler model when it comes to LEGO BrickHeadz. The only building points of interest are the large bow on her head and her larger than average shoes. After all, she does have wide webbed feet to put into her pink shoes.

As for special prints, we do have a couple of printed pieces to enjoy. The front of Daisy’s shirt on a 1×4 brick features some shirt printing. Another print that I really liked is found over her eyes; a 1×4 tile with eyelashes printed on them. It was always surprising to me how Disney used eyelashes on their classic female characters to help differentiate them from their male counterparts, but it works. 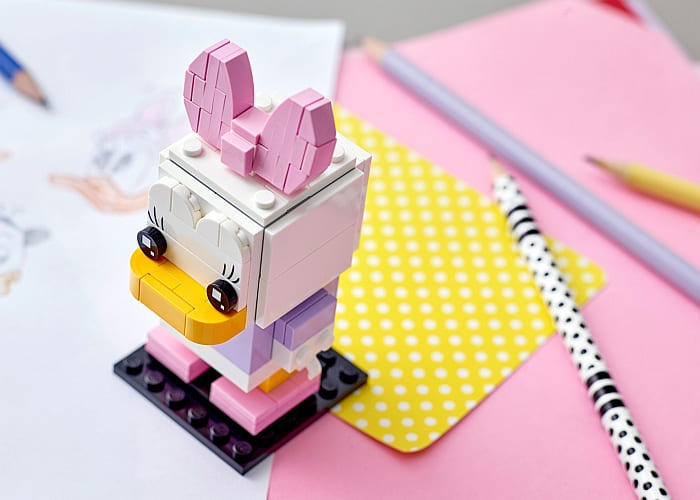 As with other LEGO BrickHeadz ducks, Daisy does have tail feathers. Additionally, the sides and back of her head are rather plain. And her beak is the standard rounded piece we’ve seen with Donald in the past. Ideally, you won’t be picking up Daisy for an incredible building experience, but rather to fill out your classic Disney characters.

Right off the bat, there are two things interesting about this set. First, the packaging is not Mickey and Friends. Rather we are treated to Duck Tales! Second, this is the first LEGO BrickHeadz set I can recall that offers four figures in a single pack.

First, you are instructed to build Scrooge McDuck, the world’s most wealthy duck. With his iconic top hat, spectacles, cane, and colorful coat, he’s one duck that features a lot more personality than other Disney ducks. He even features a printed brick in front to get his waistcoat and lapels just right. I also really enjoyed the fact that LEGO designers used different wedge plates on his feet to recreate spats over the webbed feet. I can’t say it’s a difficult build, but with enough unique shaping it’s quite enjoyable. 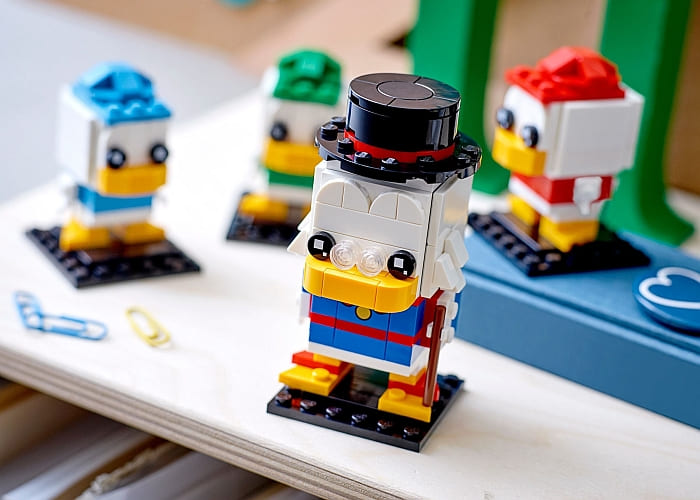 Then there are the boys. They are built as smaller characters so you can’t fit in a lot of details. And because they are triplets, you’re building the same character three times just with a different color hat and shirt. I hoped that LEGO designers would give each boy an accessory to at least give them something unique (like in the LEGO Disney Collectible Minifigure Series 2). Sadly, that’s not the case. To be fair, if you watched the original 90’s version of Duck Tales, there was very little to distinguish each boy from one another other than the color of their clothes. So, it’s safe to say, this set is probably based on the earliest version of Duck Tales. 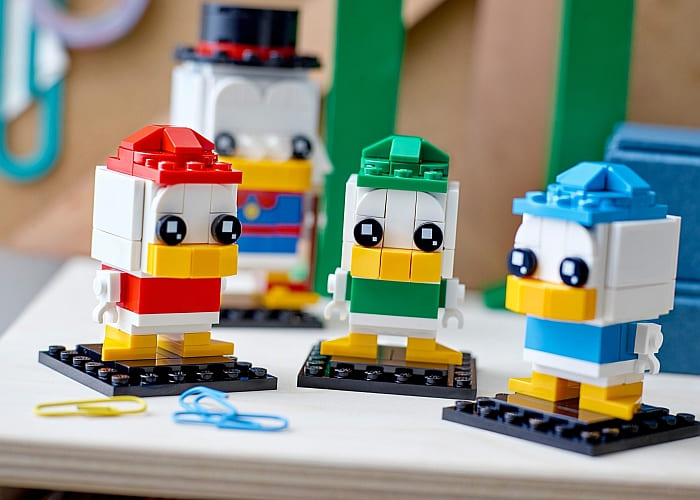 As for the models themselves, there are some curved tiles to round out sections like the tops of the hats and the top section of the faces. But just like with the other ducks, the heads are fairly plain to look at. I’m also not sure how I feel about the feet. Small wedges were used to make the duck feet, but they just stick off to the sides and not forward like the adult ducks. But the thing is, I can’t really imagine how else it could have been done and still be stable. 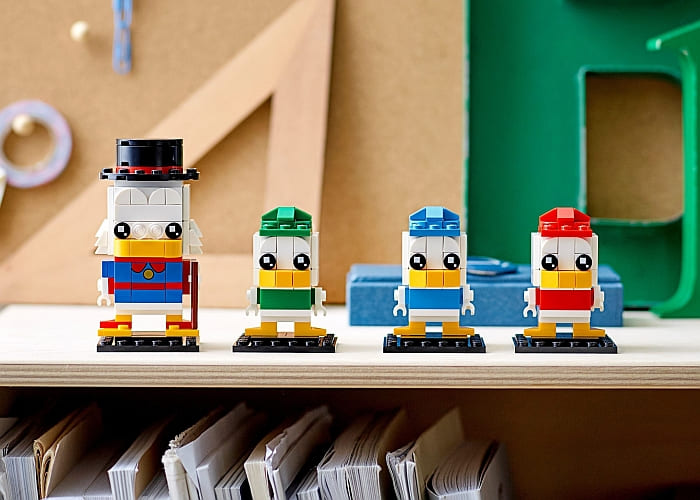 I think what you end up with is a set that has more characters than usual, but the boys might have been not well received if they were sold on their own. So, it’s smart to package them with Scrooge. For a slightly better building experience, you can perhaps build the boys first and then build Scrooge to end on a strong note. Or you can build all three boys at once at the same time to slightly increase the building challenge.

These LEGO BrickHeadz sets are all about nostalgia. They are perfect for the Disney fan who is okay with the blocky look. If you’re a LEGO BrickHeadz fan first, I can see these being lower on your priority list since there’s nothing too remarkable about the builds, save for the few printed elements. In the video below, I share some additional thoughts about the sets.

As I personally am a LEGO BrickHeadz and Disney fan, these sets give me hope that we may get more Disney characters in the future. I’d like Chip and Dale as well as other Duck Tales characters like Gismo Duck and Launchpad.

It’s also nice to see LEGO BrickHeadz sets being released at a much slower pace. The first year or two was a non-stop deluge of sets. By having them release slower, it makes it feel a bit more special to get them, as each of them can stand out and not be just one more in a sea of cube shaped faces. Plus, LEGO can try different ways to package the sets, like with Duck Tales having four characters. It’s an interesting way to freshen up the experience. You could say, LEGO is finally getting all their ducks in a row! If you want to check out the sets, they are listed at the LEGO BrickHeadz section of the Online LEGO Shop.

What do you think? How do you like these new LEGO BrickHeadz sets? Are you interested to add them to your collection? Feel free to share your thoughts and discuss in the comment section below!