The latest Disney animation, Raya and the Last Dragon, was released in March, both in theaters and on Disney+. The story plays out in the fantasy world of Kumandra, where long ago, humans and dragons lived together in harmony. However, when sinister monsters known as the Druun threatens the land, the dragons sacrifice themselves to save humanity. At the end of the battle, Sisu, the last dragon, concentrates her magic into an orb-shaped gem and banishes the Druun, reviving Kumandra’s people but not the dragons. 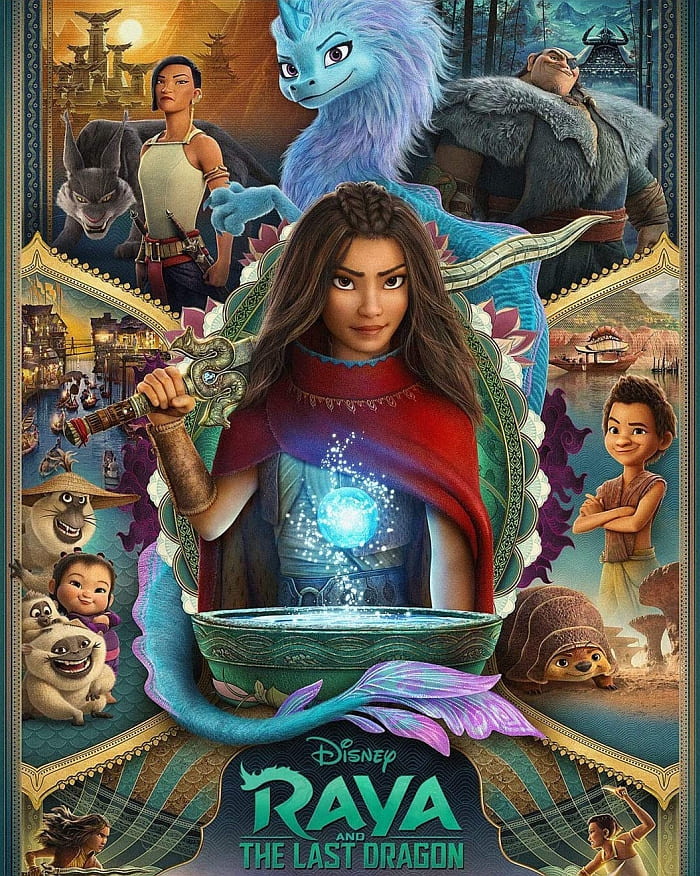 The gem remains in the care of the Heart tribe, one of the five tribes of Kumandra. Chief Benja trains his daughter, Raya, to become the next guardian of the gem. Unfortunately, a power struggle for the gem amongst the five tribes eventually leads to the gem getting stolen, broken up, and divided, which then also reawakens the Druun. After a long search for Sisu, Raya is finally able to team up with the last dragon, and they go on a mission to find the pieces of the gem, unify the tribes, and banish the Druun once and for all.

During their adventures, Raya and Sisu make new friends like Boun who owns a boat that turns out to be very useful, “con baby” Noi and her trio of monkey-like companions, and Tong, a fearsome warrior. They are able to reclaim pieces of the gem, with only one more piece remaining. As the group gets closer to the place of the Fang tribe to get the last piece, Sisu suggests allying with Namaari, daughter of Chief Virana. This idea doesn’t sit well with Raya, who is struggling to trust others. The story gets pretty intense from here and centers around Raya learning to trust her friends, and even enemies in the middle of desperation and chaos.

The reason I’m telling this story is to emphasize how important the characters are. It’s not just about a single heroine overcoming obstacles and performing great feats. It’s about friendship, it’s about trust, it’s about ordinary people making a difference by uniting together, and it’s about forgiving our own mistakes as well as the mistakes of others. Another unique feature of the film is the East Asian mixed with fantasy setting with beautiful landscapes, towns, and palaces. And both the characters and the setting provide a great setup not just for a great film, but also great LEGO sets. 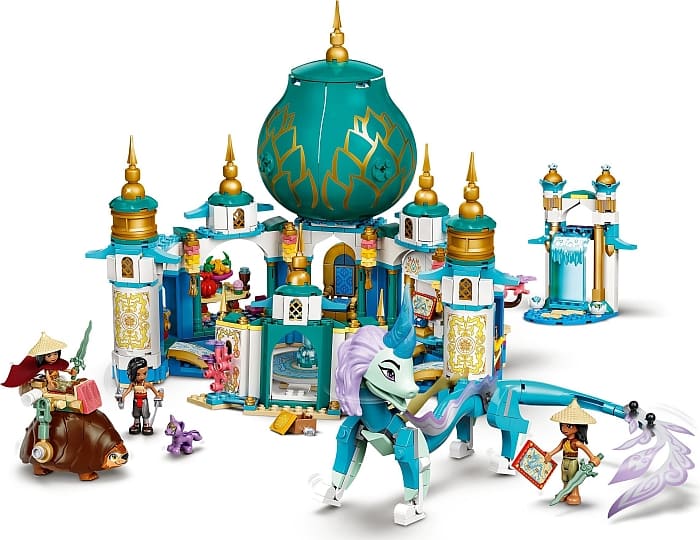 There is a lot to like about these sets. The color-scheme mixing several shades of blue and teal with white and gold is particularly pleasing. Most of the decorations you find in the sets are stickers, but there are also some really nice printed pieces, like the 2×3 tile with map and the large onion-style dome.

I also really like the characters. The mini-dolls of Raya, Namaari, Boun, and the human form of Sisu are all nicely detailed and true to the movie. Although I believe that holographic hair would have been more appropriate for Sisu, instead of just plain lavender (like Sweet Mayhem’s hair from The LEGO Movie 2). However, I’m disappointed that they are the only characters included in the set. The movie is all about making friendships and working together with others. Thus, it feels strange that the sets feature so few characters. The three monkeys are included, but not Noi, their leader. And I would have really liked to see Raya’s dad, Namaari’s mom, Tong, and some warriors and villagers. (I had the same disappointment with the LEGO Disney Moana sets as well. That movie was also about friendship and working together, and the sets only include two characters from the entire film. It’s just sad.) 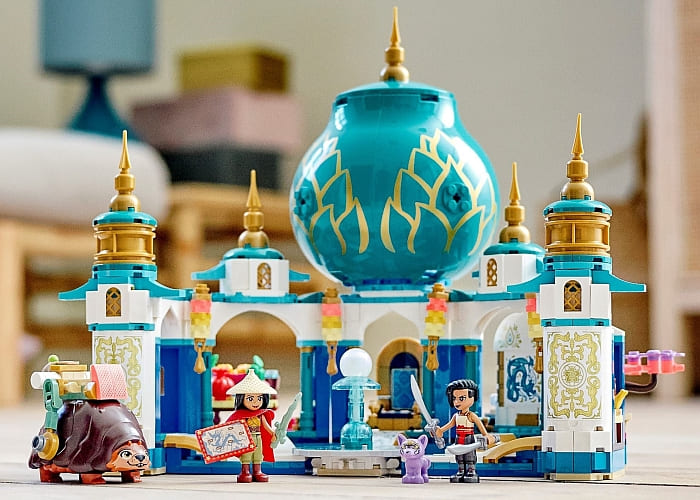 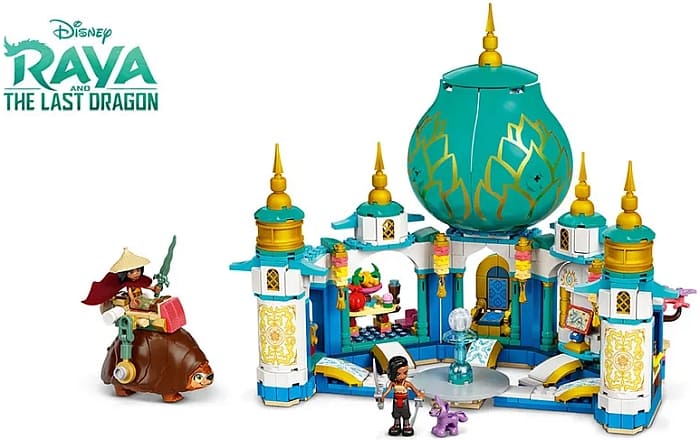 The #43181 LEGO Disney Raya and the Heart Palace is the largest amongst the three sets, with 610 pieces for the price of $79.99. LEGO Disney sets are meant for children ages 7+, but I think adults would also appreciate the nice parts-selection and amazing colors here. This set could be easily expanded for building a larger fantasy palace. The printed domes are particularly beautiful. The printed map is another nice piece, and I really like Raya’s sand-green sword. The set also features Tuk Tuk, Raya’s pet that’s a hybrid of a pill bug, an armadillo, and a puppy, and functions as a high-speed off-road vehicle. It’s just a dual-moulded large piece with no articulation. It’s an enjoyable set to build, and again the colors and parts-selection is pretty great for custom projects. 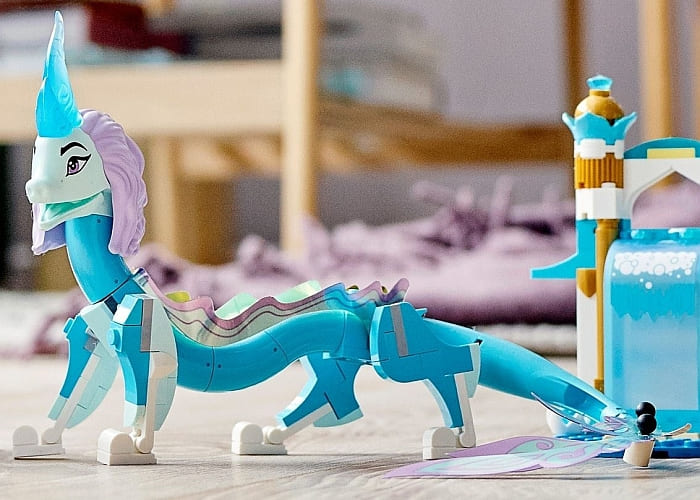 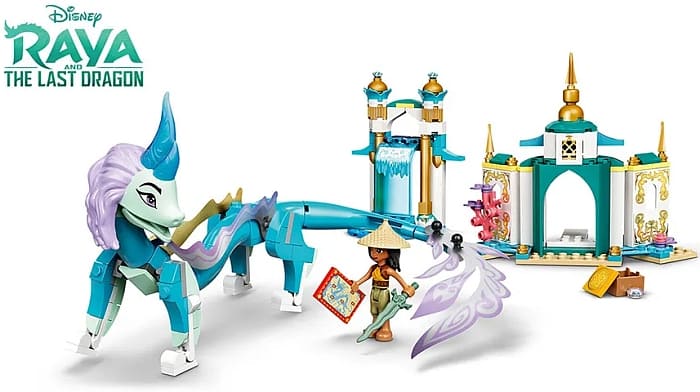 The #43184 LEGO Disney Raya and Sisu Dragon contains two small buildable sections (a waterfall, and small part of the palace), and the main feature is the buildable Sisu dragon. The upper part of the dragon’s head is a single triple-moulded piece, and the lower jaw is a separate piece. Although it’s not clear on the pictures, the horn is actually translucent with beautiful curvy patterns. The wing and tail pieces are made of a silvery foil and also very beautiful. Sisu reminds me of the dragons from the LEGO Elves sets, and if you collect dragons, she would be a lovely addition. Just like with the human characters though, I’m sad that she is the only dragon included. Sisu’s relationship with the other dragons was quite important to the story. This set is really only worth it if you collect dragons. It comes with 216 pieces and the price is $29.99. 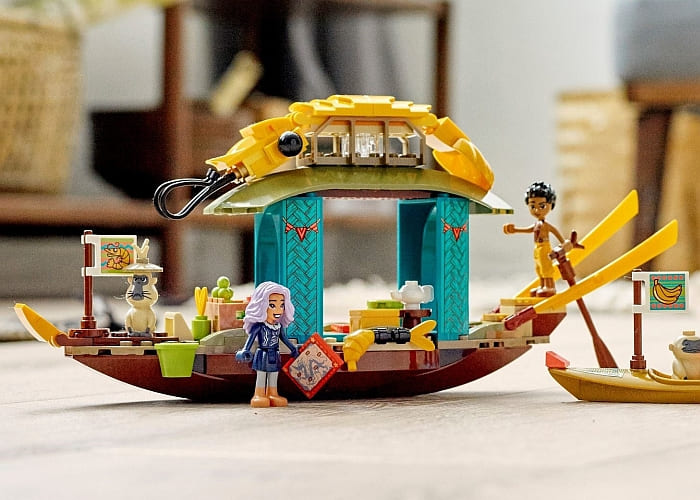 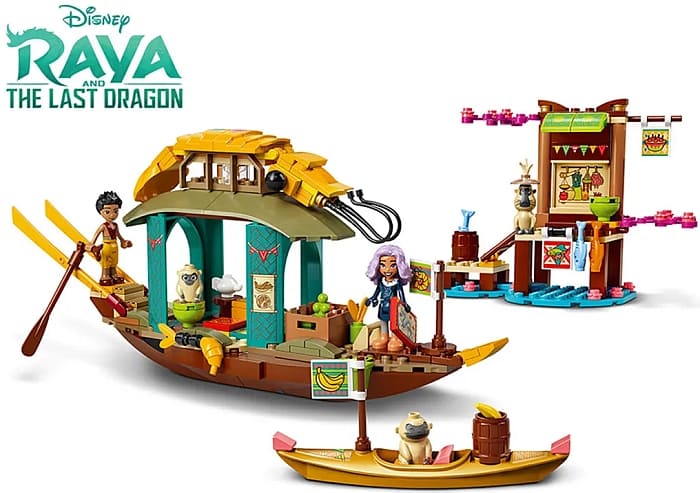 The #43185 LEGO Disney Boun’s Boat features several key characters that are unique to this set; Sisu in human form, Boun, and the three monkeys. As I mentioned above, I would have really liked if Sisu came with holographic hair, as it would have better matched her character from the film. Boun looks okay, and the monkeys are cute, but as I said, their leader, baby Noi, is missing. The boat is nicely done, and a canoe is also included. They could work well with the Ninjago City sets or in other Asian-style layouts. A small part of the marketplace is also included, but if you have seen the film, you know that this should have been a much bigger section with lots of stalls and characters. Overall, this is a decent set if you want to collect the characters from the movie, but not much more. It comes with 247 pieces and the price is $49.99. 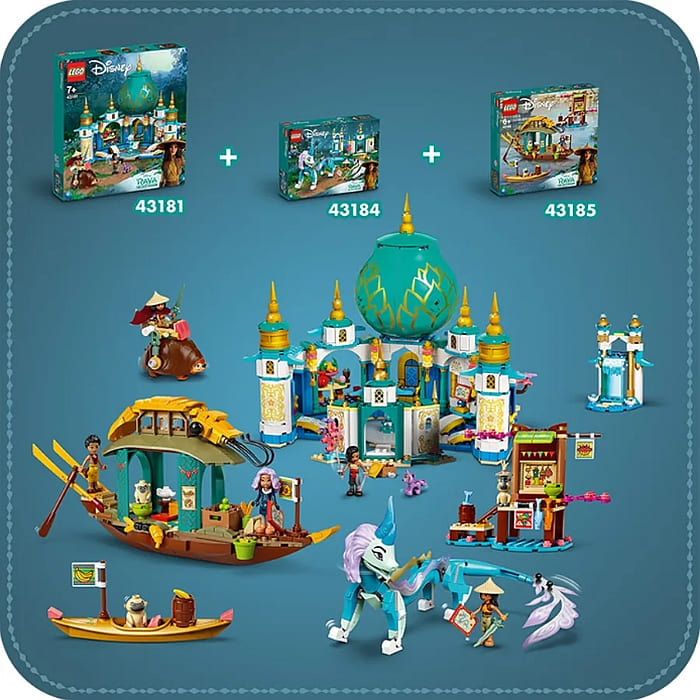 In the video-review below by JBBrickFanatic, you can see all three sets in more detail, including the mini-dolls and play-features.

Overall, the LEGO Disney Raya and the Last Dragon sets look nice, and can offer quite a bit of playtime for younger builders, and lots of interesting parts and colors for adult fans. They just feel a little too empty with so few characters. If you want to check them out, they are available at the LEGO Disney section of the Online LEGO Shop. 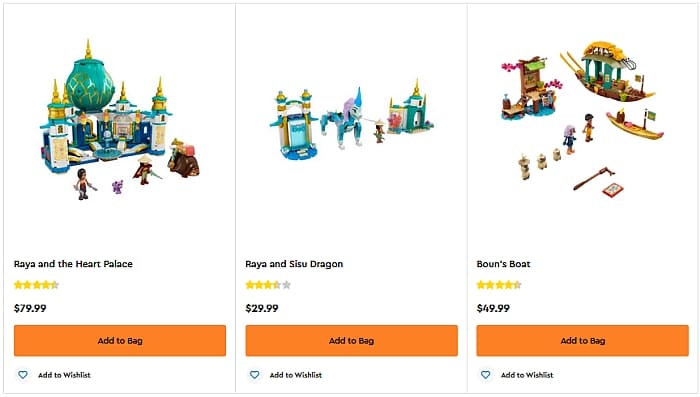 What do you think? How do you like the LEGO Disney Raya and the Last Dragon sets? Did you see the film? Did you like it? Feel free to share your thoughts and discuss in the comment section below!