I hate to say it, but my interest in the LEGO Super Heroes display pieces has been declining. I had a decent time with the #76165 LEGO Marvel Super Heroes Iron Man helmet. At the time, it was the first helmet I had built so the experience was novel. There was nothing too interesting to blow me away, but I felt I had a good time with it. 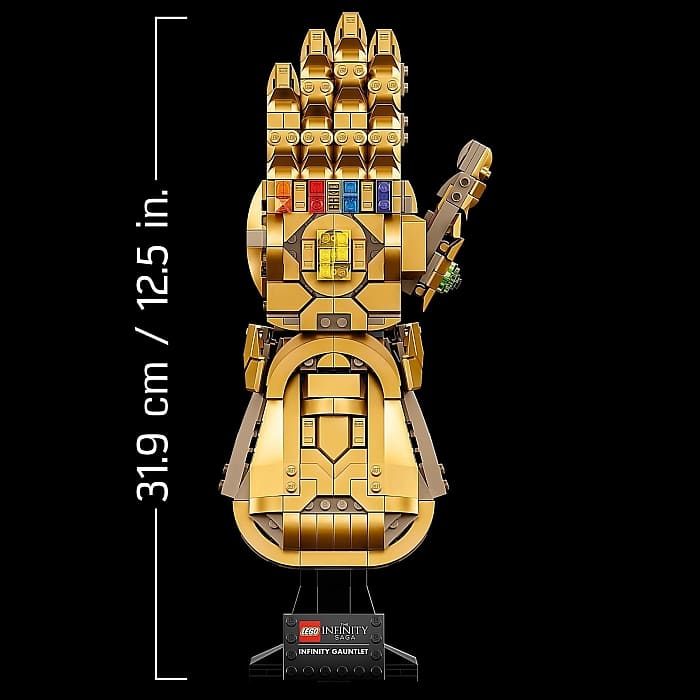 So, I tried my hand at DC and built the #76182 LEGO DC Super Heroes Batman Cowl. That was a mixed bag for me as well. There were parts I really did like, namely the ears and shaping of the nose and eyebrows, but there were parts I had issues with. I did not care for the base stand at all, and the missing mouth section just felt bland, plus it didn’t do much to show off the cowl in the best light. Like I said, the LEGO Super Heroes sculptures were falling a bit flat for me.

So, to mix things up a bit, I decided to check out the #76191 LEGO Marvel Super Heroes Infinity Gauntlet. Sure, it was another sculpture, but at least it wasn’t a head. So perhaps I’d feel different? Well, I think it finally captured what was missing for me. Not only did it have some additional posable options, but the sculpting is also more interesting, as it’s not just a mass like a head. Without a doubt, this turned out to be my favorite LEGO Super Heroes sculpture so far. So, let’s look at some of the features and see why.

Not many LEGO sculpture pieces have the ability to be posed in various ways. Then again, very few such pieces are trying to recreate something that is flexible. This makes the Infinity Gauntlet a rather rare case. Since it is meant to replicate a moving piece of armor/artifact, so it makes sense to include articulation. 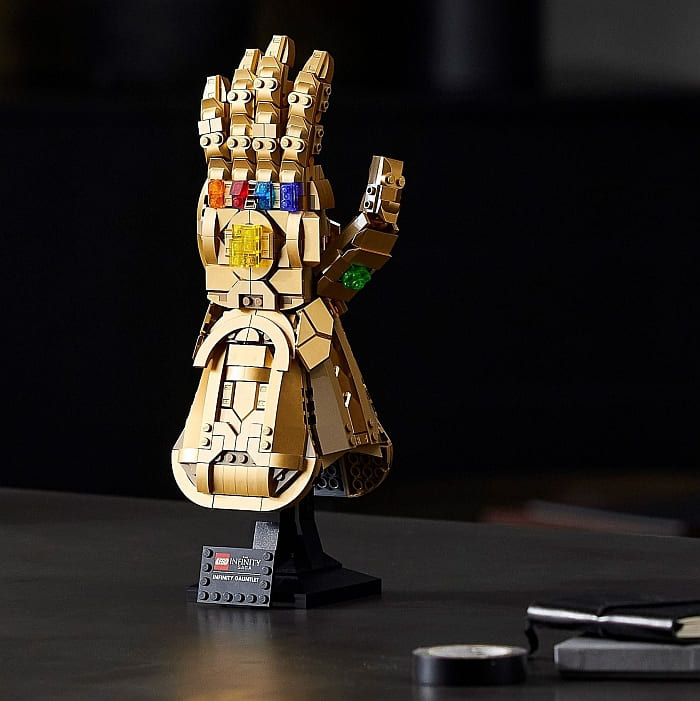 Generally, building something with articulation is not hard. You select a joint, add a hinge, and you’re done, right? Well, technically that is true. However, if your goal is to recreate a true replica of an object, it is actually more important to understand how the articulation is limited.

The gauntlet is made to mimic the movement of a human hand. Putting hinges on all the finger joints is an easy first step. However, LEGO designers were careful to create limits that made the movement realistic. For instance, each knuckle has a flap that rests over the next section on each finger. This flap prevents the finger joints from bending back the other way.

Another small point of articulation is at the base of each finger. Each digit is connected to a rounded plate with bar. The rounded plate portion does allow for some side-to-side movement, as when we splay our fingers wide apart. However, these pieces are hemmed in by the parts around them to limit this ability.

Most of the time, LEGO will simply give the illusion that a joint exists. You get this a lot with fixed knees and elbows on mechs. This is one of the first models that went for as much realism as possible. In fact, the only joint I could tell that was missing was a single knuckle on the pinkie finger. Though it is important to point out, this is a gauntlet and not a hand. So, it is highly possible that gauntlets don’t have full range of articulation in real life either.

Honestly, as cool as the articulation of the fingers are, what impresses me the most is the multi-sided sculpting involved in this model. Each piece is selected not just to add shape and detail to the side it faces, but it also needs to add to other viewing angles as well. 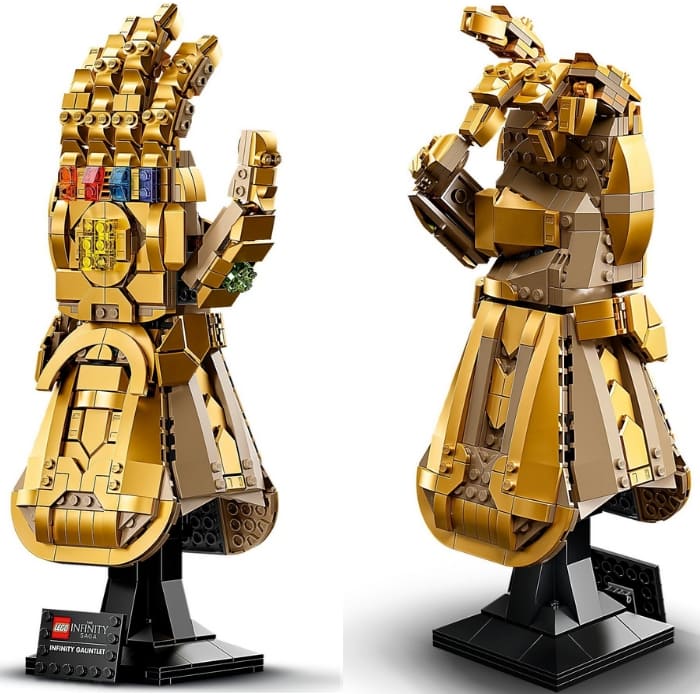 This skill has less to do with building than it does with a person’s spatial reasoning. Being intimately familiar with a given piece so that you know how it looks from every side is the only way to improve at this skill.

In this model, we have a number of elements that showcase this building style, but the side of the hand really caught my attention. This is the part of the hand opposite the thumb. It has a slight bulge yet seamlessly transitions into the other sides of the hand.

While building the model, this section is left bare. Then the instructions guide you through an oddly shaped collection of slopes and plates. When done, you end up with a complex shape that is turned upright and placed into the model. I was marveling at the fact that LEGO designers even shaped the underside of this small bit of construction to act as guides when connecting it into the model. It caught me off guard to see the finished product.

The width, height, and length were incredibly balanced to line up with the rest of the hand. In addition, part of this section filled in the part of the palm as well. And as pretty as all this was, it bugged me. How could I get my own building skills to look that good?

The answer is roofs. Whenever we build a roof on anything we are essentially using the skills required to master multi-sided sculpting. The only difference here is that LEGO designers incorporated sideways building into the mix. So, if you are trying to get better at this, simply turn your model in whichever direction is necessary and tell yourself, build a fancy roof here. That has got to be the easiest way to become comfortable with sculpting at this level.

I am a bigger fan of Super Heroes than I am of Star Wars. So, when I heard there would be sculptures much like the helmet series in Star Wars, I was stoked. Unfortunately, I feel the various models have been mixed as far as how well they look compared to their Star Wars counterparts. 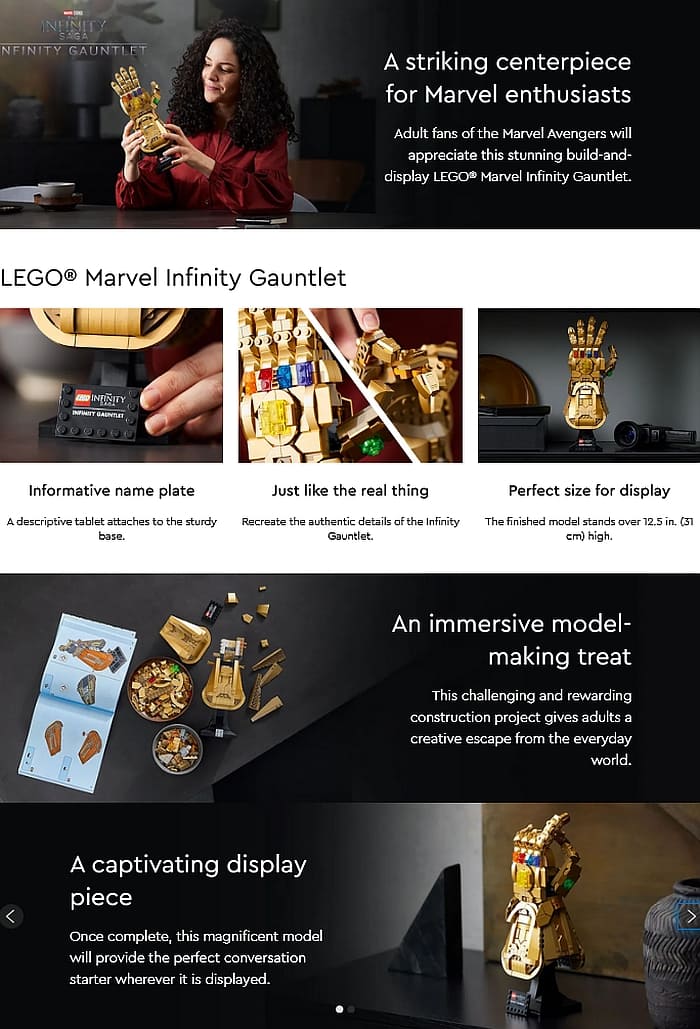 A big reason for this is that the Star Wars helmets are iconic for the characters they represent with their unique styles and shapes. They make great objects that we associate with a broader sense of the intellectual property. Super Heroes, on the other hand, are a bit narrower in their appeal.

Fans will either really like or dislike a character, which means the audience for a given piece is fractionalized. The Infinity Gauntlet is the first sculpture-type piece that moves past this limitation. It is an object of power that so many characters have their focus on. You don’t need to be a fan of Thanos, you just have to be interested in the overarching story the infinity stones played a role in.

Additionally, the model is pretty. Not only does it have a great build, but it comes with a lot of eye-catching shine and sparkle. It’s definitely something I’ll keep together to rule over my superhero universe! In the video below, I will summarize my thoughts on the set, and if you want to take a look, it’s available at the LEGO Marvel Super Heroes section of the Online LEGO Shop.

What do you think? How do you like the Infinity Gauntlet? Do you have it already? Did you notice any interesting building techniques that took you by surprise? Feel free to share and discuss in the comment section below!