by Thita (admin) on February 26, 2022
in Featured LEGO Creations

Do you remember the #21315 LEGO Ideas Pop-Up Book from 2018? The set was shaped like a pop-up book with two interchangeable classic fairy tale scenes; Little Red Riding Hood, and Jack and the Beanstalk. (The set is no longer available from the Online LEGO Shop, but you can still get it on Amazon.) The LEGO pop-up book motivated many LEGO fans to build their own story inserts for the book, and it was also the inspiration behind a series of fun videos that were posted on LEGO’s YouTube channel titled, “Fairy Tales Rebuilt”. 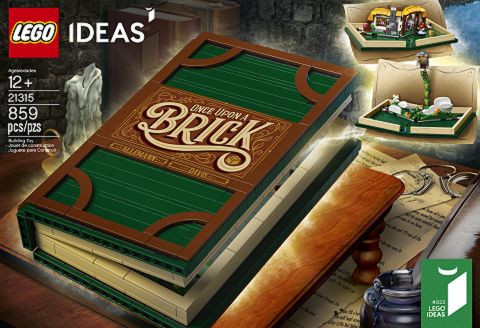 Each of the videos is a reimagined version of classic fairy tales with a light-hearted LEGO twist. While the stories are primarily meant for kids, teen and adult builders can also appreciate the stories and the LEGO-built settings. I also like that each of the stories comes with a recolored version of the original pop-up book set (which was dark green with brown and gold accents). You can watch the videos below.

The first video is the tale of Hansel & Gretel. But why is there a child-eating witch? That’s not fun. So LEGO animators are telling this fairy tale differently, and rebuilt it brick by brick to share what really happened with Hansel & Gretel in an alternate universe.

We all know the tale of Goldilocks and the Three Bears, but does anyone know why she felt she could enter someone else’s house? LEGO animators decided to change a few things to tell the story. And check out that awesome treehouse!

The tale of Little Red Riding Hood is another story that everyone knows, but why is she so easily fooled? LEGO animators rebuilt it to tell it how it should be told. I really like the cute grandma’s house and shed! I think they would make a great LEGO set!

What do you think? Do you have the LEGO Ideas Pop-Up Book set? Did you build your own inserts for it? And how do you like these retold stories? Feel free to share and discuss in the comment section below!