Over the years, I’ve built a few LEGO Architecture sets. As a legally blind person, I’ve always found them interesting in that they allowed me to see what a famous structure actually looks like. I was especially fascinated with the #21042 LEGO Architecture Statue of Liberty monument. There’s something about monuments I like just a little more than the average famous building. So, when LEGO offered the #21058 LEGO Architecture Great Pyramid of Giza for early review, I was eager to dive into it. 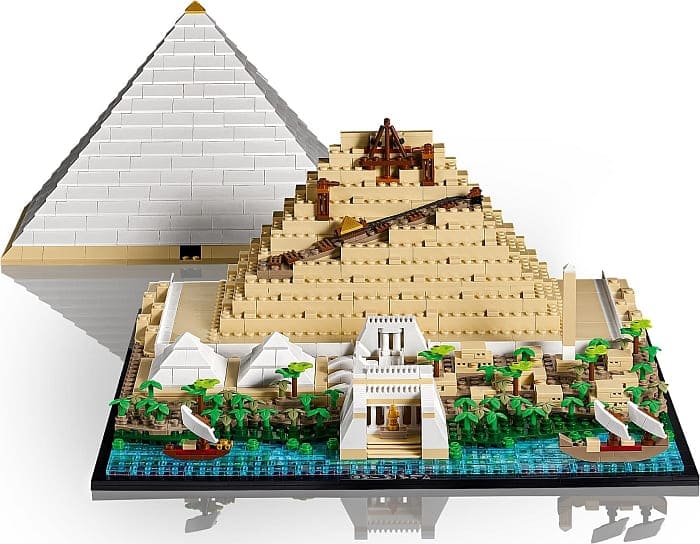 As one of the ancient wonders of the world, the Great Pyramid of Giza is much richer in history, given the fact it’s been around for so long. Many of the other LEGO Architecture sets released are lucky to boast being around for a hundred years or so. But Giza has stood the test of time and counts years in the thousands. This made me wonder, how can this be reflected in a LEGO Architecture set? Or, would LEGO even bother? To my great pleasure, they did do a bit more with this model than others I’ve seen. So, let’s dig in and excavate the treasures of this ancient monument.

The first thing one might notice is that this set only provides half a pyramid. Due to the amount of detail LEGO designers put into the model, this was hard to avoid. However, for those who absolutely need to have a complete pyramid, LEGO did incorporate axle holes at the back of the model. They even include one of the axles that can go into one of these holes. What this means is that if you buy two copies of the set, you can align them back-to-back and create a complete pyramid. Granted, at $139.99 as the retail price, you might not go straight for this option. Just know that it is there, in case you want it. 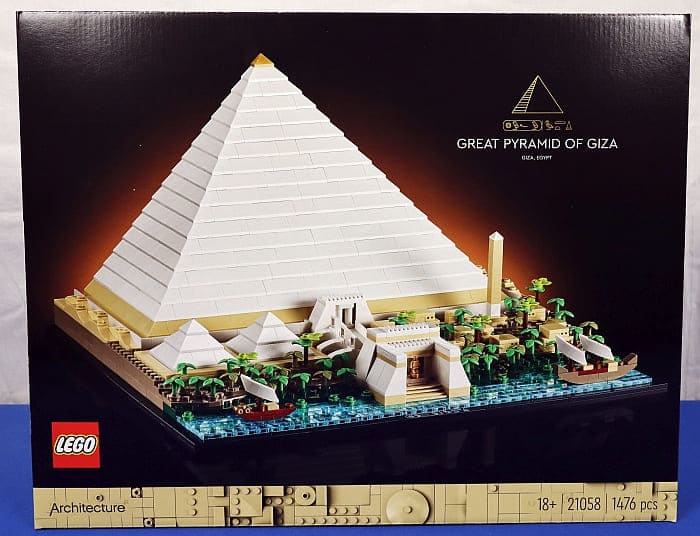 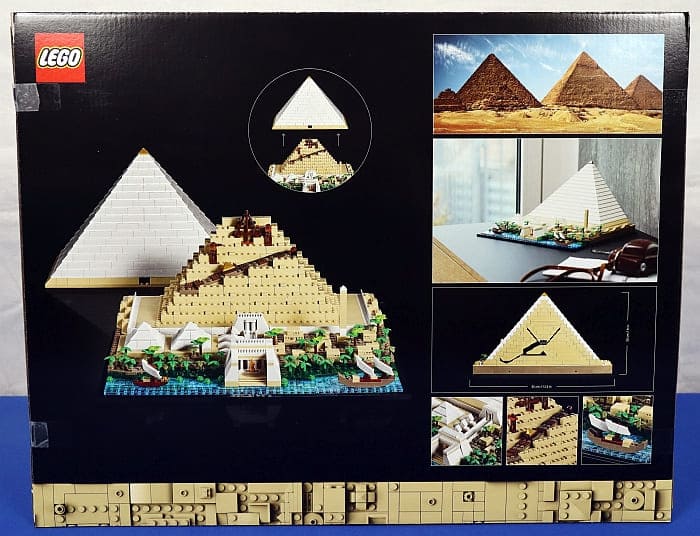 Next, the pyramid itself can be displayed in one of two states. The image on the front of the box is the completed monument. The white slopes leading up to the golden capstone represent its finished form. Unfortunately, this is not how it looks today. Much of the white limestone has worn away, leaving the tanner limestone that made up the majority of its underlying structure visible. 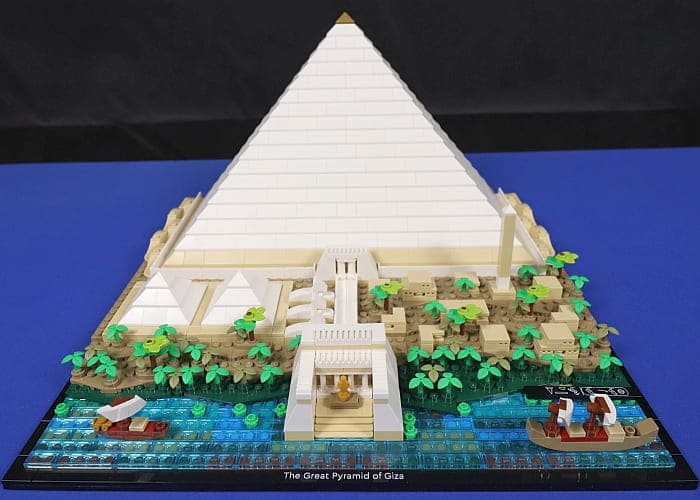 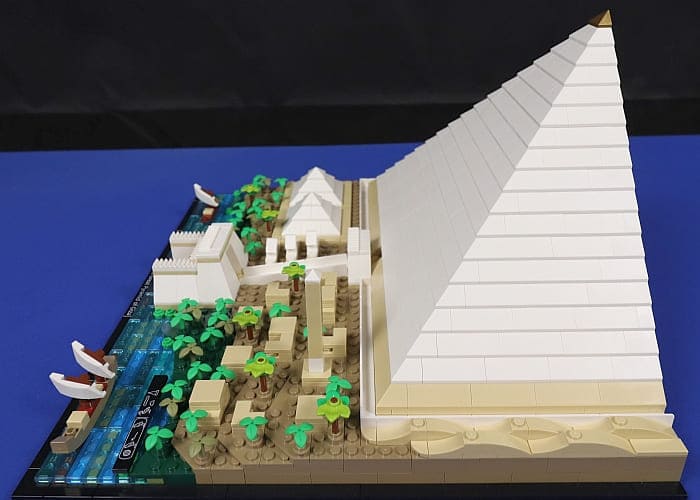 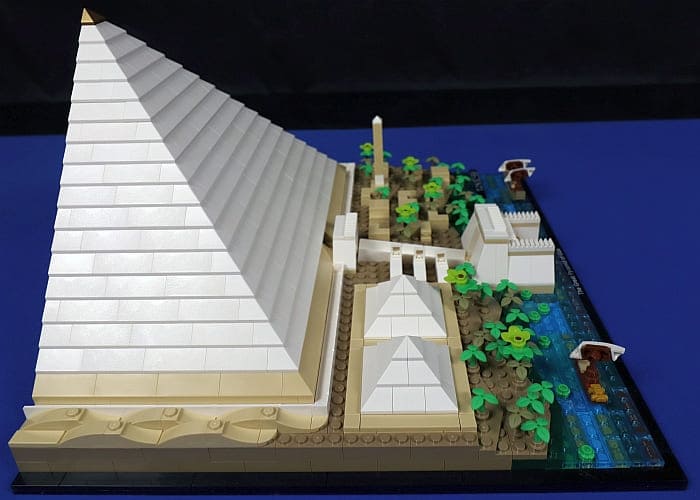 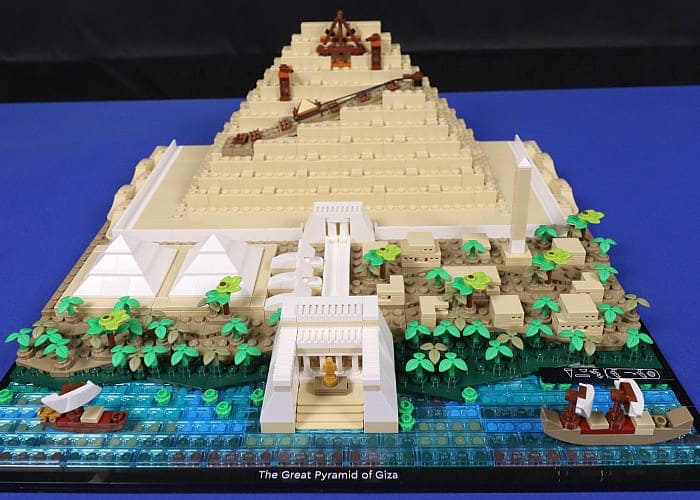 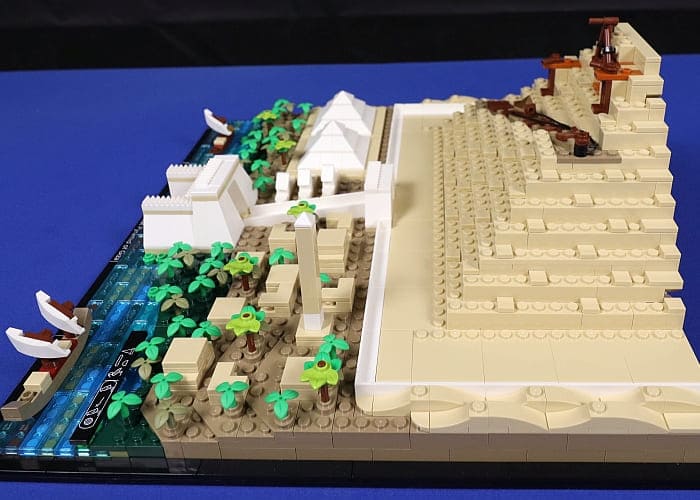 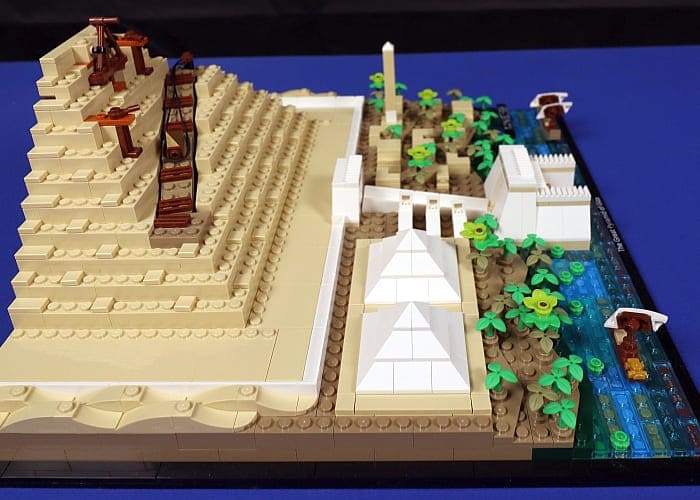 However, the present is not entirely left out. If you turn the model around you get a view of the pyramid in a sort of cross-section. There is a cracked jagged line that leads up to an unfinished tomb. The pyramid contains three tombs. The King’s tomb, the queen’s tomb, and an unfinished tomb that was discovered only in the last few decades. 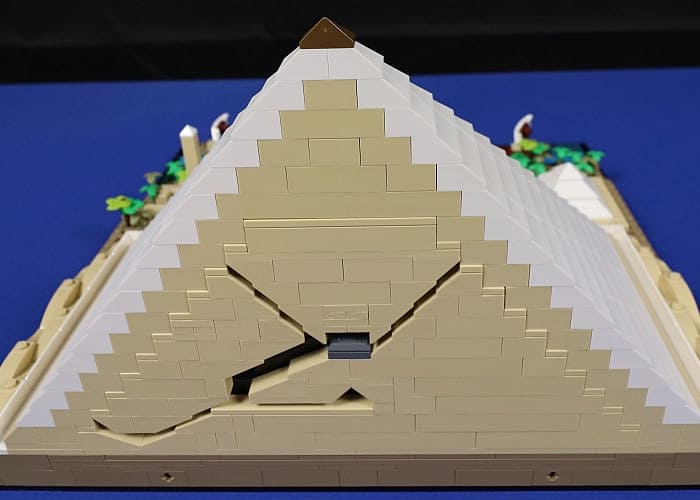 No matter how you position this model, it gives a rather robust number of options for display. This includes two different printed plaques to mount in front of the model. This is great for those who do buy two copies of the model and can use both plaques rather than just choosing a single one. 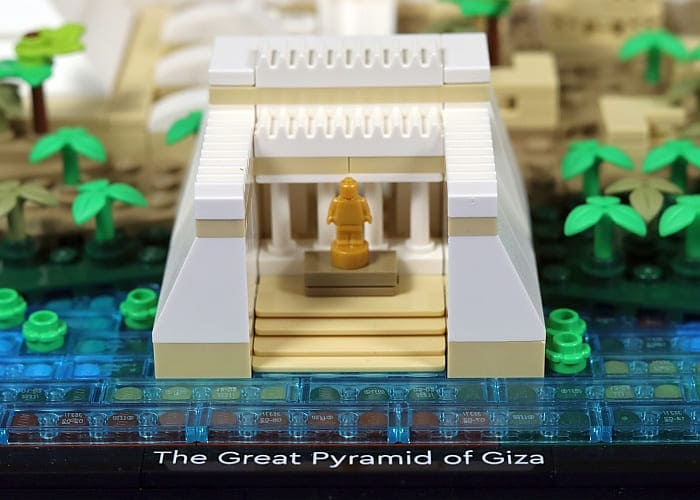 Generally, it is difficult to build a large shell that can fit over a model. The reason for this revolves around structural instability. However, the pyramid shape changes this issue by its own inherent strengths.

To make this work, the set utilizes stair elements and plates to act as a skeletal frame to build the pyramid shell on. In truth, this frame is extremely fragile. Many builders will have to stop and keep reattaching the frame as the shell takes shape. This is especially true in the early stages where the model has a degree of flexibility. 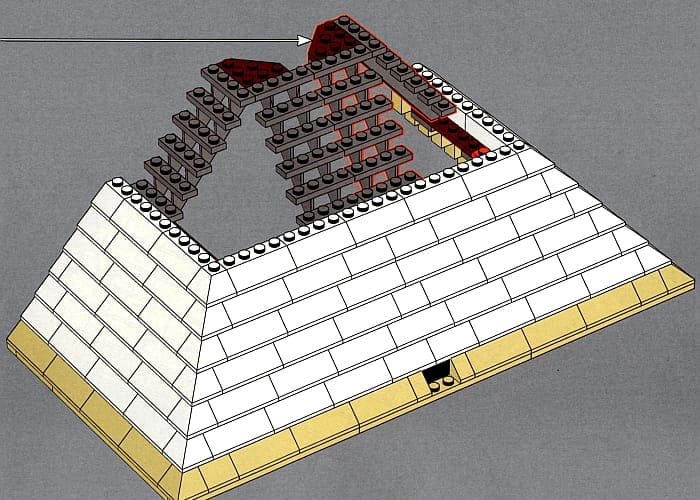 However, thanks to the pyramid shape, the outer shell reinforces itself. As the shape narrows, you not only interlock elements, but you tie the various sides of the pyramid together. This allows each side to help support the rest of the structure in the strongest way possible. Triangles, at their core, are fundamentally sturdy shapes while remaining simple.

Therefore, if you are planning to build a shell, for whatever reason, the best advice is to understand geometry. You don’t always have to use triangles, but carefully consider the shapes you do use. For the most part, you want shapes that can harden your structure by providing extra support. After all, there is a solid reason why the Great Pyramid of Giza is the only ancient wonder of the world still standing today.

Getting those fine details right in a LEGO Architecture set is really what makes each of the models stand out. You are already working with a micro-scale design, which makes detail work a bit tricky. So I was very surprised to see this set build stairs in such a way that most of the parts that make up the stairs aren’t even solidly connected to anything. They simply rest in place and are supported by their own geometry. The stairs in question are at the very front of the model, right in front of the statue. These steps are made up of nestled 1×4 panel elements. 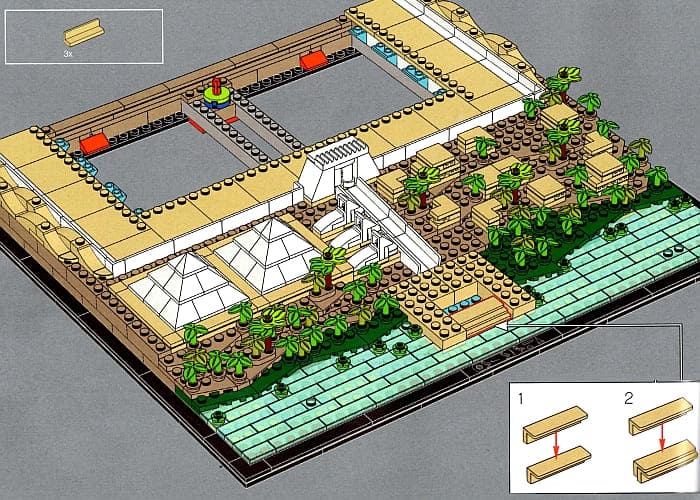 In order to understand this technique, you need a fairly detailed understanding of the math that is involved in pieces like these. Before I go step-by-step through this process, I want to cover a couple of measurements. First, a stud has 0.5 plate’s worth of thickness. A panel wall, like the ones in this set, is also 0.5 plates thick. A two-stud area is the same as five plates sideways. And finally, if you have one of those 2×2 jumper-plates with a single stud in the middle there is 1.25 plate space between the edge of a stud and the nearest edge. Oh, and just as a quick reminder, if you look down on a 1×1 square plate, it’s the same as 2.5 plates worth of thickness.

Okay, now let’s examine some parts! A 1×4 panel has a panel wall that is 0.5 plates thick. That means the sunken area measures two plates of thickness. So, if we turn the panel, we can rest the wall on something that is two plates tall, provided the top plate is a tile so we don’t run into the studs. This is the first loose panel. Next, we layer another panel on top of the first. Since it is raised up 0.5 plate’s worth of thickness above the first, it means we can support the underside of this panel with a stud, since it is also 0.5 plates thick. This is where that jumper shape comes into play. LEGO designers used the 2×4 modified plate which looks like two 2×2 jumper-plates glued together. But for simplicity, I’ll just call it a 2×2 jumper since more people might be familiar with that. 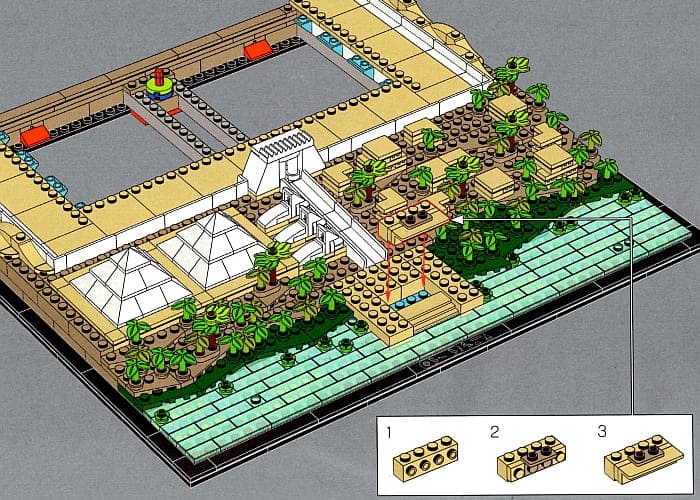 Remember, the empty space between the stud and the edge is 1.25 plate thick? This means the base of the first panel, which is one plate thick, has plenty of room to not run into the stud of the jumper. But the second panel does run into the stud, which is great since it acts as a support. Now we add a third panel and this is where all the numbers fit together.

The third panel is just resting on the other two with no real support. However, these three panels have covered three out of the five plates of thickness across the 2×2 jumper. That’s where we build from the other side of the jumper. Take a 1×4 brick with studs on the side and put it on a plate on the other side of the 2×2 jumper. This makes it four plates tall compared to the jumper. A layer of plates is added to the face of this modified brick along with a 1×4 panel of its own. This is added in and fits over the panel stack, locking it all into place.

You can even look at the front of the steps and kind of count how everything comes out to being four plates high. You have your initial plate and tile that the first panel rests on. That starts us off with two plates. Then, we have a total of four panel walls. Each of these adds 0.5 plates worth of thickness. So it goes: 2, 2.5, 3, 3.5, and finally four plates.

This has got to be some of the most finely measured building techniques I’ve ever seen in a model. All of it is just to create some basic steps that are mostly to scale with a micro-scaled model. Reproducing this is not that hard, but being able to understand the shapes on this level is what will allow you to come up with your own building methods. A good way to do this is to measure new elements you come across against thicknesses of bricks and plates. These are excellent rulers since nearly every part LEGO makes is based on the measurements of these core parts.

LEGO Architecture is still not a line for everyone. You tend to either need a strong personal connection with the location the model represents or you need to be an avid fan of LEGO building and all it entails. Plus, if you are a bit of a history buff, that can’t hurt either. 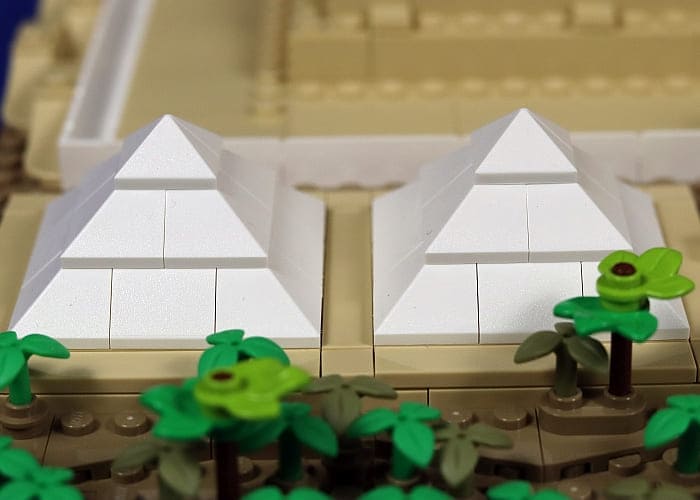 For that reason, if you fall into these categories, The Great Pyramid of Giza is probably the set for you. It does more than most LEGO Architecture sets while at the same time providing very interesting yet fundamental building techniques along the way. Given just how much precision math went into the construction of the pyramid, it is amazing to see the same type of knowledge incorporated into the set. 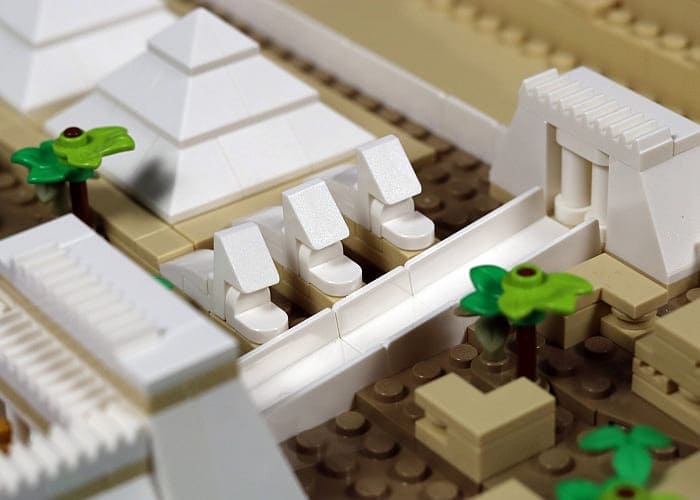 I would suggest for those looking to get into the LEGO Architecture line, this might not be the best set to start with. It does have a bit more of a play quality to it than others in the series, which may give you the wrong impression if you try a different model in the LEGO Architecture line up. Though, if you are a fan that has a personal connection to the pyramid, you are in luck. Overall this is an amazing model that does justice to the famous monument while also demonstrating some unique building techniques. Though, I must admit, buying two copies at this price point is a little hard to justify in my opinion.

Also, make sure to check out the accompanying video below where I dig into some of the historical elements found in the model. To my shock, the instructions did very little in regards to telling the history of the Great Pyramid of Giza. I hope to remedy some of that! If you would like to check out the set, it will be available from August 1st at the LEGO Architecture section of the Online LEGO Shop.

What do you think? How do you like the LEGO Architecture Great Pyramid of Giza? Is this a set you’re planning to add to your collection? And what do you think of the techniques we discussed here? Feel free to share in the comment section below!