LEGO has been releasing mini models of their stores since 2012. Some of these sets are only available as promotional items when new stores open, and others are available for purchase at official LEGO stores and sometimes even the Online LEGO Shop. 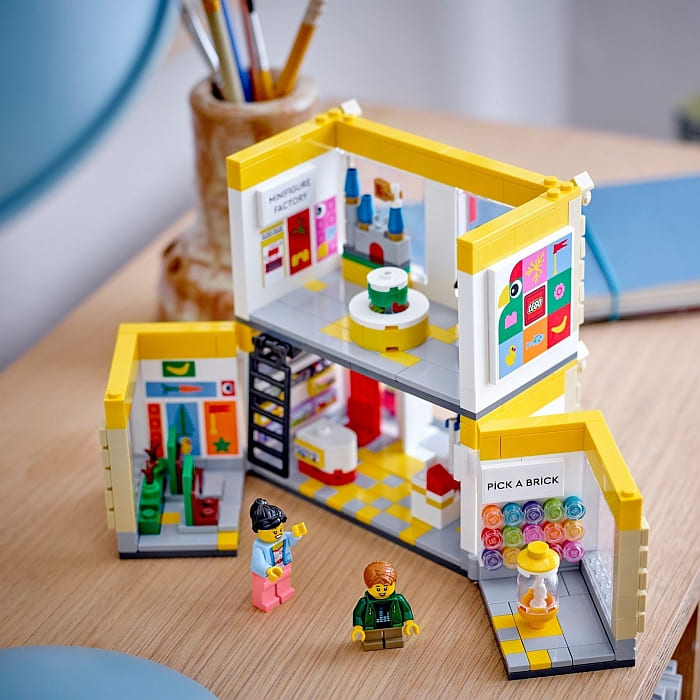 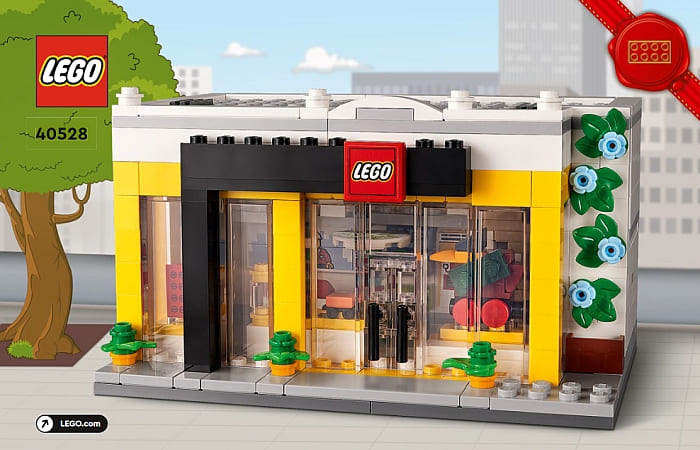 These sets usually include standard features of real LEGO stores like the Pick-A-Brick Wall, mini versions of LEGO set boxes (decorated with stickers), a check-out counter, and various store decorations, like the famous Wooden Duck in the most recently released #40528 LEGO Brand Retail Store. This most recent set also features a stockroom and a loading bay at the back. And the ivy growing up on the side of the building is a nice touch. Although these sets are only available at store openings, they usually don’t contain special parts, so if you would like to build them, you could just download the instructions to copy some of the details or even the whole set. They provide a nice template for adding a LEGO store to your city. 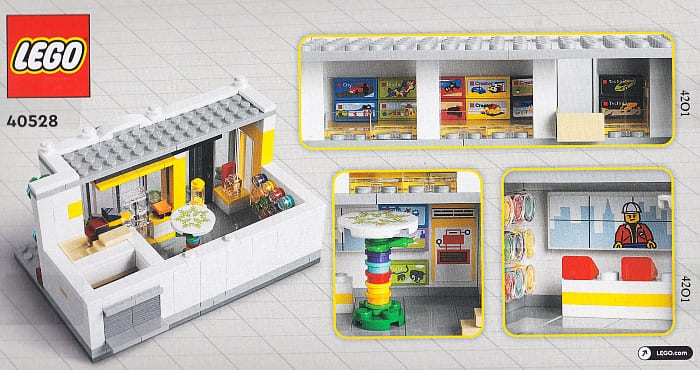 A larger set that is also now available at official LEGO stores (but is not listed at the Online LEGO Shop as of yet) is the #40574 LEGO Brand Store. This 541-piece set costs $36.99 and features a LEGO store with quite a few modular features and a host of tiny store displays and fixtures. 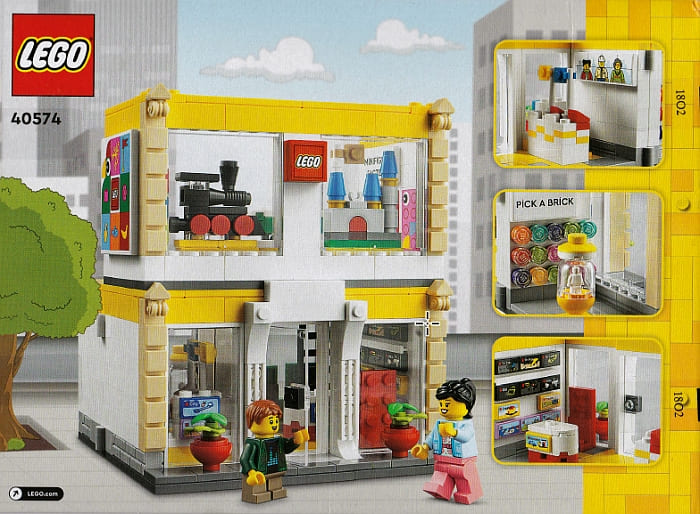 The store is two stories tall, and minifig shoppers have to climb a ladder to get to the second floor – which is a little unusual. The bottom floor can be folded out for more access and features a Pick-A-Brick Wall, shelves with mini versions of LEGO sets, a check-out counter, and more. The decorations on the set boxes and walls are all stickers and add nice and vibrant details to the store. The second floor features a couple of display models (train and castle), a building station, as well as more sticker decorations on the walls. 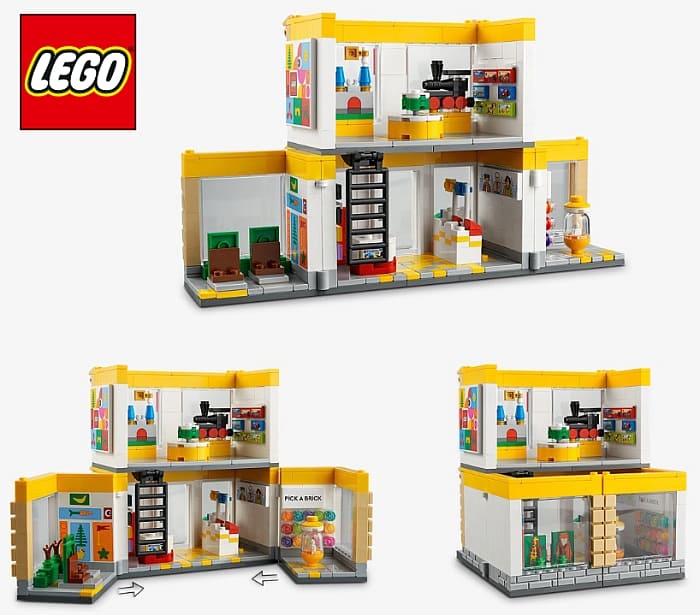 The set comes with two minifigs. The female has a very pretty and still rare torso print and coral-colored legs. The boy comes with short legs and a cool hoodie that’s not new but still awesome. It’s too bad that a store employee minifig wasn’t included as those are hard to find. 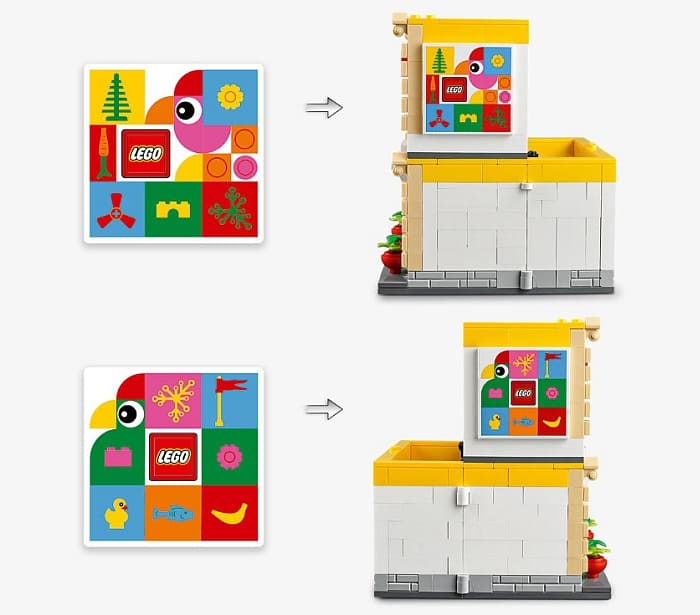 It’s worth noting that this set is 16-studs wide, so it could be a good starter set right out of the box for building a full-size LEGO store in Modular Building style. Or, you could combine some of the features of this set with the features of the promotional sets to create your own design. 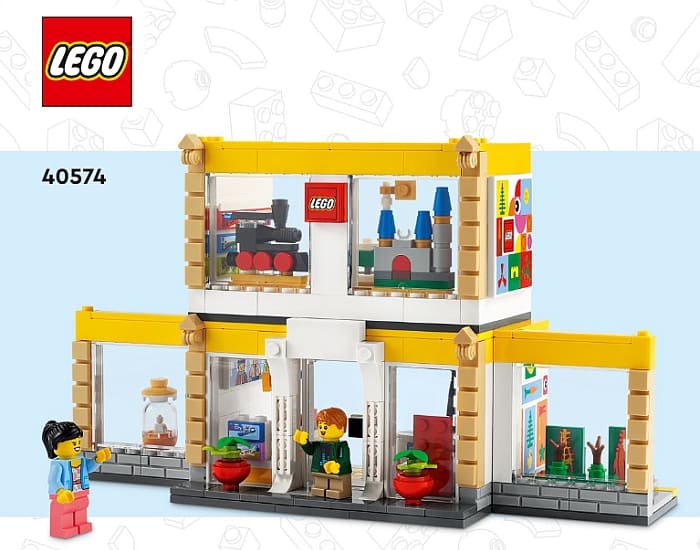 What do you think? Do you have any of the LEGO Brand Store sets? Have you added them to your LEGO city, or used them to create a larger building? Feel free to share and discuss in the comment section below!