When I first heard there were going to be LEGO Lord of the Rings BrickHeadz, I was stoked. I’ve now collected over a hundred LEGO BrickHeadz characters, and I don’t see myself stopping anytime soon. As I have built so many, I’m familiar with the building techniques used for the sets, and I can focus on the finer strengths and weaknesses of each model. So without further delay, let’s see what kind of adventures the LEGO Lord of the Rings BrickHeadz characters take us!

First up are the two characters that are central to the story. Both are holders of the Ring of Power. One is a symbol of a halfling warped by the ring’s influence, while the other is the hope that the halflings offer the world of Middle Earth. Needless to say, these are some of the most iconic characters in The Lord of the Rings. 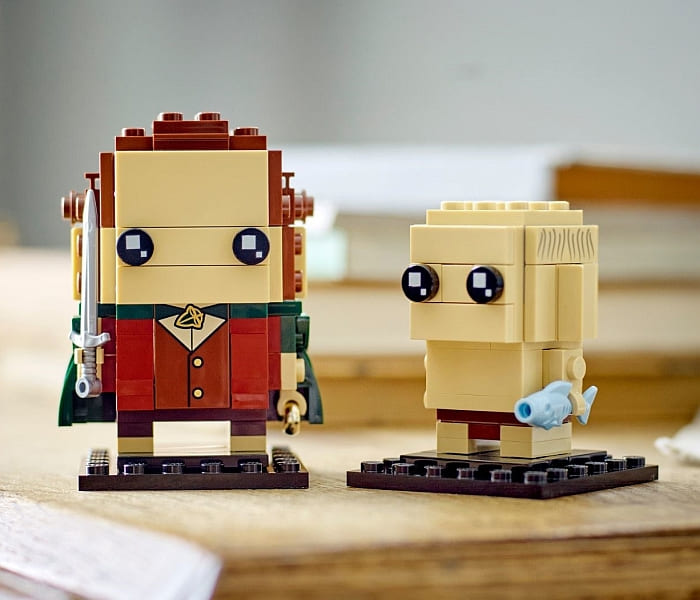 In my opinion, this set is a bit of a mixed bag. I do really appreciate these characters being made, but I did find Gollum to be downright dull to build. Not only is he smaller scale, but his only distinguishing characteristics are a few printed 1×3 tiles around the top of his head. In all fairness, the most interesting aspect of Gollum’s form is his wiry misshapen body. Unfortunately, in BrickHeadz, that is one aspect that had to be abandoned. All this model really captures is that Gollum is small and wears a loincloth. Though, I do like the fact that he comes with a fish. 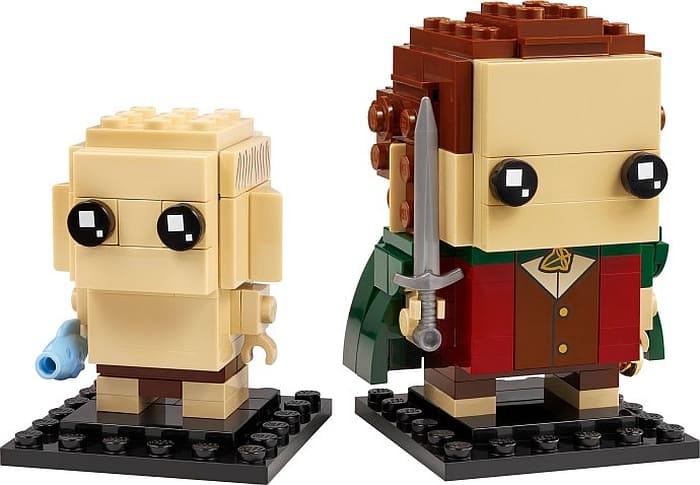 Frodo, on the other hand, is a much more interesting build. Being a halfling, he is built with slightly shorter legs two plates instead of the standard one brick). What is really interesting in this model is the overlapping techniques. One place we see it is on the printed 2×3 tile of the torso. It is an odd size so the face overlaps it, covering part of the top of the tile in order to accommodate an oddly shaped piece. Another place where overlapping is used is on the cloak. Most of the time, capes and cloaks don’t hang over the hands. But this one does, and it gives the character some rather interesting depth. Throw in the Ring of Power and a sword, and Frodo is ready for an adventure.

#40631 LEGO LORD OF THE RINGS BRICKHEADZ GANDALF THE GREY & BALROG

I must admit, out of the three sets, this is my favorite. LEGO designers managed to pick some very interesting-looking characters to portray. The connection between these two is, of course, at the end scene of the Mines of Moria. Gandalf the Grey holds off the foul beast to allow the rest of the party to carry on. 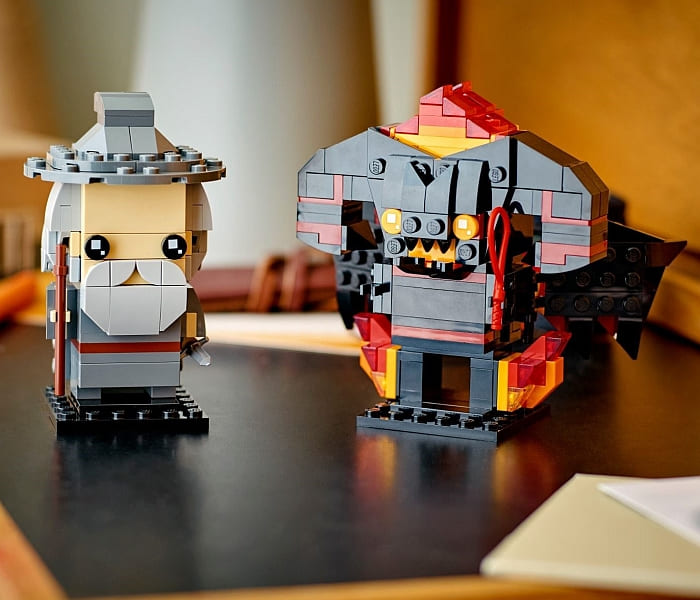 Gandalf the Grey’s broad-brim hat makes him stand out among the dozens of LEGO BrickHeadz characters. And that’s saying something since he’s otherwise mostly in muted colors. Even the beard offers a unique shape to the character. Add a staff, and he’s one wizard that shouldn’t be messed with. 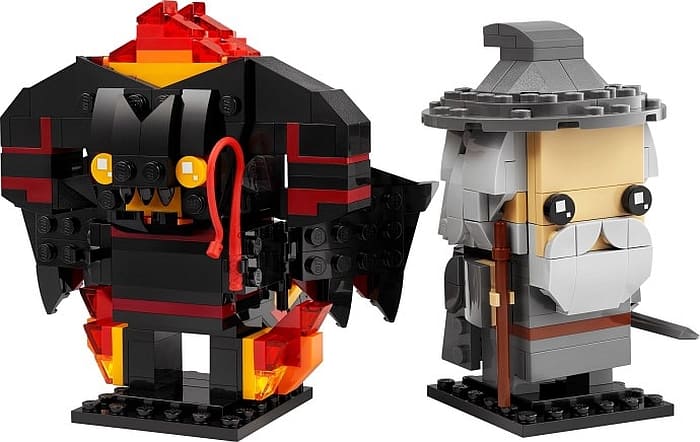 But what I was really looking forward to building is Balrog. Nearly every BrickHeadz that was made for a non-human character has been cute. The Balrog breaks that mold and goes straight into ferocious. From its angular face and horns to the various flames licking across its body, it is a really menacing character to look at. It also has a fantastic presence. Its long adjustable tail, movable wings, and slightly taller-than-average height give it an almost looming quality. Finally, put a whip into its hands and you got the first BrickHeadz that I’d call a real horror. And that’s saying something since I also built the #40549 LEGO BrickHeadz Demogorgon from Stranger Things.

For those looking for a slightly more romantic bent, this might be the set for you. In The Lord of the Rings, the only relationship I can call truly romantic is between Aragorn and Arwen. Both BrickHeadz characters are done up regally with circlets. However, I must admit they aren’t equal in terms of build quality. 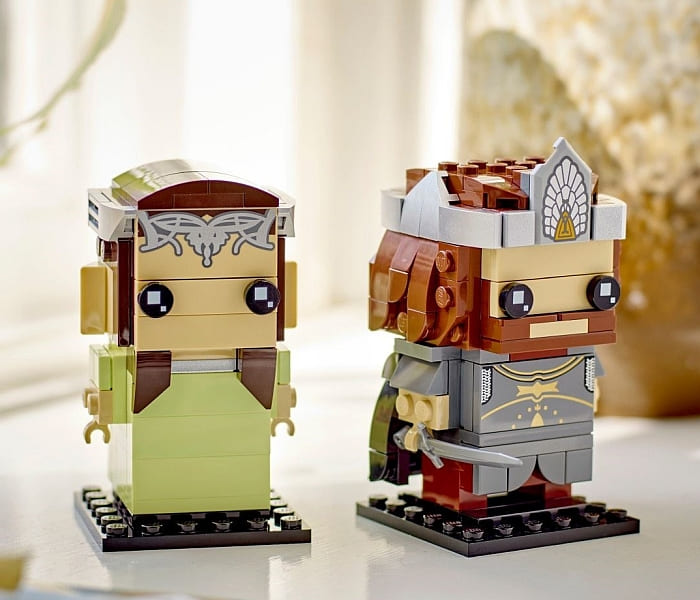 Normally, I get more excited about female BrickHeadz as I find that LEGO often puts a lot of interesting building techniques in women’s hairstyles. However, apart from some of Arwen’s hair falling over her shoulders and a tiara built into her hair, she is surprisingly plain. Her dress is a very bright light-green, which is not a common color, but it has little to no adornment. Unfortunately, this makes it look as though she has a head on a slightly misshapen block of green. She does have a printed tile on her forehead to give her tiara some much-needed bling, but overall, this was a less-than-exciting character to build. 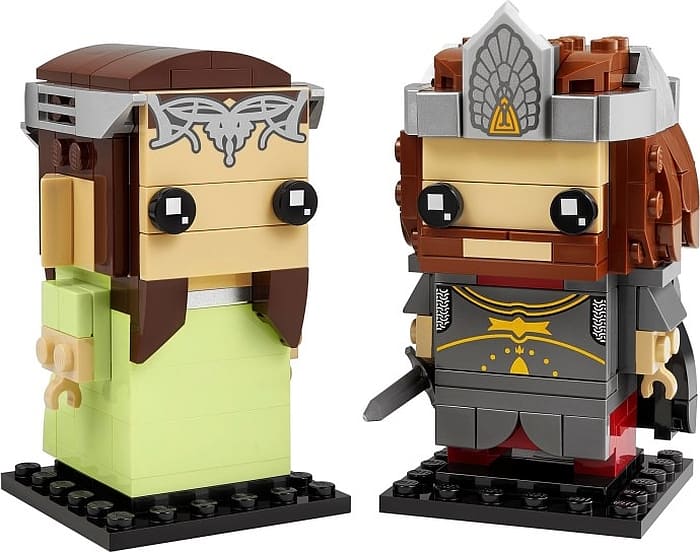 Then we get to Aragorn, and the difference is like night and day. His hair has dimension, his cloak has dimension, and even his crown stands out proudly from his head. On top of all these features, LEGO designers gave him interesting facial hair that makes him have a stronger-than-usual jawline. His armor is a printed piece and it even extends over the front of the legs to add extra detail. A sword is also included with this character. Aragorn is most likely going to be the reason anyone will buy this set.

The focus of these sets seems to be pairs of characters that have some sort of connection to each other. I know many Lord of the Rings fans will just buy all three and be sad there are not more of their favorites, but LEGO has, in the past, oversaturated other intellectual properties, and perhaps if these sell well then we might see more in the future.

From the perspective of building techniques, only Gandalf the Grey & Balrog is a solid experience through and through. The other two sets I’d say are only halfway interesting to build. So, someone who is passingly interested in the sets and only plans to pick up one might keep this in mind.

With that said, these do make interesting sets that you and a friend or family member can build together. The novice builder could tackle the simpler Gollum or Arwen, while the more advanced builder puts together Frodo or Aragorn respectively. That’s not to say BrickHeadz characters are hard to build, but rather you might find something that could keep your interest.

Personally, I’m an avid collector of BrickHeadz, and the Lord of the Rings characters are my first opportunity to get BrickHeadz characters that are quasi-medieval (one of my favorite themes). Overall, these would be relatively average when compared to all the BrickHeadz available to date. That’s not good or bad, but rather a suggestion that you should like The Lord of the Rings first and be a LEGO builder second. The sets will be available starting January 1st at the LEGO BrickHeadz section of the Online LEGO Shop.

What do you think? How do you like the LEGO Lord of the Rings BrickHeadz? Are you planning to get any of the sets? Feel free to share and discuss in the comment section below!